Obama: "I am still fired up and ready to go" 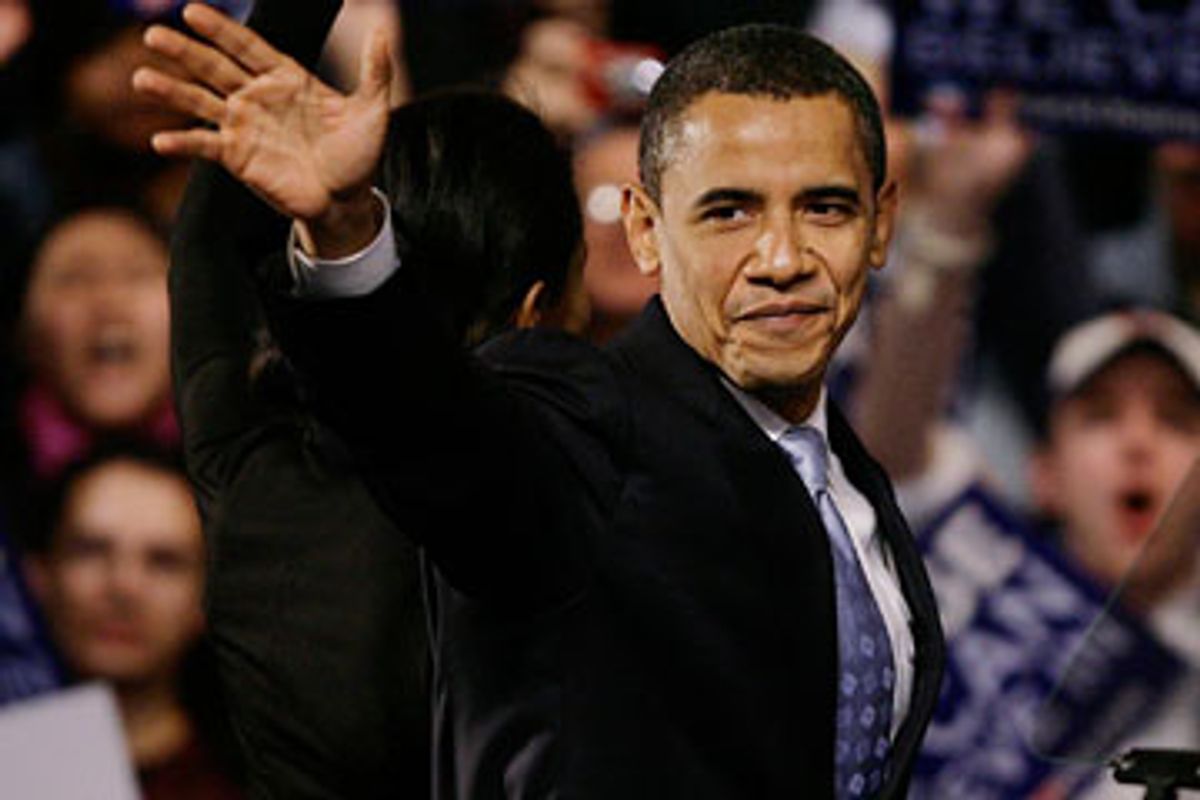 Last week Iowa was fired up for Barack Obama, but Tuesday night the people of New Hampshire sounded off with a very different echo: Not all Democrats are ready to go for the senator from Illinois.

A string of surveys in the days leading up to the New Hampshire primary showed double-digit leads for the man who five days earlier swamped Hillary Clinton and John Edwards with a flood of new, young and independent Iowa caucus-goers. But after a week's worth of rafter-shaking auditorium rallies across New Hampshire for Obama, Clinton's shocking victory forced him to reframe his message of hope to a large degree as a message of recovery.

"I am still fired up and ready to go," Obama told a crowd of disappointed supporters at Nashua South High School. For all of his talk about change, Clinton's victory brought a jolting and fundamental shift to a race that, only hours earlier, many expected would reaffirm the emerging story of a new and unstoppable political phenomenon.

Instead, the soaring rhetoric, fist pumping and smiles from Obama were tempered by a concession speech and the painful realization that Clinton's victory provided her a comeback similar to the one her husband used 16 years ago to revive his embattled presidential campaign.

"We have been warned against offering the people false hope," Obama told the audience, some of whom began lining up seven hours before the doors opened for the event. "But in the unlikely story that is America, there has never been anything false about hope."

That was about all the talk of hope Obama could offer, however. Speaking with the intention of bucking up his backers, Obama converted a secondary theme from his standard stump speech -- "yes, we can" -- into a refrain of reassurance for his campaign.

Obama staffers, usually at the ready, were nowhere to be found after the event, leaving media pundits to puzzle over just went wrong. The outcome seemed to catch even the Clinton camp off guard; Clinton national campaign chair Terry McAuliffe had spent much of the day on television and radio bracing for defeat -- complaining about the short time period between the Iowa caucuses and the New Hampshire primary, and reminding skeptical listeners that there were another 27 contests ahead in the coming month.

But the explanation of what went wrong for Obama was, in the end, not all that surprising. Obama lost among women by 13 points -- 47 percent to 34 percent -- and was beaten by decisive margins in the state's two largest cities, Manchester and Nashua. With high turnout among women and in that pivotal I-93 corridor, the advantages among men and younger voters that Obama used to win in Iowa were not enough here.

On an unseasonably warm Northeastern January day, women accounted for almost three of every five votes statewide in a high-turnout election, and the working-class voters among whom Clinton enjoyed large leads throughout 2007 finally came out for her. The fact that Obama and Clinton split late-deciding voters fueled the theory that a widely broadcast moment from Monday, when Clinton broke down and got emotional at a public forum, helped her break through with voters. Some also wondered if John Edwards, who finished a distant third in New Hampshire with 17 percent, created sympathy for Clinton after her emotional interlude with a brusque remark pointing out that being president is a tough job.

The scene in Nashua Tuesday night offered a stark contrast to the high-energy events in the five days since Obama's Iowa win. Shocked Obama supporters watched Clinton open a lead of 3 to 4 percentage points in the early-reporting precincts, even though rumors that Obama had won the exit polls kept the networks from calling the race either way.

Around 9:30 p.m., the crowd at Nashua High School began to cheer as Obama closed the margin to 2,108 votes, with 43 percent of precincts reporting. Familiar chants of "Obama! Obama!" and the signature "fired up, ready to go!" call-and-response rose spontaneously from the crowd. But within minutes Clinton's lead had doubled, dampening the enthusiasm.

Instead of bringing a confident, smooth transition by the Illinois senator from insurgent to certifiable front-runner, the evening's results seemed to put big pressure on the Obama camp. "You can be the new majority who can lead this nation out of a long political darkness," Obama urged his supporters. He also tried to shift attention from the rather stunning outcome here to the approaching contests in Nevada and South Carolina. He cited key cities in each of those states, noting "the struggles of the textile worker in Spartanburg are not so different than the plight of the dishwasher in Las Vegas." Earlier Tuesday, some analysts speculated Clinton might have to skip Nevada and South Carolina in favor of gambling on a big-state strategy focused on Feb. 5. Not so any longer.

"We will remember that something is happening on the streets of America," Obama continued, "that we are one people, that we are one nation, and that together we can begin the next chapter in America's story with the three words ... Yes, we can."

But when it came to chalking up a clear victory Tuesday night, Team Obama simply could not.