Why I'm still not for Hillary Clinton

Women voters rallied en masse for her -- but she has run as a stereotypical male and represents the same old cowardly Clintonian politics. 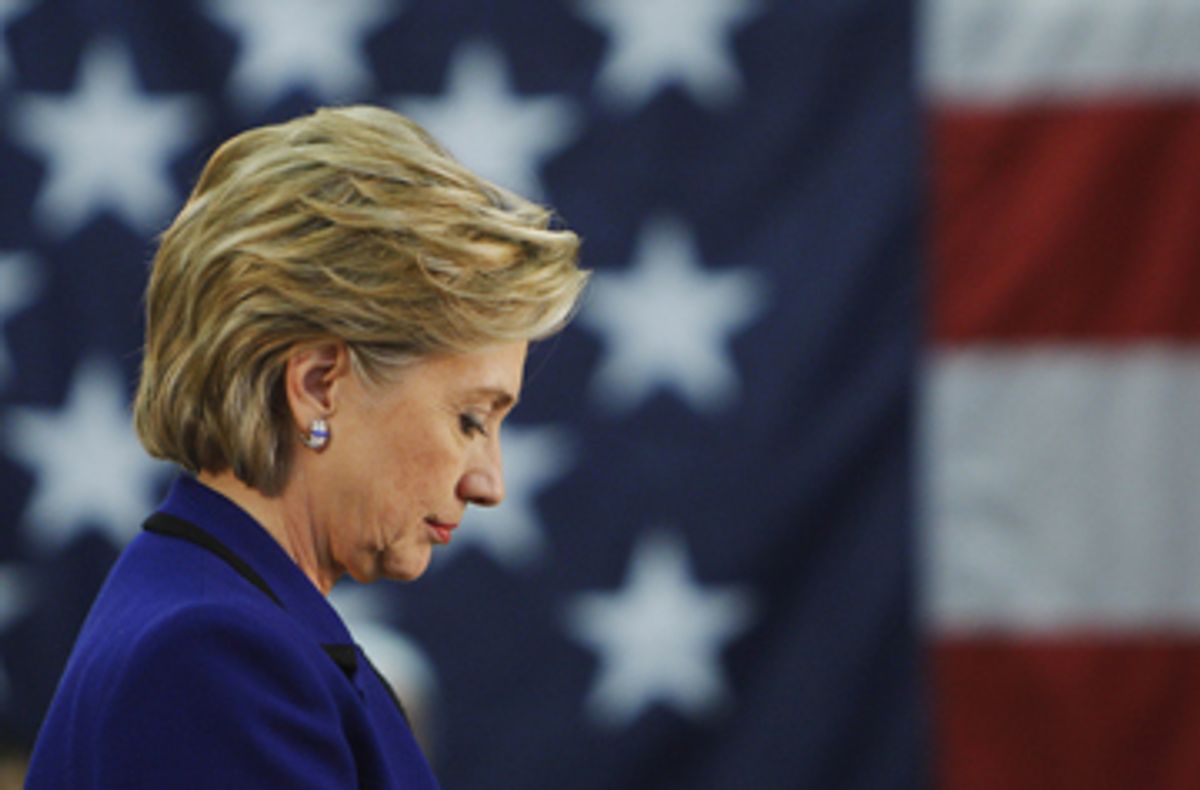 In the wake of Hillary Clinton's surprising win Tuesday and all the wrongheaded punditry leading up to it, there has been much discussion about why women voters rallied en masse for her in New Hampshire. Some believe she benefited from a powerful backlash against her many eager naysayers in the media. But whatever the reason for her campaign's resurgence, I still don't buy Clinton as the women's candidate.

I'm a lifelong feminist activist. In this crucial election, I am supporting John Edwards, whose economic policies I think will best serve women. Barack Obama is a close second, with Hillary Clinton a distant third. At first, as a feminist, I felt strange, almost embarrassed not to support Clinton, but it wasn't a tough decision. I did some soul searching, and in the end there were too many issues of principle on which she was willing to compromise. Her commitment to practicality over principle made it hard to be enthusiastic about her candidacy.

At the same time, watching Clinton in Iowa and New Hampshire was a roller-coaster ride -- there were moments when I just wanted to throw in the towel and support her, those flashes of humanity and passion, the confidence she expresses in her record, the reality that she probably is the good person her husband says she is. I imagine her frustration with people like me who sell her short and will not settle for the conventional wisdom of what a woman has to do to get elected and trust her. And then she would frustrate me with her almost absolute inability to understand that being a leader is much more than an exercise in competency; it is the ability to capture people's imaginations and make them believe that there is indeed hope. The low point was her dismissal of Obama's and Edwards' visionary platforms as false hopes. Jung's bad mother wagging her finger at the boys who dared to promise the American people more than they could deliver was too much.

I contrast the closing speeches from New Hampshire: Obama's three words -- "yes, we can" -- and Clinton's heartfelt claim of having found her voice, an unspoken acknowledgment that she had to learn and she learned it. One goes to bed with the feeling that the next six weeks will include a national opportunity for all but the far right to take apart questions of race, gender, class and political integrity. In a way, it is the first 21st century election. Will Obama force Clinton into the new millennium? Can she meet my expectations?

Then her record enters my consciousness: her votes on Iraq, the Patriot Act and the Iranian Revolutionary Guard.

I wonder if I am, as antifeminists are constantly taunting, one of those women who is jealous of other women? Am I harder on women than on men? After all, the first qualified woman who becomes president is not likely to be everything a feminist would like her to be. Am I just not practical enough to hold my nose and go with a qualified woman? Clinton is to be respected for her intelligence, knowledge of the issues and consistent work for social justice. There is no one best person to be president, and there is no doubt in my mind that, if elected, on most issues she will make good decisions, do the best that can be done in difficult circumstances and, as would Edwards and Obama, work to change some elements of the debacle of the Bush years.

But her approach to Iraq leads me to think she would more quickly and inappropriately use military power than other Democrats, and that is impossible to ignore.

The decision about whom to support is also based on more subtle issues of character, a sense of where the candidates will lead us and how much of a socially transformative vision for America they have. Being a feminist means not only supporting policies that improve women's lives, but that lead to a new understanding of women's and men's nature, identity and role in the world. It means an unrelenting attention to the questions of exclusion and marginalization, and to leveling the playing field. Asking whether Clinton is that person is not just a fair question, it is the feminist question. In answering that question, the history of centrist Democrats and Clintonism must be confronted.

Now, I've never been a centrist Democrat and everything I have seen of Clintonism and the Democratic Leadership Council confirms that women are far down their priority lists. But there must be some small space in the political world in which women are important. It is also not to say that Clinton doesn't care about women -- of course she does, and she has supported and will support many policies that improve women's health, employment and education. Perhaps one hears so little of that commitment on the campaign trail because it is assumed that the woman candidate does not have to talk about those issues. But whatever the reason, there is no evidence that Clinton's feminist history currently influences her thinking about women, or that it is any further advanced than Obama's and Edwards' thinking.

The sad fact is that Clinton has felt compelled to run as a stereotypical male. In her own mind it is only a certain kind of man who is qualified to be president and she will be that man: tough on everything from war, flag burning, kids' access to video games, illegal immigrants and Palestinians. She has missed the opportunity to talk about what it really means for women to be equal in this country. She has shown no interest in using her extensive international experience to push for more women in party leadership, state legislatures and even the Senate. A woman candidate who considered her gender a strength (as opposed to something she needed to overcome) would announce a series of measures specifically designed to ensure that women's needs and rights were at the forefront of her agenda.

For example, she might begin by following the European example and create a Cabinet post on women. In addition to outlining her foreign policy in Foreign Affairs, she might write about women from a thoroughly modern perspective. As important as they are there is nothing new about talking about issues such as violence against women or research on women's health issues or funding family planning at home and abroad. We need a candidate who advocates for the economic benefits that women all over Europe -- and increasingly women in developing countries -- have: better support for the retirement of women who do not work outside the home, paid family and medical leave, expansion of Social Security benefits to spouses (mostly women). And we need a feminist candidate for president who is not afraid of issues such as gay marriage, adoption and America's changing attitudes toward women's sexuality and all sexuality.

When John Edwards stepped up to the podium to concede victory to Barack Obama, he said, "The one thing that is clear here in Iowa is that the status quo lost and change won." I do not want a feminism that is part of the status quo, and so I do not want the first woman president to be a Clintonian. Every time Hillary Clinton puts on the mantle of the Bill Clinton presidency and reminds us of how important it is to be practical and work with the other side to get things done, I think of every cowardly practical choice that Bill Clinton (or should I say the Clintons together) made. The "don't ask, don't tell" sellout of gays in the military; the abandonment of Lani Guinier; a failed healthcare reform package that would have sacrificed women's reproductive health to the Catholic Church's demands as moral arbiter; a welfare reform bill that actually hurt poor women and their families; and presidential approval of a permanent ban on Medicaid funds for poor women seeking abortions.

The women's movement, along with other progressive movements, did little to challenge the Clinton administration to live up to its campaign promises. And now it seems that the longtime women's movement is falling into the same trap over Hillary Clinton's candidacy. Just read the feckless and stale defense of Clinton's record on the war posted on the National Organization for Women's Web site to get a sense of how willing some in the feminist establishment are to defend any woman, regardless of her track record.

But some women aren't buying it. We'd like to see a woman president, but more than anything we want to be able to say at the end of the first woman's tenure in the highest political office that it really mattered. That the first woman president did things no man would have done, that feminist values were at the core of her decisions -- and that the country was on the road to further transformation.