Larry McMurtry's "Lonesome Dove" may have been the best TV western ever made. Can his new CBS miniseries "Comanche Moon" shine as bright? 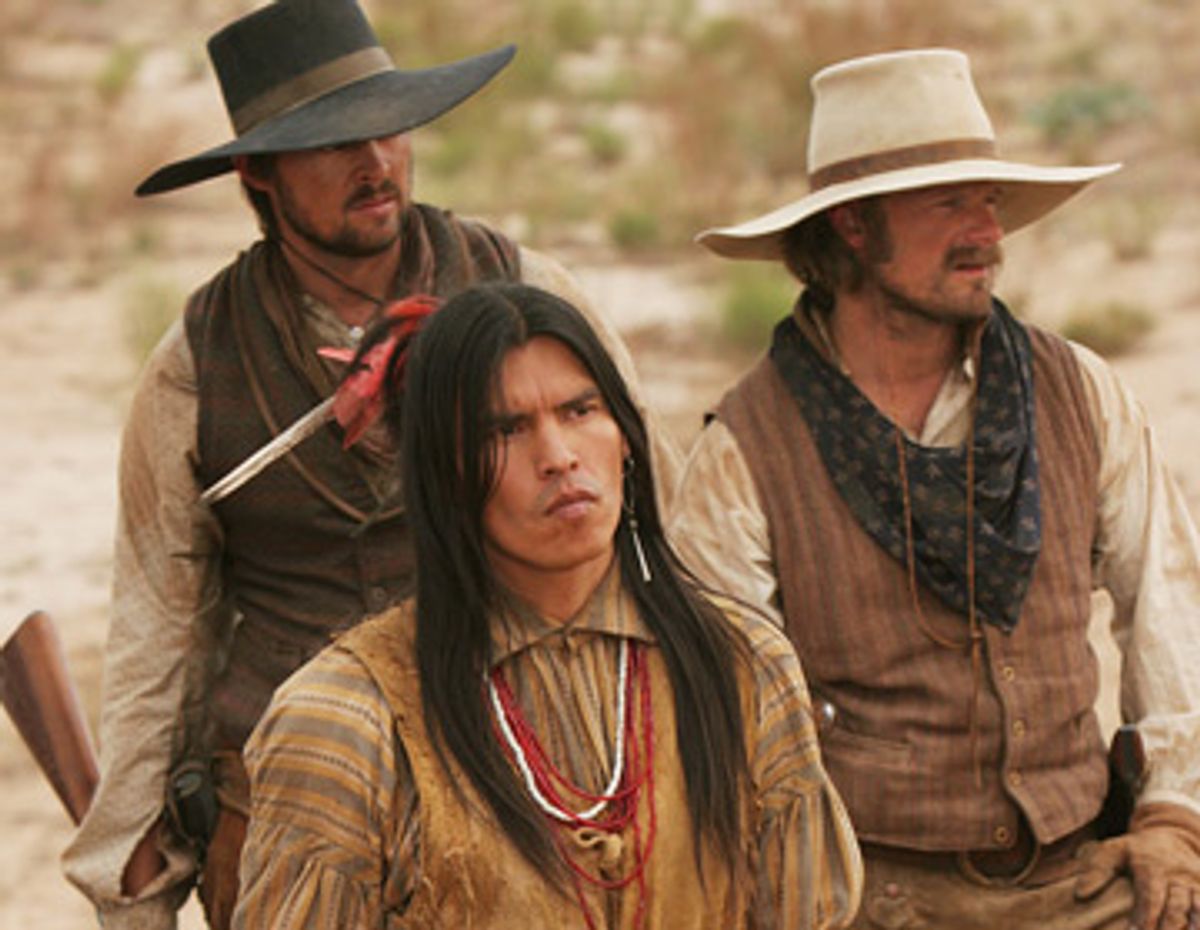 All truly great westerns pretty much commit themselves to one of two themes: the dizzying promise of adventure for pioneers -- let's use Howard Hawks' "Red River" as an obvious example -- or nostalgia for the end of an era, as with "Shane." (Only a handful of books and films, most notably the greatest of all western fictions, Thomas Berger's "Little Big Man," have managed to incorporate both themes.)

Larry McMurtry's Pulitzer Prize-winning novel "Lonesome Dove" fits, though somewhat uneasily, into the latter category. McMurty's two greatest characters, the grizzled Texas Rangers Woodrow Call and Gus McCrae, lament the passing of their Wild West and try to reclaim their youth with a cattle drive. What elevated McMurtry's novel over countless pulps with similar sentiments was its insistence on telling a heroic saga without the haze of romantic myth. Or, as he explained in his memoir "Walter Benjamin at the Dairy Queen" (1999), he wanted "Lonesome Dove" to "demythicize the West." Instead, he thought the book "became a kind of American Arthuriad," reinforcing the very notions that he had set out to subvert.

I don't think that's what really happened; I think that perhaps McMurtry's characters were more heroic than even he realized. Call and McCrae were modeled on the real-life men who inspired the myth in the first place, and McMurtry depicted them without the clichés of western fiction. In "Walter Benjamin," McMurtry called himself "one of the few writers who can still claim to have had prolonged and intimate contact with first-generation American pioneers, men and women who came to a nearly absolute emptiness and began the filling of it themselves." More than just about any other novelist writing about the frontier, McMurtry was able to look upon his ancestors' exploits with both nostalgia (which drew in lovers of the western genre) and skepticism (which brought in readers like me).

The 1989 miniseries made from "Lonesome Dove" isn't merely, as many call it, the greatest TV western ever made, it is flat out one of the greatest westerns ever made, providing what I would argue were career-defining roles for Tommy Lee Jones and Robert Duvall as Woodrow and Gus. That "Lonesome Dove" isn't instantly recognized as simply a great western is due largely to the director-worship snobbery of most film critics. Simon Wincer's career has mostly been spent as a TV director, but if you played "Lonesome Dove" for an audience of Martians along with Eastwood's "Unforgiven" and Costner's "Dances With Wolves," I'd bet they would prefer "Lonesome Dove" as much as I do. In fact, the film of "Lonesome Dove" is one of those rare movies that is just about exactly as good as its first-rate literary source, mostly because it had the right actors and stuck to the novel.

Why, then, doesn't the new six-hour miniseries, "Comanche Moon" (airing on CBS in three parts on Sunday, Jan. 13; Tuesday, Jan. 15; and Wednesday, Jan. 16, at 9 p.m. EST), also directed by Wincer from McMurtry's prequel novel, move me as much as "Lonesome Dove"? This production has the advantage of a screenplay by not only McMurtry but also Diana Ossana, a team that has produced one superb western novel, "Zeke and Ned," and an Academy Award-winning screenplay for "Brokeback Mountain." It also has some fine actors, particularly Steve Zahn as the young Gus, and Val Kilmer, looking as if he's having more fun than he's had in years, as Inish Scull, a Yankee-born Ranger captain given to spouting epigrams from the classics. There's also Wes Studi doing his usual effective turn as an embittered tribal chief, and Adam Beach as Blue Duck, the character who turns into the renegade played by Frederic Forrest in "Lonesome Dove." (Beach, who played Ira Hayes in "Flags of Our Fathers" and an Eastern-educated Indian in last year's "Bury My Heart at Wounded Knee," seems liberated by getting to play a bad guy for a change; it's a role that 10 or 12 years ago would have gone to Wes Studi.)

Yet, despite the production's adherence to the source material -- or maybe because of it -- "Comanche Moon," for all its large-scale set pieces (most notably a sweeping raid by the united Comanche tribes on the city of Austin), doesn't draw you into its world the way "Lonesome Dove" did. For one thing, the story's two main plots, the Rangers' ongoing conflict with the Comanches and their pursuit of a demonic Mexican bandit (played by Sal Lopez), never seem to mesh. The latter, which takes up almost half the story, meanders to the point of absurdity, and the bandit, Ahumado, who keeps his prisoners in snake-infested pits or hanging from cages on the side of a mountain, never rings true. McMurtry may have more firsthand knowledge of the people who lived on the Texas frontier than I do, but I know an anachronism when I see one, and Ahumado seems more like a drug dealer in a Robert Rodriguez movie than a bandit on the pre-Civil War Mexican border.

The real problem with the series, though, is one brought over from the novel, namely that "Comanche Moon" never really finds its own voice. It's OK for "Lonesome Dove" to be permeated by a sad, elegiac tone -- the story thrives on it. But in "Comanche Moon," set nearly two decades earlier, nearly everyone already seems weary. Bad as things were for the Indians, one might expect the whites to reflect the vigor and exhilaration that went into the settling of the unforgiving West Texas country, but except for Kilmer and Zahn, who plays Gus with a verve worthy of a young Robert Duvall, most of the actors in "Comanche Moon" act as if their characters are headed for the last roundup. As Woodrow, Karl Urban of the "Lord of the Rings" movies struggles to achieve a taciturnity that seemed natural to Tommy Lee Jones. The women's roles are all underwritten, and the actresses, even the glowing Elizabeth Banks, make little impression. (Presumably, Scull's lascivious wife, played broadly by Rachel Griffiths, is there for comic relief.) There isn't a heroine -- not a Diane Lane or an Angelica Huston -- in the lot.

Perhaps I'm quibbling. The truth is that as long as McMurtry writes these books, I'll read them, and as long as they make miniseries from them, I'll watch them. It's just hard to escape the feeling that McMurtry has created -- well, let's go ahead and say it -- a franchise that needs to be nourished. "Comanche Moon" is literate and watchable, and, at least compared to most westerns, it has the look and feel of authenticity. What it never quite seems to be, though, is compelling. Woodrow and Gus never needed a prequel.