Sound and fury on the campaign trail

The debate over the Clinton campaign's remarks on race has favored symbol over substance, and that's bad for black America. 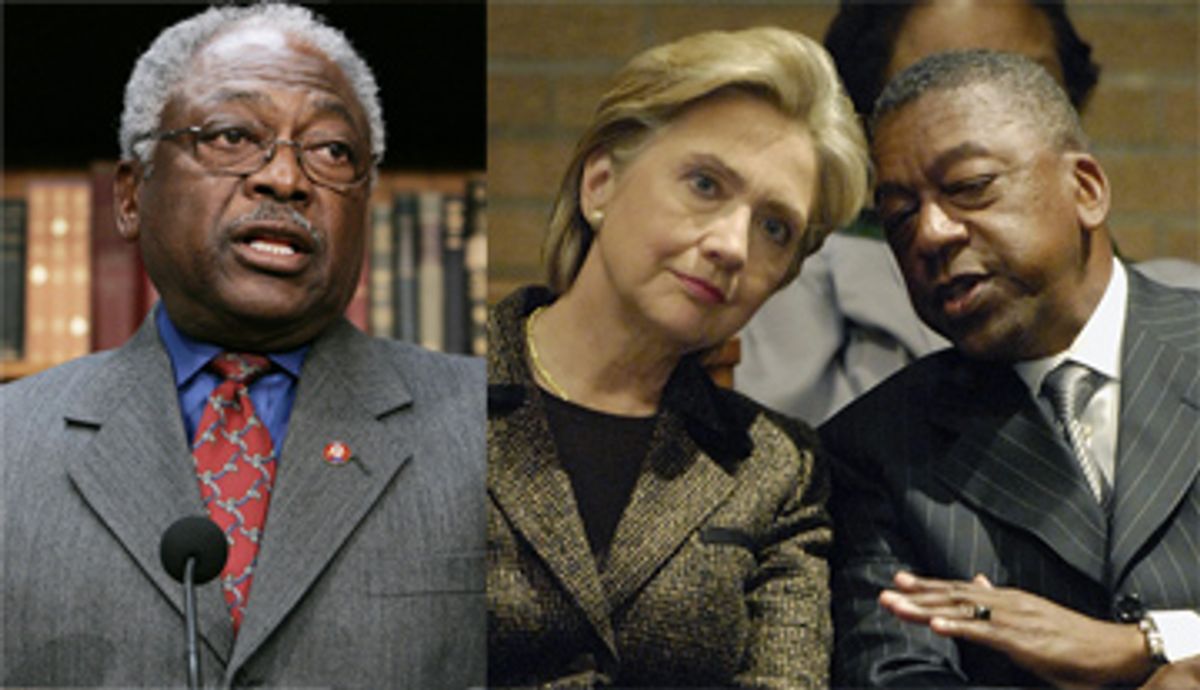 "We have to be very, very careful about how we speak about that era in American politics ... It is one thing to run a campaign and be respectful of everyone's motives and actions, and it is something else to denigrate those. That bothered me a great deal."
-- Rep. James Clyburn of South Carolina, as quoted in the New York Times on Friday.

Clyburn's comments to the Times, along with his hint that he might drop his neutral status and make an endorsement before the South Carolina presidential primary because of Bill and Hillary Clinton's remarks denigrating Barack Obama's campaign, kicked the presidential primary race into a new phase that seems to be all about race.

It started last Monday in New Hampshire, when Clinton made an attempt to distinguish between her practical experience and Obama's lyrically potent message of "hope," and noted that while Martin Luther King Jr. nobly fought for change, "it took a president to get it done." Then came the "fairy tale" remark by former President Clinton, who now says he only used it to refer to Obama's claim that he's never wavered in his opposition to the Iraq war.

Clyburn seemed to view such statements as insensitive at best and mildly racist at worst, and enough for him to think about changing his mind and putting his weight behind one of the other candidates. He has since withdrawn his threat, but the controversy won't go away. On "Meet the Press" Sunday, Clinton tried to blame the Obama campaign for fanning the flames about her remarks, which Obama denied as "ludicrous." But a memo leaked to the Huffington Post showed the Obama camp had compiled a list of examples of Clinton's alleged racial insensitivity that it was sharing with activists. Finally on Sunday BET founder Bob Johnson got Clinton into hotter water by seeming to refer to Obama's self-confessed youthful drug experimentation in a speech on Clinton's behalf in South Carolina.

What's striking in all of the controversy is that it centers on racial symbols, rather than substance. I believe Clyburn missed a prime opportunity to move the country's focus beyond symbolic slights toward real democratic change -- and this says a great deal about the practice of black politics at the elite level. And the fact that the mainstream media is paying such close attention to the debate over words and symbols says even more about what America thinks of black politics -- that it is more about reducing racial offense and fights over "black leaders" than it is about reducing the real impact of racism on the lives of black citizens, using government to do so.

Here are a couple of facts about South Carolina and about Rep. Clyburn's district that I wish had become part of the debate. This is the first election in modern memory where the Democratic candidates really have to compete for African-American voters. And by "compete" I do not mean go to a black church, use a fake black accent, talk about black folks' spirituality, blame black folks for black folks' problems -- and then expect their votes. The winner of the South Carolina primary will be the person that gets the most African-American votes period. And because each of the three Democratic candidates remaining needs those votes, they have to go after them vigorously. This places African-Americans and their elected representatives in a prime position.

With that in mind, take a look at James Clyburn's congressional district. It is predominantly black, having been carved by black Democrats and white Republicans in order to ensure a majority black district, and encompasses five counties as well as parts of 10 others. It has a large number of poor residents. The poverty rate in Williamsburg County, for example, is almost double the state's poverty rate, at 27.90 percent (with a child poverty rate of approximately 36 percent). It is far below the United States average in the percentage of its citizens educated beyond high school. Its median household income is more than $17,000 lower than the U.S. median income.

So imagine you are Rep. Clyburn in this situation. For the first time in a long time, the vote of your constituents, long ignored by the political party that you call home, matter. In that context your endorsement matters. If you're Clyburn, and you've got a chance to be "the decider," and you've got a large number of poor constituents (the majority of whom are black) who need help, do you focus on language and symbolic slights that have their roots in an era almost 50 years past? Or do you focus on the material needs of your citizens, on programs and policies to help them?

Unfortunately Clyburn and other black leaders seem to mainly be stuck on symbols. I don't defend the Clintons' remarks or criticize Clyburn's focus on language, but he could have done both, and pointed out that all the major candidates, except John Edwards, have given slight attention to poverty and civil rights.

Now it is possible that he dealt with programmatic concerns behind closed doors, in a reported conversation with Clinton. But that doesn't make a great deal of sense. Why would he talk about policy issues -- the things that we should be debating in public -- in private? It's a missed opportunity. He could have forced Clinton to deal with an issue that she has largely ignored -- poverty. Such a move would also put Obama on guard, as he has explicitly dealt with poverty more than Clinton, but not as much as Edwards. And it also might have put more states in play by increasing Edwards' chances.

Instead, we're now debating how candidates talk about our racial history and our racial divide, rather than what they do about it. Let me be clear: I'm not defending the questionable remarks of Clinton or her surrogates. And of the three candidates, Clinton is the least attractive to me (at this point Edwards is the best on paper). Further, Obama's use of the memo in one sense represents a refreshing change given the past unwillingness of black candidates (Harold Ford Jr. comes to mind) to stand up against racist campaign tactics.

But here's the problem from a black Democratic perspective. A slight against Obama under these conditions represents a slight against black people. When Clinton pollster Mark Penn refers to Obama's drug use over and over, even when he is apologizing I am offended by it. And this does decrease my already low level of support for Sen. Clinton. However, when Obama and his surrogates choose to respond to the symbolic offense without bringing up policies, it increases support for him among black voters solely because he was the victim of racism. And this makes it harder for black voters to critically evaluate him. We have to be able to acknowledge the possibility that he was the victim of racist campaign tactics -- but might not be the best candidate for blacks interested in issues of poverty and inequality.

Now to be fair, this issue is neither of Obama's nor Clyburn's making. The comments coming from the Clinton camp were the catalyst. However, both Clyburn and Obama had an opportunity to take these comments and use them to generate a new type of politics -- one in which substance and symbols are connected.

In order to make the most of our historic opportunity in this campaign, black voters have to look at all options. We should not lose sight of what politics is supposed to be about -- attaining the tools of government to address the needs of citizens. It would be a sin and a shame if we let this moment pass only to make the candidates sing "We Shall Overcome" for an endorsement, or alternatively, give our support to a candidate like Obama because of charges of racism, while ignoring the very things we're supposed to be overcoming in doing so.

Lester Spence is an assistant professor of political science at Johns Hopkins University. His specialties include racial politics, black politics, urban politics, public opinion and political behavior. His work has appeared in the National Political Science Review, the Dubois Review, the American Journal of Political Science, Political Research Quarterly, as well as in the Washington Post, NPR and Africana.com. He is at work on a book on hip-hop and black politics.