McCain owns the Iraq war -- for better or worse

On the stump in Michigan, John McCain campaigns on victory in Iraq. It's a risky strategy, as the recent surge in violence shows. 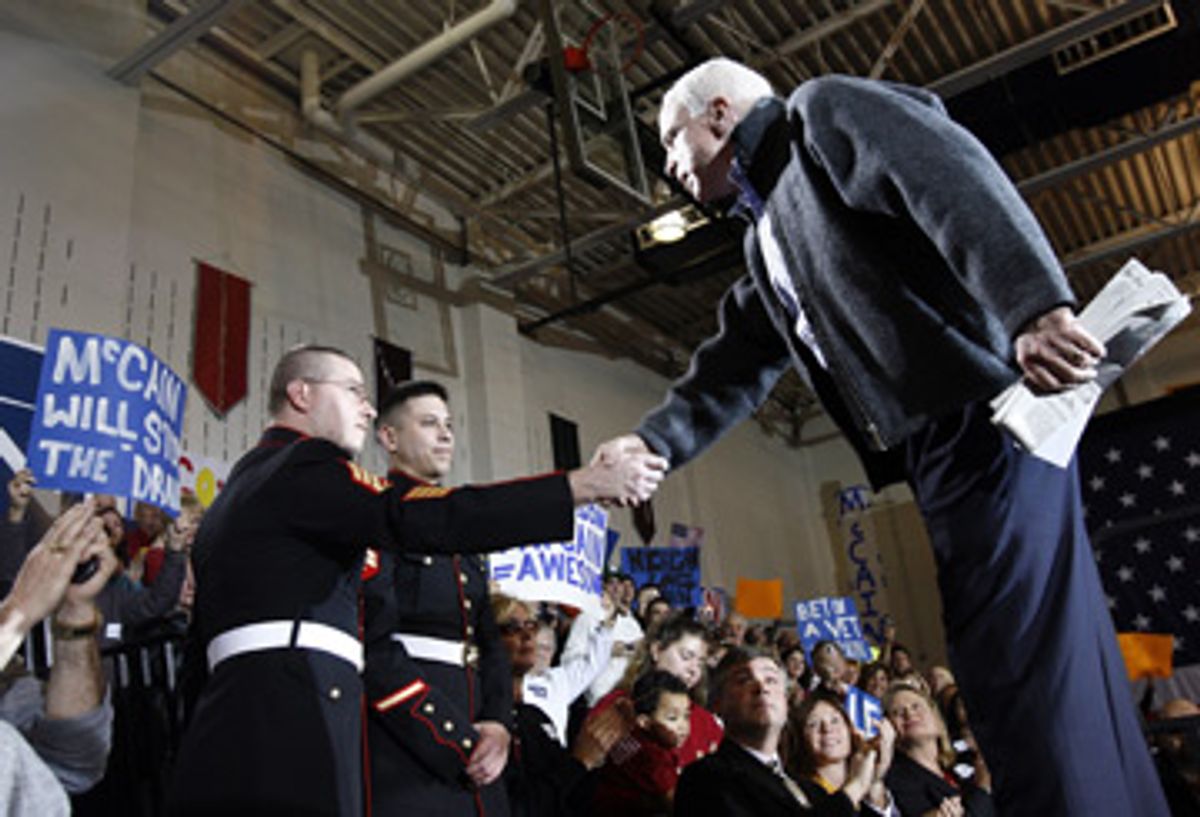 John McCain campaigned in Michigan this weekend on national security issues and Iraq, insisting that the United States is closing in on victory in Iraq and needs time to complete the mission. He spoke about Iraq in the small town of Clawson, telling voters in Tuesday's Republican primary, "We are winning this. Let's pursue it to the end together and stop this bitter partisanship."

Republican voters seem to trust the former prisoner of war on matters military. Ironically, the foremost proponent of the surge in the 2008 field, the man who proclaimed a willingness to stay in Iraq for a century if necessary, has even emerged as the favorite of those Republicans who express anxiety about the Iraq war and question the Bush administration's conduct of same. McCain won heavily among that constituency in New Hampshire last Tuesday, and a Detroit Free Press poll found that McCain led former Massachusetts Gov. Mitt Romney by more than 15 percentage points among the nearly one-quarter of Michigan Republicans for whom Iraq is the No. 1 issue. Looking past Tuesday's primary, however, McCain's strategy of declaring an ongoing victory is extremely risky. January has already seen a sharp uptick in violence, leaving dozens of Iraqi civilians and 20 U.S. soldiers dead since the beginning of the year, with the potential to bring into question the Arizona senator's credibility if the violence continues at that rate.

In December, Gen. David Petraeus, commander of ground forces in Iraq, had cautioned that "what has been achieved here remains tenuous and is still fragile in a number of areas." His prudence was vindicated the week after New Year's Day when Iraqi insurgents killed nine U.S. troops in two days. The deaths came in the course of a U.S. push against radical Muslim guerrillas in Salahuddin and Diyala provinces. In the latter, U.S. troops entered a booby-trapped house while pursuing guerrillas, and when the bombs detonated they killed six soldiers and wounded four. On Saturday, a bomb killed one U.S. soldier and wounded four while they were operating in the northern province of Nineveh. In all of December, 23 U.S. soldiers had died in action, whereas by mid-January the toll was already 19.

At a news conference in connection with President George W. Bush's Jan. 11 trip to Kuwait, Gen. Petraeus expressed concern that whereas the specialized roadside bombs called "explosively formed projectiles" (EFPs) had been deployed with much less frequency late in 2007, the Iraqi insurgency had begun using them again in 2008. He remarked, "In this year, EFP use has gone up actually, over about the last 10 days, by a factor of two or three." Explosively formed projectiles can penetrate even armored vehicles and tanks, and are a major source of fatalities among U.S. troops.

On the same day that the six troops died in the booby-trapped house, members of the major Sunni Arab bloc in the Iraqi parliament said they were extremely worried about the revival of violence in Baghdad, the killings of a number of members of the pro-American Awakening Councils, and the failure of the Shiite government of Prime Minister Nouri al-Maliki to back the Sunni neighborhood patrols. Their concern was provoked by the numerous attacks launched by Sunni radicals on the Awakening Councils in the first week of January.

On Jan. 7, a suicide bomber with a belt bomb, helped by an accomplice driving a car bomb, attacked the offices of the local pro-American Awakening Council in the eastern Baghdad district of Adhamiya, killing 14 persons and wounding 25. One of the dead was Col. Riyadh al-Samarrai, an Awakening Council leader in the neighborhood. The same day, in the Shaab district near Adhamiya, guerrillas in five cars kidnapped 10 volunteers from an Awakening Council group manning a traffic checkpoint. On the previous day, a suicide bomber waded into a crowd of soldiers at the annual Army Day celebration in the capital. He detonated his fatal payload, killing 11 persons and wounding 17, coloring the street red with blood and scattering body parts.

January has also witnessed a wave of bombings of Christian churches. On the sixth, a Sunday, insurgents targeted three churches and a monastery in the major northern city of Mosul. In an attack clearly coordinated with the Mosul explosion, insurgents launched a mortar attack on a Roman Orthodox Church in east Baghdad and on a monastery to the south in Zaafaraniya. Six persons were wounded in these attacks. Just three days later, guerrillas bombed two churches in the northern oil city of Kirkuk. The coordinated bombings of churches provoked Pope Benedict XVI to express "deep concern" about the condition of Iraqi Christians. Some observers estimate that only half of Iraq's 800,000 Christians are still in the country, and that most of the other half have sought refuge in Syria and Lebanon.

There is more than anecdotal evidence for the surge in violence in 2008. Statistics bear it out. There have been an average of 14 deaths per day from car bombs in Iraq in January, according to Iraq Body Count, besting the 2007 average of 8.5. And according to press reports, snipers have been killing an average of 38 Iraqis a day in the first half of January, less than the 56 per day in 2007 but substantially more than the 26 per day in 2006. Two weeks is too short a period from which to generalize, but it seems clear that the new year has not started out on a good foot, and it is already clear that December's much reduced casualty figures were a lull, not a trend.

So why is the Republican who is most identified with the Bush administration's military policy in Iraq, its surge, also the one most trusted by those primary voters who question the Bush record on Iraq? One possible explanation for McCain's success among this group of Republicans is that he offers a way out of the quagmire that has been killing nearly two U.S. troops a day this month. He talks about winning, about a successful counterinsurgency campaign that eliminates those deaths and allows the U.S. to base troops in Iraq for the long term without continued loss of life. To an outsider it might sound like Richard Nixon's secret plan to end the Vietnam War in 1968, a war that lasted another five years. To a Republican primary voter, it might sound like a way to declare victory.

In a notorious Jan. 3 campaign event in New Hampshire, a questioner jokingly referred to by McCain as "Ernest Hemingway" because of his resemblance to the author pushed the candidate on his support for long-term bases in Iraq. The questioner said, "I do not believe that one U.S. soldier being killed almost every day is success," and asked how long McCain would keep troops in Iraq. The senator replied that the U.S. still had troops in South Korea and Bosnia. "Hemingway" replied, "There's no fighting going on in South Korea."

McCain responded that U.S. casualties are continuing, but insisted "they are much less and we will eventually eliminate them." Then came the exchange that may dog McCain for the rest of his campaign:

E.H.: President Bush has talked about our staying in Iraq for 50 years --

When his questioner asked, "What if American soldiers are being killed one per day four years from now?" McCain conceded his point.

The senator admitted, "I understand that American public opinion will not sustain a conflict where Americans continued to be sacrificed without showing them that we can succeed."

Even Bush was embarrassed by McCain's pugnacity, which did not play well with the Arab public as the president continued his Middle East tour. Asked on NBC about the senator's remark, Bush replied, with uncharacteristic wryness, "I don't know if a hundred years is the right number. That's a long time."

But despite his hyperbole, McCain is clearly well aware that the patience of the American public with the Iraq war has run out, and that the only realistic hope for keeping U.S. troops in that country lies in winning the counterinsurgency struggle fairly quickly so that the U.S. presence does not provoke dozens of funerals for slain soldiers back on the home front every month. He also hopes that the threat of al-Qaida's operations in Iraq will be sufficient to stiffen American resolve to keep bases in Iraq.

If McCain is to win the presidency while supporting a continued big troop presence in Iraq, he has to hope that U.S. casualties fall rapidly, but January has not been kind to those hopes. The surge in violence is a reminder that the Iraq situation is unpredictable, whereas McCain is betting on it becoming increasingly stable.

Nor is it clear that McCain's calculation is correct, that the American public is willing to put up with bases in Iraq as long as they do not come at the price of a steady stream of coffins arriving at Dover Air Force Base. The opinion polls do not support a continued presence, period -- with or without U.S. fatalities.

Americans would presumably be more willing to keep troops in a friendly country to protect it from a common enemy. But a December Harris poll found that nearly half of Americans believe Iraq is an enemy! And while a November Pew Charitable Trust poll found that nearly half of Americans agreed that the security situation in Iraq had improved, that finding had no impact on their determination that the U.S. should withdraw from Iraq as soon as possible. Some 75 percent of Democrats wanted troops home with all due speed, while 55 percent of independents felt that way. Even among Republicans, 30 percent want the troops out ASAP.

McCain's decision to campaign on the basis of a century-long U.S. military presence in Iraq may serve him well in some Republican primaries, where his commitment to counterinsurgency and a quick victory is read as an acceptable exit strategy. But in the general election, he will face widespread skepticism about the desirability of permanent bases in Iraq. A majority of the American public believes that Iraq is another Vietnam, a fruitless black hole for the expenditure of their blood and treasure. And while McCain is quick to mention places that have had a long-term U.S. military presence, there is one country conspicuously absent from his list. He spent five years there as a prisoner of war. It is Vietnam.