Is Mitt Romney taking Michigan for a ride?

The presidential hopeful crusades for the auto industry of yore -- and looks awfully out of touch with Michigan's economic pain. 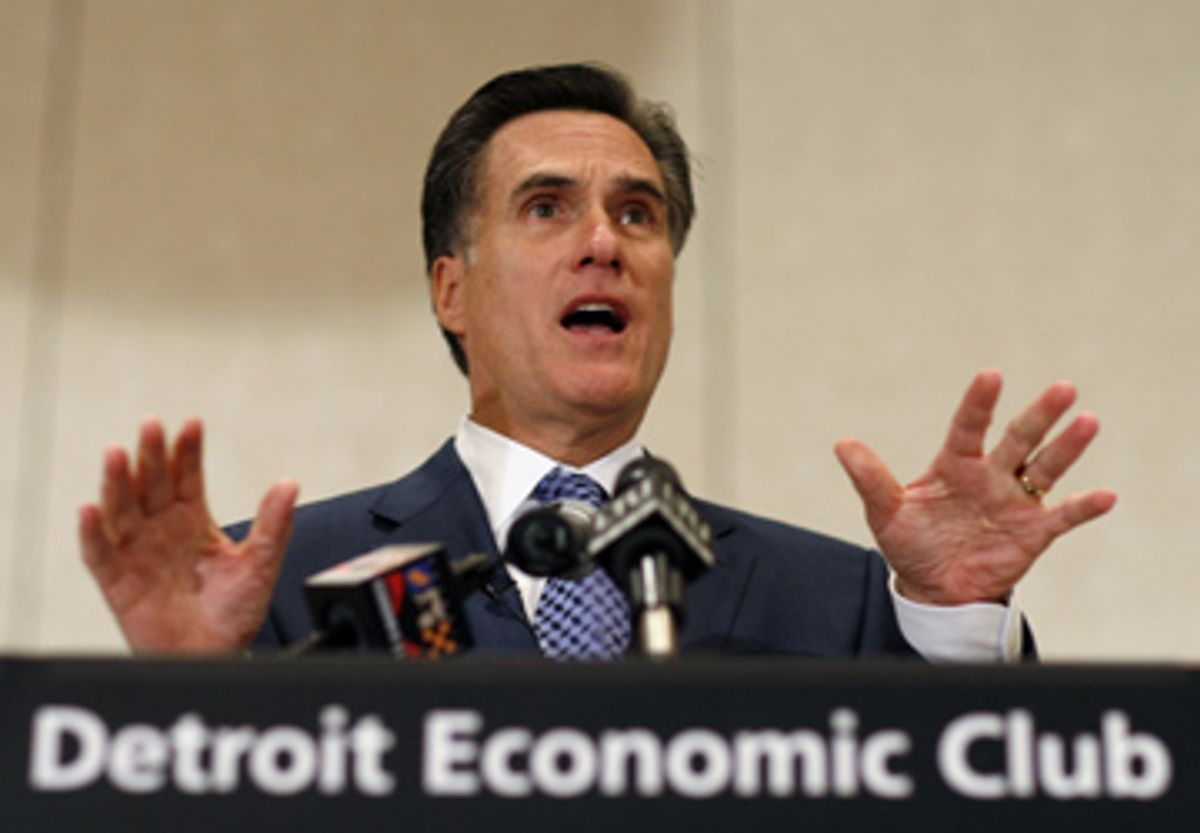 Remember the Nash Rambler, the convertible that took so many families on cross-country vacations in the 1950s and '60s? Mitt Romney remembers. In fact, he owns one. The car was produced by the American Motor Co. back when Romney's father, George, was its president.

Last year, when Romney turned 60, his own sons chipped in to buy him a '62 Rambler. "That was the kind of car I drove in high school," he reminisced before a crowd of suburban voters on Sunday. "You marvel at how much cars have changed. Great big steering wheel. There are no seat belts."

Romney should have made the Rambler his official campaign vehicle, because he's been pitching himself to Michiganders as the man who'll bring back the state's glory days, when every car bore an American nameplate, and an auto executive could say, "What's good for General Motors is good for the country, and vice versa." Back then, Washington didn't hassle the automakers with burdensome mandates for stuff like seat belts. Or higher gas mileage.

All week, Romney and John McCain have been feuding over whether the auto industry represents Michigan's past, or its future. On Saturday, at a town hall meeting in blue-collar Warren, McCain gave his supporters some of his straight talk, telling them, "The jobs that are leaving the state of Michigan have left and are not coming back. We're going to try to create new jobs."

To replace the old lifestyle of building internal combustion engines, McCain proposed research in hybrid motors, battery-powered cars and hydrogen fuel cells. He also wants to open job retraining centers in the state's community colleges. "Our future is ahead of us in Michigan," he said. "Let's not look back. Let's look forward. We'll restore Michigan back to its preeminent place in America and the world."

To Romney, McCain's approach isn't futurism, it's pessimism. In Southfield, he had a one-word retort: "Baloney."

"I hear people say, 'It's gone, those jobs are gone, transportation's gone, it's not coming back,'" he said. "I'm going to fight for every single job. I'm going to rebuild the industry. I'm going to take burdens off the back of the auto industry."

At a speech to the Detroit Economic Club on Monday, Romney told an admiring audience that "Washington has to stop loading Detroit down with unfunded mandates. Of course fleet mileage needs to rise, but discontinuous CAFE [Corporate Average Fuel Economy] leaps, uncoordinated with the domestic manufacturers, and absent consideration of competitiveness, kills jobs and imperils an industry." Romney also proposed spending $20 billion a year on "energy research, fuel technology, materials science, and automotive technology."

But government regulation isn't killing Michigan's auto industry, nor is government neglect. Labor costs are. General Motors, especially, is getting crushed by the health benefits it pays its workers. The company and its 150,000 employees are paying the medical bills for 350,000 retirees, a cost to the company of more than $5 billion a year. If Romney wants to bring auto plants back to Michigan, he'll have to fund research into a shop rat who works for $2 an hour, never gets sick, and dies on retirement day.

"Probably starting in the mid-1990s to the late 1990s, the manufacturers of durable goods started to see that labor costs were simply not sustainable in an advanced industrial society such as Michigan," says Craig Ruff, senior policy fellow at Public Sector Consultants, a Lansing think tank. "All the entrenched American manufacturers found foreign competition intolerable. They simply could not undercut the price. By 2000, every economist in Michigan, every leader reached the conclusion that most of the jobs on the factory floor were never coming back. If the point of difference between McCain and Romney is whether the jobs are coming back, McCain is far more accurate."

Romney acknowledges the burden of legacy costs posed by company retirees, but in a Republican primary he's not willing to touch the solution the auto companies want: a national healthcare plan. Instead, he mocks "Hillarycare" and the notion of European-style social services.

Romney's supporters appreciated his message of free enterprise, but they also blame NAFTA for Michigan's job losses, and would like to see "fairer" agreements with foreign countries. Romney is an ardent free trader who believes that increasing the president's power to negotiate trade agreements can open new markets for American products -- especially cars.

Gordon Schepke, a retired autoworker in nearby Troy, also condemned high-mileage cars, saying, "I was rear-ended in a car crash, and I would have been dead if I hadn't had a minivan." He fretted that it's fashionable in Washington to bash the auto industry for heating up the planet and enslaving America to Middle Eastern oil. "We can save jobs with fair trade agreements," Schepke said. "Our trade agreements help overseas companies, but they don't help us at all. I want it to be a more even playing field." He put it in even starker terms. "If we lose our manufacturing jobs we're going to lose our sovereignty. If we have another war, the Japanese aren't going to build our tanks."

The Romney name is a silvery memory in Michigan. When George Romney was governor, from 1963 to 1969, the state's income exceeded the national average by 25 percent. The numbers are far different now. Since 1999, Michigan has lost 250,000 manufacturing jobs. Housing starts have dropped nearly 50 percent in the last two years, and Michigan's 7.4 percent unemployment rate is so close to that of a certain chronically poor Southern state that locals have coined the term "Michissippi."

To take it beyond statistics: On my way across the Lower Peninsula, I stopped in Lansing, where I passed a shopping center that was once anchored by a Kroger supermarket and an Ace Hardware. Now there was a laundromat, a dollar store and a plasma donation center, with some of the storefronts empty and dusty. A corroded '85 Ford pickup sat in the parking lot, for sale for $500.

Romney was also in Lansing last week, but he visited the state Capitol, where he posed beside his father's official portrait. At his Southfield rally, he warmed up the crowd with Michigan anecdotes, as though he were a long-absent native son at a high school reunion.

"What a thrill it is to come back to Michigan, where almost all the cars you see are American-made, the way it ought to be," he said, to whooping cheers. "The people have no accent, and they knows that pop refers to a drink, not a relative. And that Vernors is the best-tasting ginger ale in the world."

Southfield is Romney country. One member of the Sunday crowd -- which, like Mitt himself, was impeccable in its grooming, dentistry, fitness and post-church fashion sense -- waved a placard from George Romney's 1968 presidential campaign. Mitt Romney grew up a few miles away, in Bloomfield Hills. But even for the prosperous '60s, his upbringing was far from the typical Michigander's. As the son of an auto executive, and later governor, he was one of the state's princes. Only a Ford could have been more privileged. When Romney rode with his father to the North American Auto Show, they were led by a police escort. He went to high school at Cranbrook, the private academy that also produced Michael Kinsley, Thomas McGuane, Daniel Ellsberg and other Detroiters who went on to make it big outside the state. As soon as he turned 18, Romney left for Brigham Young, Harvard and Bain Capital, the private equity firm where he amassed a multimillion-dollar fortune.

Mike Huckabee has also been campaigning in Michigan, but without much of an economic plan. Instead, he's offering that old Arkansas poor-boy line: I feel your pain. In an ad aimed at undercutting Romney's identification with Michiganders, he snarked that "most Americans want their next president to remind them of the guy they worked with, not the guy who laid them off."

The strategy just might work. Little over a year ago, Michigan rejected another local prince: Dick DeVos, heir to the Amway fortune. DeVos, the Republican nominee for governor, came off as the boss who tells you the company is too strapped to pay Christmas bonuses, then flees the executive parking lot in his Town Car.

Mitt Romney's deepest loyalty is not to his native state, but rather to the auto industry, which brought his father to Michigan and made the family's name and fortune. But nowadays the two aren't one and the same. In George Romney's era, what was good for American Motors was good for Michigan (and vice versa). Today, however, many Michiganders have soured on the Big Three's leadership. They blame it for exporting jobs and failing to keep up with industry innovations, such as fuel cell technology. A modern auto exec would have a hard time mounting a run for governor.

"It wouldn't exactly be a résumé builder in terms of politics," Ruff said. "I don't think people want to see someone who's overseen the decline of the state's auto industry. It'd be a tough sell."

George Romney was a great progressive, both as an auto executive and a politician. As head of American Motors, he turned the Rambler into the first compact car, to compete with small foreign imports. The rest of the auto industry didn't follow his lead until the energy crisis of the 1970s. As governor, he imposed the state's first income tax, marched for civil rights and led the adoption of a state constitution that explicitly bans the death penalty. Romney was haunted by the Detroit riots that marred his governorship, so later, as secretary of Housing and Urban Development, he drew up a plan to integrate the suburbs with public housing. It was quashed by President Nixon.

Mitt Romney likes to say currently that Michigan is in a "one state recession." That may be essentially true, but it's because Michigan relies so heavily on manufacturing. Yet, people here sense that Michigan needs a plan for its future, not a veneration of its past. Maybe Romney can best carry on his father's legacy -- and perhaps do well at the polls -- by looking to accelerate Michigan out of its internal combustion era instead of trying to put it in reverse.