No bears for oil

Why hasn't the polar bear been granted federal protection? Maybe because the Bush administration plans a last-minute handout of oil leases on its habitat. 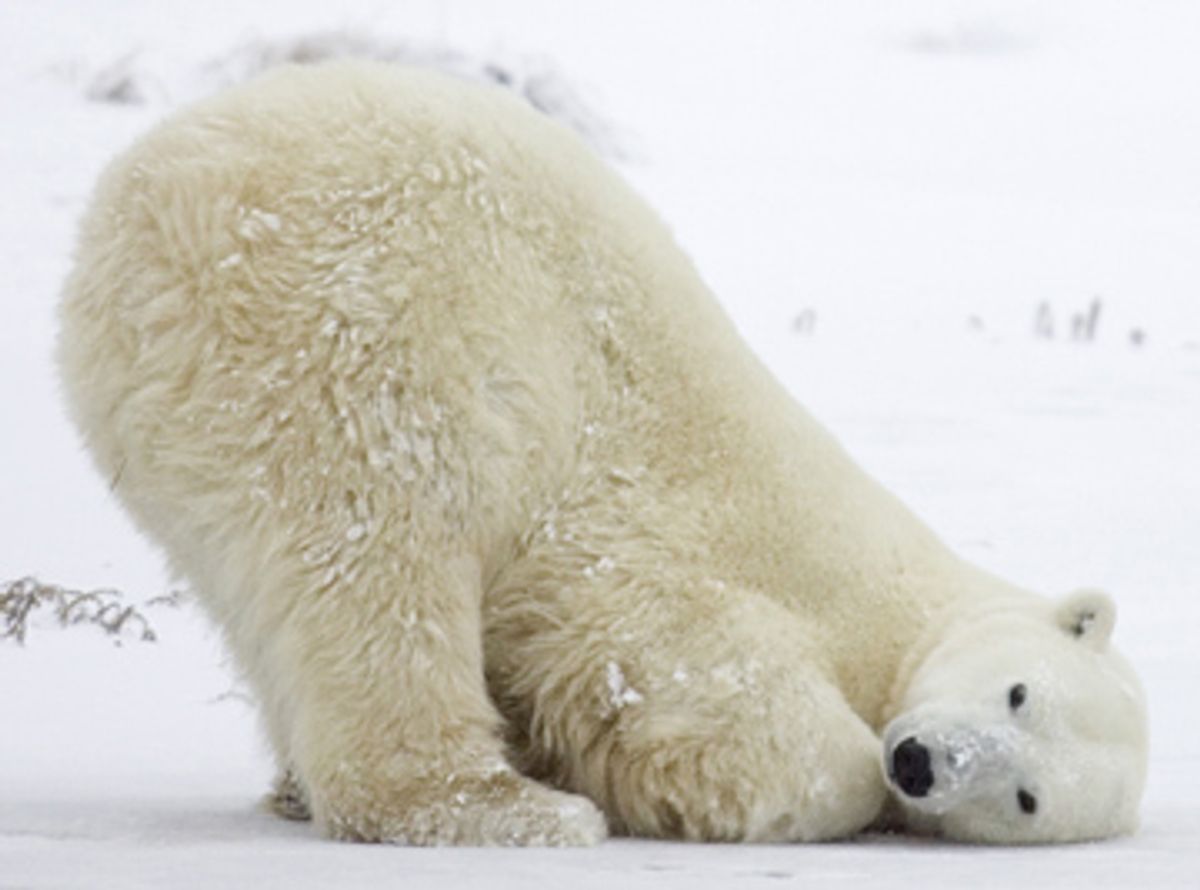 By 2050, two-thirds of the world's polar bears will have vanished, as a result of global warming melting their icy habitat, according to scientists at the U.S. Geological Survey. There may no longer be any polar bears at all living in Alaska, their only home in the United States. Still, this stark prediction, revealed in September 2007, after a yearlong review of the impact of melting sea ice on the Alaskan bears, hasn't inspired the Bush administration to list the bear as even a threatened species, much less an endangered one, under the Endangered Species Act.

The U.S. Fish and Wildlife Service, responsible for listing mammals as threatened or endangered, has been one of the most politically compromised scientific divisions in the Bush administration. It didn't consider extending federal protections to polar bears until it was petitioned, and subsequently sued, to do so by a coalition of environmental groups back in 2005. Now it admits that polar bears are "likely to become endangered in the foreseeable future," and explained recent delays by citing the complexity of the decision: It has never before had to designate a species as threatened because of global warming.

But critics say that Fish and Wildlife hasn't made a ruling yet because another agency within the Department of Interior, the Minerals Management Service, is on the verge of handing out oil and gas leases in vast swaths of the polar bears' remaining habitat. The Endangered Species Act prevents the federal government from taking actions that harm protected species. "At the same time the administration is illegally delaying a decision on the polar bear listing, it is also racing to sell some of the polar bear's most important habitat in the Chukchi Sea for oil and gas development," said Andrew Wetzler, director of the Endangered Species Project at the Natural Resources Defense Council.

On Thursday, the House Select Committee on Energy Independence and Global Warming will hold a hearing on the polar bear listing and controversial oil leases. Rep. Edward J. Markey, D-Mass., who chairs the committee, said in a statement: "The Bush administration is once again putting the oil cart before the polar bear. On the one hand, the Interior Department is dragging its feet on protecting the polar bear, while opening up new oil and gas drilling in sensitive polar bear habitats on the other."

Details of the oil development were announced earlier this month. The Minerals Management Service plans to lease 30 million acres for oil and gas drilling in the Chukchi Sea, where about one-fifth of the world's remaining polar bears live. The lease sale will take place on Feb. 6, which could allow it to go through before any plans to protect the polar bears get in the way. "Short of sending Dick Cheney to Alaska to personally club baby polar bears to death, there's not too much that the administration can do that is worse for polar bears than oil and gas development in their habitat," says Kassie Siegel, director of the climate, air and energy program for the Center for Biological Diversity.

The summer of 2007 saw record melting of sea ice in the Arctic, according to the National Snow and Ice Data Center, shrinking more than 1 million acres. That's more melting than the average summer melt in the last quarter century. NASA climate scientists now predict that the Arctic could be ice-free by as soon as the summer of 2013, based on projections using satellite imagery. That's bad news for polar bears, which eat primarily ringed seals and bearded seals that the bears hunt from the ice. "The Arctic is melting, polar bears are drowning and starving, and so it's outrageous they are rushing to lease polar bear habitat for fossil-fuel development," says Siegel.

By the Minerals Management Service's own estimate, if the drilling takes place, there's a 40 percent chance of a large oil spill within the area over the life of the project. When polar bears come into contact with spilled oil, it sticks to their fur, which the bears attempt to clean off by licking themselves, ingesting the oil. That can make them sick or even kill them. It's also unusually difficult to clean up an oil spill that occurs amid the fragmented sea ice where the bears live. But even without a spill, the ships, airplanes and industrial equipment associated with fossil-fuel extraction would represent another source of stress to the already faltering bear population. And that's not even considering the impacts that the greenhouse gas from the extracted natural gas and oil would have on the bears' melting habitat when they reached the market, and were consumed, spewing more carbon dioxide.

Every listing that has taken place since Bush took office -- totaling a paltry 58 -- has occurred at the behest of a court order or a petition from groups of citizens. "The Bush administration literally has the worst record on endangered species in history, since the act was passed," says Jeff Miller, conservation advocate with the Center for Biological Diversity, a group that has filed some of those petitions and lawsuits on behalf of imperiled species. Even Bush's father, the first President Bush, managed to list 231 species in four years, while the current administration has made its 58 listings under duress. That's hardly because the nation's critters are faring better now than they were back in the '90s. They continue to face the growing pressure of global warming, habitat loss and competition from invasive species.

The Bush administration will go down in history for, among other things, its political interference in science, on issues from global warming to evolutionary biology to stem cell research. Yet the meddling at Fish and Wildlife has been some of the most blatant. In May 2007, Julie MacDonald, deputy assistant secretary of the Department of the Interior, resigned in disgrace after an internal investigation found that she'd given government documents to industry lobbyists. When the scandal broke, MacDonald, who was a political appointee and a civil engineer, not a biologist, became infamous for rejecting staff scientists' recommendations that species needed protection, despite her lack of scientific credentials. She even appended sarcastic commentary to scientific documentation. As the Washington Post reported, when scientists suggested that a proposed road might destroy the greater sage grouse's habitat, MacDonald wrote: "Has nothing to do with sage grouse. This belongs in a treatise on 'Why roads are bad.'"

After MacDonald's ouster, Fish and Wildlife reversed seven decisions in which she'd had a hand, improving protections for species ranging from the white-tailed prairie dog to the Canada lynx. Yet environmentalists contend that the fate of more than 30 other species should be reviewed, given the evidence that MacDonald interfered with the scientific analysis of their conditions. Still, it's not as if merely removing MacDonald ushered in a new era of species protection at Fish and Wildlife. She was replaced by Todd Willens, a former staffer for notorious environment bête noire Richard Pombo. Willens aided the former California congressman in his attempts to undermine the Endangered Species Act by promoting private property rights above all.

As for the polar bear, environmental groups are especially keen for the Arctic ursine to achieve federal protection because it would put the feds in a tough spot. Should the polar bear earn an official designation under the Endangered Species Act, the government could be challenged for actions that increase greenhouse gas emissions, such as issuing permits for new coal-fired power plants. "If there are major federal actions that increase greenhouse gases, they would have to consider that they are negatively impacting species," explains Kert Davies, research director for Greenpeace USA.

With the clock winding down on the Bush administration, and the prospect of real regulation of greenhouses gases nearing on the horizon, the Bush-Cheney oilmen want to get in their last hurrah. "This administration is racing to hand out as many entitlements for fossil-fuel development as they can," says Siegel. "They know that regulation of greenhouse gases is coming. They know it's inevitable."

And whoever the next president is, one thing's for sure: He or she couldn't possibly do less for endangered species than this one has. Miller says: "There is literally no way that anyone could be worse."