Conservatives say backfield in motion among men is spreading a lethal bacteria. Time for instant replay. 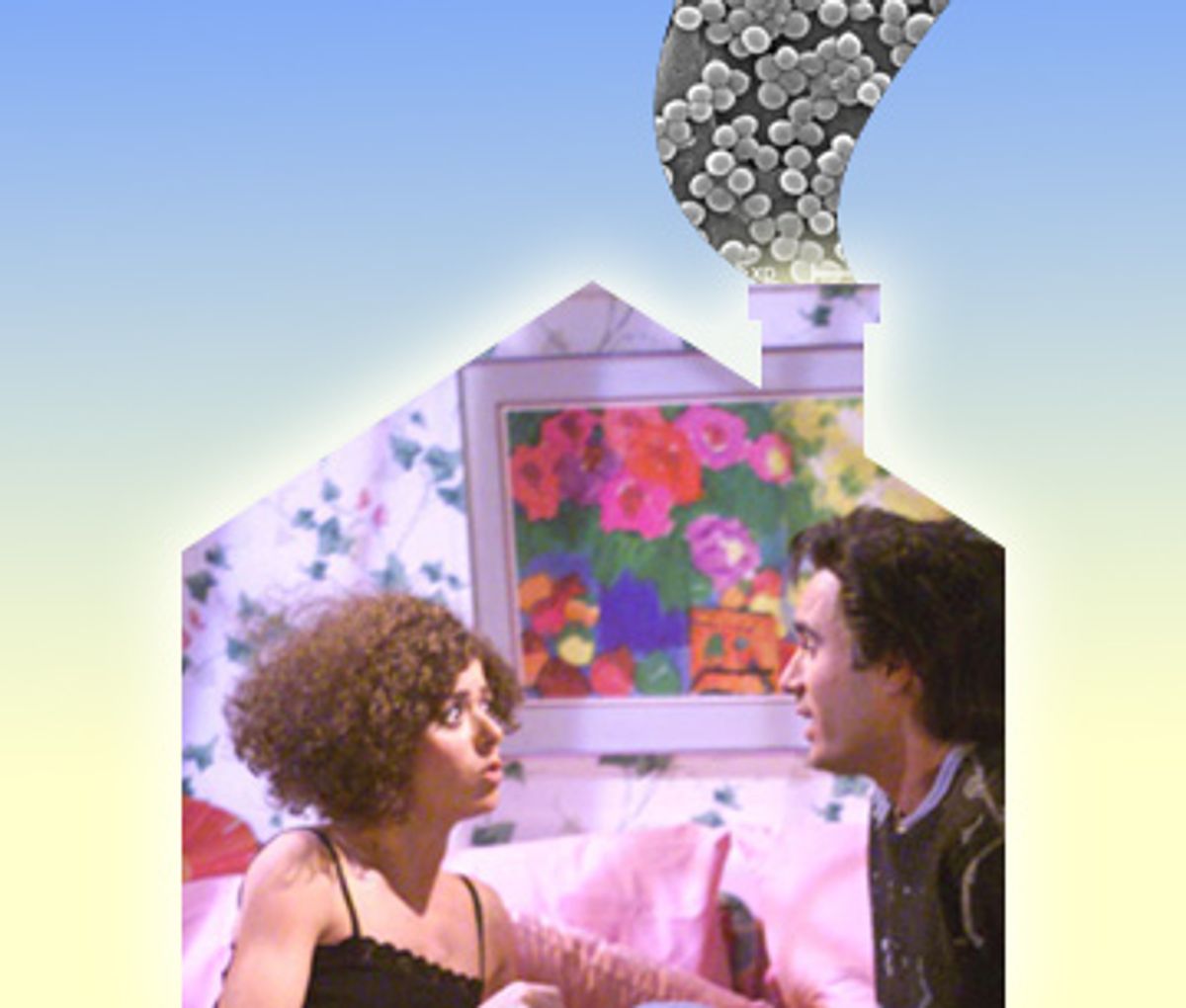 With increasing alarm, I have been reading about the bacteria being spread by men who repeatedly engage in passionate acts, including those that cause abrasions, such as rug burns.

According to a study published in the New England Journal of Medicine, the bacteria, methicillin-resistant Staphylococcus aureus, or MRSA, affects men who had "frequent contact" and "often did not shower before using communal whirlpools." These men also consumed "10 times the number of antimicrobial prescriptions dispensed to the general public."

The venerable journal warned that continued use of virus-fighting drugs by these men, "combined with other factors such as compromised skin, close skin-to-skin contact, [and] contaminated environment," was brewing "the right conditions for efficient transmission" of the bacteria.

This, indeed, is cause for concern. MRSA has led to staph infections that have killed patients in hospitals nationwide. Further, this particular variant of MRSA, known as USA300 -- which can eat skin and tissue -- is notoriously difficult to treat; many drugs wither in its path.

For the past three days, the media has publicized another study of the dangerous bacteria. In the Archives of Internal Medicine, researchers did a demographic analysis of the nasty USA300 in San Francisco and Boston. In particular, they discovered a "high incidence" of the destructive strain in San Francisco's Castro District. In summary, they wrote, the "multidrug-resistant USA300 has emerged as an important source of disease among men who have sex with men in two geographically distinct communities."

For Matt Barber, the policy director for cultural issues for Concerned Women for America, "the nation's largest public policy women's organization with a rich 29-year history of helping our members across the country bring Biblical principles into all levels of public policy," this was a call to arms.

"Television shows like 'Will and Grace' glorify the homosexual lifestyle," Barber declared, "while our children are taught in schools that homosexuality is a perfectly healthy, alternative sexual 'orientation.' 'Stay out of our bedrooms!' we're often commanded by militant 'gay' activists. Well, now the dangerous and possibly deadly consequence of what occurs in those bedrooms is spilling over into the general population. It's not only frightening, it's infuriating. Citizens, especially parents, need to stand up and say, 'No More!'"

Binh An Diep, lead author of the San Francisco and Boston study, addressed the outcry on NPR: "Because USA300 and other Staph aureus [bacteria] are so easily spread -- just through skin-to-skin contact transmission -- we don't think it will be restricted to the men-who-have-sex-with-men population, but will be spread into the general population."

When it comes to spreading the bacteria, it is not homosexuals we have to worry about. It is that much wider swath of the male population examined in the New England Journal of Medicine. In the journal, the medical researchers were not studying gays, they were studying the St. Louis Rams. That is correct: football players; in particular, linebackers.

"In our investigation," the journal noted, "infection occurred only among linemen and linebackers, and not among those in backfield positions, probably because of the frequent contact among linemen during practice and games." Those rug burns I mentioned are in fact turf burns. "All MRSA skin abscesses developed at sites of turf burns," declared the journal.

The study revealed another problem: All football people are not that clean. "We also observed a lack of regular access to hand hygiene," wrote the authors, "for trainers who provided wound care; skipping of showers by players before the use of communal whirlpools; and sharing of towels -- all factors that might facilitate the transmission of infection in this setting."

Focused on just San Francisco and Boston, the staph study in the Archives of Internal Medicine pales next to the one in the New England Journal of Medicine. It is fair to reason that more American men play football than have sex with one another. Authors of the football study concluded that the perilous USA300 strain "was present in diverse regions of the United States."

In light of Sunday's certain-to-be-exciting conference championship games between the Patriots and Chargers, Giants and Packers, it pains me to say that for the health of our children, neighbors, friends and selves, we must borrow the words from Matt Barber and declare that when it comes to football in America, "Citizens, especially parents, need to stand up and say, 'No More.'"