Woody Allen hangs Colin Farrell and Ewan McGregor out to dry in this unintentionally funny film. 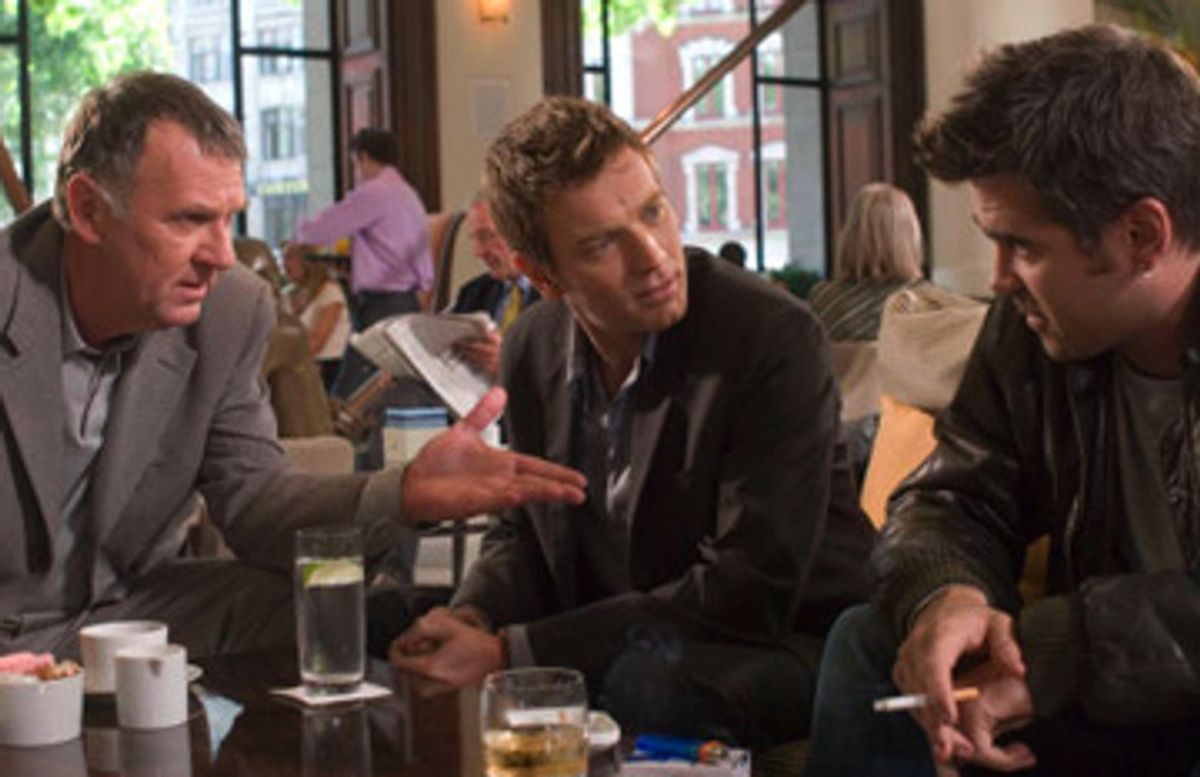 "Cassandra's Dream," an earnest meditation on greed, desire, murder and class struggle, is one of Woody Allen's funniest movies in years -- except Allen doesn't know it. Colin Farrell and Ewan McGregor play working-class brothers in London who are drawn into a murder scheme by their rich uncle, played by Tom Wilkinson. They've found themselves in a tight spot, moneywise; Uncle Scrooge McDuck is their only hope. When he agrees to fork over the dough, the brothers beam at him gratefully, promising they'll find a way to pay him back. "I was going to talk to you about that," Wilkinson replies, virtual devil horns sprouting from his scalp and literal thunder booming on the soundtrack, signaling big moral quandaries ahead.

It has gotten to the point where it's almost impossible to review Woody Allen's movies: They've become practically forces of nature, dreary, drizzly affairs that show up unbidden on the landscape. I know no one who looks forward to them; I know few people who even bother to see them. And still, Allen keeps churning them out, year after year. Occasionally, as with a picture like the mild and perfectly entertaining "Scoop," he hits a note that reminds us, if only in a small way, why he used to be great. But for the most part, Allen has decided in recent years that grand questions about the distinctions between right and wrong are the only ones worth pursuing. Pictures like the preachy "Match Point" and now "Cassandra's Dream" leave a medicinal, metallic aftertaste. I sometimes suspect Allen's true aim is to leave us either feeling punished and ground down or comfortably superior to the characters on-screen. Neither makes for great art, or even for piddling art.

I could tolerate Allen's fixation on what he sees as major themes if he didn't approach them with so much pompousness; in "Cassandra's Dream," which he wrote as well as directed, he shows no generosity toward his characters, and little toward his actors. McGregor plays Ian, a likable (at first) but social-climbing fellow who feels constrained working in his father's restaurant business. (The parents in this little saga are played by John Benfield and Clare Higgins, and even though Allen condescends to their characters, these actors manage to maintain a degree of dignity for themselves.) Ian's dreams are big, and they fatten up even further when he meets Angela (Hayley Atwell), a sophisticated and openly ambitious actress, the kind of woman who keeps several guys on the line as she waits to see which one has the most to offer her. Desperately in love, and seeing this gorgeous, confident, classy creature as the kind of woman he's always wanted, Ian pretends to be much richer than he is, ultimately making all kinds of promises he can't possibly keep.

Farrell plays Ian's brother, Terry, a sweet, openhearted guy who makes an honest living as a mechanic, when he's not drawn to the poker table or the dog races. We see some really bad stuff coming when, after winning a wad of dough, he gives his girlfriend, Kate (played by Sally Hawkins, one of the few performers here who manages to play a person and not a class), a truly expensive (and not very pretty) handbag. Kate is thrilled with the gift, even as she worries about how much it cost and where Terry got the money for it, and this moment between the two actors is one that truly clicks: Terry's devotion to Kate feels genuine, an act of generosity in an otherwise stingy little story.

But it's not long before Wilkinson, as the somewhat ominously named Uncle Howard, steps in, waving his figurative pitchfork. Wilkinson is a solid enough actor, but here he gives a Master Thespian performance that would do Jon Lovitz proud. When he intones, "Family is family, blood is blood!" he may as well be holding a Styrofoam skull aloft and crying out "Acting!"

Who gives his actors dialogue like this? As in so many of Allen's movies over the past 20 years, everything is designed to highlight what a classy enterprise we've been graced with. Philip Glass provides the score, a relentless clattering of nervous-housewife strings; Vilmos Zsigmond, one of the great cinematographers of our age (you earn that title when you shoot a picture like "McCabe and Mrs. Miller"), makes the whole affair look pretty enough, in a restrained sort of way.

But I can't forgive Allen for hanging his two lead actors out to dry. I've never seen McGregor give such a flat, awkward performance; he barely seems to believe the emotional shifts his character makes, let alone make us believe them. And while Farrell's tempered, tentative swagger is touching in his early scenes, his performance quickly disintegrates. I can't shake the feeling that Farrell is a deeply trusting actor: There's something unvarnished and eager about him, and he obviously feels the desire to work with "quality" directors like Allen and Terrence Malick, both of whom are big, respected names even though -- particularly in Malick's case -- they don't always show much of an affinity for actors. Farrell is capable of displaying great vulnerability, but nearly everything he does in this movie's later scenes is embarrassingly overplayed: His face looks perpetually pained, as if he were suffering the effects of a gas bubble.

Allen saddles his actors with lots of expository dialogue, and moves the action along by having characters utter lines like, "I'm worried about Terry." "Why?" "It's his mental health." And the movie's grand themes -- we know they're grand because the picture's very title contains that unmissable reference to Greek mythology -- are spelled out in letters bigger than the Hollywood sign. This isn't filmmaking; it's thesis defending. The lesson to be learned? It's immoral to take another person's life. Diagram, dissect, discuss.