Do we really need the horror of 9/11 to be repackaged and presented to us as an amusement-park ride? 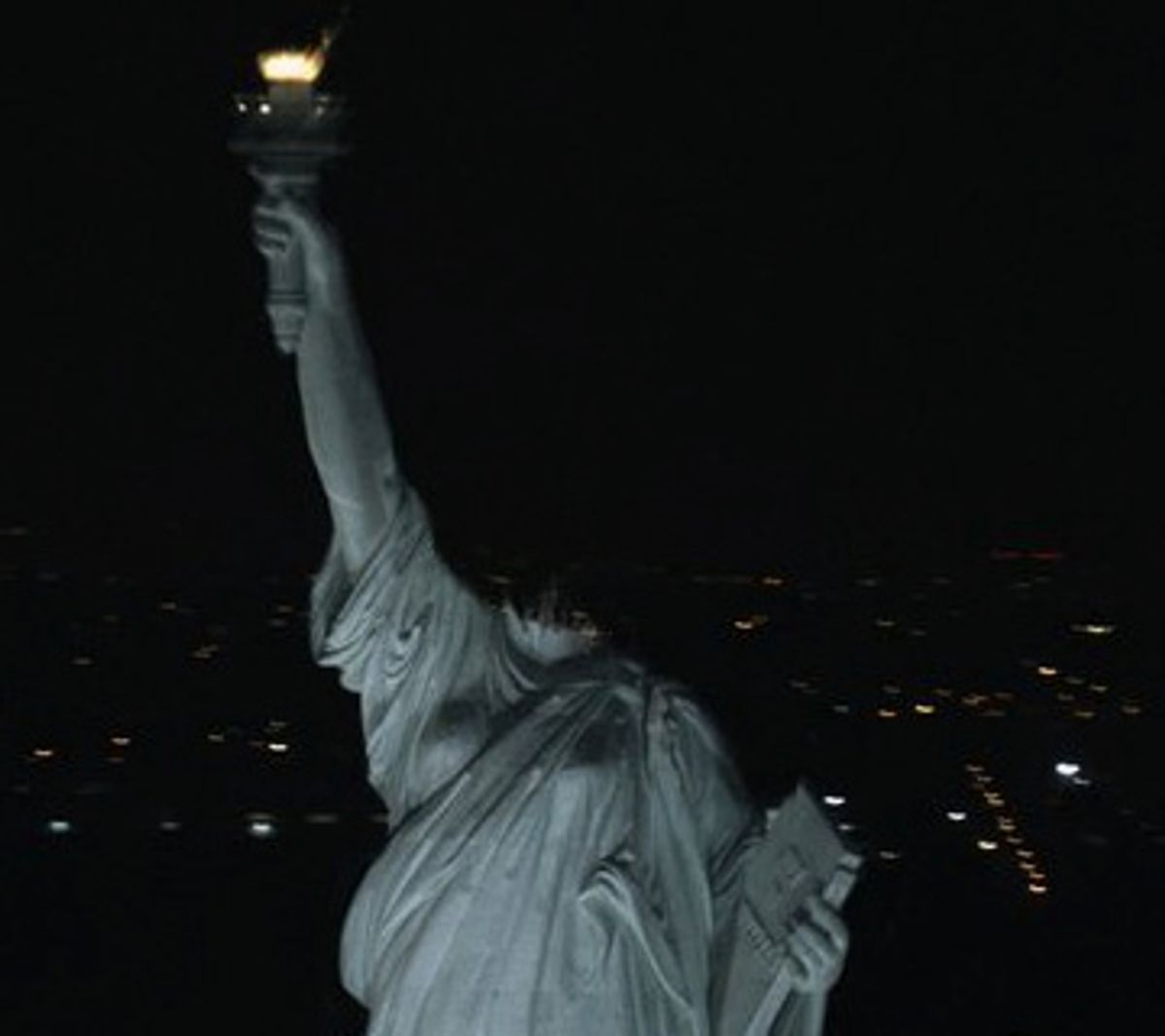 Because "Cloverfield" was produced by "Alias" and "Lost" mastermind J.J. Abrams, and because it's being sold to audiences -- and it is being sold -- through a viral media campaign instead of the more common hyperadvertising, there's a great deal of subterranean buzz about the picture. In "Cloverfield," a going-away party for a young man who's leaving the States -- specifically, his home in lower Manhattan -- to take a job in Japan is rudely interrupted when an angry sea monster (or perhaps just an angry East River monster) rises from the depths to wreak havoc on the city. It all sounds like fun -- until you have to sit through it.

Abrams and the movie's director, Matt Reeves, may think "Cloverfield" is revolutionary for the way it mimics the rough, homemade feel of home-video recording, and for the way it calls attention to our early-21st-century penchant for recording everything as it happens: We now use our camera phones as surrogate eyes instead of actually seeing; we interrupt whatever fun we're having to text our friends about how much fun we're having. But instead of skewering those tendencies, "Cloverfield" merely enlists them as a device; it pretends to examine how self-absorbed we are as a culture, only to be consumed by its own self-absorption. It's also badly constructed, humorless and emotionally sadistic -- surely the work of a genius, or at least a couple of guys who know what buttons to push. These days, those two things seem to be interchangeable.

"Cloverfield" opens with a test pattern and some official-looking Defense Department lettering telling us that we're seeing video footage recovered from "the area formerly known as Central Park." It's a chilling opening for its obliqueness alone. The movie's first few minutes show us a young couple flirting and cavorting in a nicely appointed Upper West Side apartment: This is footage they've shot themselves as they horse around. It's reassuring evidence of the everyday quality of our lives.

But there's more on that videotape, a record of terrible events that happened some three weeks later. Nearly the first third of "Cloverfield" consists of setup -- it's a leisurely and confident, perhaps too confident, way of opening up a movie. We learn more about the characters we saw in that earlier footage, Rob (Michael Stahl-David), who's being feted by his friends before heading off to that job in Japan, and Beth (Odette Yustman), a woman who should probably be Rob's girlfriend, but isn't quite. We also meet Rob's brother, Jason (Mike Vogel), and Jason's girlfriend, Lily (Jessica Lucas), as well as Rob's best friend, Hud (T.J. Miller), a rather annoying spud who's been charged with recording the partygoers' farewells to Rob, although he's continually distracted by Marlena (Lizzy Caplan), a raven-haired beauty who's shown up at the party -- his camera follows her woozily, as if struck by lovesickness.

It would be unfair to reveal too many of the details of "Cloverfield," but by now nearly everyone knows that someone -- or something -- lops the head off the Statue of Liberty and sends it rolling, like a forlorn bowling ball, down the streets of New York. That's a gripping, poetic image by itself -- so poetic that the partygoers and passersby who have gathered in the streets raise their phones in unison, like a high-tech Greek chorus, to snap pictures of it.

But from there, the picture becomes less intriguing and more numbing. There are very few, if any, touches of humor in "Cloverfield," but there's lots of screaming and lots of realistic approximations of human suffering: This isn't Godzilla cartoonishly chomping the heads off random citizens. The movie is unpleasant to the point of being unconscionable; it's so relentless that there's no suspense, nothing that makes us wonder what's going to happen next. The picture -- written by Drew Goddard -- does build dread, but not much else. And in places, it's very carelessly made: For the most part, we know it's Hud behind the lens, but in some later scenes, we have no idea who's manning the camera, as if that were a detail we shouldn't care about.

Maybe we're supposed to give Abrams and Reeves extra points for cleverness, for the way they've adapted traditional narrative into YouTube-style storytelling, using seemingly homegrown video footage to heighten the sense of immediacy. But we've already seen a far more effective version of that approach in Brian De Palma's Iraq war drama "Redacted," and George Romero's upcoming "Diary of the Dead" makes use of some similar techniques. It's no longer good enough to be among the first; you have to be an effective storyteller, too, and that's where Reeves, Goddard and Abrams fail.

Is "Cloverfield" trying to be a "fun" monster movie, or is it trying to say something about the way, post-9/11, we experience horrific events? I simply have no idea. There are many people who walk around thinking, "9/11 is the most dramatic, most significant event in our lives," just as there are others who think, "Big deal. It was only a matter of time until we were attacked on our own soil." If 1950s horror films were really about the communist threat, as we're constantly and needlessly reminded by film scholars, then why can't modern horror films mirror our own fears about real-life terrorism? There's no reason that they can't. But there's also no reason we have to accept the cheapening of real-life tragedy as a means of entertainment. "Cloverfield" harnesses the horror of 9/11 -- specifically as it was felt in New York -- and repackages it as an amusement-park ride. We see familiar buildings exploding and crumpling before our eyes, and plumes of smoke rolling up the narrow corridors formed by lower-Manhattan streets, images that were once the province of news footage and have now been reduced to special effects. Kewl!

I'm not saying those images should never be used dramatically in any way. But like all potent images, they deserve some care and respect, and some discretion. Why use them just for kicks, as a means to get a rise out of the audience as it recognizes something familiar and terrifying? "Cloverfield" takes the trauma of 9/11 and turns it into just another random spectacle at which to point and shoot. The picture's overconfident sense of immediacy is precisely what makes it so remote. Maybe we now live in a world where we record the moment first and feel it later. If that's the case, "Cloverfield" leaves us waiting to feel.