Mike Huckabee's affinity for religious extremism is no secret. But is biblical law at the heart of his presidential vision? 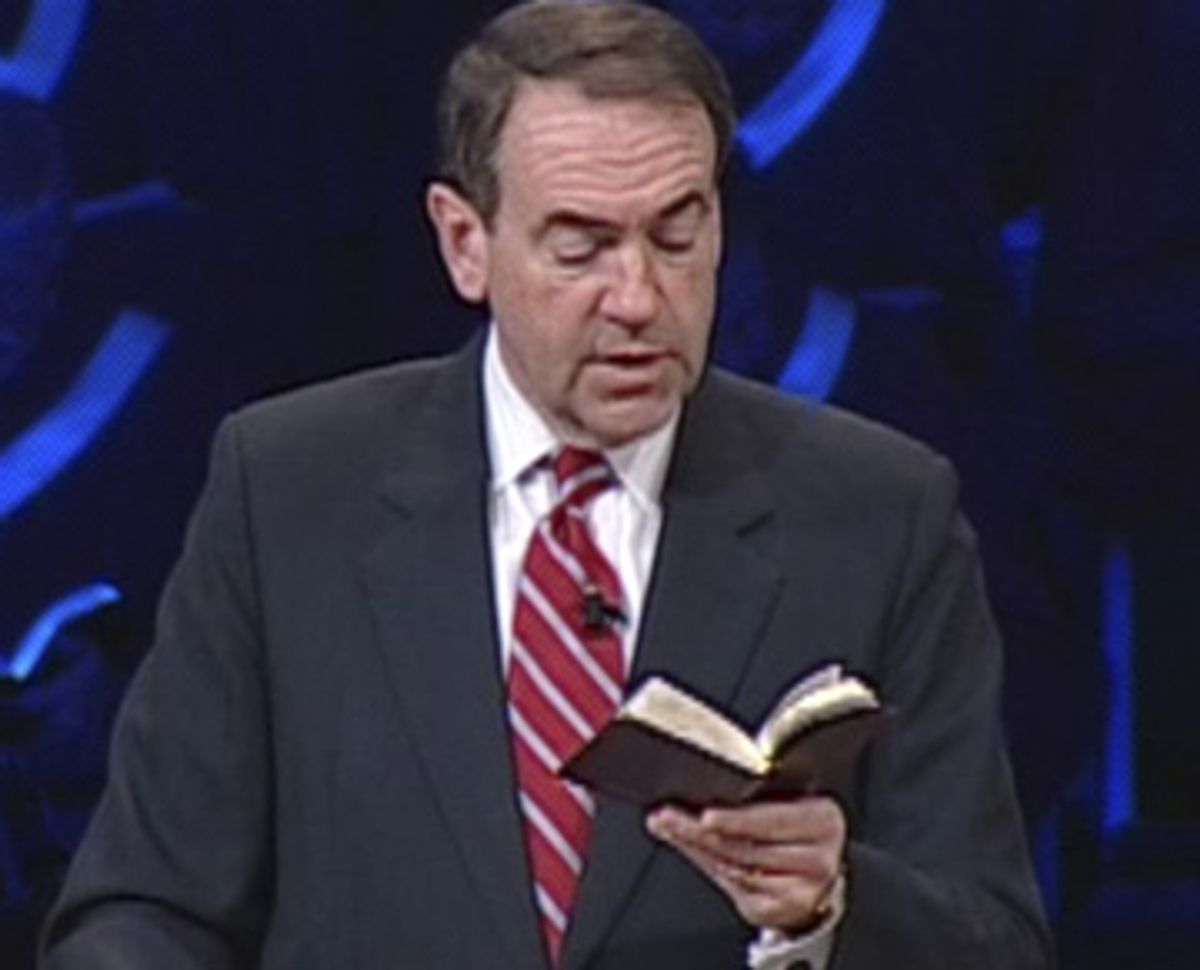 Behind the happy, healthy, guitar-strumming campaign style that has so besotted the national press corps, Mike Huckabee looks like something considerably less charming -- a zealous proponent of the "biblical" reformation of every aspect of American society.

If that sounds too extreme and aggressive to describe the smiling Huck -- who introduced himself to the country as "a conservative, but I'm not angry about it" -- then consider how he explained his urge to revamp the nation's founding document. At a public forum on the eve of the Michigan primary, while mocking Republican opponents who don't want to append a "marriage amendment" or a "life amendment" to the Constitution, he said: "I believe it's a lot easier to change the Constitution than it would be to change the word of the living God, and that's what we need to do is to amend the Constitution so it's in God's standards rather than try to change God's standards."

That outburst appalled many Republicans, who heard those words as an assault on traditional conservative and libertarian values. The next day on National Review Online, Republican speechwriter and strategist Lisa Schiffren complained: "Mike Huckabee is going to force those of us who have wanted more religion in the town square to reexamine the merits of strict separation of church and state. He is the best advertisement ever for the ACLU."

But those offending phrases may have had even deeper significance. Not so long ago, he attributed his rising political fortunes, after many experts had written off his campaign, to the hand of the Almighty. "There's only one explanation for it, and it's not a human one," he said. "It's the same power that helped a little boy with two fish and five loaves feed a crowd of 5,000 people, and that's the only way that our campaign could be doing what it's doing ... That's honestly why it's happening."

He later denied that he meant to suggest that God wants him in the White House. But his deliberate reference this week to conforming the law to "God's standards" sounds uncomfortably like the ideology sometimes known as "Christian dominionism" or "Christian reconstructionism," which declares that America, indeed every nation on earth, is meant to be governed by biblical law.

The looniest dominionists publicly insist that a pious government would inflict Old Testament punishments, including death, on blasphemers, pornographers, homosexuals, adulterers and even disobedient children. They constantly talk about their duty to institute biblical rule in the United States.

As a Southern Baptist preacher, does Huckabee accept that bizarre interpretation of Christian ethics? The answer is that he probably doesn't (or is too shrewd to say so if he does). But the clues to Huckabee's affinity for religious extremism have been lying in plain sight for a long time.

Back in 1998, when he was still serving as governor, he helped write "Kids Who Kill," a short book purporting to analyze the outbreak of school shootings by teenagers. His coauthor was George Grant, a well-known militant Christian reconstructionist author, activist and educator. That same year, the libertarian Reason magazine published an exposé of reconstructionism titled "Invitation to a Stoning," which identified Grant and quoted him on the movement's ambition for "world conquest." Scorning the moderation of other conservative Christians, Grant explained, "It is dominion we are after. Not just a voice ... not just influence ... not just equal time. It is dominion we are after."

Of course, Huckabee must have had no illusions about Grant's baroque worldview, since it is clearly reflected in their book. The school shootings were mere symptoms of American civilization in decline, they thundered, with communities "fragmented and polarized" by "abortion, environmentalism, AIDS, pornography, drug abuse, and homosexual activism." (Unlike his coauthor, Huckabee was too nice to call for the execution of gays. He merely wanted to place them in detention if they tested HIV-positive.)

As governor, he also promoted the faith-based programs of a reconstructionist minister named Bill Gothard -- and even boasted that he had gone through Gothard's "basic program" himself. More reputable evangelicals consider Gothard to be a cultish fringe character, but he has built an enormous empire, which depends on funding from local and state governments to bring his authoritarian version of the Gospel to prisoners, police officers and welfare recipients, among others. He experienced a moment of unwelcome notoriety recently, when the Denver Post revealed that Matthew Murray, the 24-year-old gunman who killed four people at two Christian centers in Colorado in December, had been subjected as a teenager to Gothard's superstrict "home-schooling" programs.

Huckabee's close connections with the likes of Grant and Gothard date back a decade or more -- and his rhetoric has surely changed, if not his views. He no longer denounces environmentalism, for example, at least not publicly. But he still maintains contact with reconstructionist leaders, some of whom are supporting his presidential candidacy. Just last month, Huckabee attended a campaign fundraiser at the Houston home of Dr. Steven Hotze, who became one of the nation's most notorious advocates of dominionist ideology when he led the religious right's takeover of the Texas Republican Party. Huck's old friend Gothard was also at Hotze's home, along with a bevy of extremists including Rick Scarborough, author of "Liberalism Kills Kids" and "Mixing Church and State."

When columnist Robert Novak mentioned the event, he described Hotze as a leader of the "highly conservative Christian reconstructionist movement," a description that aptly encapsulates the ignorance of many mainstream journalists (and the aversion to unpleasant realities of many right-wing journalists). There is, of course, nothing "conservative" about reconstructionism, which demands a radical repression of liberty and the imposition of biblical law by "godly men."

Years before he became a Republican Party activist, Hotze played a role in the Coalition on Revival, one of the early organizations promoting reconstructionist thought among evangelicals. The coalition's 1986 "manifesto for the Christian church" urged believers to accept the Bible as "the final measurement and depository of certain fundamental facts of reality and basic principles that God wants all mankind to know in the sphere of law, government, economics, business, education, arts and communication, medicine, psychology, and science. All theories and practices of these spheres of life are only true, right, and realistic to the degree that they agree with the Bible."

In 1997, Huckabee expressed similar sentiments in a book titled "Character Is the Issue: How People With Integrity Can Revolutionize America," warning starkly that in the struggle between secular and sectarian, "one worldview will prevail." Echoing the grandiose authoritarian cadences of his reconstructionist pals, he wrote:

"When two irreconcilable views emerge, one is going to dominate. Ours will either be a worldview with humans at the center or with God at the center ... The winning worldview will dominate public policy, the laws we make, and every other detail of our existence."

Does Huckabee still believe that his narrow version of Christianity must dominate every detail of human existence in this country? He doesn't like to answer hard questions about the intersection of his faith and his politics, but it is long past time that somebody demanded a straight answer.