Katie Holmes livens up this lackluster caper film -- especially in the scenes where she sticks money in her undies. 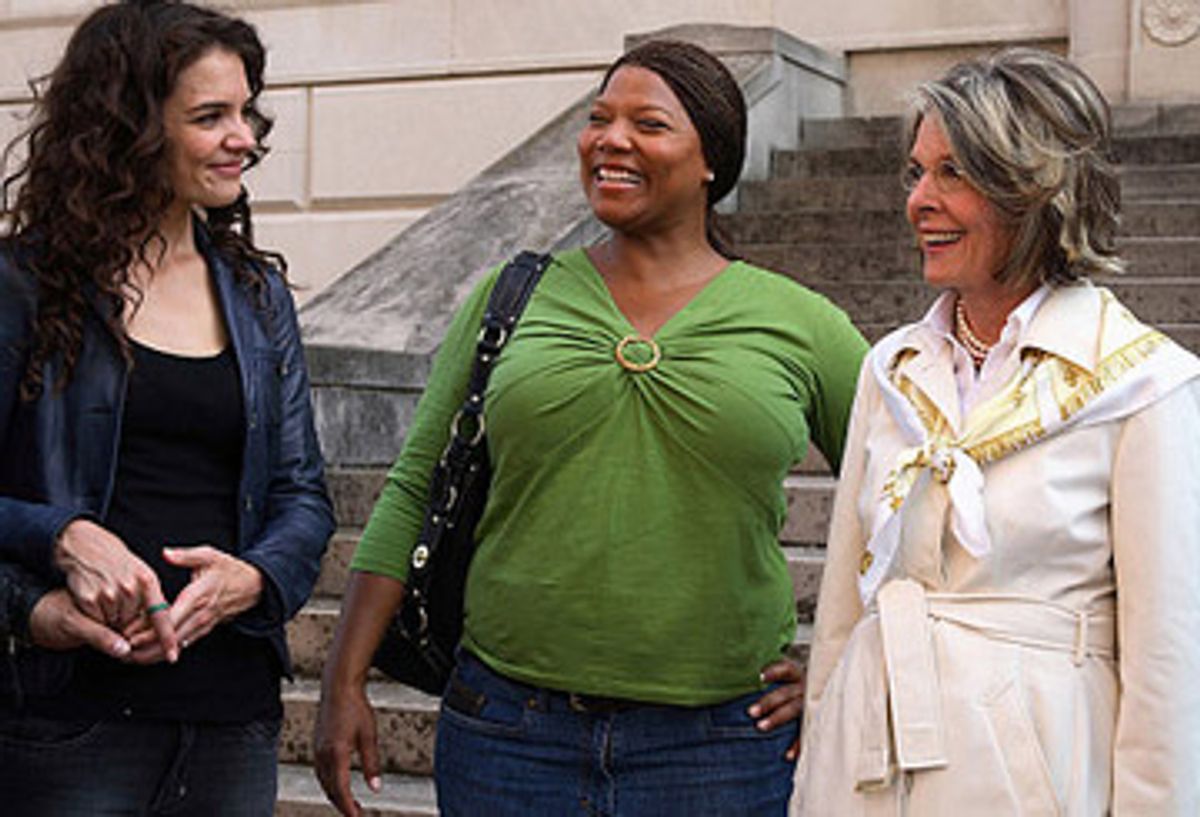 If the theory of evolution applied to movies, there'd be no such thing as a sluggish caper film. Callie Khouri's "Mad Money" flaps its useless little fins desperately in a bid to incite our interest, and our laughter. But the picture has no legs, no style, no sense of movement other than the meandering, dawdling kind. The script (by Glenn Gers) has many points to make about the greediness of consumer culture, the pleasures of sticking it to the Man, and the heights women can achieve when they work together (if you consider larceny anything to aspire to), and the movie ticks them off with dutiful proficiency. Even so, I can't discern any real reason for "Mad Money" to exist, other than as a vehicle for three appealing actresses, Diane Keaton, Queen Latifah and Katie Holmes. And if this is the best they can get, then what, exactly, are the privileges of stardom?

Keaton plays well-manicured suburban matron Bridget Cardigan (why not Bridget Shrug?) who suddenly finds herself in need of gainful employment after her husband, Don (Ted Danson), loses his big corporate job. The couple is nearly 300 grand in debt, and they face the loss of their comfy mini-mansion located in the environs of Kansas City (although the picture was shot in Louisiana). Bridget, formerly a stay-at-home mom, has never had to work outside the home, so she's a bad typist and has no waitressing experience (although, as she volunteers brightly to one stony-faced prospective employer, she does have a degree in comparative literature). The only job she can get -- her cleaning woman puts her onto it -- is mopping and buffing at the Federal Reserve Bank. There, she meets two other women employees who could use a little extra cash: Nina (Latifah), a single mother who'd like to offer her kids a better life, and Jackie (Holmes), a ditzy free spirit who dreams of traveling the world but who has to settle for sharing a trailer-park home with her husband, Bob (Adam Rothenberg), who works in a meat-processing facility.

Bridget comes up with a bold but not particularly ingenious low-tech scheme for smuggling old, worn-out bills, destined for destruction, out of the bank. The most thrilling segment of this plot involves the stuffing of much crumpled greenery into the women's underwear. They then waddle past the bank guards in their bumpy skivvies, hoping to escape detection.

Because their scheme works so well, they keep going back for more, and when Latifah, the most principled of the three, decides that enough is enough, Bridget, who's lived her whole life in the comforting glow of the dollar sign, urges her comrades to stick with the plan. Later -- much later -- it dawns on Bridget that Nina, if caught, would lose her two children. But before that happens, we're not supposed to let Bridget's greed and self-absorption bother us much. This movie is designed to be fun, and its intentions are signaled to us over and over again, as when the women jump around on a bed, giggling and flinging old, dirty money around in a wanton display of pure idiocy.

Khouri made a name for herself as the writer of "Thelma and Louise," an allegedly feminist picture that congratulated its lead characters for engaging in the same brutish, self-serving behavior it decried in men. She also adapted and directed "Divine Secrets of the Ya-Ya Sisterhood," an inane picture calculated to make women laugh and cry together, united as we remind ourselves that we all have feelings! And vaginas!

The sisterhood message in "Mad Money" may be more muddled, but it still manages to seep through the movie's clammy surface. Keaton looks lovely here -- these days, even in the lousy roles she's been getting, she's at least interesting to look at -- but the movie makes virtually no use of her terrific timing. Latifah is equally radiant, but the movie constrains her charms instead of showcasing them. Holmes, as a dippy, trippy hippie chick, comes off best here: Of these three performances, hers at least has a pulse. Holmes, before her abduction and reprogramming at the hands of Ming the Merciless, was often a charming actress, and in pictures like "Pieces of April," she showed the promise of becoming quite a good one. If nothing else, "Mad Money" suggests that we haven't totally lost her. If she can bring a spark of mad joy to the act of stuffing money down her underpants, there may be hope for her yet.