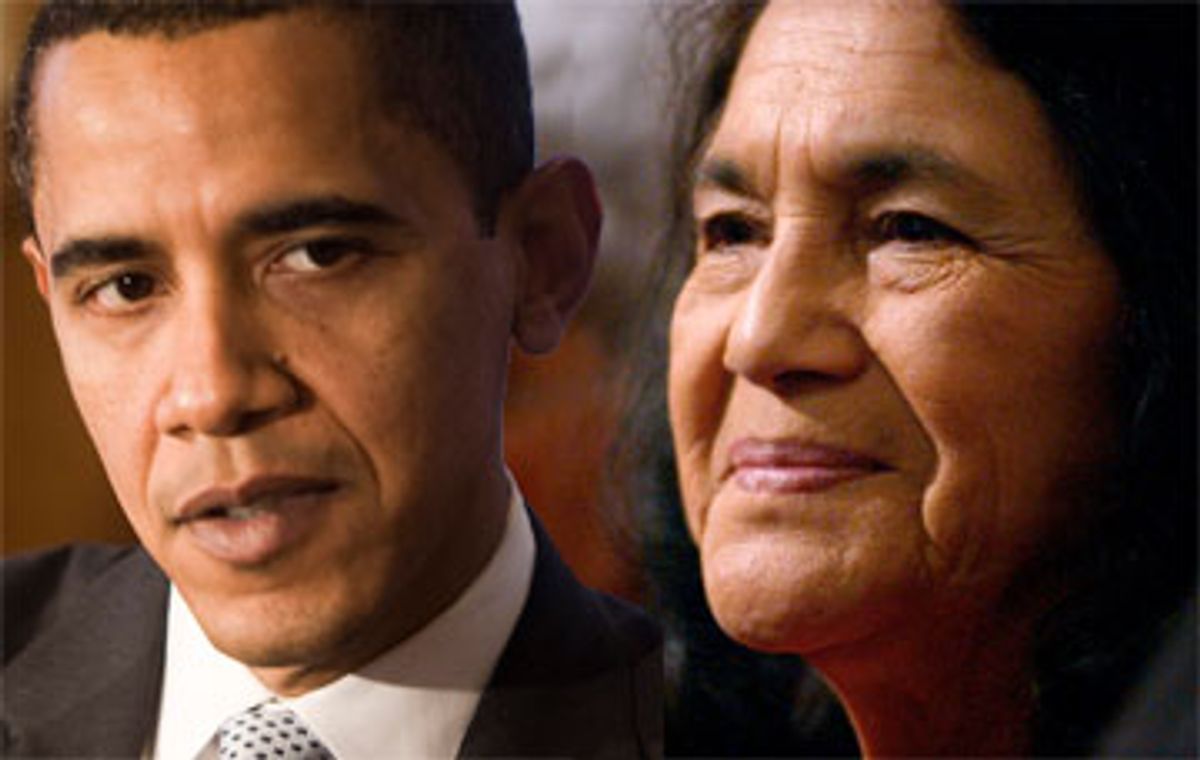 LAS VEGAS, Nev.-- On Thursday federal Judge James Mahan refused to block nine casinos here from serving as caucus sites. But the battle over the politics behind the lawsuit to stop casino voting goes on. The at-large casino precincts are only nine out of a planned 520 caucus locations, but they've been the scene of a ground war between the Barack Obama and Hillary Clinton forces that's created new racial friction (after a brief truce in Tuesday's debate), as Latino partisans of both candidates trade insults and charges of voter suppression.

The latest flare-up has to do with a Spanish-language ad sponsored by UNITE HERE, the parent organization of the powerful Culinary Workers Union, which endorsed Obama. If the ad was in English, it would be a bigger story. It opens with a voice saying ominously, in Spanish, "Hillary Clinton doesn't respect our people," and accuses her of being behind the lawsuit to stop the at-large caucus sites, and trying to disenfranchise Latino workers (For the record, Clinton was not behind the lawsuit, but some of her supporters were). "Unforgivable! Hillary Clinton has no shame!" (You can hear it here.)

On Thursday Latino Clinton supporters asked Obama to denounce the ad, and his campaign declined. Friday the Clinton camp escalated its complaint (and John Edwards, for the record, joined the chorus). In a conference call with reporters, Clinton campaign chair Patti Solis Doyle said, "I urge the Obama campaign to condemn this ad immediately." Los Angeles Mayor Antonio Villaraigosa said Clinton had "a track record second to none" in support of Latinos as well as unions.

But United Farmworkers' Union co-founder Dolores Huerta went further, accusing the Culinary Workers Union of intimidating Clinton supporters and keeping them away from the caucuses. Union leaders are telling Clinton backers if they don't vote for Obama, "they won't get transportation, they will be fired," Huerta said. She also argued that Clinton has a "cultural, political and social relationship with the Latino community, which Senator Obama does not have." Latinos call Clinton "Hilaria," Huerta said, adding derisively that they call Sen. Obama "Como se llama?" (as in "What's his name?")

Although charges that CWU members are "intimidating" Clinton workers have flown this week, they are anecdotal, and there has only been one documented, high-profile case of such mischief, first reported by the Las Vegas Sun. Obama campaign spokesman Bill Burton says the charge was later "debunked" by the Sun, but that isn't the whole story. Now the woman at the center of the debate, Paris Hotel and Casino worker Sylvia Antuna, says the Sun's "debunking" got the story wrong, and she confirmed the original account of her intimidation by a union rep in an interview. The convoluted story behind her story, and the number of partisans who've gotten involved to confirm or dispute it, shows how intense the ground war has gotten here.

Antuna's complaint was first brought to the Sun by Clinton supporter and Paris cook Marie Angers, and her son Matt DeFalco, who also works there. They told of watching Antuna be threatened by a CWU rep that if she didn't support Obama, she couldn't caucus. Sun reporter Michael Mishak did a story on their account, but according to Mishak, Antuna didn't quite confirm it when he talked to her; she ultimately put the exchange between her and the Obama-supporting union rep down to "miscommunication." CWU communications director Pilar Weiss attributed the conflicting stories to the fact that the union rep spoke Spanish -- though, in fact, Antuna speaks Spanish, too. (Weiss did not return a call seeking comment on Antuna's story.)

Pro-Clinton blogger Taylor Marsh picked up the tale, relying on Marie Angers' account. But so far, Antuna has been silent since talking to the Sun. Reached by telephone Friday afternoon, at first she didn't want to talk. "I'm just afraid to say anything," she said. But then the CWU shop steward of 24 years agreed to tell her story.

"All I want to do is tell you how it went. The whole week [union reps] were coming to the cafeteria, trying to sign up voters, some independents, some Republicans, trying to get them to endorse Obama. I would try to eat, and it was 'Obama, Obama, Obama.' I'd say, 'Leave me alone, I'm an independent, I don't know who I want.' But then I really wanted to go to the caucuses, I was confused about who I want to vote for and I wanted to experience it all myself. And they were making it sound like I had to register as a Democrat to caucus.

"So I finally said, 'Can I please have a paper to change my party?' I sat down and started filling out the paperwork, and the woman said, 'Sweetie, you're gonna support Obama, right?' I said, 'No, I'm undecided,' and she said, 'Well, you can't go if you're not supporting Obama.' And she took the papers from my hands. It was so embarrassing, everyone had their eyes on me.

"Marie and Matt were sitting there and they said, 'Sylvia, you don't have to do that, anyone can go to the caucus.' Even my actual boss had asked me if I wanted to go. But [the union rep] said, 'No, honey, you can't go, because you're not supporting Obama.'"

When the Sun's Mishak called Antuna, she says, "I didn't know it was going to happen like that, he kept asking me, what do you mean this, what do you mean that? He twisted my words." Asked if she said it was just a "miscommunication," she insisted, "I didn't say anything like that." Mishak stands by his story, saying that it was clear Antuna "was upset by the incident" but that by the end of their conversation, "she portrayed it more as confusion than anything else."

Still, despite Huerta's claim of widespread voter intimidation by the CWU, I haven't found another documented story like Antuna's. Matt DeFalco says at Paris, the union is only helping Obama supporters register to vote and get time off work. He says he distributed Clinton leaflets in the Paris cafeteria after the Antuna incident "and people were like, 'are you seriously passing those out here right now?' People are being intimidated into voting for Obama." But Mishak says he's investigated every voter intimidation claim "the Clinton campaign has been pushing" and that nothing, except perhaps Antuna's, deserves the term "intimidation." He adds: "It's surprising to me that people would be surprised a union would be saying to its members, 'You have to endorse our candidate. We need to win.'"

Why so much attention to one story of intimidation at one of the nine of 520 caucus sites? Depending on the results Saturday, we'll be puzzling that out for a long time. Two things seem clear: The caucus rules are an only-in-Nevada innovation that, upon close scrutiny, raise questions about fairness: Many people ask why Vegas Strip workers should have an easier time voting than Saturday workers in other regions. Equally clear, though, is the fact that nobody was raising those questions, at least not publicly, until the CWU endorsed Obama.

One of the biggest outstanding questions is exactly how many delegates the at-large precincts will be awarded. Former President Clinton complained that because of the state party's formula, Vegas Strip workers' votes could count "five times" more than everyone else's. I asked the Nevada Democratic Party's deputy executive director Kirsten Searer if that was true, and she patiently tried to explain the process to me. (The short answer is, it conceivably could be, but probably won't be.)

In traditional Nevada precincts, the party awards delegates based on the number of registered Democrats, regardless of how many or few turn out. Because the casino precincts have no history of registered voters, the party decided to award delegates in a complicated formula based on turnout. Clinton's claim, she said, is "based on an unlikely situation: that every Democrat registered turns out in the neighborhood caucuses, but that there's low turnout in the at-large caucuses." Searer sounded a little tired of the complaints about the process. "We had an open and transparent process," she says, adding she was "surprised at the timing" of the lawsuit -- six days before the caucus, after the CWU endorsement -- given that the state party approved the rules last March.

No one knows what to expect on Saturday. Given how new the process is, officially Searer says the party looks to early Iowa caucuses for guidance on turnout -- until 2004, when turnout grew in Iowa, roughly 10 percent of registered Democrats used to caucus. With 400,000 Democrats registered in Nevada, that means a turnout of 40,000. "Anything more would be gravy," Searer said. In an expansive moment, Senate Majority Leader Harry Reid predicted 100,000. For all the focus on the CWU endorsement, no one knows how many of its 60,000 members are registered to vote.

But after the battle over the UNITE HERE ad and the CWU's moves, maybe the most interesting question about Saturday's results will be how many Latinos turn out, and whom they vote for. Huerta's comments seemed unfair to Obama; the UNITE HERE ad was clearly unfair to Clinton; we'll get to see what Latino voters believe tomorrow. For her part, Sylvia Antuna says she no longer plans to caucus. "I think I'll wait and vote in November. It's too depressing."

I'll be covering the caucus at the Paris Hotel and Casino at-large site, and I'll have more when it's over.