The battle for Nevada

Clinton beats Obama as candidates bicker over the final delegate count. Will the ethnic tensions inflamed by a rough caucus fight haunt the Democrats? 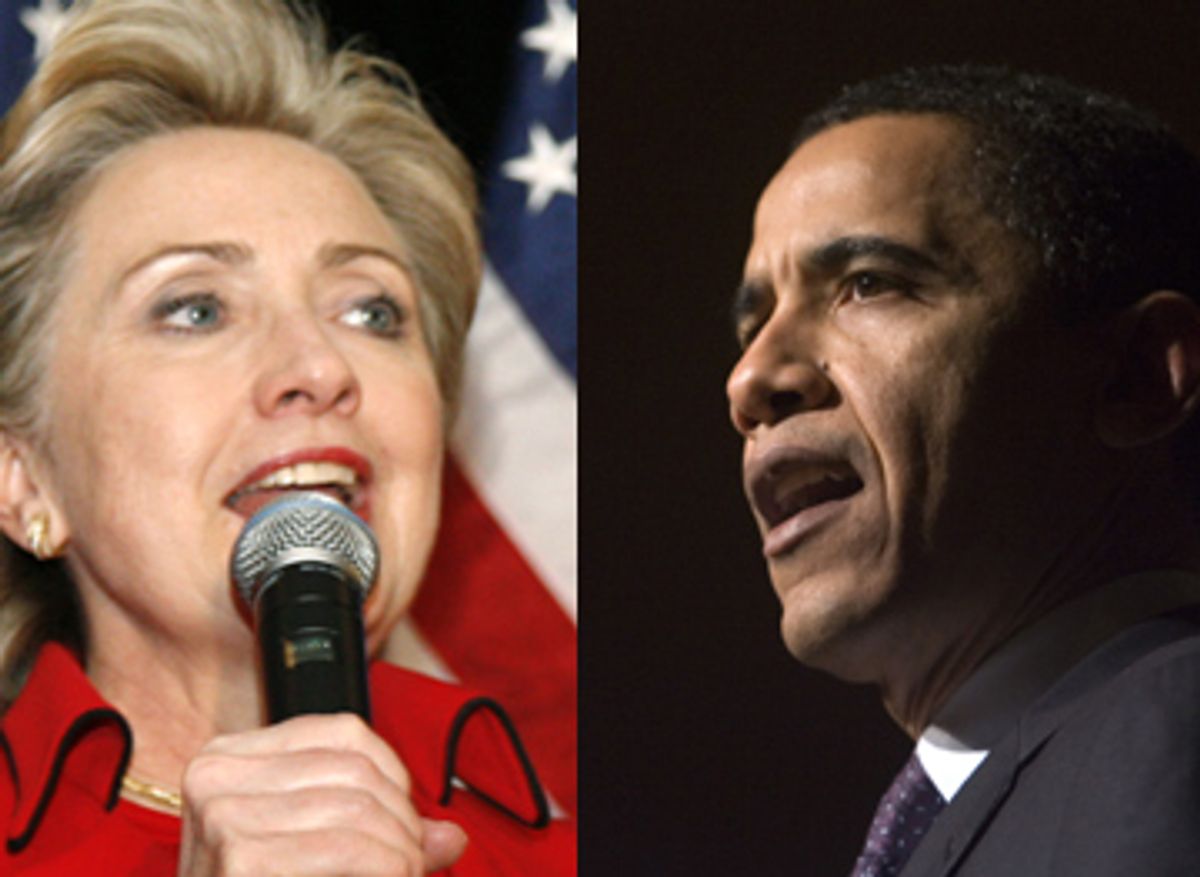 Hillary Clinton won the Nevada popular vote, and Barack Obama's campaign is claiming he won more delegates, but it was hard not to worry that the Democratic Party could wind up the loser as I sat watching a nasty caucus battle at the Paris Hotel and Casino Saturday afternoon.

At the end of the day, having called around to Democrats and reporters who were at other caucus sites, I'm pretty sure I witnessed one of the most extreme and ugly standoffs between Clinton and Obama supporters. But it's still a window on the tensions in the Democratic Party as it faces a future in which its nominee will almost certainly be either African-American or female. And it's unsettling.

The good news for Democrats is that the party boosted turnout beyond even Harry Reid's wildest dreams. More than 114,000 Democrats caucused Saturday, when the party was saying on Friday it thought 40,000 was a realistic estimate. While Nevada Democratic Party officials deny the Obama camp's claim that its candidate won more delegates, saying delegates won't be chosen until county and state party conventions, it's likely the final delegate count will be close. But the results showed disturbing splits in the party: Latinos broke 2-1 for Clinton, according to CNN entrance polls, while African-Americans went almost 4-1 for Obama. Whites favored Clinton over Obama 52-34, women backed her 51-45 (and women made up 59 percent of Nevada voters). Meanwhile, voters under 45 supported Obama 48-34; those over 45 went for Clinton 54-33.

I saw it all at the Paris: It was union member vs. union member, men against women, blacks against Latinos. An AFSCME worker (she wouldn't give me her name) was riling up the Clinton crowd, and got into a shouting match with an Obama supporter. "Hillary Clinton has never walked a picket line in her life," shouted Ray Wadsworth, an African-American pantry worker at Bally's casino who was just laid off. "I've walked picket lines with Hillary Clinton," the AFSCME woman shouted back. A Latina worker at Paris started yelling at Wadsworth: "Show respect, she's a woman!" At the worst of it, Wadsworth and other Obama supporters were yelling insults about Bill Clinton and Monica Lewinsky, while the heavily Latino Clinton caucus was trying to shout them down with chants of "Hillary!" In the end only a handful of Latinos seemed to be among Obama's 98 caucus supporters; African-Americans were, by comparison, better represented in the Clinton delegation, but most caucused for Obama. (Only five caucus-goers supported John Edwards, which seemed to herald his dismal showing in the caucuses overall; he got only 4 percent of the vote.)

I watched the caucus battle with one of my oldest friends, someone I attended the 1984 Democratic convention with, a California labor organizer and politico who happened to be attending as an official Obama observer. Back then, in San Francisco, we cheered speeches by Jesse Jackson and Geraldine Ferraro together, so happy for the step forward both candidates provided to the party. There was little to cheer today. "Have you ever seen anything like this?" he asked me, with some alarm. I had to tell him no. Maybe we have to pass through this state of bitterness and chaos to get to a multiracial promised land, but it's not going to be a fun trip.

There's some reason to think the Paris situation was an only in Las Vegas aberration. The ugly atmosphere was certainly fueled by overreaching by the Culinary Workers Union, which faced accusations of strong-arming workers into supporting Obama. While Bill Burton, Obama communications director, told me those charges had been "debunked" on Friday, it was clear they were still roiling workers. I interviewed Sylvia Antuna on Friday, after her account of CWU intimidation was dismissed by both the Las Vegas Sun and the Obama campaign. Even if she was just one potential voter, her tale of coercion by CWU Obama supporters was disturbing. But it was clear on Saturday that she wasn't alone. "It has been really bad," cocktail server Nicky Nicolescu told me Saturday before the caucus began. "We could have a black president or a woman president, it should be great, but the union made this deal for power." Nicolescu said her boss was more help getting her free from work to caucus than the union was.

"I think the union is gonna be very surprised," Paris banquet server Patricio Gajardo told me a few minutes later. "They misjudged the Hispanic population. We don't think with an accent," he said, adding, "Write that down." I wasn't clear what he meant, and he elaborated: "A lot of us come here, we don't speak much English, they think we're naive, and they take advantage of us. We may never lose our accent, but we don't think with an accent; we understand what's going on." Paris worker Pauline Tilley added: "I came here almost 40 years ago, I'm a citizen, I still have my accent, and I support Hillary!" Tilley and Gajardo told of witnessing CWU leaders harassing Clinton supporters, refusing to help them get off work to caucus, removing Clinton fliers from the cafeteria. "We had to get H.R. to tell them to put them back," Gajardo said. In the end the Paris caucus site broke 2-1 for Clinton.

When I got back to my room at the Paris after the caucus, I found five housekeeping workers speaking in Spanish about Clinton's surprising win. Except it wasn't surprising to them: All had caucused for her. One of them told me she's a CWU leader who was appalled at the union's decision to support Obama; she asked that I not use her name. "They were going to stay neutral. They wound up pushing too much. Yesterday, when Chelsea Clinton came here, we had shop stewards saying, 'Kick her out! Kick her out!' I thought that was real rude; it sounded dirty to me." This Paris worker was also appalled by the Spanish-language ad sponsored by CWU's parent, UNITE HERE, that claimed Clinton didn't "respect" Latino people. "Hillary's been there for us. They just pushed too hard. It was dirty."

While not directly defending the UNITE HERE ad, California state Sen. Gilbert Cedillo, attending the Paris caucus as an Obama observer, pointed to the context of the lawsuit that tried to stop the at-large casino voting. While Clinton said she didn't support the suit, she never opposed it, either, and it was filed by some of her supporters. The ad, he noted, "was separate from the Obama campaign, but clearly labor is under siege. The reaction seemed to be one that is sincere, and comes from having to fight for the union's very existence here. People were genuinely shocked at what they saw as an effort to suppress their voice, not by an employer, but by someone who had been courting their endorsement." Cedillo believes Obama will do better among California Latinos, though he was dispirited by the Paris vote. "He's the son of an immigrant, he supports the Dream act, he supports driver's licenses" for undocumented residents, Cedillo said. "We know his vision, as well as his words and deeds, and we need his leadership."

There was more to Clinton's win than the CWU endorsement backfiring, of course. On Friday morning I saw her in a small group setting billed as a "round table," with about 40 workers and a few invited guests -- and 200 reporters -- at A&B Printing in Las Vegas. A small union print shop run by two women partners, Cathy Gillespie and Barbara Allan, it was a perfect setting for Clinton. She fielded questions from a multiracial crowd on healthcare, illegal immigration and education with her trademark detail, which can be mind-numbing in big speeches but worked in this small group.

She also blasted Obama without naming him for remarks that seemed to praise Ronald Reagan and Republicans, which may, in the end, have been as detrimental to his campaign as the CWU excesses. "He thought Republicans had better ideas than Democrats in the last 10-15 years? To shut down government and drive us into debt?" The crowd loved it. Allan, who introduced herself to me as Gillespie's life partner as well as business partner, said the pair moved to Las Vegas from Syracuse, N.Y., and "we've just always supported Hillary." But Clinton won support from Gregory Bullock, an African-American printer who came in undecided, and asked her, "What are you going to do for America?" A&B employee Sandra Agudelo, 27, was beaming after Clinton let her ask one last question (a softball about how she would give "voice" to women across America). "She's the next president," Agudelo told me.

This was a bewildering day, and we'll be sorting it all out for a while. There was some irony in seeing the two camps suddenly switch sides, with Clinton praising the results in the at-large casino precincts, which some of her supporters had complained made a mockery of democracy. (She won seven of the nine casino sites, according to the Las Vegas Sun.) Meanwhile, the Obama camp hailed the delegate boost its man got as a result of Nevada party rules weighting rural voters' ballots over urban voters -- the very people they were defending when backing the at-large casino precincts. On the other hand, whether the Democratic base likes it or not, it may be that Obama has a rare and valuable gift in pulling in red-state voters and others who haven't been Democrats in a while, or ever. We'll figure that out as the primary process unfolds.

Still, the battle of Paris will stay with me, and both candidates' campaigns should look closely at what went on here, and try not to repeat it as the campaign moves to other diverse states. Bally's casino bartender Jennifer Blair came into the caucus undecided, and left that way -- only bitter and disgusted. "They're trying to flip the state from red to blue? This is how they do it?" she said, blasting her union. But she wasn't happy with the Clinton supporters' behavior, either. "This all got too corrupt. We're going to have to work together. This is gonna cause a lot of conflict for a long time." She was talking about her union and her workplace; Democrats have to hope her words don't apply to the party.