Disguised as Magnetic Fields and Cat Power, Stephin Merritt and Chan Marshall are still playing games with the singer-songwriter archetype. 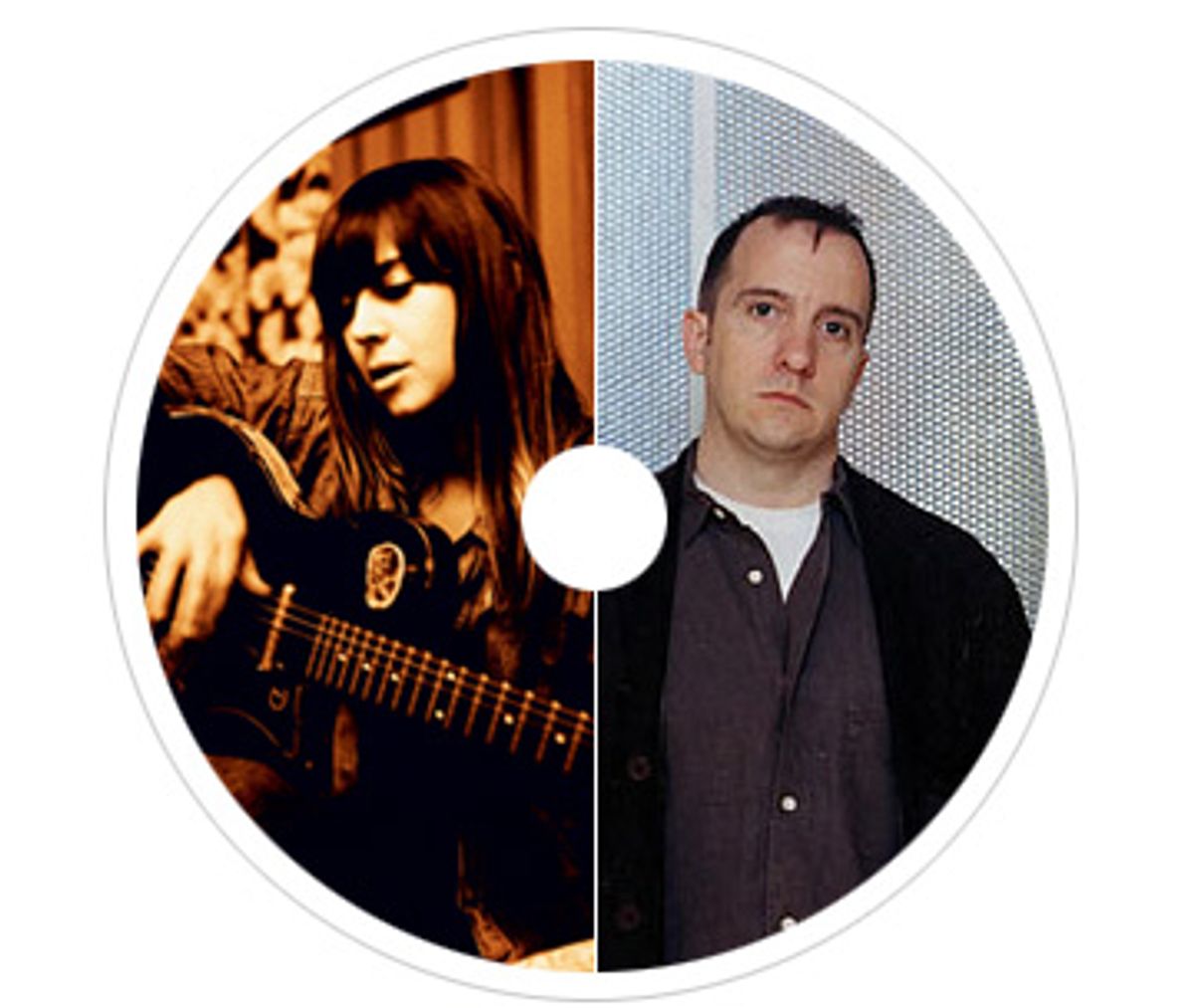 Over the last 17 years, Stephin Merritt, who performs under the name the Magnetic Fields, has written songs about a deep-sea diver, the devil, William Tell, a bunny rabbit and a beheaded chicken. He's released a three-disc romantic epic, "69 Love Songs" (1999), and a record called "i" (2004), on which eight of the 14 tracks began with the first-person pronoun. Since then, Merritt has assured us that not one of those songs was autobiographical: "Most of everybody's songs are in the first person," he told Salon. Merritt's foghorn mumble is resolutely emotionless, even when begging -- say, on 1994's "Take Ecstasy With Me" -- and though there are hundreds of photos of him out there, you'll never catch him doing anything so revealing as cracking a smile. Merritt is a prolific auteur ("Distortion," the Magnetic Fields' eighth studio album, is out this month), and his aversion to confession has served him well. He's the anti-singer-songwriter.

The breathy rock singer Chan Marshall, too, employs a stage name -- Cat Power -- and like Merritt, often titles her albums for their concept. Her newest is called "Jukebox," a covers record that is the de facto successor to her "Covers Record" (2000). Both artists come from an early '90s class of independent musicians (including the Mountain Goats, known to friends as John Darnielle, and Smog, born Bill Callahan) with the ambition to subvert the first-person folk paradigm, in part by pretending to be someone else.

Aging, though, tends to trump coyness, even in indie rock; these days, Bill Callahan records under his own name, and Darnielle raids his real-life childhood for inspiration. Yet Marshall and Merritt -- who together have indulged every kind of make-believe there is -- remain more evasive than ever. "Distortion," in the great abstruse Magnetic Fields tradition, is an uncharacteristically loud record conceived as a sonic homage to the Jesus and Mary Chain's landmark noise-pop record "Psychocandy." On it, Merritt variously channels a necrophiliac, a drunk, a nun, an ax murderer and a prostitute. Making things even more confusing, half the record is sung by Shirley Simms, a collaborator on "69 Love Songs." On Cat Power's "Jukebox," which includes covers of songs by Nina Simone, Joni Mitchell and Hank Williams, Marshall pours herself into people as wildly distinct as James Brown and Bob Dylan. Still, now that both are grown up and all -- Merritt's 42, Marshall 36 -- one might well ask: Why the masquerade?

In Marshall's case, the dodge always seemed born of necessity. Her biography is notoriously fraught: The daughter of an itinerant musician, she once told Salon she spent her childhood "in the tobacco fields of North Carolina." As a performer, she's continued her family's erratic tradition, famously suffering from a paralyzing stage fright. Well known before she was anywhere near comfortable onstage, Marshall has had the dubious pleasure of having hundreds of fans on hand to watch her gradually become accustomed to her own live show. When she recorded "The Greatest," the 2006 Southern soul album she made in collaboration with several legendary session musicians, she was praised not for the resulting record, but for taking the supposedly brave step of making herself accountable to professionals. Whatever. The real wonder was that, after being patronized for so long as a damaged naif who needs our help, she was still making records at all.

Marshall's seeming fragility has always suited her profession -- whether it be posing for Chanel, in her day job as a model, or sitting at a piano later that night. When, on "The Greatest," she sings "lived in bars/ and danced on tables," it does not sound like a happy memory. Her audience probably would have revolted if it did: Marshall's torchy appeal has everything to do with the uncommon sadness in her voice. And when, finally, Marshall learned to be at ease in front of other people, a long-suppressed suspicion began to dawn: Maybe the Cat Power persona was less a defense mechanism than its exact opposite. Crazy on a stage, Marshall was free to be sane off of it.

Back in 2000, as she was just becoming a star, Marshall covered the Rolling Stones' "Satisfaction." Where the Stones had indelibly flushed every inch of the song with a visceral, anything-goes sexual desperation, Marshall merely sang it the way she sang everything else. In doing so -- in tangling with a song that so resisted her typical laconic line reading -- she found the last missing shreds of her voice: comatose, desexualized, roughed-up. Eight years later, on "Jukebox," she finally does sound satisfied -- a coup for Marshall, but an ominous sign for Cat Power, who here sings James Brown's "Lost Someone" like it's the best thing that ever happened to her. Sinatra's "New York, New York" is stripped of its stale Yankee Stadium scent and sent downtown to the Bowery Hotel for a shower; in the next room over, Dylan's taking a nap, and later that night, on Marshall's one new original, "Song to Bobby," the two have a tender "Lost in Translation" drink together at the hotel bar. It's a wonderful life for those who can live it -- even if 99 percent of her audience can't. Her newfound comfort and glamour, on "Jukebox," can often seem like our loss.

And yet there's "Metal Heart," a Cat Power cover of a Cat Power song, originally from 1998's "Moon Pix." The first "Metal Heart" epitomized everything Marshall was then assumed to be: digressive, rambling, wispy to the point of dissolution. The song had a beautiful melody, but you had to believe in Marshall as an artist before you could even begin to hear it. "Jukebox's" "Metal Heart," meanwhile, beats to life behind a crystalline piano vamp and ramps up so emphatically that when her backing band, the Dirty Delta Blues (composed, among others, of the Blues Explosion's Judah Bauer and the Dirty Three's Jim White), kicks in behind her, the crescendo feels as if it's been building since the day she first wrote it, 10 years ago.

Elsewhere, though, the collision between a newly reborn Cat Power and the trio of women who helped birth her in the first place -- Billie Holiday, Janis Joplin and Joni Mitchell -- feels anticlimactic. What pull there is in "Jukebox" comes from Marshall once again reinventing herself. It no longer seems as if she's going to melt anytime soon, which means we can finally stop thinking about Chan Marshall, the person, and get back to listening to Cat Power, the musician. This is something Marshall's been wishing for far longer than we have. But now that Cat Power is such a new vibrant entity, who cares about Joni Mitchell?

The notoriously glum Stephin Merritt also somehow sounds like he's having a good time these days: "Distortion's" first words, shouted over a maniacally cheerful '60s rock riff, are a desexed "Three-Way!" To Magnetic Fields fans, this will suggest a punch line is on the way, and of course it is -- more than one. "Dreams, we had a few," Merritt croons nine songs later. "But what kind of dream beats you black and blue?"

Formal constraints, such as "Distortion's" loudly touted tribute to the Jesus and Mary Chain's "Psychocandy" (which Merritt recently called "the last significant event in popular music production"), are like oxygen for the pop-addled Magnetic Fields. The artwork for the band's 1992 EP "The House of Tomorrow" bragged about its "five loop songs," meaning one melodic progression per song, period. Merritt's current side project the Gothic Archies sticks to arch children's songs, while another, the 6ths, were explicitly conceived, among other reasons, to provoke lisps (cf. 1999's "Hyacinths and Thistles"). The Future Bible Heroes, his outfit with the Magnetic Fields' Claudia Gonson, play the kind of synthy disco the Fields allude to but never indulge in.

What Stephin Merritt needs, in other words, is a way not to be Stephin Merritt. As a songwriter who rightly insists on the massive distinction between the typical coffee-houser's confessional catalog and his own long-running formal consistency, the one perspective Merritt avoids dabbling in is his own. His one regret about "69 Love Songs," he later told an interviewer, was his decision to sing "I Don't Want to Get Over You" himself: "My voice always says, 'I don't want to get over you.'" Which for him will always mean it's not worth saying at all. Nothing provokes horror in Merritt quite like seeing himself in the mirror. "Distortion's" bloodless predecessor, "i," was limited to mostly acoustic arrangements and the most self-consciously lounge-singer yowl Merritt could manage. "i" is not "I" was the point. As if anyone interested needed reminding.

As conceits go, making a record that merely sounds like "Psychocandy" is significantly less obnoxious; plus, Merritt says, most of the grinding, shimmery noise -- made up from such unlikely sources as piano feedback, Lower East Side stairwell halls, and rubber bands -- was added in postproduction, after the record had been written and recorded. "Distortion's" first real song, "California Girls" -- nervily titled and composed after the Beach Boys' song of the same name -- adds an "I hate" to the chorus, and from then on we know we're in Magnetic Fields territory, mock-screaming feedback or not.

Using such a staunchly rock trick sure makes it hard to sound sad. "Old Fools," a waltzy dirge about a fatigued pair of lovers, bursts over the speakers nigh triumphant when backed by stacks of lazily anthemic smeared chords and percussive clatter. And "Drive On, Driver" sneaks in something that wouldn't seem out of place on a Neil Young record -- a big, cruising melodic riff. Merritt gets his words in -- always the evasive heart of a Magnetic Fields record -- but his trademark irony finds a foil in the girl-group sheen of tracks like "Too Drunk to Dream," which begins typically: "Sober, life is a prison; shit-faced, it is a blessing/ Sober, nobody wants you; shit-faced, they're all undressing."

John Darnielle of the Mountain Goats used to introduce his songs in concert by saying, "As you all know, I don't write songs about myself." Neither, of course, does Merritt. But there's artistic remove, and there's self-censorship. "Distortion" works because Stephin Merritt allows himself -- however ironically -- to be Stephin Merritt again; if the production's loud enough to drown out the sound of his own voice, well then that leaves him free to use it.

Marshall, meanwhile, having finally fully discovered hers, could afford to write some original material worthy of it. Marshall and Merritt's shared and long-running fantasy -- of an insulating authorial distance, of an evocative fiction that just hints at reality and vice versa -- is impossible to maintain over so many albums and years in public. But it's the tension, and the audible effort to separate themselves from the person they play onstage, that makes these two artists, both on their eighth album and heading into their fourth decade, great. Or as "Distortion's" "The Nun's Litany" puts it, in Merritt's uniquely deniable way: "I want to be a dominatrix, which isn't like me ... But I can dream."

Zach Baron is a writer in New York.