Twenty years after we thought we'd seen the last of John Rambo, he's back and ready to take a punch. 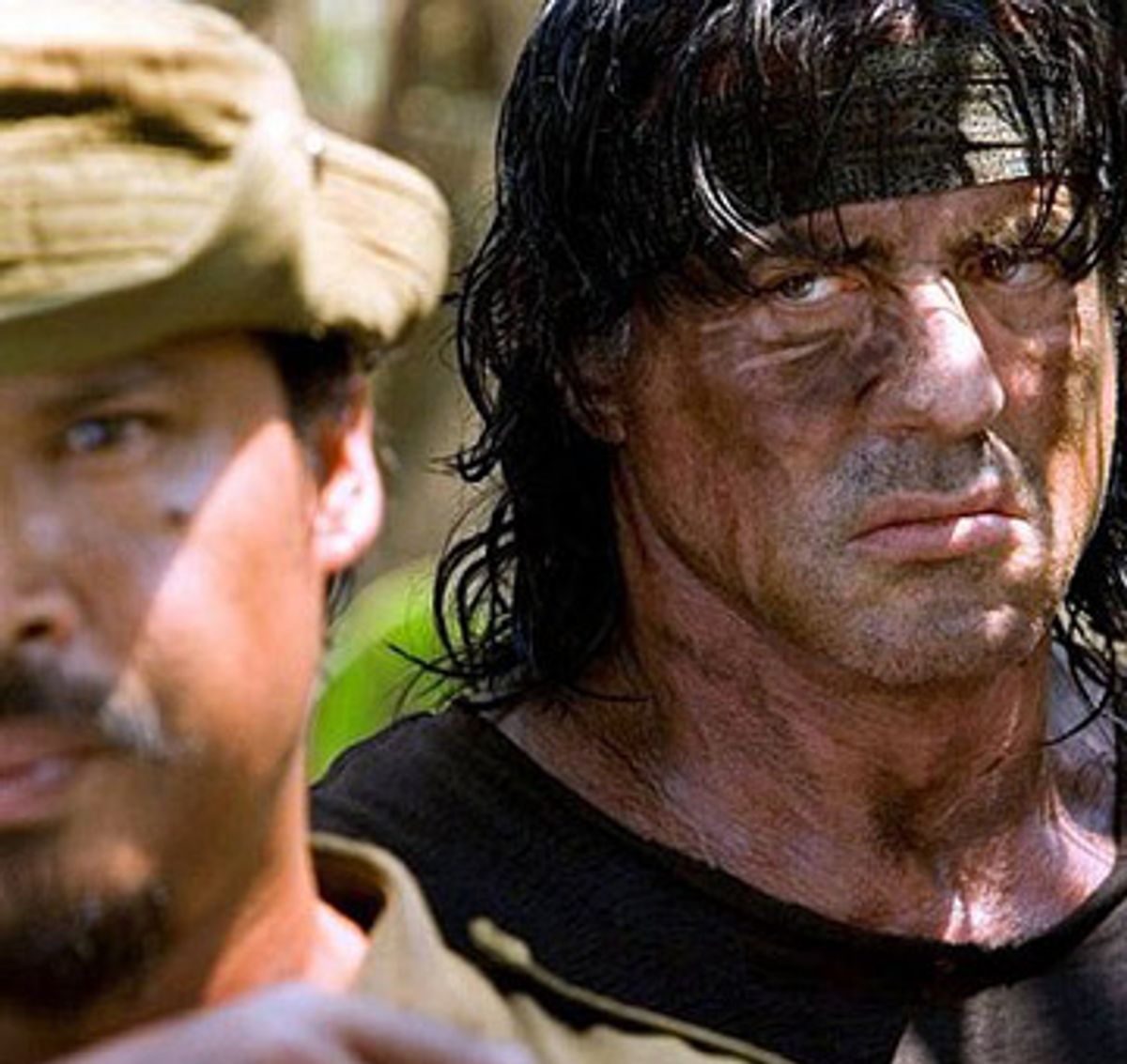 Sylvester Stallone's "Rambo," the fourth installment in the enormously popular franchise about the exploits of a damaged yet principled Vietnam vet, arrives 20 years after we thought we'd seen the last of John Rambo, and there are plenty of reasons to ask why he's showing up again. Stallone directed the movie, he stars in it, and he wrote the script (based on the character created by David Morrell).

The movie's press notes tell us that Stallone wanted to set the movie in a real-life war zone: Stallone says he called both Soldier of Fortune magazine and the United Nations -- which is one way of covering all the bases, or at least two disparate ones -- and asked, "What is the most underreported, most graphic and devastating abuse of human rights on the planet?" The answer he got was the civil war that has been raging in Burma (aka Myanmar) for more than 60 years, in which an ethnic tribe known as the Karen, fighting for its independence, has being systematically brutalized by the Burmese government.

And so Stallone's movie -- which was filmed in Thailand, close to the Thailand-Myanmar border -- is set against this brutal and dramatic backdrop. The plot, such as it is, gives us a semiretired John Rambo who has decamped to Thailand to run a modest boat service. A group of missionaries, including a personable, semi-beatific blond played by Julie Benz (of "Buffy the Vampire Slayer" and "Dexter"), ask him to transport them to Burma so they can bring aid to the troubled Karen people, and their good intentions land them in some very hot water.

"Rambo" is morally questionable for the way it uses real-life atrocities as a starting point to get a rise out of the audience: We see dramatizations of children being shot at close range, of limbs being lopped off (accompanied by the expected jets of blood), of women being humiliated and assaulted. The violence has to be very, very graphic so our hero will have every reason to get really, really pissed off. When the Burmese military descends on a peaceful Karen village, the ensuing decapitations, skewerings and skull crushings are presented with lots of fast cutting and shaky camera moves, choices that are supposed to make the events look like real life but are, in the end, nothing more than what we used to call movie magic.

Stallone doesn't intend for us to get off on the violence -- he's not that unscrupulous -- but he is co-opting these re-created horrors for his own purposes. It's clear Stallone believes he's making an action film with a conscience: These Burmese guys are so bad that there ought to be a real-life Rambo to come in and kick their asses, and Stallone has the luxury of casting himself as both martyr and savior in the semifictional world he has created.

The movie is neither cathartic nor entertaining. The action scenes (and there are many of them) feel mechanized and calculated. The script is packed with bumpy old chestnuts, like the missionary who first decries the taking of human life, only to later find himself smashing a baddie's skull with a rock.

There may be no real reason for this new "Rambo" to exist: The first "Rambo" picture, "First Blood" (1982), directed by Ted Kotcheff, was a satisfying, if somewhat crude, social-justice picture. It was followed in 1985 by "Rambo: First Blood Part II," directed by George P. Cosmatos (and, remarkably, shot by the great Jack Cardiff, the cinematographer behind two of the most wildly beautiful-looking pictures ever made, "Black Narcissus" and "The Red Shoes"). Peter MacDonald's "Rambo III" came in 1988. After that, the series' possibilities seemed to have been, thankfully, exhausted.

So why does this inarguably older, slower and heavier Stallone insist on stepping back into the "Rambo" spotlight -- aside from the fact that he must be hoping to reprise the mini-success of the 2006 "Rocky Balboa"? Only Stallone knows the real answer to that, but I will say that even in this florid, overcooked picture, Sylvester Stallone -- an aging, lumbering, Sylvester Stallone -- still manages to throw off some faint, stubby sparks. Filmgoers of taste and discernment have always had a good time bashing Stallone, but like shooting fish in that proverbial barrel, it was never a very classy pastime. Stallone, whose swollen lips and slumberland eyes have always seemed more like trademarks than actual human features, has sometimes tried to stretch past his limitations: Just as most actresses don't want to be typecast as bimbos, maybe Stallone has always harbored secret hopes of being more than just a sensitive lug, a specimen of animal brawn.

Then again, what's wrong with a little animal brawn now and then? In his younger days Stallone, now 61, looked like a figure who'd leapt off a Greek amphora, his muscles defined by a few decisive paint strokes. Today, he has the memory of that man locked inside his skin: Even in this new, unsatisfactory "Rambo," John Rambo's sense of honor and decency aren't some airy construct but more like a tricep, an actual body part you could bulk up at the gym. Is that acting or just star quality? Or is it neither? We live in a world where no one wants to age, perhaps least of all Sylvester Stallone. And maybe that's why, in 2008, he has the audacity to make another "Rambo" movie. He wants to show the world a face that can take a punch.