Not sure what to watch during the writers' strike? The giddy backstage sendup "Slings and Arrows" shoots for the sublime. 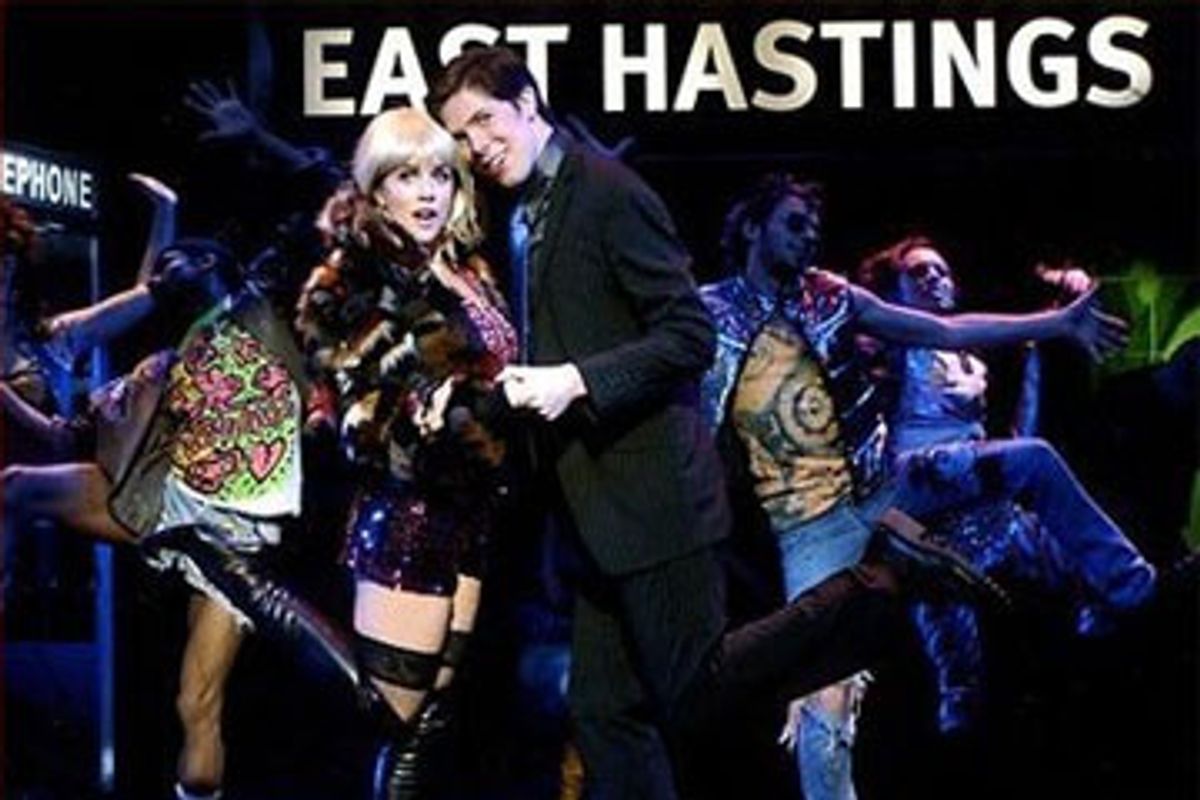 It's easy to lose your faith in the theater, if you ever had it to begin with. Theater costs so much and, nowadays, as a friend of mine once complained after blowing 75 bucks on "Dinner With Friends," it's almost always bad. But if you have ever experienced the tiniest flicker of enchantment while watching live actors perform onstage, no matter how dim that spark has grown, the Canadian television series "Slings and Arrows" can coax it back to life. Who knows? It might even succeed at winning over a few people who have never seen a play at all.

"Slings and Arrows," set in the fictional small town of New Burbage, ran for three seasons between 2003 and 2006. Each season consists of six episodes and is set during the time of the New Burbage Festival, the town's cultural (and touristic) mainstay. At the heart of each season is the production of one of Shakespeare's great tragedies -- "Hamlet," "Macbeth" and "King Lear." The tragedies mostly provide ballast for the show's comedy: a witty, sometimes giddy but always gloriously precise backstage satire that regularly takes flight into the sublime.

At the beginning of the first season, the New Burbage Festival is one of those staid, well-upholstered operations that draw a steady flow of aging subscribers but never quite manage to support themselves. "You don't make demands on the audience," an unctuous critic tells the artistic director, Oliver Welles (Stephen Ouimette). "You soothe them." Everyone involved with the theater seems at least partly checked out. We see the rich husbands of matronly donors eyeing the actresses' cleavage and making a beeline for the bar, and even the stage manager keeps one ear tuned to the hockey game during the show. At the opening night cast party, Oliver's leading lady, Ellen Fanshaw (Martha Burns), accuses him of "not caring," of merely going through the motions, just before she perfunctorily picks up a bartender half her age.

Oliver and Ellen live under the shadow of an earlier triumph, a production of "Hamlet" whose incandescent brilliance was such that people still talk about it even though it ran for only three performances. Oliver directed, Ellen played Ophelia, and the star, Geoffrey Tennent (Paul Gross), was his friend and her lover. For reasons unknown, Geoffrey suffered a breakdown during the "Alas, poor Yorick" scene, jumped into Ophelia's grave and fled the theater, ultimately doing a stint in a mental institution.

Now, seven years later, a soused Oliver passes out in the street on opening night and gets run over by a truck full of ham. ("Slings and Arrows," like the Bard himself, is not above the occasional kernel of corn.) Geoffrey turns up at Oliver's funeral, makes a speech damning New Burbage's artistic complacency and Oliver's toadying to corporate sponsors ("The whole town is a gift shop!"), and winds up getting named the interim artistic director. The next season's key production? "Hamlet," of course.

In each season of "Slings and Arrows," a rumpled Geoffrey, cuffs flapping and collar awry, wrestles with an assortment of problems that mirror the famous dilemmas of each play. The first time around, he has to muster the guts to take over from Oliver, flush the decay out of the festival and come to terms with Ellen's past betrayals. Geoffrey's terrified of "Hamlet" itself, a situation not much helped by the presence of Oliver's kibitzing ghost, who has lingered behind to help. "Apparently," the specter explains, "there's an afterlife, despite what they told us in university."

Afraid to direct the play himself, Geoffrey is forced to hire his nemesis, Darren Nichols (Don McKellar), a leather-clad compendium of phony avant-garde clichés who, despite Geoffrey's best efforts, returns at some point during every season. Darren insists on staging a "Hamlet" with live horses and flames (a perilous combination) and, zeroing in on the "rotten in Denmark" theme, instructs the supernumeraries to smell their armpits while standing in the background. In Season 2, he has the actors in "Romeo and Juliet" dressed like chessmen and forbidden to touch or even look at each other. (This, he claims, has something to do with "deconstructing the signifiers in the play.")

There's nothing terrifically innovative or edgy about "Slings and Arrows." It even abides by the old theatrical convention of pairing the leading couple (Geoffrey and Ellen) with an ingénue and juvenile among the younger actors in the New Burbage company. (In Season 1, they are Luke Kirby as the Hollywood action hero Oliver hired to play Hamlet in a bid to boost the box office and the spectacularly adorable Rachel McAdams. Sarah Polley appears as the actress playing Cordelia in Season 3.) Chances are that what the show has to say about actors -- that they are volatile, self-centered and neurotic; that they must work under conditions of excruciating vulnerability; and that at times they seem to be vessels of the divine -- are things you already know.

But, in this case, the readiness is all. The writing in "Slings and Arrows" is flawless, without excess of any kind, including that of cleverness. The direction and editing are executed with perfect timing, and all of this helps to set off the great jewels of the series -- the performances, naturally. Burns' Ellen is an impossible woman, who never entirely loses our sympathy, even as she entangles a stoic income tax auditor in the baroque mess of her personal and financial life. Ouimette hovers with a Wildean exquisiteness between ponce and genius. Gross shambles and raves and yet always provides the story with a steady moral center. Even the most fleeting of supporting roles -- a pair of poker-faced morticians, a brassy minister of culture, a self-doubting playwright -- are rich and rounded.

In counterpoint to the actors, and providing "Slings and Arrows" with its most biting satire, is the front office, run by executive director Richard Smith-Jones (Mark McKinney) and Anna Conroy (Susan Coyne) as the woman whose title no one can remember but who "does everything around here." McKinney (a member of Kids in the Hall) and Coyne are co-creators of the series, which guarantees that the agonies of "creative" never eclipse the travails of "business." Geoffrey's grapplings with his artistic demons are matched by Richard's own ethical crises and Anna's troubles with incompetent interns and stranded Bolivian flutists.

In Season 2, Richard falls under the spell of the diabolical Holly Day of Lenstrex Corp., one of the festival's chief sponsors. Employing Machiavellian office politics, gymnastic sex and Nietzschean self-help pep talks, she persuades him to turn New Burbage into a "theatrical theme park" called Shakespeareville that, despite its name, will consist largely of gift shops and Broadway musicals. (Musicals are Richard's not-so-secret passion, and in moments of high emotion, he invariably starts talking about the time he saw "A Chorus Line" at age 14.)

The best of Richard's misadventures come in Season 2, when another corporate sponsor (a water bottler who specializes in getting people to pay for what comes out of their taps for free) gives the festival a grant, insisting that it can be spent only on "rebranding." Ever impressionable, Richard winds up in thrall to one Sanjay, the head of a preposterously trendy advertising agency whose motto is "The truth is the new lie" and whose office is filled with roller skaters and kids playing video games. The resulting "shock campaign" features photos of ass cracks and dying crones with the words "Our Subscribers" stamped over them.

All this might make "Slings and Arrows" sound like a less hip version of "30 Rock." The difference is that the New Burbage Festival isn't producing "The Tracy Jordan Show," but some of the greatest works of art known to humanity. And that's a big difference. Each season, Geoffrey faces some seemingly insurmountable difficulty with his lead actor, and yet the moment finally comes when everything clicks, the camera moves in on the actor's face and what happens next makes time stand still and your heart stop in your chest. William Hutt's climactic turn as a dying curmudgeon playing Lear in the third season left me wrung out and weeping -- and even Alec Baldwin has never done that. At the end of season, Geoffrey's "Hamlet" a resounding success, the actors reel around backstage in ecstasy. McAdams flings her arms around Geoffrey and shouts, "Is there anything better than this?" Nope, not much.