Edwards bows out, but stays on message on the way

The former senator, mired in third place in the Democratic race, announced his exit but said he'd continue fighting for his causes. 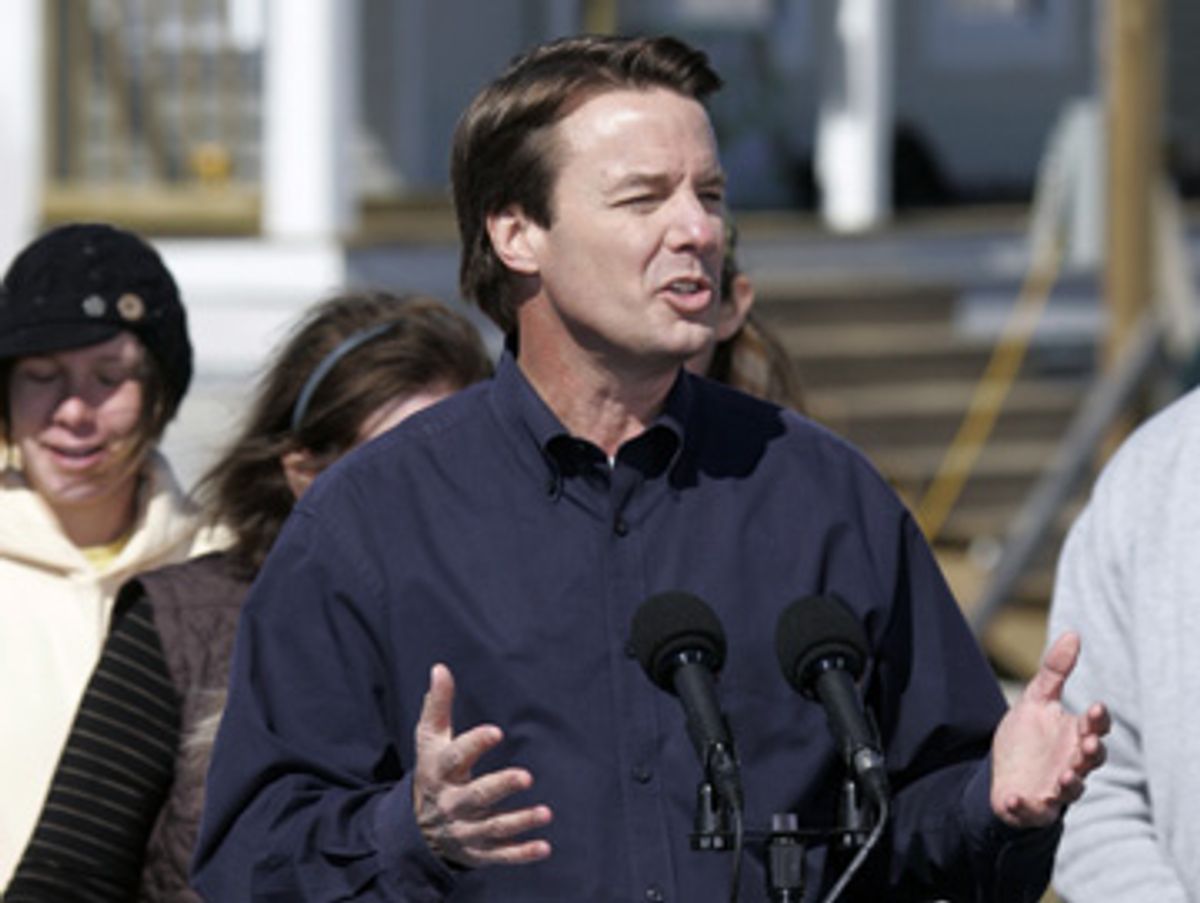 Thirteen months ago, former North Carolina Sen. John Edwards went to New Orleans to announce his second run for the presidency. Wednesday, he announced the end of his campaign from the same city.

Standing in Musicians' Village -- a development sponsored by Habitat for Humanity with Harry Connick Jr. and Branford Marsalis and intended for displaced musicians and other N.O. families -- wind blowing through the hair that became the butt of numerous jokes throughout the campaign, Edwards told those gathered that he'd be suspending his campaign, but that the causes he fought for during it would continue.

"I began my presidential campaign here to remind the country that we as citizens and as a government have a moral responsibility to each other, and what we do together matters. We must do better if we want to live up to the great promise of this country that we all love so much. It is appropriate that I come here today," Edwards said.

When it came time to deliver his next sentence, the key one, Edwards stumbled. "It's time for me to sep -- step aside so that history can, so that, so that history can blaze its path," he said, continuing, "We do not know who will take the final steps to 1600 Pennsylvania Avenue, but what we do know is that our Democratic Party will make history. We will be strong, we will be unified, and with our convictions and a little backbone we will take back the White House in November and create hope and opportunity for this country."

Edwards did not make an endorsement today, but he referred to both of his opponents -- who, according to advisor Joe Trippi, have been seeking his support -- by name, saying they'd agreed to press on for the causes that have been the focus of Edwards' campaign. "I've spoken to both Sen. Clinton and Sen. Obama. They have both pledged to me, and more importantly through me to America, that they will make ending poverty central to their campaign for the presidency. And more importantly, they have pledged to me that as president of the United States, they will make ending poverty and economic inequality central to their presidency. This is the cause of my life. And I now have their commitment to engage in this cause."

Edwards may have had trouble connecting with the voters over the past months, but his speech today was clear, the message strong. It was, perhaps, the speech he'd been missing. He spoke strongly about his commitments and about what he sees as a Democratic Party and government that have turned away from the poor and working class. "For decades, we stopped focusing on those struggles. They didn't register in political polls; they didn't get us votes and so we stopped talking about it," he said.

"I don't know how it started. I don't know when our party began to turn away from the cause of working people ... Well, in this campaign, we didn't turn our heads. We looked them square in the eye and we said, 'We see you, we hear you, and we are with you. And we will never forget you.'"

Finally, Edwards brought his campaign to an end on a similar note. "I want to say this to everyone: with Elizabeth, with my family, with my friends, with all of you and all of your support, this son of a millworker is going to be just fine. Our job now is to make certain that America will be fine ... Do not turn away from these great struggles before us. Do not give up on the causes that we have fought for. Do not walk away from what's possible. Because it's time for all of us -- all of us -- together, to make the two Americas one."