There's nothing the matter with Kansas

Barack Obama goes "home" to one of the reddest states in the nation and promises to bridge the divide between parties. 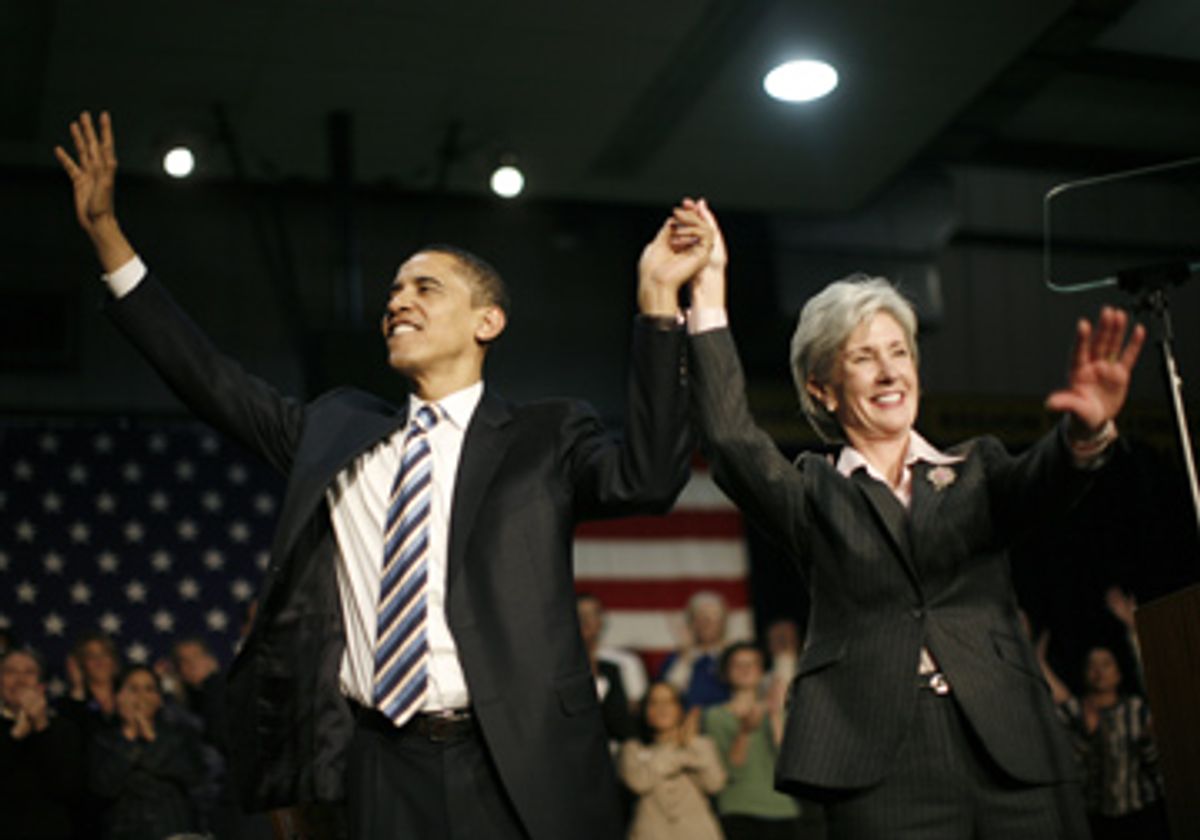 It's 10 a.m. and the snow is blowing sideways. A fast-moving cold front has knocked the temperature in El Dorado, Kan., down from 50 degrees to 30 degrees in a matter of hours. So many cars are trying to park at Butler County Community College, where Sen. Barack Obama is hosting a town hall meeting this morning, that the overflow has started to use the lot at the Star Vu Drive-In movie theater across the street.

Obama isn't scheduled to appear for another two hours, but a line stretches from the doors of the college gym 100 yards across the campus lawn. The residents of a rural white town in a bright red state have come in droves to hear a black Democrat from a big city give a speech, albeit a black Democrat with ancient ties to El Dorado.

Obama is a son of El Dorado, 30 miles east of Wichita on the Kansas prairie, despite never having set foot in the town before Tuesday. Obama was born in Hawaii, but his maternal grandfather, Stanley Dunham, grew up in here, and his grandmother Madelyn was born in nearby Augusta. Obama's mother, Ann Dunham, was born on the Army base at Fort Leavenworth, Kan., two hours to the east.

But the presidential candidate's trip to El Dorado is also a symbolic foray into what has long been enemy territory for Democrats. Obama's visit to one of the most Republican states in the Union underlines his rhetoric about inclusion -- about how the division between red and blue is artificial, and about how his own personal story, which combines black and white and Kansas and Kenya, is quintessentially American. It is also a practical political statement, a week in advance of Kansas' Super Tuesday Democratic caucus, meant to reinforce a message about electability. It says that Obama is a Democrat who can attract votes across party lines, unlike his chief rival for the nomination, but like another woman, Kathleen Sebelius, the popular Democratic governor of Kansas. Many of those in line in El Dorado have heard the rumor that her endorsement of Obama is imminent.

Inside the gym, hung with banners that proclaim "Home of the Grizzlies," spectators recognize that Obama's visit is unique, and not just for its unfamiliar aura of celebrity. "This is something this community wouldn't usually get during an election year," says Andrew Hammond, an 18-year-old African-American freshman at Butler. "We've all lived in Kansas our whole lives, so we know what the whole 'red state' thing is about. This is the first time someone from the Democrats is really trying to do something for the state of Kansas. It's about time."

Obama's speech has indeed drawn from across the aisle, as intended. A gray-haired man explains that he snagged his seat on the floor, close to the podium, because he's a Butler County commissioner. Mike Wheeler, 59, is a Republican, appointed six years ago by Kansas' previous Republican governor, Bill Graves.

"I think this guy's gonna make it," Wheeler says of Obama. Wheeler says he's tired of back-to-back Clinton-Bush presidencies, and the Republican candidates lack personality. "It's just that some candidates have that charisma."

At 1 o'clock, the packed gym begins to get restless, clapping to the canned beat of Kool and the Gang's "Celebration." At long last, a woman named Rebecca Bidwell takes the stage. She says she was born and raised in El Dorado, and that she and her son, an Army sergeant first class, were initially drawn to Obama because of his early opposition to the war in Iraq. "[My son] would be here today, but he is one of the many being treated for post-traumatic stress disorder," Bidwell explains. Now, Bidwell says, her 19-year-old grandson is "over there."

"Here in Kansas, we're excited that we have a chance to see principles return to politics," Bidwell says, before relinquishing the podium to "our next president of the United States..." Her last two words are drowned out by cheers.

Sure enough, Obama's pitch is about bridging the divide, as he segues into the story of his grandparents' local origins, and his own roots. "You know, we have been told for many years that we are becoming more divided as a nation. We have been made to believe that differences of race and region, wealth and gender, party and religion, have separated us into warring factions, into red states and blue states ... But it is a vision of America that I am running for president to fundamentally reject -- not because of blind optimism, but because of a story I've lived. It's a story that began here, in El Dorado."

"That's why I can stand here and talk about how this country is more than a collection of red states and blue states -- because my story could only happen in the United States."

The speech, which then ranges over topics from the economy to education to Iraq, gets many standing ovations from the crowd, but a curiously mixed reaction from Mike Furches. A burly ponytailed 48-year-old in a leather coat decorated with American flags, Furches listens intently, holding a small silver recorder. During some of the standing ovations, like the one when Obama says it's time to bring the troops home, he remains in his seat. When Obama says he dreams that Americans can retire with dignity and afford to send their children to college, Furches stands up.

When Obama says he'd like to repeal Bush's tax cuts "for those who don't need 'em," Furches stays down.

When Obama promises to pass healthcare reform "before my first term is up," Furches stands.

Furches, it turns out, is one of those voters whom Obama is allegedly luring across the divide. He changed his political registration from Republican to Democrat just last week in order to caucus for Obama. He's recording Obama's speech to air on his Internet radio show, called "Virtual Pew." A Christian, he became a hardcore Republican during the Clinton years and says that he'll vote for Mike Huckabee if Huckabee secures the Republican nomination. If it's anyone else, he's voting for Obama. His son, 18-year-old Nathan, sitting next to him in a white hoodie, is going to vote for Obama when he casts his first vote ever.

On some things, like the war in Iraq, Furches disagrees with Obama. He says he talks to soldiers in Iraq for his radio show and hears from them firsthand that the surge is working. "That's my main disagreement, but I support Obama with the realization that he can't influence change without the cooperation of the rest of Congress."

On other issues, Furches has found his candidate. "A lot of Christians focus on abortion and prayer," Furches says. "They forget the general need of service to the poor. Obama has been outspoken about helping the poor, and I think he offers a good plan. I think the Republicans have used the religious community as a pawn."

After 45 minutes of speaking, Obama signals the end of his time, but then introduces "a special guest." Gov. Sebelius takes the stage resplendent in a pink blouse and a sparkly brooch.

Sebelius is funny, engaging, and 10 times more animated than she was on national television the night before delivering the Democratic response to President Bush's State of the Union address. She wastes no time offering her endorsement to Obama.

"I think, right now, we are with the next president of the United States," Sebelius says. Obama, sitting on a stool onstage, takes his finger away from his lips to smile gratefully.