When the GOP catches a cold, everybody at Fox News is ailing. No wonder its ratings are in the pits. 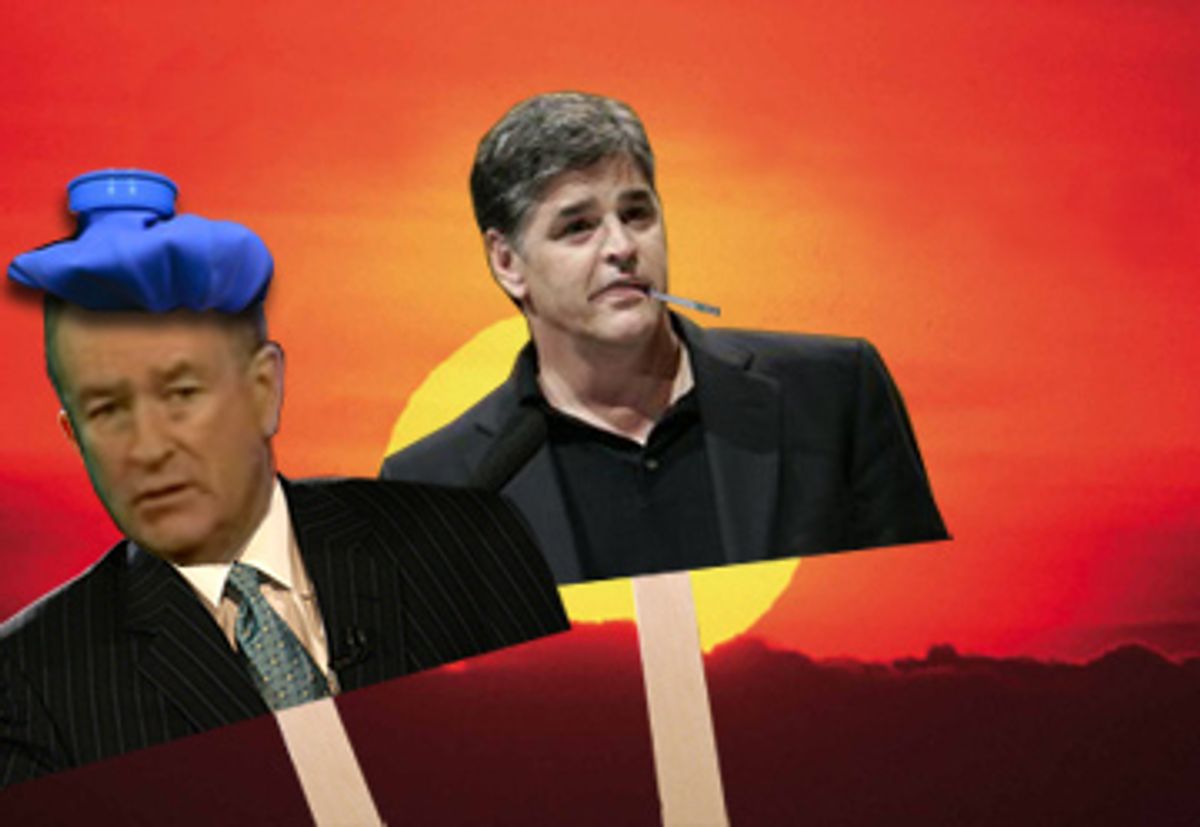 My guess is that Fox News guru Roger Ailes has been reaching for the Tums more often than usual early in the New Year, and there are lots of reasons for the hovering angst.

A) CNN's resurgence as the go-to cable destination for election coverage.
B) The unmistakably sunken candidacy of Fox News' favored son, Rudy Giuliani.
C) The still-standing candidacy of Fox News nemesis and well-funded antiwar GOP candidate Rep. Ron Paul.
D) The Democratic candidates' blanket refusal to debate on Fox News during the primary season.
E) Host Bill O'Reilly being so desperate for an interview from a Democratic contender that he had to schlep all the way to New Hampshire, where he shoved an aide to Sen. Barack Obama and then had to be calmed down by Secret Service agents.
F) Former Fox News architect and Ailes confidant Dan Cooper posting chapters from his wildly unflattering tell-all book about his old boss. ("The best thing that ever happened to Roger Ailes was 9/11.")
G) The fledgling Fox Business Network, whose anemic ratings are in danger of being surpassed by some large city public access channels.
H) Host John Gibson's recent heartless attacks on Heath Ledger, just hours after the young actor was found dead.
I) Fox News reporter Major Garrett botching his "exclusive" that Paul Begala and James Carville were going to join Sen. Hillary Rodham Clinton's presidential campaign, and then refusing to correct the record.

Bottom line is that Fox News is in for a very rough 2008. And the umbrella reason for that is quite simple: Eight years ago the all-news cable channel went all-in on the presidency of George W. Bush and became a broadcast partner with the White House. Proof of that was on display Sunday night, Jan. 27, during Fox News' prime-time "Fighting to the Finish," a "historic documentary" on the final year of Bush's presidency. Filmed in HD and featuring "unprecedented access," according to the Fox News press release, the show was pure propaganda. (I must have missed Fox News' "Fighting to the Finish" special back in 2000, chronicling the conclusion of President Bill Clinton's second term and his "extraordinarily consequential tenure.")

Meaning, when the GOP catches a cold, everybody at Fox News gets sick. As blogger Logan Murphy put it at Crooks and Liars, "Watching FOX News getting their comeuppance has been fun to watch. They made their bed, now they're having to lie in it and it's not too comfortable."

The most obvious signs of Fox News' downturn have been the cable ratings for the big primary and caucus votes this year, as well as the high-profile debates. With this election season generating unprecedented voter and viewer interest, Fox News' rating bumps to date have remained underwhelming, to say the least.

For instance, on the night of the big New Hampshire primary, CNN, which habitually trails behind Fox News in the prime-time race, attracted nearly 250,000 more viewers than its top competitor, marking a changing-of-the-guard of sorts.

The turnaround was striking when you consider that in 2004, even with no Republicans running against Bush, Fox News was still able to draw 200,000 more viewers than CNN on the night of the New Hampshire Democratic primary. Yet in 2008, with a very competitive GOP field, CNN was the ratings winner from New Hampshire.

And just look at the ratings for Jan. 19, which featured returns from the Nevada caucus coming in during the late afternoon, and then fresh returns from the South Carolina Republican primary being posted during prime time that night. In the past, Fox News would have absolutely owned that night of coverage, as conservative news junkies flocked to their home team -- Fox News -- to see the results. But no more. CNN grabbed nearly as many prime-time viewers for the Republican South Carolina returns as did Fox News.

The problem for Fox News is that it's the Democratic race that's creating most of the excitement, yet Fox News has been forced to mostly watch the race from the sidelines. That's because last winter, after the network tried to smear Obama for purportedly attending a radical Muslim school as a child, liberal bloggers launched an initiative to get Democratic candidates to boycott a debate co-sponsored by Fox News and the Nevada Democratic Party. (The boycott, powered by Foxattacks.com, was later extended to any and all Fox News debates.)

The point of the online crusade was not simply to embarrass Fox News or rattle Nevada Democrats for being out of touch with the grass-roots masses that distrusted and despised Fox News. The point, instead, was to begin chipping away, in a serious, consistent method, at Fox News' reputation. To spell out that Fox News was nothing more than a Republican mouthpiece and that Democrats need not engage with the News Corp. giant.

The lack of Democratic debates for Fox News has meant a huge setback for the news organization from a ratings perspective. Just look at the grand slam CNN hit last week when, on Jan. 21, it broadcast the much-talked-about Democratic debate from South Carolina. The CNN event not only creamed Fox News in the ratings, nearly tripling its audience that night, but the debate set a new cable news mark for the most viewers ever to watch a primary debate.

CNN is virtually guaranteed another monster ratings win this week with the pair of high-profile debates staged in California -- the Republicans on Wednesday night and Democrats on Thursday. No wonder CNN's so giddy these days. Here's the spin CNN president Jonathan Klein put out following its New Hampshire ratings win: "There's a freshness and exuberance to our coverage that the others just aren't matching ... Fox almost seems downright despondent in their coverage."

So I'm not the only one who feels like Fox News coverage, especially of the Republican field, often feels like a televised wake. Or maybe that's just been Fox News' collective, subconscious mourning of the Giuliani campaign. After all, Sean Hannity serves as Fox News' official ambassador to the Giuliani campaign, a campaign that Ailes and Fox News were hoping to ride back into the White House. Yet despite showering Giuliani with all kinds of laudatory coverage, both Hannity and Ailes have been powerless, as they've watched Giuliani's rudderless campaign go nowhere. Even an all-out Fox News marketing blitz to label Giuliani "America's Mayor" never got traction. In fact, it ranked right up there with the launch of New Coke in terms of branding success. Watch this clip to see the absurdity in all its ad-nauseam glory.

In the meantime, the rise of Sen. John McCain and especially Mike Huckabee, with his populist streak, has caused all sorts of consternation at Fox News. Even the conservative Weekly Standard took notice. The magazine recently wrote that "A lot of conservatives have problems with both Huckabee and McCain. Last night on Fox, for example, Sean Hannity could barely conceal his distaste for both pols."

And don't even mention Ron Paul's name to the folks at Fox News, who have stepped outside their role as journalists to try to kneecap the antiwar GOP candidate. The most blatant slap came right before the New Hampshire primary, when Fox refused to include Paul in a televised GOP debate, despite the fact that just days earlier Paul grabbed 10 percent of the vote in the Iowa caucus -- nearly double Giuliani's tally.

Paul's Republican supporters became so incensed by the snub that they literally chased Sean Hannity through the New Hampshire night chanting "Fox News sucks!" and captured the scene in a homemade clip that really has to be seen to be believed. (To recap New Hampshire for Fox News: Hannity was pursued by a Republican mob, O'Reilly got into a shoving match with an Obama aide, and CNN grabbed more viewers. Now that's a week to remember!)

Oh, and we can't forget the wildly hyped launch of the Fox Business Network, which, News Corp. execs bragged, would dethrone longtime cable business news champ CNBC. Of course, that might happen one day. But the early ratings for Fox Business Network have been unbelievably weak.

After two months on the air, Fox Business Network, available in 30 million homes, was attracting, on average, just 6,300 viewers on any given weekday, according to Nielsen Media Research. That was good for a nearly invisible .05 rating. (By comparison, CNBC during that period was attracting 265,000 viewers.) Making matters worse for Ailes was the fact that on Jan. 22, as fears mounted about a possible global financial crisis, CNBC posted its best ratings in seven years, attracting 401,000 viewers that day.

The hurdle for Fox Business Network has always been simple: Why would investors and day traders in search of reliable business information turn from CNBC over to the Fox brand, which is so well known for passing along one-sided information? News Corp. always assumed Fox News would help launch the business channel. But Fox News is taken seriously by so few people, it may be hurting the business launch.

After all, Fox News continues to embarrass itself with a type of journalism that nobody else in the industry would dare call professional. And for proof of that look no further than Major Garrett, who is supposed to be one of the channel's nonpartisan, serious journalists. He landed a recent scoop about how former advisers to Bill Clinton, Paul Begala and James Carville, were getting set to join Hillary Clinton's campaign.

Carville immediately shot the story down, telling Talking Points Memo's Greg Sargent that very same day, "Fox was, is and will continue to be an asinine and ignorant network. I have not spoken to anyone in the Clinton campaign about this. I'm not getting back into domestic political consulting."

Begala did Carville one better and directly e-mailed Garrett to deny the story -- a story Garrett never bothered trying to check with Begala or Carville before it was broadcast. Garrett's response to Begala's blanket denial? Garrett told the Democratic operative that he would take his denial "under advisement." [Emphasis added.]

Garrett then went back on the air and repeated the same story, and added the fact that Begala had been on a conference call the day before with Clinton advisors, which was also false. And no, despite his earlier e-mail exchange with Begala, Garrett never bothered to try to confirm the conference call story with him before reporting it on Fox News.

Recounting the whole Kafka-esque charade at the Huffington Post, Begala wrote, "I've never had a more surrealistic day. If this is what one of Fox's best and most respected reporters is doing, what are the hacks up to?"

This article was first published at Media Matters for America.