The battle of the literary endorsements

Maya Angelou and Toni Morrison have both gone public with their presidential picks. What do their overwrought odes tell us about the candidates they favor? 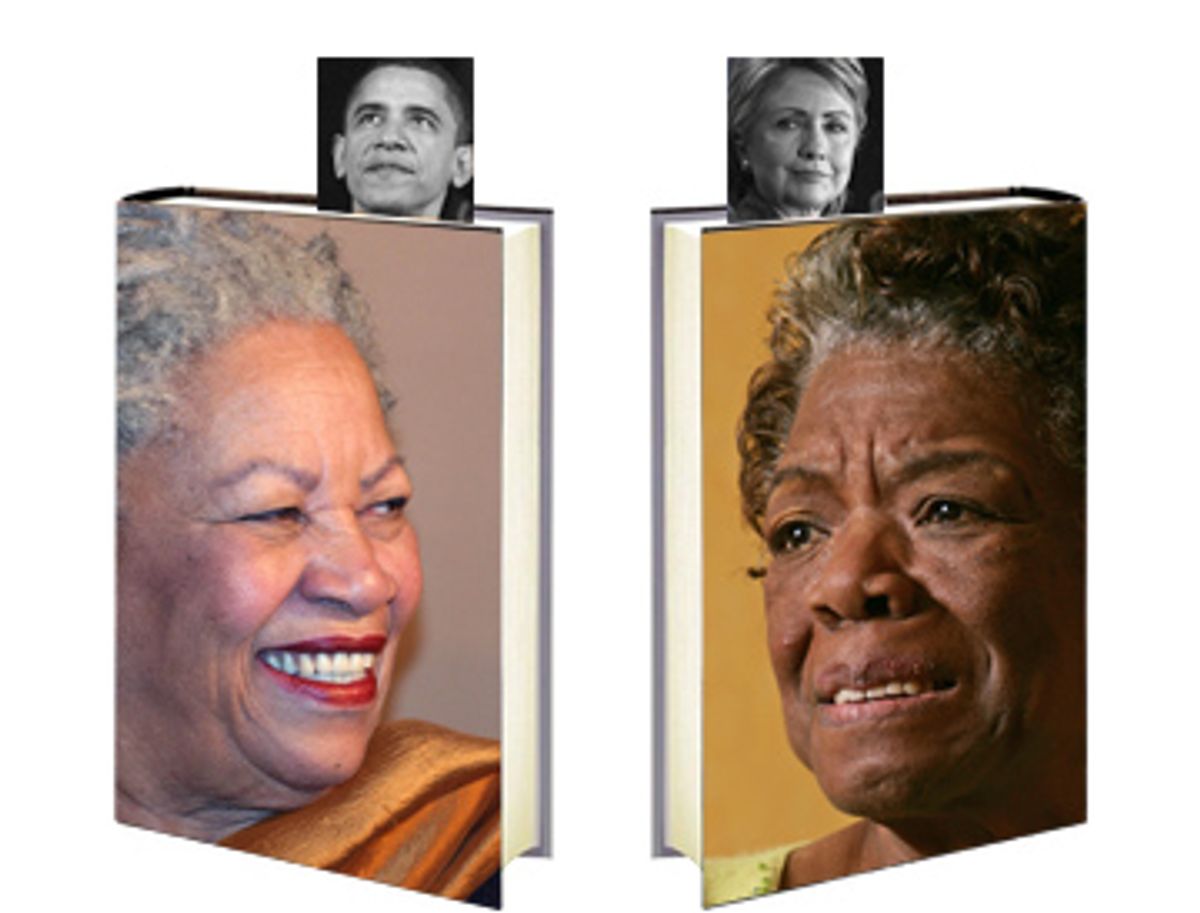 Every campaign has its theme song, and now, apparently, every Democratic candidate must also have his or her own dowager African-American literary icon. Last week, poet, memoirist and greeting card scribe Maya Angelou -- who read "On the Pulse of the Morning," a poem she wrote in honor of the occasion, at the 1993 inauguration of Bill Clinton -- has just published a poem paying tribute to Hillary Clinton. This week, novelist and Nobel laureate Toni Morrison sent a public letter of endorsement to Clinton's main rival, Barack Obama.

What do the two specimens say about the candidates they praise? Angelou wrote her poem, the curiously titled "State Package for Hillary Clinton," when asked for her thoughts on the Clinton candidacy by British newspaper the Observer (which explains why it was published in England, despite the fact that it is apparently addressed to the lily-livered American electorate). Most likely it was dashed off, amid the fug of complacency you'd expect to find lingering around a writer who has already been voted one of the 10 most admired women in America. "State Package for Hillary Clinton" certainly has neither of the traits commonly associated with poetry -- original language or evocative metaphor.

Angelou begins, inauspiciously, by likening Clinton to "dust," on the theory that those who "tread" her "in the very dirt" (as distinguished -- it's not clear how -- from the less exalted "dust") will nevertheless see her "rise," despite the treading. Admittedly, the metaphor has some legitimacy -- don't Clinton's poll numbers go up every time the world seems to be stomping on her? -- but what politician would appreciate being compared to a plague upon unpaved roadways, to clouds that obscure the way forward? Besides, dust no sooner rises than it begins to fall.

The rest of the "poem" (Britain's poet laureate, Andrew Motion, diplomatically equated it with a "poster") consists of a pro forma invocation of strong womanhood followed by a string of campaign-trail clichés: "She is in this race for the long haul. She intends to make a difference in our country. Hillary Clinton intends to help our country to be what it can become." Possibly Angelou means this pablum as a crypto-postmodern witticism, in which Clinton's implied promise to deliver a known quantity to the White House is mirrored by slogans so standardized they seem to have been extruded from the machines that make the plastic toys for McDonald's Happy Meals. But what do you think are the odds against that?

Morrison's endorsement, coming in the form of a letter, is naturally addressed to Obama himself. Unlike Angelou (an old hand at political puffery) Morrison has launched herself into uncharted waters; this, she remarks, is her first public endorsement of a presidential candidate. Morrison is, of course, a much more accomplished writer than Angelou, if in her own way equally susceptible to overplaying the grande dame role.

Angelou has come to specialize in churning out inspirational and affirming mottos, suitable for taping on the bathroom mirrors of the self-esteem impaired. Morrison, as a public figure, excels at gliding regally onto the scene and bestowing an air of high-mindedness on the proceedings. She can be a very fine novelist, but at its weakest, her fiction subscribes to that woolly school of American literary prose that takes William Faulkner as its patron saint. You can sometimes lose track of what she's saying while you're being impressed with how sumptuously she's saying it.

Morrison lauds Obama for his "creative imagination which coupled with brilliance equals wisdom," then goes on to observe that "it is too bad if we associate it only with gray hair and old age. Or if we call searing vision naiveté. Or if we believe cunning is insight. Or if we settle for finessing cures tailored for each ravaged tree in the forest while ignoring the poisonous landscape that feeds and surrounds it." This is a classic Morrisonian metaphorical progression. It sounds great -- sonorous and rich with lofty concepts and moral authority. Each sentence technically makes sense. Yet somehow, by the time you get to the end, things have gotten out of focus. What exactly is she talking about? In fiction, where evocation and allusion can be viable tools, you might just go with the mood and move on; political argument (ideally) demands a bit more clarity.

The two writers do match their chosen candidates, then. Angelou, with a well-known and colorful life story featuring odds overcome and the triumph of the human spirit, has been embraced as an icon of middlebrow empowerment. With her, you know exactly what you're getting because you've gotten it so many times before, and yet you can congratulate yourself for (mildly) bucking the system. Electing Clinton would make history, but it also promises to bring a familiar presence back to the White House.

Morrison, as the only living Nobel laureate in literature in a fundamentally unbookish nation, is a homegrown exotic, the embodiment of the American notion that if you can't quite understand it, it must be literature. She is an overwhelming presence, handsome and stately, with a magnificent voice. Like Obama, with his Harvard degree and pristine, international sleekness, she seems too good and too smart for us, the sort of American appreciated by foreigners with obscurely discriminating standards. The electorate famously prefers guys they can imagine dropping by for a barbecue over intimidating intellectuals, but that insecurity has been biting us in the ass for the past eight years.

Now might be the moment we opt for dutiful self-improvement, like the one month, among a year's worth of easy-reading book-club picks, when Oprah reaches for the top shelf and pulls down Faulkner or Tolstoy. Bookstore sales figures show that her viewers follow her example far enough to buy those daunting classics. But no one knows how many of them read all the way to the end.