This blade slices, it dices

Top chefs adore them, Rachael Ray sells them, so what's the big fuss about Japanese knives? 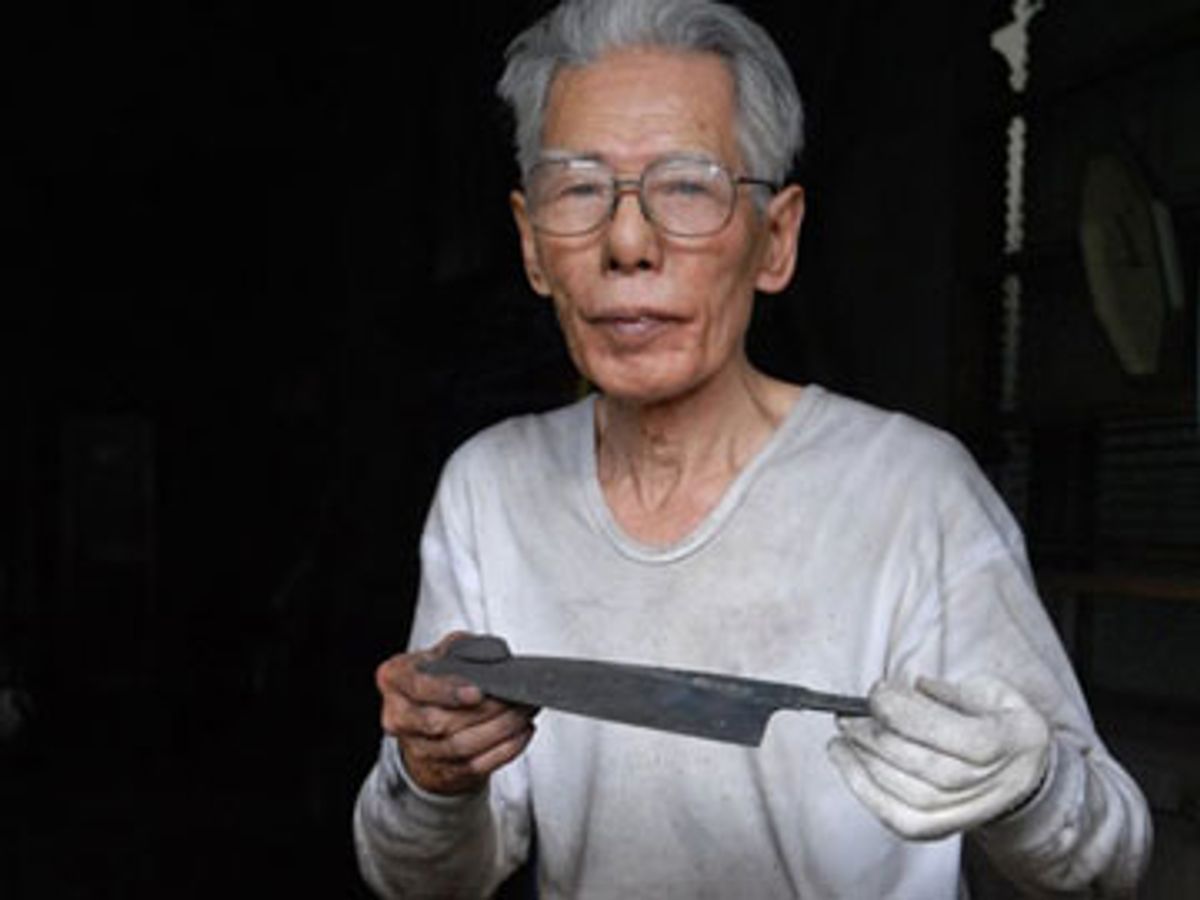 In the Quentin Tarantino movie "Kill Bill," Uma Thurman flies to Okinawa on a fateful mission: to find the greatest samurai blade ever forged. There she meets a white-robed master blacksmith who hands her a gleaming katana and solemnly intones, "I can tell you, with no ego, this is my finest sword."

Like Uma, I went on a quest for "Japanese steel." But my intentions were less homicidal: I needed it to chop shiitake, fillet tuna and julienne carrots. I'm a reporter by trade but am fascinated by Japanese food -- so much so that I volunteer a couple nights a week in the kitchen of a Japanese restaurant. The knives of the cooks all say the same thing: "Made in Japan."

And not just those of the cooks. Since the mid-'90s, Japanese knives have become de rigueur in professional kitchens of all stripes -- edging out, so to speak, German and French blades. As top chefs like Thomas Keller, Charlie Trotter and Jean-Georges Vongerichten discovered Japanese knives, home cooks began to follow, and in the last five years sales have exploded. Even the enterprising Rachael Ray now hawks an "East/West" blade based on Japanese design.

"They're perfectly engineered," said legendary four-star chef David Bouley. As he pulled out blade after Japanese blade -- he owns 50 -- he explained that these knives cut through the cells of ingredients so cleanly and precisely that food oxidizes more slowly, and tastes better as a result.

When I asked chef Eric Ripert, of New York's hallowed Le Bernardin, he got philosophical about his Japanese blades (all 25 of them): "When you own a Japanese knife, you show your commitment and passion for cooking," he said. "You're showing the other guys you're serious about what you do."

My own chef put it simply: "Get yourself some Japanese knives, man."

I decided to travel, à la Uma, to the source: a gritty industrial city called Sakai, 350 miles southwest of Tokyo. This old port has been the capital of samurai sword and knife manufacturing in Japan since the 1300s. A small band of artisans here still work in the traditional way, handcrafting blades in tiny workshops tucked between bland apartment buildings and factories.

A knife wholesaler named Junro Aoki offered to guide me, and we drove to a prefab warehouse that doubled as a smithy. Inside the soot-covered, dimly lit space a blacksmith stood in a cramped 2-foot-deep pit, face-to-flame with a coal-fueled forge breathing 1,400 degrees of blistering heat. He was 5 feet tall and wire thin, wearing a grimy turtleneck tucked into grey slacks, a denim shop apron and wooden flip-flops with purple socks. Prescription glasses framed his eyes. A cotton glove covered his right hand. That was it for protective gear. The fire from the forge cast an orange glow on his long face.

He didn't look up at us. With a pair of steel tongs, he shifted a white-hot steel bar from the forge to an anvil and began smacking it with a hammer. His head bobbed as he whacked the fiery metal only a couple of feet from his face. Sparks kicked up at him, but he didn't flinch. A knife -- a fish-slicing yanagi -- began to take shape from the bar. He tossed it on the dirt floor to cool.

Only then did he hop out of the pit to greet us. Up close I could see his clothes were peppered with tiny burn holes from the sparks. His name is Keijiro Doi. He's 80 years old and has been blacksmithing for six decades. He forges more than 100 different kinds of knives, shaping them by intuition and feel. "The fire and steel are both alive to me," he explained. His work is part craft, part art -- part sorcery. I asked him how he knows when a blade is ready.

By the time he finishes a knife, Doi has pounded it from a half-inch-thick steel bar down to a fifth-of-an-inch hardened carbon steel blade. He and his 52-year-old son, who helps him, finish about a dozen a day. The blades are dull gray in color, with no edge yet. The thin steel is incredibly strong. I tried to bend one I found in a junk pile. No dice.

This metal is key to understanding Japanese knives. Steel, of course, is an alloy of iron and carbon and other elements. Hardened steel -- the stuff of knives -- comes from heating, cooling and pounding steel until you crush together its molecules. Japanese carbon steel derives from techniques originally developed to produce steel for samurai swords. Its exceptional hardness lets you hone an incredibly sharp edge on the blade.

Shape is also critical. Japanese knives come in two broad styles: Western and traditional. Western looks like the double-edged knives we know. A gyutou is what we'd call a classic chef's knife -- this is the one American chefs typically buy. Traditional Japanese kitchen knives, on the other hand, come in three main shapes: yanagi, usuba and deba. The yanagi, which looks like a long willow leaf, is for slicing raw fish. The usuba has a wide rectangular blade for cutting vegetables. The deba is a heavy blade like a thick chef's knife, for portioning fish and chicken.

The Japanese endlessly riff on these three shapes. The local knife museum displays more than 160 different styles of knives, specialized blades to cut sea eel, freshwater eel (four distinct styles from four cities), whale, horse mackerel, the head of the bonito fish, Chinese cabbage, watermelon, silkworm, rolled sushi, soba noodles and 800-pound tunas -- this last one an astonishing 6-foot-long maguro kiri that looks like a sword. On top of this, the knives come in different sizes and combinations of steel. The museum alone sells 18 kinds of deba.

Traditional Japanese knives typically have one side sharpened, the other not, which lets you make precise, parchment-thin cuts.

In Sakai City, I was after that old-time religion: traditional Japanese knives, still hand-forged from carbon steel by master blacksmiths like Mr. Doi. (Western-style knives, on the other hand, are typically machine-stamped from a variety of alloys.) Once ready, the wholesaler walks the blades over to a sharpener's workshop. I never realized sharpening was such a fine art, but here "master sharpeners" are revered craftsmen.

The wholesaler introduced me to Yukinora Oda, another 5-footer north of 70. He's been sharpening knives for more than half a century. A stocky, gruff man with a green beret framing his fleshy face, he wore a tattered sweater vest over a sweatshirt and shuffled around in an ancient pair of bedroom slippers. A Mild Seven drooped from his mouth with an impossibly long ash.

The sharpener stood on a crate hunched over a stone grinding wheel 4 feet in diameter and a half a foot wide, a wheel that screamed like an airplane engine as it turned. Securing the blade in a wooden holder, he pressed it against the whirling stone, sliding it from side to side, his face 18 inches off the surface. He guided the screeching blade by feel -- he couldn't actually see it. Long sparks shot forward as he worked. The cigarette hung from his lips.

Sharpening and finishing a knife is a 25-step process, he explained. In the final step, the sharpener knelt on a worn cushion and stroked a knife along a fine grit sharpening stone. He pulled a finished yanagi from a bucket of neon green anti-rust liquid. The transformation from raw blade was remarkable: The handcrafted knife was perfectly engineered, polished and scalpel sharp. A thing of beauty.

At the wholesaler's office, another one of Sakai's Sunshine Boys, an engraver in his 70s -- also 5 feet tall -- arrived to freehand chisel Japanese calligraphy on the surface of the blade. Mr. Aoki tapped a hand-turned magnolia-wood handle onto it and wrapped it carefully. The knife was ready. "Hojo toiro," he said, satisfied -- an old expression meaning that each knife has a unique personality because it was fashioned by hand.

That evening Mr. Aoki invited me to dinner at a restaurant specializing in fugu, or blowfish. If there's anything that puts a chef -- and his blades -- to the ultimate test, it's this Japanese delicacy. Fugu's internal organs have lethal levels of tetrodotoxin -- a poison with no known antidote. How you cut this fish makes all the difference between a repeat customer and a dead one. Chefs need a special license to prepare it.

As we sat on a tatami mat before a low table, the chef delivered a platter of raw fugu so fresh the flesh was still twitching. We poached them in boiling fish stock and sipped hot sake infused with roasted fugu fins. Tetrodotoxin or not, it tasted great. The chef was a fit 42-year-old with a buzz cut, proud of his fugu-making skills -- and his knives.

"Yeah, I've spent a lot of money on knives," he said, laughing as he walked into his kitchen, an open space before a long dining counter. He pulled out blades from drawers and boxes. A half-dozen more were stuck into two old Yellow Pages taped together and sitting on a shelf above his head.

The chef soon laid 20 knives on the counter. Each had a specific purpose: Three were just for slicing fugu into sashimi. How sharp were they? He grabbed one of the slicers and split in half a piece of fugu skin -- thinner than cardboard -- lengthwise.

As I watched the chef work, it seemed his knives didn't so much cut ingredients as float through them. "The knife becomes an extension of my hand," he explained. He rested his index finger on a blade's spine and guided it almost effortlessly.

The chef sharpens and polishes his knives every day (carbon steel rusts if you're not careful). He pointed to a new deba -- the heavy fish chopper -- and one a decade old. The older blade had shrunk by a third from repeated honing.

"Our knives are like our swords," the chef said, invoking the devotion the samurai had to their weapon. He wiped his slicer with a towel, reached up and jammed it back into the tattered phone books. It was time to get some Japanese knives, man.