"Over Her Dead Body"

Is this the worst romantic comedy ... ever? 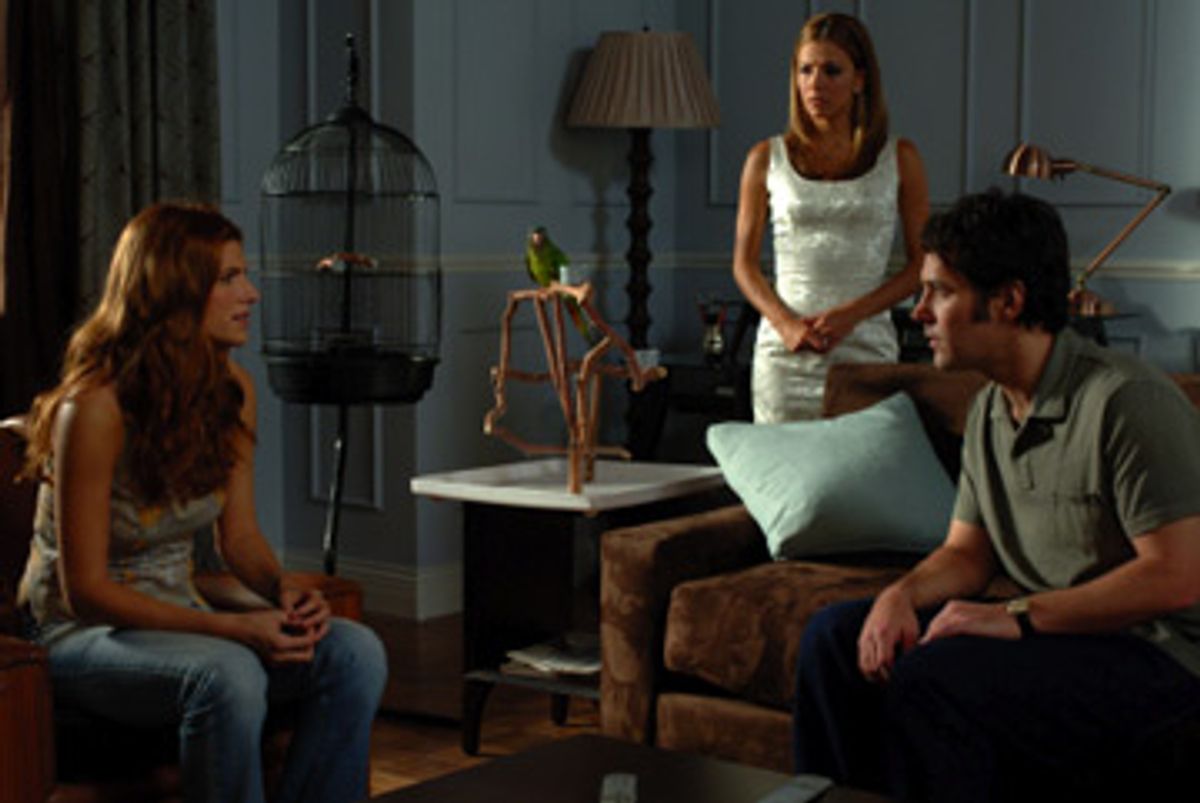 "Over Her Dead Body" may be the worst romantic comedy I've ever seen, although I hesitate to make such a resolute pronouncement about a movie that's so barely even there. Paul Rudd is Henry, a low-key, good-natured veterinarian -- in the movies, there's no such thing as a high-strung, asshole veterinarian -- whose intensely manicured, control-freak fiancée, Kate (Eva Longoria Parker), dies in a freak accident on the morning of their wedding day: She's crushed to death by an angel-shaped ice sculpture.

Henry is bereft (or so we're told -- this is a movie that does lots of telling and little showing), so his sister, Chloe (Lindsay Sloane), introduces him to a lithe, redheaded, slightly dippy psychic-slash-caterer named Ashley (Lake Bell). Chloe hopes Ashley will be able to channel Kate's spirit, thus helping Henry realize that Kate wants him to get on with his life. The only problem is, Kate's spirit wants Henry all to herself: When she realizes that Ashley and Henry are getting along a little too well, she shows up at Ashley's apartment (the psychic is, conveniently, the only person who can see her) and tries to sabotage the budding romance by making her life a living hell, or at least some sort of catfight purgatory.

If that all sounds a little like "Topper," trust me -- it isn't. When "Over Her Dead Body," written and directed by Jeff Lowell (writer of "John Tucker Must Die"), isn't listless and unshaped, it's aggressively distasteful. The rivalry between these two women, one of them living and one of them merely undead, is played for laughs, but the gags just play off the worst, most exaggerated aspects of woman-to-woman behavior. At one point Kate, who has the ability to spy on Ashley in the most intimate settings (the shower, for instance), urges her to lay off the pasta. "You're getting a little hippy," she says in a cutting whisper. Ashley, after reckoning with the fact that a ghost has actually communicated with her, strikes back: The two engage in a battle of wits that's really just a catalog of all the petty jealousies and resentments women harbor when they're fighting over a guy. They may as well just scratch each other's eyes out.

I suppose Rudd's Henry is a man worth fighting for, but it's hard to tell. Rudd is a charming comic actor who ought to be playing more romantic leads -- just not in movies like this one. Lowell hasn't bothered to write any good lines for him, and he shambles through the picture, looking lost. He's a ghost in his own movie.

Then again, the two women make even less of an impression. Longoria Parker, of "Desperate Housewives" and "The Sentinel," is allegedly one of those real stunners that no man can help drooling over. She definitely has that smoothed-out, no-age look -- she could be 25, she could be 45 (in fact, she's in her early 30s) -- which would be perfectly OK if her face had any character to begin with. As it is, there's a disconcerting, unblinking blankness to it. Bell's Ashley has a bit more verve: She at least resembles a real person more than a doll. But she's not playing a character so much as a type, which may be more the script's (and the director's) fault than it is hers.

Lowell falls down on giving us the most basic pleasures of a romantic comedy: We never know why any of these characters would be attracted to each other, and when there is an attraction, we never see any sparks. Who knows what a sweet, laid-back guy like Henry would see in a possessive, spiteful person like Kate to begin with? In the movie's opening scene, during which Kate is, ostensibly, still alive, the generalissima bride-to-be toddles around in a sheath dress and wobbly shoes. She barks at caterers, blinking her meticulously mascaraed eyes in a barely controlled Morse code of superiority and privilege. That ice sculpture can't come toppling down soon enough.

I laughed exactly once during "Over Her Dead Body," at a prolonged fart gag -- and even then, it was probably the priceless, "Who, me?" look on Rudd's face that really got me. But you know a movie is in trouble when a single fart gag is the best thing about it. It's great when a romantic comedy makes you feel lighter than air. "Over Her Dead Body" just blows.