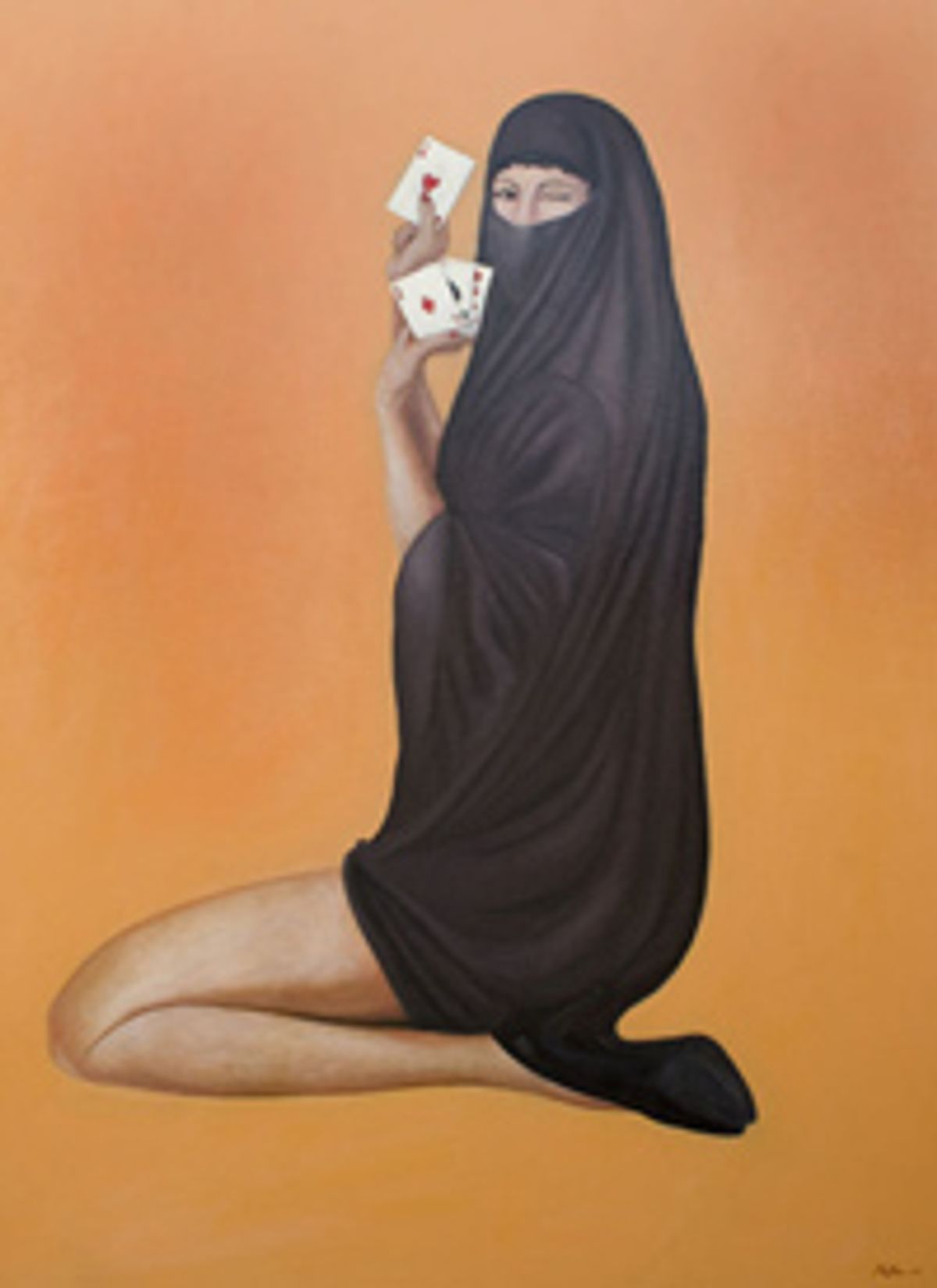 What do you get when you combine symbols of misogyny in the East and the West? As Iranian artist Makan Emadi imagines it, a Muslim woman clutching at her black chador as it blows above her knees, à la Marilyn Monroe in "The Seven Year Itch." Emadi's "Islamic Erotica" series depicts veiled Muslim women in sexualized poses that recall American pinup art and recently caught the eye of Zeynab at Muslimah Media Watch. Feministing took note and asked readers: "Is it a powerful critique of both Eastern and Western sexism? Or is it just perpetuating the worst Eastern and Western sexist stereotypes?"

Emadi spoke to Broadsheet by phone from his Los Angeles home about the burqa, feminist art and receiving death threats.

I saw your "Islamic Erotica" series mentioned in an online discussion of "veil fetish art." Does your work belong in that category? My friends and I kind of joke that wouldn't it be great if I became the Hugh Hefner of the Middle East; it'd be good for the pocketbook! But I don't agree with that characterization. If you look at the way my "Islamic Erotica" series is painted, sexuality isn't the focus, making the models look sexual is not the focus. To me, the word "fetish" fits if it's something people use for sexual gratification and these aren't painted in that fashion.

But you can't control people's response. Some people think the paintings are humorous, but I've also gotten e-mails from people threatening my life.

What is it about the absurdity of this cultural amalgam of, as you say on your Web site, "seemingly contradictory traditions" that has captivated your interest?

It really started in 2002 as a response to the Iraq war. I was immediately against the war and was one of those people who, as many Americans did, saw Bush's plans as naive at best and destructive at worst. But I did not want to do a piece that was just criticizing America's attitudes and traditions -- I've also been quite angry about what's happened to my country under religious theocracies. So, I presented a kind of nightmarish version of sexism -- the East and West put together. I find it, in a way, humorous and paradoxical -- the idea of bringing together two extremely opposite ways of treating women that is, at the same time, sexist. To me this follows the tradition of feminist art. I'm creating a pastiche of two completely opposite yet very similar ways of controlling women.

What do you think of comparisons that are sometimes made between mandated modesty and objectifying overexposure?

I am a cultural relativist. I am certainly not one of those people who believes we can identify different cultural traditions as wrong and change them in the name of freedom. My other profession is as a social worker and I'd like to think I have some understanding of traditions and the power of religion. I don't believe in any quick change or replacement of any tradition.

I don't believe the burqa is wrong, that it should be [eliminated] -- in Muslim tradition women are thought to be objects and they are called to protect themselves and men by wearing the burqa. We should look at the East as well as European and American tradition and the treatment of women. The similarity that I see is that both the East and West value women because of their sexuality first and foremost. I don't think men suffer in the same way.