The Obama campaign's deft use of the candidate's mixed heritage is making it harder to read his candidacy in terms of race. 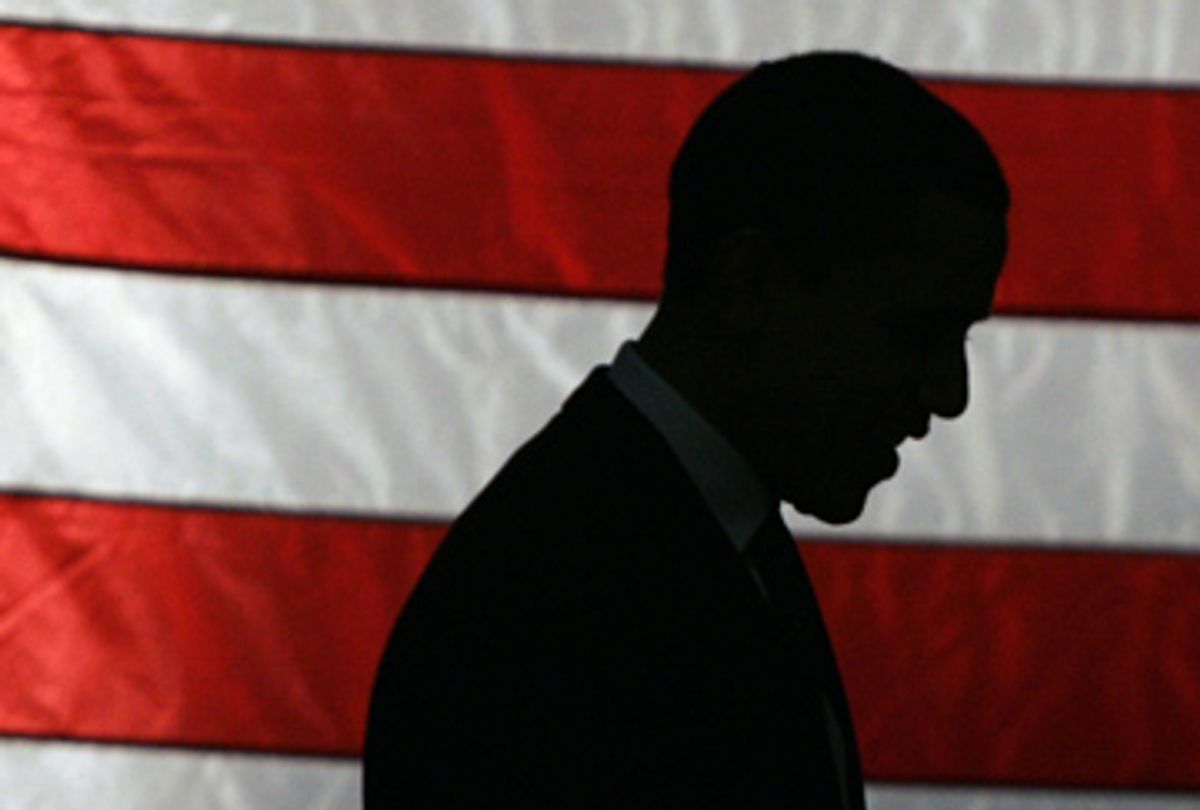 In a campaign marked by firsts, this might be one of the most striking: A photo of a young, radiantly smiling, tan-skinned Barack Obama seated in the lap of his late mother, Ann Dunham, who, while dark-haired, is considerably paler than her son. Another first: Earlier this week, Obama traveled to El Dorado, Kan., the home of his maternal grandfather, and in the course of accepting an endorsement from Gov. Kathleen Sibelius, put special emphasis on his connection to the Midwest through his maternal -- that is to say white -- lineage.

In a campaign in which he has struggled early on to win the confidence of black Americans and gradually won endorsements from revered black cultural icons like Oprah Winfrey and Toni Morrison, this is one of the riskiest moves Obama has made -- but also one of the most genuine.

Ultimately, his growing frankness about his mixed-race heritage has the potential to complicate the simplistic debates about race that have surrounded his campaign since even before it officially began, and in the process perhaps truly unite the country -- but in a different way than his rhetoric habitually promises.

As Obama's campaign got started, black media juggernaut Tavis Smiley exemplified the black community's lukewarm response, declaring, "There is not a black groundswell ... saying 'Run, Obama, Run.'" He pinpointed Obama's lack of common history with other black Americans as part of what made people of color skeptical about him, because he did not have a "long-standing relationship with the black community." Around the same time, prominent black intellectual Cornel West criticized Obama for beginning his campaign in Springfield, Ill. (which he implied is a predominantly white community), instead of at Smiley's State of Black America conference. Like Smiley, Debra J. Dickerson, writing in Salon, described Obama as "not black" in part because his biography does not include the legacy of slavery.

The mainstream media and the public have chosen to describe the Illinois senator as a "black candidate," and for the most part discussed his campaign in the usual stark racial terms -- Is America ready for a black president? Is this potential black president really black? (Or in the more bumbling terms of Joe Biden, How articulate? How clean?) If he is black, how black is he? Does he listen to Jay-Z? How much does he like Jay-Z? Did he use Jay-Z's "99 Problems," during his Iowa victory march, to send a coded message to Hillary that a "bitch" is not one of his problems, either?

The media also mused about whether Obama will, as a "black man," appeal to many black voters instantaneously and/or be rejected by white voters on the basis of his skin color. Obama himself, when repeatedly asked, essentially, which side he is on, categorizes himself as "black" or "African-American," and bases his decision on how he is viewed by the forces that oppress dark-skinned people. Curiously, in the run-up to the South Carolina primary, Bill Clinton drew heat for implying that Obama is a black candidate, because in the mouth of a white man whose wife is the senator's opponent, calling attention to his race appears to marginalize the Illinois senator.

For his part, Obama has never officially changed tack and declared himself multiracial, biracial or anything else, preferring to sidestep the issue entirely. This past week, Obama was forced into a racial corner in South Carolina, where colorblindness is rare. He resorted to a quirky metaphor: "If I came to you and had polka dots," he told 900 people at Winthrop University in Rock Hill, S.C., "but you were convinced that I was going to put more money in your pockets and help you pay for college and keep America safe, you'd say, 'OK, I wish he didn't have polka dots, but I'm still voting for him.'" Or so he hopes.

Obama's racial reality is as plain, yet complex, as that picture of Obama and his mama. It is as unfamiliar and human as the fact that his half-sister, Maya Soetoro-Ng, was born to an Indonesian father, while his other half-siblings were born to his father and a Kenyan mother. We have assumed that Obama is a black man largely because he has some African physical characteristics and blood, and because he has defined himself that way. It seems uncomplicated. Since he looks like what most Americans think of as a black man, talks like one, and would be treated like a black man on the average city street -- that is to say, feared and suspected of wrongdoing -- he must be one. In Africa, though, someone with Obama's background is more likely to stand out for his European background than his African heritage.

Obama has allowed the country to think what it wants about him, perhaps in an effort to reach Americans for whom his intricate multicultural background might prove difficult to parse. As it gets harder for him to deny his biracial heritage -- indeed, as he begins to use it politically, as we saw in Kansas -- will we cease to think of him along those carefully drawn lines? Can we elect a zebra? Will that dilute the sense that an Obama victory would make history? Or will we continue to insist that one drop of black blood makes a man black?

Some people who identify as biracial have taken Obama to task for identifying as black. Biracial author Joy Zaremba recently told NPR that many mixed people believe Obama ought to "come out and be a proud biracial American." Since he is the son of a black Kenyan (there are Kenyans of many races, let's note) and a white woman from Kansas, they argue, to choose his black side denies his white mother, who had a great deal more to do with his upbringing than his father, who left the family when Obama was 2.

But in America, to define yourself as biracial if you happen to be a half-black and half-white politician means risking alienation from black voters, who will presume that you are trying to distance yourself from blackness simply by acknowledging your European genes. So while groups like the NAACP feared a dilution of black political power and fought efforts to introduce a more complex system for racial self-identification on the U.S. census, a new generation of people for whom mixed race might not invoke the specter of slavery want to celebrate their dual status.

If Obama embraces his inner diversity, though, he might also risk confusing white voters of the sort that swept him to victory in Iowa -- at least the sort who believe that they can tell who is black just by looking. Few politicians of mixed race have publicly acknowledged all sides of their background, though some of the most prominent figures in black politics have been light-skinned enough to pass: W.E.B. DuBois, Ralph Bunche, Adam Clayton Powell Jr. and others. Which is not to say that these men knew their European ancestors, let alone felt that they owed them anything. To self-identify as black isn't always about literal, visual blackness, but about sympathy for political positions that benefit blacks. Cornel West made this point even as he criticized Obama for missing Smiley's conference. These politicians also rose to notoriety in an age when the political line between blacks and whites was considerably sharper than it is now, even though the genetic line was perhaps even blurrier than it is now.

Despite the reversal of racial fortunes in recent years, there has never been a compelling reason for Obama to campaign as anything other than "a black man." To Middle America, he would seem to be lying otherwise.

However, the more scrutiny Obama's heritage gets in the media, the less possible it will be for him to sidestep the issue, or for us to legitimately read his candidacy in terms of race -- by which we too often mean blacks vs. whites. Perhaps Obama's shyness stems from fear of the kind of criticism Tiger Woods got for coming out as "Cablinasian" and refusing to get involved in the NAACP's fight against the display of the Confederate flag in South Carolina. Or maybe he's using what might be called the Cadbury Egg strategy -- present the black side first, and then go for the white center. But it will be interesting to see what happens when the potential black president poses for photo ops with his white cousin, or when his half-white, half-Indonesian sister stands next to him on the podium. How "black" will Obama be then? How "white"? Maybe the country will be so flummoxed that we'll just have to call him a man.