Genuinely inspired, the Facebook generation is turning out to vote in record numbers. Will they make a difference? 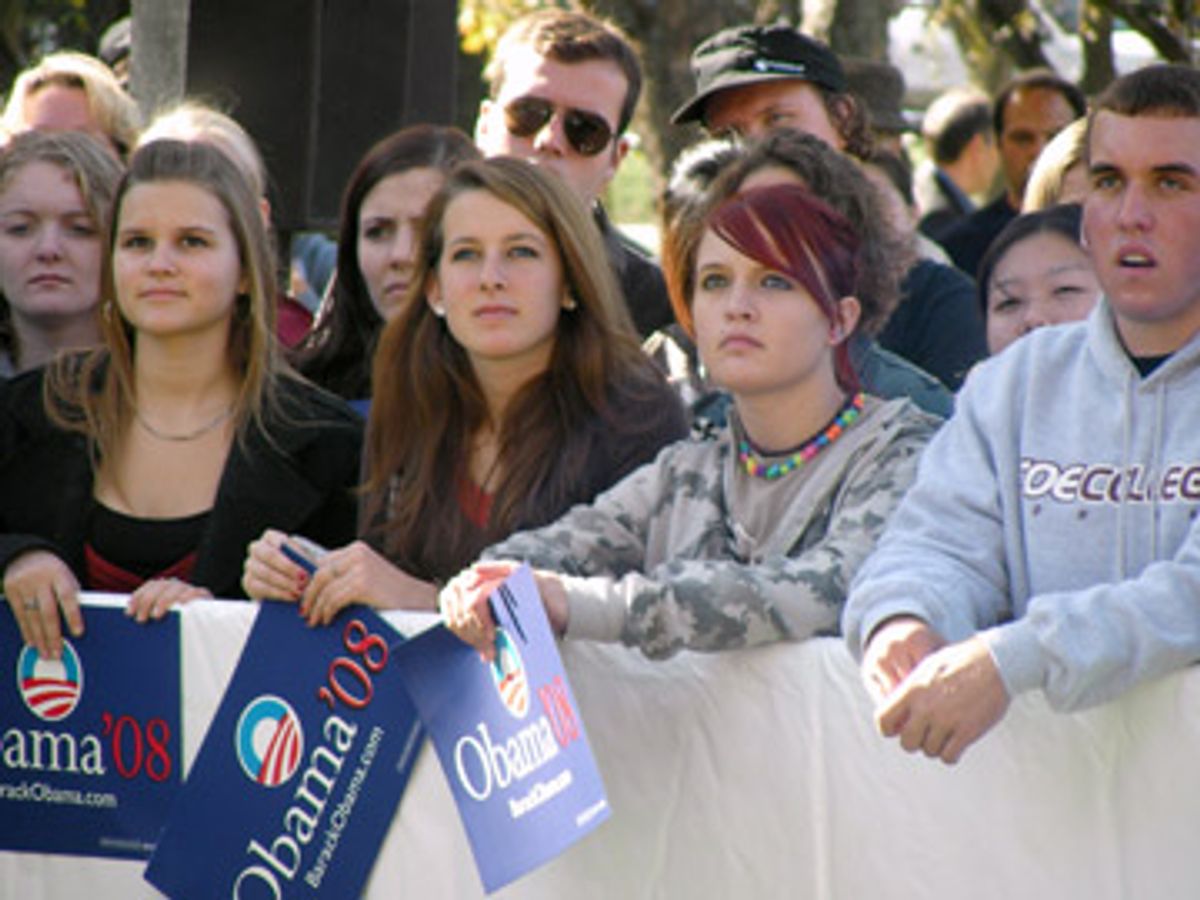 UC-Berkeley freshman Amy Purvis turned 18 in November and is pumped about voting for the first time -- although she hasn't decided which Democrat she's going to choose on Tuesday. Just before noon on a sunny morning, Purvis, with long brown hair and dangling earrings, strides across campus decked out in a bright red T-shirt that announces "I VOTE." Her arms bear three red, white and blue wristbands that say "VOTE," and she's carrying a bucket of more wristbands. The environmental-economics major, who is from Winters, Calif., is making a beeline to Room 132 in Mulford Hall to a class on soil microbial ecology, but not because she's ready for a lesson on the tiny organisms in dirt. She's headed there to do a "class rap" on voting.

On the chalkboard, Purvis writes, "Don't forget to vote on Super Tuesday," underlining "Super" and "Tuesday." A cheerleader for civic engagement, she stands in front of the class and reminds the 30 students, taking pens and notebooks out of backpacks, that the Iowa caucus and New Hampshire primary saw a super-high youth turnout. Purvis tells them to take out their cellphones and text-message 10 of their friends the note she's written on the board. "Text all your friends!" she exclaims, tossing a red wristband to the first student who obliges, to appreciative laughs from his classmates. "I'm really psyched about voting, and you should be, too!" she declares. Another four kids take out their phones to heed the voting call.

At campuses across California, students like Purvis are working with CalPIRG, the California Public Interest Research Group, to encourage their friends and fellow students to vote this Tuesday. Already the primaries have seen a new surge of young voters. In New Hampshire, participation more than doubled among voters under age 30, compared to the primary held in 2004. "All the measures of young voter interest in elections are shooting up," says Daniel Shea, a political scientist at Allegheny College. "There is no reason to believe that young voters won't come out in record numbers on Super Duper Tuesday. Young voters are paying attention. They're online. They're blogging. They're talking about the election. They're pumped. So they're going to come out, and they very well may shift the outcome in several states."

Try to imagine that you were still in elementary school when George W. Bush took office, and you'll get a sense of how eager these first-time voters are for a leader to call their own. They know global warming and international fallout from the Iraq war will affect their generation more than anyone else voting in this election. And the issues that affect them the most right now, such as college affordability, have been ignored by Washington for as long as they can remember.

Eighteen-year-old Amber Moller, a society-and-the-environment major at UC-Berkeley, is excited to be a first-time voter this Tuesday. Wearing giant sunglasses and a T-shirt proclaiming "A life without knowledge is death in disguise," the freshman from La Quinta, Calif., just outside Palm Springs, is stationed on Berkeley's Sproul Plaza at lunchtime, recruiting her fellow students for a campaign to fight homelessness. She says her choice for president was tough because the candidates' positions are "very similar," but she settled on Dennis Kucinich because he's "a man of his word." When Kucinich dropped out of the race, Moller decided to vote for Barack Obama. "He's providing hope for the youth, and I think he's going to be a fresh start," she says.

On the Berkeley campus, Moller is a new voter with a lot of company. Students here favor Barack Obama, with 61 percent of them supporting him in an admittedly unscientific League of Young Voters online primary on the social networking site Facebook. Among young voters who participated in the Facebook primary, 48 percent of Californians went for Obama, as did 44 percent of all young people in the United States. On Facebook, which is popular with college students and recent grads, Obama's profile has more than 300,000 friends, while Hillary Clinton's has around 85,000.

Support for Obama has been strong among those under 30 who voted in the real-world primaries and caucuses. In South Carolina, 67 percent of Democratic voters under age 30 cast their ballots for Obama. In Iowa the figure was 57 percent, and in New Hampshire 51 percent, according to CIRCLE (Center for Information and Research on Civic Learning and Engagement), a nonpartisan group that studies youth civic engagement. Obama has done especially well with 18- to 24-year-olds, while Clinton has drawn support among working-class 25- to 29-year-olds, beating out Obama in that age group in New Hampshire. On the Republican side, young voters have been all over the map; in Iowa and South Carolina they favored Mike Huckabee, who was popular with young evangelicals; in Nevada, Mitt Romney was their man; and in New Hampshire and Florida, John McCain got the nod.

"Ever since Obama and Huckabee took the youth vote and won in Iowa, the candidates have recognized that young people are going to come to the table, and now the politicians can't stand them up anymore," says Carlo Marcelo, research associate for CIRCLE, noting that the major campaigns have youth-voter directors. Behind's Obama's youth campaign is Hans Reimer, former political director for Rock the Vote. Clinton's most forceful young advocate may be her daughter, Chelsea Clinton, 27, who is campaigning on college campuses in key states. On the Republican side, it's a blog-off for voters who live online. John McCain's daughter, Meghan McCain, 23, is on the stump for her dad at McCain Blogette, while Mitt Romney's sons are typing furiously on Five Brothers.

Still, even with record numbers of young people turning out for the primaries this year, their participation -- and impact -- is less than that of older voters. The Florida primaries saw participation triple for voters under age 30 compared to the primaries in 2000, lifting their turnout from 4 to 13 percent. Notably, more Democrats in this age group than Republicans showed up, even though their votes won't count for delegates at the convention. At the same time, participation of those age 30 and up increased from 14 to 33 percent. Translation: A tripling of young voters' participation did not even bring them up to same level of participation that the old fogies had back in 2000.

There are several of reasons for this. Younger voters are less likely to be registered to vote and less likely to vote even if they are registered, simply because they may not have voted before. They may have to re-register more often, since they're more mobile than older Americans, moving to new jobs, apartments, schools and cities. Students who go away to college can vote absentee back home, although that presents another logistical hurdle.

Back on Sproul Plaza, students on their way to class or lunch walk a gantlet of two long rows of card tables, where campus groups vie for their attention, stumping for everything from the Ski and Snowboard Club to Berkeley Students for Life. The upcoming primary is well represented with Students for Barack Obama, Students for Hillary, Cal Berkeley Democrats, and Berkeley College Republicans.

At the Berkeley College Republicans table, Josh Curtis, 18, declares that he's already cast his absentee ballot for John McCain. "Sweet!" cheers a fellow GOP'er in a Cal sweatshirt. For Curtis, whose top issues are foreign policy, the economy and abortion, it was a pragmatic choice. "McCain is the only one who can win the general election on the Republican side," he says. He also considers himself more moderate on immigration and the environment, like McCain, but shares the most similarity with his candidate on the war. "I think it's important that America stick it out until the end, when Iraqis have enough security to really establish their political system. I think that if we left now, it could be chaos or even genocide."

Over at the Cal Berkeley Democrats table, Keith Yetter, 20, a poli-sci and philosophy major, and Ariel Brooke, 17, a poli-sci and music major, are split on their support. "It's a huge milestone that it's going to be a woman or an African-American," says Yetter, who supports Clinton. Brooke says she's "leaning toward Obama, but I would be very happy if either of them get elected." On the last day to register to vote in this primary, their group and other student political groups registered 1,500 new voters on campus. Kristin Hunziker, 19, from Redding, Calif., says she's an Obama supporter because she likes his stance on technology issues and foreign policy and thinks he'll bring new transparency to government. "It's the kind of change that I'm looking for from the Bush regime," she says.

At the Students for Barack Obama table, Rohan Wagle, 18, a freshman from San Jose who is majoring in business administration, says that Obama gives students like him a reason to go to vote. "He's the most inspiring leader that I've seen. He's the first candidate who has been able to court the youth vote and bring them out to the polls. I think he's a fresh face who can bring change to Washington because he doesn't have favors to repay to special interests, because he doesn't take any money from them."

Just yards away, sitting behind a Hillary for President table, Katie Nguyen, 18, from Orange County, says she likes her candidate's experience. "It's been said that students are going to vote for Obama, but I think that's because they can't see through his charismatic personality. He's got only three years of experience. Thirty years dupes three."

Whichever candidate they chose on Super Tuesday, young voters' turnout in the primaries suggests they may participate in greater numbers than ever before in the general election. "Young folks could be the trump card come the election," says Marcelo. The candidate who spurs the under-30s into action, he adds, could command a major voting bloc. But despite their burgeoning numbers, all those excited voters can't carry an election alone. After all, in 2004, young people were the only age cohort who went for John Kerry.