Undecided '08: Should I vote for Clinton or Obama?

On Super Tuesday, for the first time in my life, I will walk into the voting booth without knowing who to vote for. I blame John Edwards. 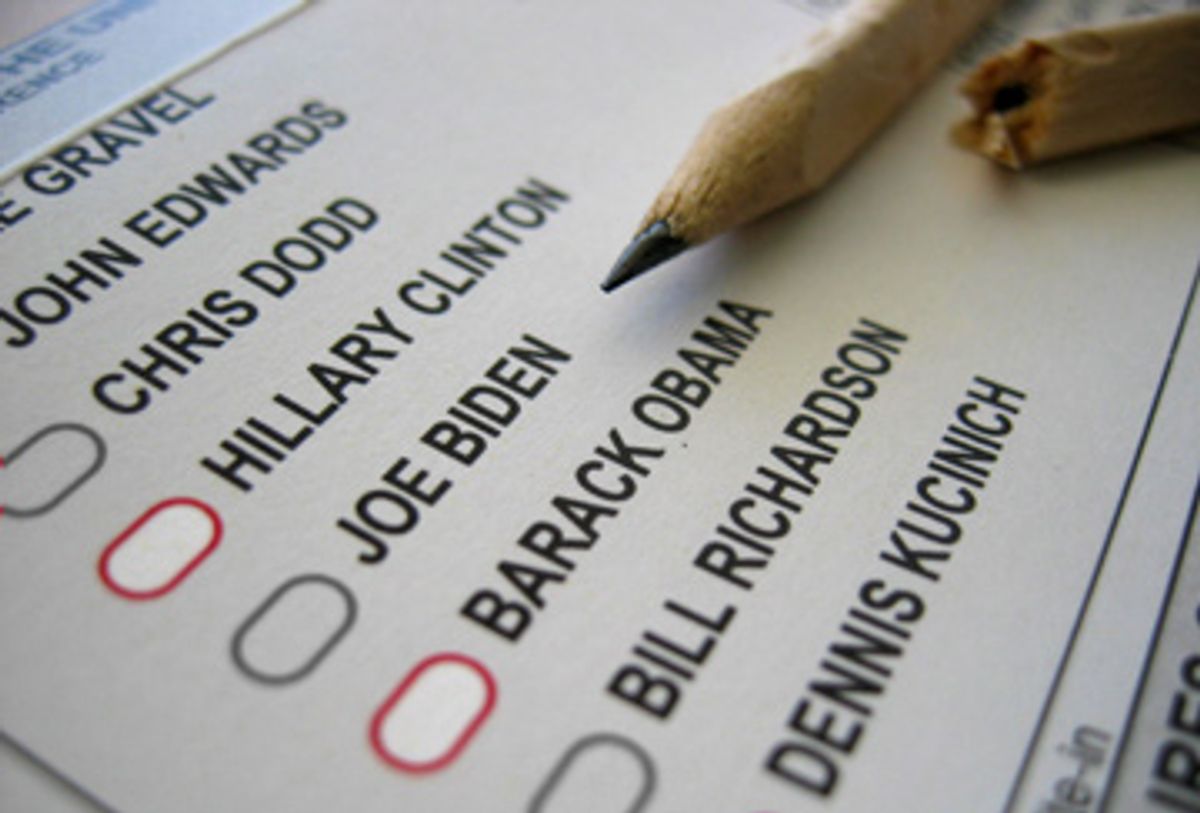 Here are some comments that I make, every four years or so, when the television networks cut from the end of a presidential debate to a living room full of mysteriously undecided voters: "Where do they get these people?" "Who is dumb enough to be undecided this close to an election?" "Do they not read newspapers?"

Much to my consternation, it's almost Super Tuesday, and I am an undecided voter. I am a political junkie, a Democrat; I read the papers. But for the first time in my life, barring some truly dramatic last-minute development, I am going to walk into a voting booth on Tuesday, pull a curtain closed, and see how the spirit moves me.

This is extremely humiliating. Not simply to be undecided. But to be undecided hours before the first primary in my memory in which my vote will make one iota of difference; to be undecided in a race that is historic, that has provoked more excitement than any I've yet lived through. I'm undecided at a moment -- one I thought might never transpire in my lifetime -- in which I will have the opportunity to pull a lever for a woman or an African-American. I am undecided while many around me whoop it up, volunteer, yell and cry at rallies, and feel the thrill of political certainty that I cannot share.

How is it possible that this electoral moment that should have me jazzed has instead left me paralyzed, not only by my inability to make a goddamned choice already, but by the impending sense of shame. Why is everyone else feeling so good, when I suspect that whatever decision I make is going to leave me feeling so bad?

From the start, the Democratic field offered only varying degrees of dissatisfaction: Where was the candidate who believed that all Americans deserve educations, healthcare, the right to marry whom they please, and more reproductive freedoms than they could possibly use up in a lifetime? He or she did not exist, at least not in any purely terrestrial incarnation. But John Edwards, with his focus on eradicating poverty, his acknowledgment that we live in a nation riven by class difference -- John Edwards was as close as it got.

Sure, as the race wore on, it was clear he wasn't going anywhere, and I knew it. He joined the nasty post-Iowa rag-on-Hillary party, making derisive comments after the purported "crying" incident; this infuriated me, made me question my belief that he was the candidate most committed to women's issues. It's possible that, in my frustration with him, I might have called him an Orc. And yet, the fact remains that I likely would have chosen him on Tuesday, secure in the knowledge that in doing so, I could cast a vote in accordance with my principles.

But now John "Orc" Edwards has dropped out at a moment so inopportune that he has made me face the truth: He was never my only candidate; he was my refuge. Voting for the white guy -- based on how I feel about the "issues" -- would have afforded me a guilt-free way to rise above the nasty psychobabble of identity politics taking place between the two people who actually have a chance in hell of becoming president. I wouldn't have to get my hands dirty by choosing between two very similar candidates whose major differences seem to swirl around their race and gender; I wouldn't have to tap one underrepresented population on the shoulder and say, "I pick you to advance first"; I wouldn't have to entangle myself in the extremely sticky question of how, exactly, my gender and my feminist politics are supposed to be guiding me here.

It's not that I hadn't considered other ways of chickening out: There was a period when I was planning to vote for Kucinich. And I've done a lot of thinking, recently, about my late grandmother, who was so dissatisfied with Robert Wagner, who served three terms as the Democratic candidate for mayor of New York, that she walked into a voting booth every year he ran and wrote in her cat. This did not, all in all, sound like such a bad idea to me. Ike Traister would be a damn sight better in the Oval Office than the mammal we've got there now, for example.

But all these cunning plans unspooled in the days when I assumed that the race would be tied up by Super Tuesday, when a protest vote in the New York primary, which never matters, would function simply as a protest vote. But Super Tuesday is here; Kucinich has dropped out; Edwards is gone; Clinton and Obama are neck and neck; my vote matters. Just as Luke realizes, after his faux light-saber battle on Dagobah, that he must face Vader, so have these conspiring circumstances led me to the realization that I must confront head-on the question of whether or not to vote for Hillary. It is unavoidable. It is my destiny.

Never before have I understood the secrecy surrounding voting. Of course I understand secret ballots. But even as a child, I was perplexed by why it was considered impolite to ask my teachers, my friends' parents, people at the voting booth, whom they had voted for. For me, support of a candidate has always been a public construction, such a part of my identity. Even as a journalist -- journalism having evolved somewhat from the days when reporters were discouraged from casting votes or belonging to a political party -- disclosure seems to me to be an honest way to get the subjective out of the way, thereby clearing honest space for professional objectivity and fairness.

But on Tuesday, I have a feeling that for the first time in my life, I'm going to keep my vote to myself.

I think, every day, of what it would feel like to vote for Barack Obama. I can feel the pull of Obama-mania, how thrilling it would be to see the country come alive with excitement for a young person, someone with fresh ideas, a man beholden to few in Washington, a candidate who has lived around the world, who does not seem to take a cowboy approach to foreign policy, who has forsaken big business opportunities in order to address the problems of the working class. I think also that, in the United States, race (especially when combined with class) remains a more formidable barrier to professional, political and economic success than gender. Hillary Clinton may have a harder time getting elected than Obama because, frankly, Obama can be comfortably looked at as an exceptional black man, not as a harbinger of what's to come, whereas Hillary will stand in for all those pushy broads coming to take your jobs, college admissions letters and seats in Congress. If Hillary's success is less exceptional, does she deserve my vote as much as Barack?

I think of how I would love to be part of the wave of enthusiasm for this smart, charismatic man, of how he wipes the floor with Clinton as an orator; I consider that the dashing Obama, and his youthful adherents, have the chance to take John McCain, while Clinton would bring every angry, resentful white guy out of his parents' basement to vote against her.

And then I think of how, when I was 9, my dad took me into the voting booth so that I could pull the lever for the first female vice president, and how he told me that he hoped that in my lifetime I would have the opportunity to vote for a woman at the top of the ticket. And I think about the fact that this is it -- my chance to pull that lever for her, so that I can do it again come November.

Who am I to turn up my nose at her because she's imperfect? I always figured the first female president would be a Thatcher-style Republican -- how can I complain about a Wellesley-educated Democrat who once resembled the second-wave women who fought for my ability to control my own reproduction and get paid as much as my male colleagues?

How could I ever tell those women that I voted for Barack Obama? What do I tell my aunt, my mother -- women who aren't crazy about Hillary's politics either, but whose extra decades on the planet have left them more acutely aware than I about the fleeting opportunity she presents. What if I have a daughter someday and she asks me about why we've never had a woman president? Do I tell her that we once came close, but that Mommy was really digging Obama that day? (Lest nostalgia cloud my decision too thoroughly, I should add that my father, the one who made sure I could vote for Geraldine Ferraro, is dissatisfied with his options, and planning to write in the cat.)

So as much as I yearn to run wildly into the streets with the jubilant hordes of Obama supporters, if I cast my vote for him, it will be a silent one.

But a vote for his opponent would be, perhaps, even more private. There is shame in voting for Hillary Clinton, make no mistake -- pulling a lever for someone who voted for Iraq and proposed anti-flag-burning legislation provokes its own brand of self-loathing. When I think about doing the deed, I consider the fact that she's brilliant, that she's competent, that she knows her shit inside and out, that she's battle-tested, tough as nails, and that she wipes the floor with Obama in the debates. She provides a steel-solid track record, he a nimbus of vague hope.

But here is the honest part: Hillary Clinton is a woman. And so am I. And my president doesn't have to look like me, any more than she has to be a person I want to have a beer with, but I can't pretend that it doesn't mean something, something really important, that we've never had one who looked like me before.

And so as much as I protest about how I'd never vote for someone just because she's a woman, a vote for Hillary would not be a purely intellectual choice, and certainly not a politically enthusiastic one, but an emotional one, and in that, I would be conforming to every assumption about why I vote and how I vote. I don't want to be the girl that all the cool Obama-supporting progressives assume I am, if I happen to feel compelled to choose the woman in this contest, in part because she's a woman. In this, I guess, the shame is not so much about voting for Hillary, but in fulfilling a feminized -- and, relatedly, devalued -- expectation of Democratic womanhood. And in this, it would only be fair to conclude that I, the big feminist, am in my own way hiding from my own gender.

And so I'll spend the next two days waging this internal battle. I understand that while many Super Duper Tuesday voters out there are sure and passionate in their choices -- and I wish I were among you -- I also know that there are many others, male and female, black and white, young and old, who are feeling this same tugging in their bellies and their brains. I'm not the only one who, for the first time in my life, will understand exactly how private (and perhaps profound?) the casting of a ballot can be. All I can say with assuredness is this: Whatever move I make, I bet it's going to hurt.