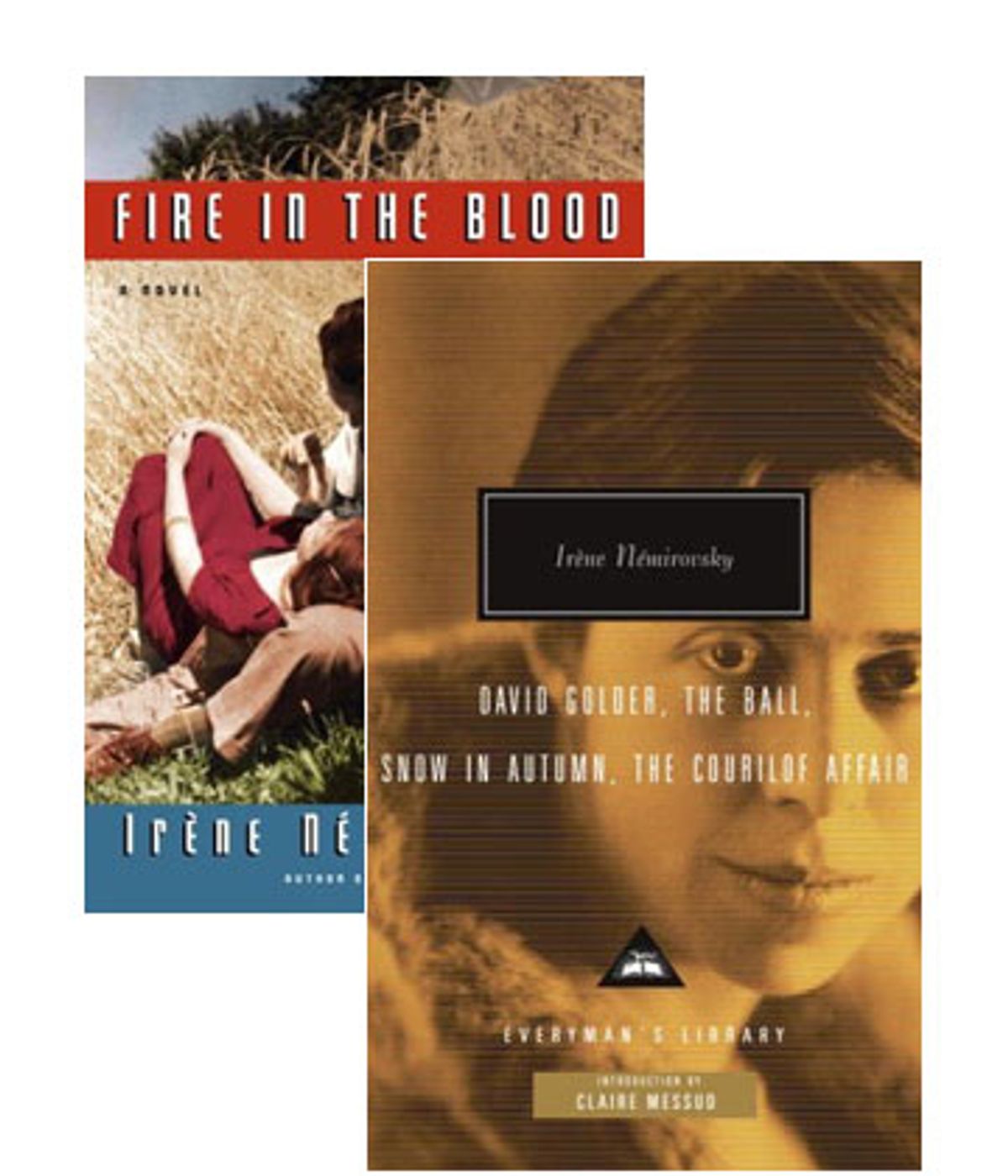 One of the literary events of 2006 -- the literary event for many critics and readers on both sides of the Atlantic -- was the publication of "Suite Française" by Russian-born writer Irène Némirovsky. And one of the big questions critics must deal with this year is whether recent release of Némirovsky's "Fire in the Blood" and the current publication of four early novellas will enhance or diminish her reputation.

For those who missed it, the basic facts of Némirovsky's story are that she was born in Kiev in 1903, the daughter of a Jewish banker from the Ukraine. In 1919 her family left St. Petersburg for Paris, and in 1929 her first novel, "David Golder," was published. Its success was immediate; in 1930 it was made into a film by Julien Duvivier. None of her subsequent work equaled the success of "Golder" (though her novel "Jezabel" was published in the U.S. in 1937 under the title "A Modern Jezebel"). In 1939, Némirovsky converted to Roman Catholicism and, with her husband, Michael Epstein, applied for French citizenship, which was refused. By 1940 both she and Epstein, a banker, were denied the right to work, and, with the approach of the Wehrmacht on Paris, they fled with their two young daughters to the village of Issi I'Eveque in the south of France. In the summer of 1942, Irène and Michael were arrested and eventually sent to Auschwitz. Némirovsky died of typhus a short time later, and her husband was sent to a gas chamber.

Nearly 50 years later, her eldest daughter, Denise, discovered that her mother's notebooks were not in fact a diary but two parts of a projected giant novel about the German invasion and occupation of France. Whatever the remaining parts would have added to the novel, "Storm in June" and "Dolce" (the two sections published as "Suite Française") are impressive works on their own, even in their rough form. Némirovsky's notebooks make clear that her literary model was Tolstoy's "War and Peace," but the characters' bewilderment in the chaotic retreat from Paris before the German advance reminds one more of the Waterloo scenes in Stendhal's "The Charterhouse of Parma." "Dolce," about the disintegration of social mores in a French village occupied by a German cavalry regiment, is smart social observation of the kind Edith Wharton might have written during wartime. Together, the books serve as a kind of time capsule offering a cutaway view of France in the early months of the war. (Némirovsky seems to have had little interest in a Tolstoy-ian political overview; oddly, at least for the modern reader, the word "Nazi" is never mentioned, and some of the French characters are so arrogant and smug that you almost root for the Germans to knock the starch out of their insular, complacent little world.)

For all her Russian heritage, Némirovsky considered herself a French writer, and the best evidence for that is "Fire in the Blood," another work unpublished in her lifetime and discovered among her papers by prospective biographers. Begun in 1938 and probably reworked in the summer of 1941 before her arrest, it has some parallels (or so her notebooks suggest) with the projected third section of "Suite Française" -- and some scholars have speculated that it was intended to be the third section. But "Fire in the Blood," a miniature, seems altogether different from the sweeping aspirations of "Suite Fran¸aise." At least rendered in Sandra Smith's translation, it has more in common with the provincial novels of French Catholic writers François Mauriac and George Bernanos (the influence of Chekhov, about whom she wrote a biography, can also be discerned).

The story is narrated by Sylvio, an elderly bachelor who returns to his village after years at sea. He confirms his status as an outsider by telling us early on, "For I sometimes feel I've been rejected by life, as if washed ashore by the tide. I've ended up on a lonely beach, an old boat, still stolid and seaworthy, but whose paint has faded in the water, eaten away by salt." Silvio perceives the tangle of events that occur in the small village from both inside and out; gradually the truth emerges that he has been a participant in crimes as well as a witness. Since many of the characters in Némirovsky's early works were autobiographical, it's intriguing to wonder if Silvio's own bleak worldview echoes Némirovsky's at that point in her life.

The novella (it's about 120 pages of text) is haunting and enigmatic, the age-old relationships among the villagers summed up in deft brushstrokes: "My God, a wedding in the provinces is such a gathering of ghosts! In big cities, people either see each other all the time or never, it's simpler. Here ... Corks in the water, that's what I say. Hey presto, there they are! And what a stir they cause, how many old memories they dredge up. Then down they go again and, for ten years, they're forgotten." That a Parisian-Jewish outsider could have gleaned so much about provincial life in so short a time is a wonder.

Unfortunately, what "Fire in The Blood" brings to our appreciation of Némirovsky as a literary artist is eroded by the four short novels newly published by Everyman's Library. "The Ball," about a 14-year-old girl observing her parents' preparations for a huge party, is melodramatic and negligible. "The Courilof Affair" is an attempt at a political story, interesting only in that it anticipates the "Dolce" section of "Suite Française." "Snow in Autumn," the story of a Russian family's emigration to France, is interesting mostly because of the treasure trove of autobiographical details Némirovsky preserved in it.

"David Golder," about the final months in the life of a grasping Jewish businessman, published when Némirovsky was only 26, is bound to get the most attention. The reader will be quick to compare the main character's self-disgust as he nears the end of his life with that of Tolstoy's Ivan Ilyich. But what to make of such passages as this, when Golder is berated by his wife: "Brute! You brute! You beast! You haven't changed, have you? You haven't changed a bit. You're still the little Jew who sold rags and scrap metal in New York, from a sack on your back." And this: "Golder looked with a kind of hatred at Fischel, as if at a cruel caricature. Fat little Jew ... he had a comical, vile, and slightly sinister air."

The torrent of self-hatred that propels "David Golder" is difficult to dismiss, particularly as it was critically acclaimed by many of France's leading anti-Semites. By 1935, Némirovsky herself had become defensive about it. In Claire Messud's introduction, she quotes her as saying, "If there had been Hitler [at the time] I would have greatly toned down 'David Golder,' and I wouldn't have written it in the same fashion." And, three years later, "How could I write such a thing? If I were to write 'David Golder' now, I would do it quite differently. The climate is quite changed."

Such rationalizations are baffling; so intelligent a woman could hardly have not understood the implications of what she had written in 1929, a novel that would bolster the prejudices of those who supported Hitler. And how are we, in the 21st century, to separate her talent from such apparent ugliness? I think it's safe to say that Némirovsky's legacy won't emerge until many a nasty debate has been waged in the literary press.

Many are now asking whether it's even possible to view Némirovsky's work objectively without reference to the tragic back story. But it's worth considering that this tragedy is not straightforward, but rather tragedy tinged with a strong dose of bitter irony. Her situation, after all, was not that of Bruno Schulz, the great Polish writer and artist murdered by a Nazi office in Austria.

In her thinly veiled autobiographical novel, "The Wine of Solitude" (1935), Némirovsky's protagonist says, "I spent my life fighting an odious blood, but it is inside of me." Since the work is a novel, it is perhaps unfair to ascribe those sentiments to its author, but read Némirovsky's work in whatever context you like -- the fact is that if non-Jews had written many of the things she wrote, they would be reviled as anti-Semitic. Leaving aside that issue, Némirovsky's politics, to say the least, were highly dubious. Many of her closest friends were extreme right-wingers who went on to become Vichy and Nazi collaborators, and she regularly contributed to, among others, Gringoire, a virulently anti-Semitic newspaper. Moreover, her contributions were sometimes printed under pseudonyms.

So confident were Némirovsky and her husband that their connections would protect them that they refused to flee to an unoccupied zone. (After their arrest, Epstein wrote to the German ambassador in Paris asking that his wife be spared because her writing was anti-communist and anti-Semitic, and she should therefore be regarded as friendly to the Vichy government. The letter is included in an appendix to "Suite Française," and the readers must form their own conclusions as to whether it was genuine or a desperate plea for her freedom. In any event, as Alice Kaplan pointed out in an article on "Suite Française" in the Nation, it would have been interesting to see what would have happened if Némirovsky had survived the Nazis and submitted the book for publication after World War II; there's a strong possibility that the Gaullists' hatred for everything Vichy might have led to her being blacklisted in France. ("Other writers," Kaplan noted, "were blacklisted for less.")

What, then, are we left with so far as Némirovsky's literary reputation is concerned? It's possible that, given the publicity engendered by the recent releases of her work, some scholars will now delve into her early novels and find some spark of genius that eluded her contemporaries. The four novellas in the "David Golder" collection are more interesting from a sociopolitical perspective than an aesthetic one. "Fire in the Blood" is superb; it is also short and atypical of much of her work. That leaves only "Suite Française" to speak for the promise of genius currently being claimed for her.

It may well be, as Andrew Riemer argued in the New York Times, that the first drafts of the two surviving parts of "Suite Française" "are the surviving fragments of an unfinished masterpiece." But how would we really know? Some would counter by saying that, after all, "The Castle" was unfinished and we still regard that as a masterpiece. But it might be closer to the mark to say that because of Kafka's other work, we recognize "The Castle" as the work of a man of genius rather than a masterpiece in and of itself. The same can not be said of "Suite Française" in relation to Némirovsky's other books.

"Every interrupted life," Jean-Paul Sartre wrote upon the death of Albert Camus, "even that of so young a man, is, at the same time, a record that is broken and a complete life ... We shall all have to learn to see this mutilated life-work as a whole life-work." So, too, will we have to learn to view Irène Némirovsky's work without giving her the benefit of sympathy. In "Storm in June," a character wears a ring with the inscription "This thing of Beauty is a guilt forever" -- whether the error in translation is the character's or Némirovsky's (or even, perhaps, deliberate) isn't clear. Whatever, the gaffe is intriguing and suggests the enjoyment tinged with ambivalence with which we will probably have to regard Némirovsky's lifework from here on in.