Barack Obama and Hillary Clinton are both claiming victory. But given the way delegates are awarded, the only clear victors are the spin doctors. 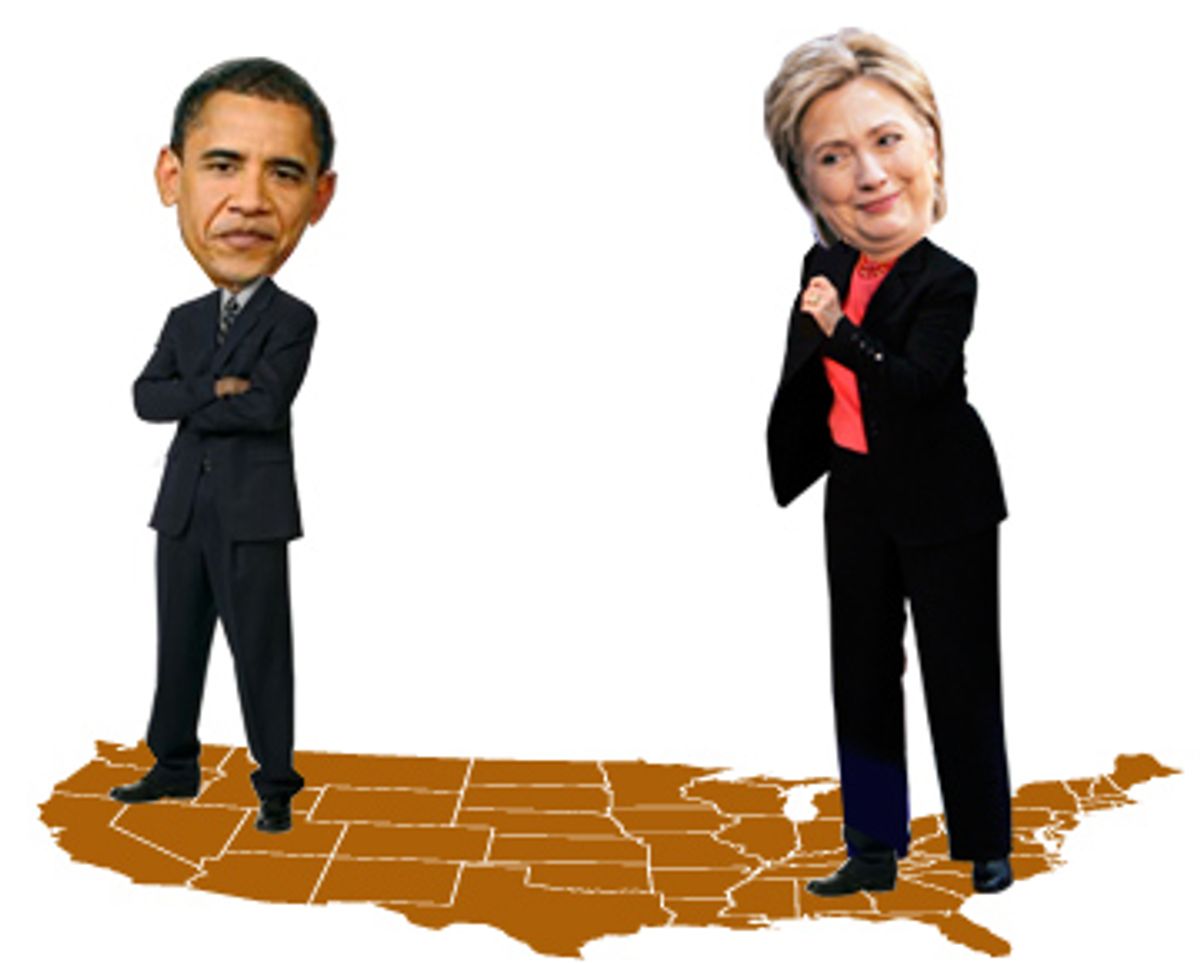 Which Democrat really won on Super Tuesday? The simplest answer, if also the most unsatisfying, is that neither did. Hillary Clinton won the largest states, but Barack Obama won the most states. Clinton, by a very slim margin, probably won more votes, but Obama, by a similarly narrow margin, may have won more delegates to the Democratic Party's convention.

The above, in a couple of sentences, is the two sides' Super Tuesday spin: Clinton's camp claims decisive victories in the largest contests, while Obama's claims a lead in the one stat that matters most -- the delegate count. In fact, the very last of the vote totals are still being counted. But the real reason there is no clear result in this close race is that the system for awarding delegates at the Democratic convention is convoluted and in some ways beholden to fuzzy -- and not very democratic -- math.

If you add up the votes in every primary state, you find that Clinton won 7,250,270 votes Tuesday, while Obama won 7,043,455. That number is preliminary -- not every vote in every primary state has been counted as of 9 p.m. EST on Wednesday -- and it is incomplete, because states that held caucuses, rather than primaries, didn't release their popular vote counts. Still, the stat suggests a very close night: Clinton won 50.7 percent of the vote, while Obama won 49.28 percent. A draw.

The Clinton campaign has declined, so far, to put out its own projections on delegates. In a press call, her advisors said that their count was shaping up to show an extremely close delegate tally.

News organizations that have been keeping track of delegate counts, meanwhile, have put out numbers that settle nothing -- every outfit, going by formulas that are hard to determine, has arrived at a different number. They're not done counting, but no outlet, so far, puts Obama ahead. NBC News, however, has projected that he'll win the count, and some political bloggers' projections also put Obama very slightly in the lead.

But even if you believe Obama's data, should his campaign really be crowing that a delegate-count lead constitutes a "win"? After all, what does it mean to narrowly win the delegate count while also narrowly losing the popular vote? And will his delegate lead translate into actual support at the convention?

One reason that different news organizations give us different delegate numbers is that counting delegates is not like counting dollars. It involves a lot of math, a great deal of granular election-results data, and the spreadsheeting skills of a ninja.

Theoretically, the Democratic Party allocates delegates in proportion to the number of votes that a candidate receives in any state. The idea is that these delegates will then go on to the party's convention and vote for the candidate that voters in their states have chosen.

In close races, though, the theory can break down. That's because delegates are allocated according to formulas that are in some ways undemocratic -- according to these formulas, it is possible for a candidate to win votes in some places but not any delegates at all. (More on this below.) This means that a candidate can win the popular vote in a given state but still lose the delegate race there.

We saw this happen, in fact, in the Nevada caucus, where Clinton garnered more support among caucus-goers, but ended up winning only 12 delegates to Obama's 13.

William Mayer, a political scientist at Northeastern University who is an expert in the nomination process, points out that the odd result in Nevada was caused by a factor that could have thrown the delegate count slightly off the popular vote count in other areas, too.

But most of the delegates in a state -- 65 percent -- are awarded according to a different formula, one that takes into account a candidate's performance across the state's different congressional districts. Under these rules, if a candidate does much better in a few congressional districts than he does statewide, he could win an outsize number of delegates in those districts -- more, that is, than his statewide vote totals would call for.

Mayer points out a scenario in which this math can lead to a candidate getting more delegates than his popular vote might lead to: Imagine that in a given congressional district, three delegates are up for grabs. If a candidate gets 52 percent of the vote there, the math gives him two delegates, while his opponent only gets one. That is, he gets two-thirds of the delegates -- 67 percent -- while only winning a bare majority of votes.

That's precisely what happened in Nevada's caucuses. Obama beat Clinton by a slight majority in the state's second congressional district. But since that district had only one delegate, Obama got the whole thing. He won a slight majority of votes, but he won 100 percent of the delegates.

Before Tuesday's primaries, the political analyst Charlie Cook pointed out that Obama could use the allocation math to his advantage in his home state of Illinois. In several heavily African-American counties around Chicago, Obama's high margins would amount to a 7-to-1 win of the delegates there. Though Obama won the state by 67 percent of the vote, he may have won 90 percent of the delegates in these areas.

Political analysts stress that the key thing to remember about any delegate count you see floating about now is its impermanency. It's true that delegates are the official measure of a candidate's success -- delegates, on paper, win the nomination at the convention.

But no nomination fight in recent memory has rested on delegates. If it really comes to that -- if we get to the Democratic convention with no clear winner -- "you're going to have a lot of people scrutinizing every individual delegate allocation very closely," says Burdett Loomis, a professor of political science at the University of Kansas. It seems unlikely that the fight could end up in court -- the Supreme Court, in Cousins v. Wigoda, ruled that political parties are entirely private entities and can thus do whatever they want -- but Loomis guesses "that a lot of lawyers on either side are suiting up right now."

There's another delegate quirk, too: None of the pledged delegates so far are in any way legally bound to select the people whom they've promised to represent at the conventions. "The party says that they are 'encouraged' to vote the way they've pledged," says Mayer, but if a candidate goes into the convention with only a slight majority of pledged delegates, he or she couldn't be certain of a win, because some delegates might defect.

And that's not even accounting for the super delegates -- the party honchos who are allowed to vote for whomever they please, and who may well decide the fight if the candidates go into the convention with a very close vote.

According to a campaign document, apparently released unintentionally, Obama's camp is predicting that it will go into the convention with slightly more pledged delegates than Clinton, and about equal support from the super delegates. The rest of the super delegates would thus be able to decide the race -- and because they're members of the Democratic Party establishment, the theory is they'll choose Clinton in the end.

Some talking heads on TV have suggested a way for the Obama campaign to avert this possibility: He could use his lead in pledged delegates to enact convention rules that would essentially invalidate the super delegate vote.

But Mayer is dubious of this theory. A candidate may be able to find a loophole in the rules that would allow for getting rid of the super delegates, but "at least to a certain extent both sides are bound by elementary rules of fairness, and it's difficult for me to believe that Democrats would say, 'We're not going to count these.'"

Mayer adds that he doesn't think the super delegates would go against the popular will. If Obama wins more contests by the time of the convention, "The super delegates aren't going to say, 'Tough, Barack, we're going the other way.'"

But given these complexities, says Loomis, "anyone who starts spinning it at this point looks very foolish. They can slice it and dice it any way they want, but at this point it's dead even."