Make your own candidate

None of the presidential contenders felt like a good fit for my beliefs. So I invented a fantasy candidate -- and it screwed up my election day. 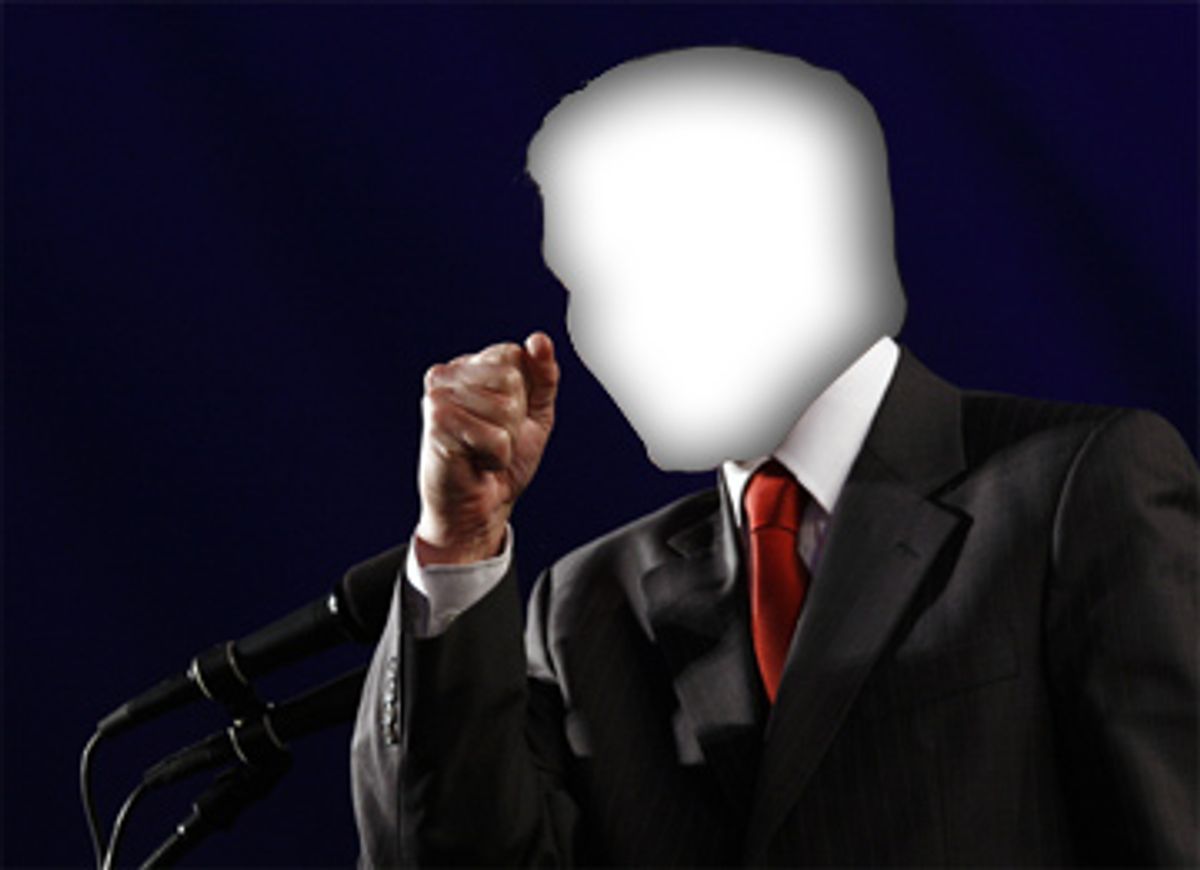 On Super Tuesday, when I pulled that red lever to the right, I still wasn't sure whom I'd vote for. The close race between Hillary Clinton and Barack Obama manifested itself nationally on Super Tuesday, but when I voted it was still swimming around in my head. Their strengths and weaknesses seemed to cancel one another out. Voting for one seemed as important as voting for the other. And frankly, I would've loved to speed up the general election by nine months and pair them on the same ticket, with either one as presidential nominee. Or perhaps as co-presidents -- we very well may need more than one leader to clean up after George W. Bush. I rested my hand above the ballot and waited for a lightning bolt of insight to hit me.

Earlier in the week, SelectSmart's Presidential Candidate Quiz told me that, policywise, Clinton and I were a poor fit. She came in at a disappointing No. 5 out of the candidates I might have chosen. I matched more closely with Dennis Kucinich, at 78 percent, and then with Barack Obama, at 77 percent. This survey gave me a number of headaches, though. First, it included a percentage match without elucidating the candidates' policies, and did not tell me exactly which issues the candidate and I agreed on. Second, the site listed my No. 1 candidate, with whom I matched a perfect 100 percent, as "Theoretical Ideal Candidate."

I imagine that somewhere out there is an American for every politician, someone whose beliefs line up perfectly with the statesman elected. The rest of us try not to think too hard about the fact that we always compromise certain of our principles to get a president elected, and that the available choices usually represent a dilution of our convictions. Having always been much farther left than any president elected in my lifetime, I have never had the luxury of imagining a "Theoretical Ideal Candidate." The survey results stimulated my imagination and made it considerably harder to decide which of the other, imperfect candidates to support.

What makes this process somewhat torturous for me is my minuscule demographic group. Politicians rarely feel the need to pay attention to college-educated, black gays and lesbians as a group, as we don't constitute a particularly powerful voting block, spiritual power notwithstanding. This is what it means to be marginalized -- your issues never rise to the national level, and a huge proportion of your compatriots don't seem to realize that these concerns, or sometimes even you, exist. The last openly gay black man who truly went mainstream was RuPaul, in 1993.

Instead of joining the Clinton/Obama parade, I found myself lost in a thrilling reverie about "Theo I. Candidate." Theo, I fantasized, would run the United States like the Netherlands, or some Scandinavian socialist quasi-utopia -- gay marriage, universal healthcare, decriminalized marijuana, legal abortion, respect for the humanity of immigrants, the exploited, the poor. Heaps of funding for the arts. Theo would lead the United States toward what it might have been had the Dutch been as assertive as the English -- a country that respects its pleasures without abusing them and does not use Christianity as an excuse for injustice, economic or otherwise. He even had a Dutch name.

Yeah, I thought, once I came to my senses. Theo and I could dream all we wanted, but we'd never win the Iowa caucuses.

Of course, I can live with Theo's unelectability -- I will probably have to live with it for the rest of my life, or at least until RuPaul runs for president. But Mr. Candidate suddenly made Obama's and Clinton's vague rhetoric about embracing change seem a lot more superficial. Clearly, the country isn't capable of changing enough to suit my particular leanings. But the idea that one could make history by voting for an "African-American" (who is really biracial) or a woman (whose husband is an ex-president) also faded in significance. That kind of history didn't make a difference to me. Theo Candidate, however, would put the Bush administration in a historical context, and would have no qualms about naming and reversing the damage that corrupt and privatization-hungry neoconservatives have done to the Great Society, the country and the world while stuffing their pockets.

My certainty destabilized, I had done some research before arriving in the voting booth on Tuesday and, of course, discovered that no one even vaguely resembling Theo would be on the ballot. I scoured the New York Times Web page describing the various positions of the candidates, and to my horror, clicking on the descriptions of Clinton or Obama's policies frequently changed the photograph, but not the paragraph. A profile of Mike Gravel amused me, but pure snark does not a Theo make.

Then I discovered the National Gay and Lesbian Task Force's chart listing the candidates' views on gay marriage. None of the front-runners -- not Clinton, not Obama, not John Edwards -- supported marriage, preferring the more politically palatable yet to my mind Jim Crow concept of "civil unions." Support for gay marriage was a lonely field, occupied by just Gravel and Kucinich.

On a personal level, I can live without gay marriage. But those who want it should be able to get it, and it should be called marriage so that no one in an official position of power can ever deny that it is not exactly the same. (Just don't e-mail me pictures of your over-the-top reception, thanks.) The horrendous immigration troubles of several of my friends with partners who are not U.S. citizens came to mind. So though I don't think of it as "my issue," I felt a bit betrayed -- it surprised me that so few Democrats had the courage to articulate what is right about it rather than retreating into a half-measure. Most of them also believe in repealing "Don't ask, don't tell" -- in principle, civil unions are the new "Don't ask, don't tell." It also disappointed me to think that most Democrats still feel the need to appease the center by selling out the fringes. But what else is new?

When I got to the voting booth Tuesday morning, there was no line behind me, and I took a long look at the Democratic side. No one on the ballot resembled Theo Candidate in the slightest. I voted for a smattering of delegates across Clinton/Obama lines to pass the time. But then, as I settled into a kind of civic daze, someone knocked on the side of the voting booth, which frazzled me. I wasn't sure if this person wanted me to hurry up or if one of the officiators had a nervous tic. So, in my own sort of flinch, I voted for Kucinich -- my No. 2 after Theo, who supported gay marriage rather than civil unions.

Instantly I was embarrassed -- what was I doing? He had dropped out of the race almost two weeks ago! Who votes for a sure loser, other than a former campaign staffer in denial? Had I drained votes from a more viable candidate? My friends and parts of my family all seemed to have joined the Cult of Obama in the last week. What would I tell them?

Most of my rationalization for this choice took place after I left the voting booth, feeling like a man with a terrible secret. I told myself that I was not wasting a vote, because if Kucinich could still drum up some support, even 5 percent, that might prevent some of his leftier issues from getting lost in the noise of the center, and this might give the party pause before continuing its rightward drift into the netherworld of Reaganomics. Still, it felt strange that I'd based my vote on gay marriage -- not so much because I believe in the issue itself but because I feel a Democrat should support equality unequivocally, especially if she happens to be female or has some African blood. Kucinich also appealed to me because I hadn't heard much about him, whereas the furor surrounding Clinton and Obama, like the opening weekend of some summer blockbuster, had turned me against the whole promotional machine. Voting for one of them felt too much like surrendering my free will, and doing what I was supposed to rather than what I thought was right.

Not that I did it to defy the system, like some kind of Ralph Nader supporter offering his critique. Despite the hype, this is still only the primary, and I will certainly have the opportunity to "make history" in one way or another come November. Sadly, though, that will never mean casting a winning vote for Theo Candidate.