Why McCain provokes paranoia on the right

Not only does the Arizona senator mock conservative orthodoxy, but, even worse, his pro-immigration think tank took money from George Soros and other frightening liberals. 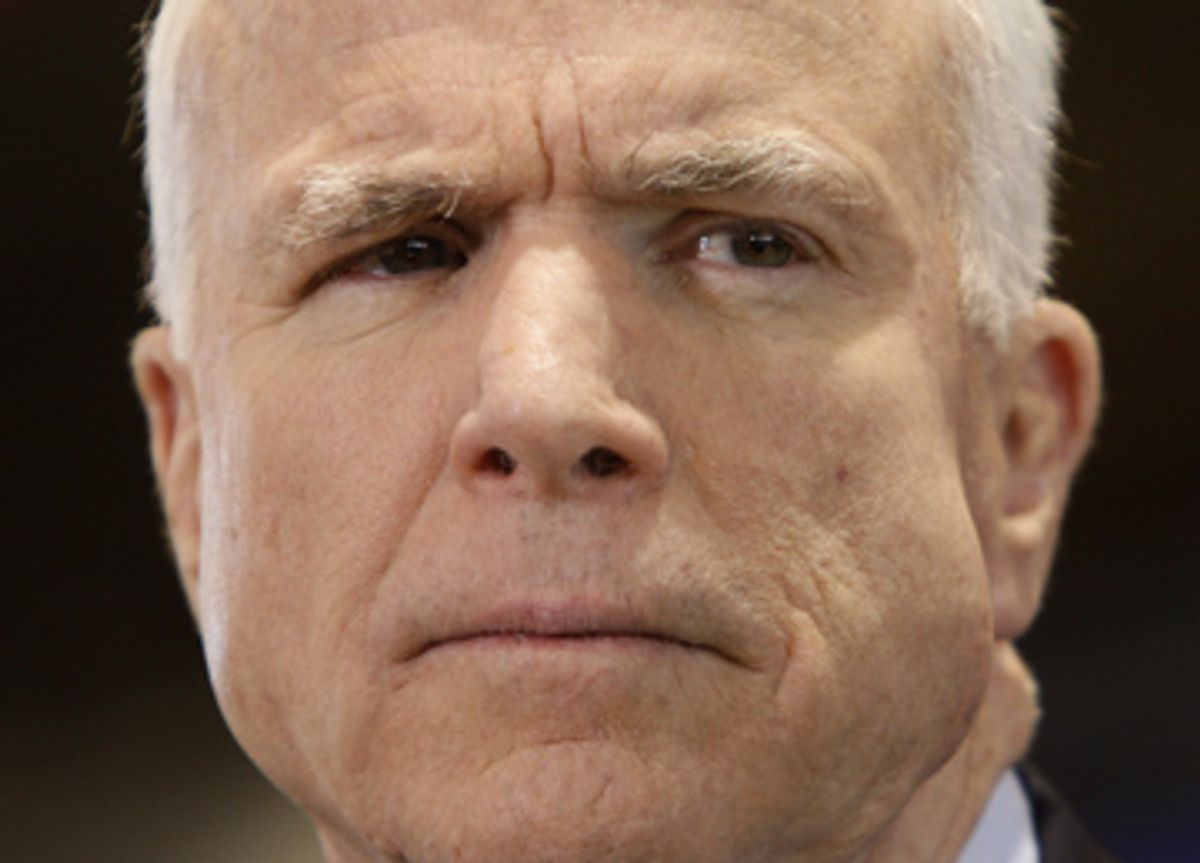 John McCain's gleeful proclamation on Tuesday evening that he is the front-runner for the Republican presidential nomination could only have intensified the despairing rage of his party's far right. For months the zealots have watched helplessly as the Arizona senator, who built his maverick reputation by taunting and tweaking them, clambered back into contention by humbling their would-be champions. Suddenly, the conservative cause found its last hopes reposing in the likes of Mitt Romney, a dubious convert, and Mike Huckabee, a suspect populist.

That desperate situation, which displayed the political disarray of their movement, only got worse for conservatives as McCain moved inexorably closer to victory on Tuesday night. And now they will have to listen to his claim that he is a legitimate heir to Ronald Reagan and decide whether to line up dutifully behind a man they have despised for a decade.

Certainly there will be many elected officials, bureaucrats, officeholders and assorted pork-choppers who will fall into the McCain ranks without much protest, out of personal interest or partisan loyalty. If conservatives could persuade themselves to accept Romney's professions of the true faith despite his record of support for abortion rights and gay rights, then why not believe McCain when he promises supply-side tax cuts?

As Rush Limbaugh, Ann Coulter, James Dobson and their lesser imitators furiously explain, they have strong reasons to distrust "straight talker" McCain, who straddles and shifts incessantly to advance his contrarian political strategy. He has so casually disrespected them and their opinions over the years, showing up routinely on the wrong side of so many of their issues, from climate change to gun control to campaign finance reform to the marriage amendment to the Bush tax cuts to judicial nominations, that endorsing him now would look like a wholesale abandonment of principle.

Moreover, the special interests of the right-wingers' media panjandrums would be much better served by the defeat of a Republican ticket headed by McCain (especially if Huckabee becomes his running mate). In the aftermath they could argue that their party cannot win when the presidential candidate deviates from their dogma. Their profits and status would be depressed by a moderate Republican presidency, but greatly enhanced by a Clinton or an Obama in the White House.

For McCain to reach beyond the right-wing gatekeepers will be difficult, because rank-and-file conservative activists' suspicion of McCain sometimes approaches paranoia. But like most paranoids, they have their evidence, too. Latent anger over his past betrayals was provoked into rage by his sponsorship of immigration reform that permitted a "path to citizenship," better known as amnesty, or shamnesty, on the right. Beyond the issue itself were McCain's alliances, not only with Sen. Edward Kennedy but with a broad coalition of liberal Hispanic and immigrant organizations.

More ominous still, for those of a conspiratorial bent, is the Reform Institute -- the think tank founded by McCain, where senior fellow Juan Hernandez (who once served in the Mexican government) has divided his time between promoting liberal immigration policies and organizing Hispanics for McCain's presidential campaign. As commentators in the right-wing blogosphere have noted with alarm, the Reform Institute has taken hundreds of thousands of dollars from liberal foundations -- most prominently the Open Society Institute, whose founder and chief funder is none other than George Soros. (Here I must disclose that I have worked for magazines that received OSI grants -- and perhaps that also serves to emphasize the point here.)

Aside from supporting the institute's substantive papers and conferences, that Soros money presumably helped to subsidize the high-level McCain campaign staffers and advisors who have turned up on its payroll since its establishment in 2001. Among those staffers are Rick Davis, the McCain 2008 campaign manager; Carla Eudy, a top fundraiser for both the campaign and the institute; and John Raidt, the senator's closest policy advisor since 2000. In 2005, for example, the institute gave Raidt $143,000 in consulting fees to develop policy on climate change and resource stewardship. He is now the policy coordinator for the 2008 campaign.

For McCain's critics on the right, the OSI funding implicates the Arizona senator in all the progressive and libertarian causes that the Soros foundation has supported -- including reproductive rights, drug law and sentencing reform, public financing of elections and abolition of the death penalty, to give a short list. If that sounds like guilt by association, McCarthy style, that kind of thinking is hardly alien to Limbaugh, Coulter and their fans.

So McCain will be working a tough house when he appears before the Conservative Political Action Committee Thursday, seeking to soothe the sore Republicans humiliated by his triumph. They won't be sold on his claim to the Reagan legacy or his recantation of his heresy on tax cuts. But perhaps he will be able to convince them somehow that the dreaded Soros likes Hillary Clinton even more.