How does a single father ever get laid?

I have two kids to raise, a dating scene to navigate, and a rubber vagina in my drawer. Bachelorhood is off to a rough start. 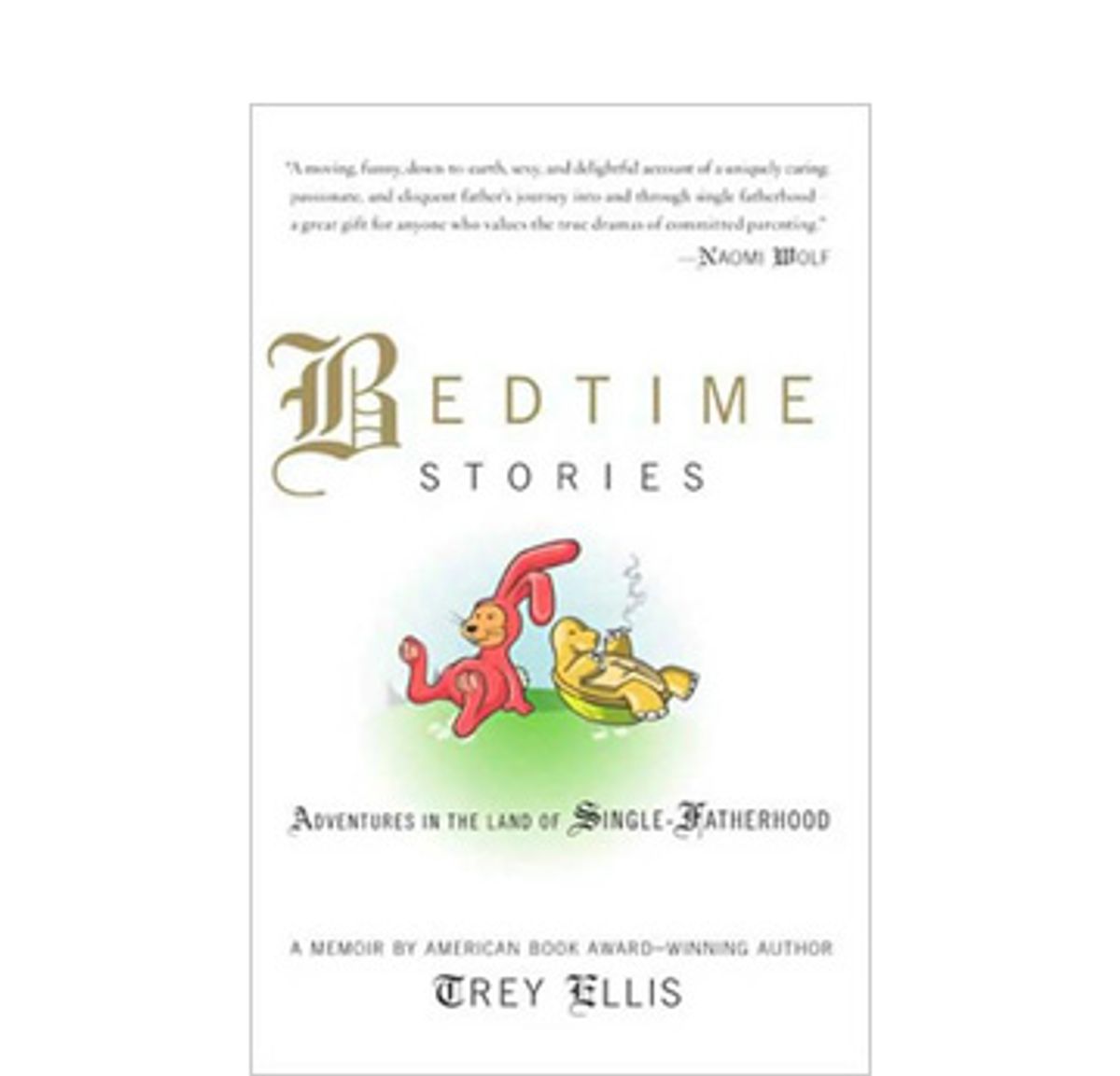 At the end of the day, I was bathing the kids, unloading much of a bottle of conditioner onto Ava's scalp so I could run the padded brush through her hair without making her cry. The explosion on top of her head is her most dramatic feature. When it's clean and out, she looks like a miniature Macy Gray, a mini-supermodel-rock star. She looks like her mother, Carmen. It was usually her mother or our weekday nanny who wrestled with Ava's hair, but I was slowly learning. In attempting a braid, I could only get through a turn or two before the hair rioted, so I'd just seal off the relatively controlled part with a barrette and let the rest poof out like fireworks. Almost always the braid would be high and outside, but Ava was sweet enough not to complain. Instead, while looking at herself in the mirror, she would tilt her head over her shoulder to center the poof and say, It's good, Daddy.

Back when Carmen and I were still together, Ava often asked me why she didn't have straight hair like all her friends. The first time it happened I lifted her up to my height. Carmen and I had dreaded this day. We had read her "Happy to Be Nappy" and "Nappy Hair," but how could that counterbalance being the only brown-skinned person in her preschool? I explained to her, as many times as she needed to hear it, that girls with straight hair pay thousands of dollars to make their hair curly, and girls with curly hair pay thousands to make theirs straight. The trick is to love yourself for the way you are (and spend all that money you save on chocolate).

After the kids were dry, I put them to bed (I think I ended that night with a creaky but oddly soulful rendition of James Taylor's "Sweet Baby James") and went down to my default dinner: a bag or two of the prewashed carrots the nanny always popped into Ava's lunch and a few jagged slabs of supermarket rotisserie chicken. Instead of swiping a couple of juice boxes from my kids, this night I rubbed my hands with glee in anticipation of the treat that awaited me. Tonight I didn't despair that this burnt orange piece of crap refrigerator with the broken plastic shelves and jangly handles was an insult to all of refrigeratordom. I didn't despair because I had bought a six-pack of Pepsi the other day, something I do only a very few times a year because as soon as it's in the house, I end up sucking them all down like crack.

I laid out my bachelor's feast on the table in front of the TV and loaded a DVD of the documentary "Dogtown and Z-Boys." I turned out the lights so it would seem more like the movies, and I'd snuck in food. Just as I pressed play, our new 24-year-old weekend nanny Linda walked in.

"Hel-lo," she said, as if singing a song. "Whatcha watching?"

She dropped to the couch, caving us into each other.

A great excuse for me to rebound off the couch.

It occurred to me that back in '78, when this house was full of promise, the carpet was a recognizable color, and my side-by-side refrigerator was a symbol of status, Linda was just being born.

Linda fidgeted. "You're really into this, aren't you?" She asked.

"I remember watching these guys on TV and then begging my parents for my own skateboard with polyurethane wheels and sealed bearings."

She pushed off from the couch and took all the dishes to the kitchen with her on her way upstairs to the bathroom. A few minutes later, she clattered down the stairs holding her clothes, one towel around her body and another around her hair.

"Good... night?" My voice cracked for maybe the first time in two decades. I winced, but it was too dark in the TV room for her to have seen me.

I stopped the DVD to collect my thoughts. The direction that our nascent relationship was going was leading me straight toward a tawdry, scandal-ridden hell. I had hired her so that I could get out and begin living like the newly single man that I now was. Yes, there were issues. I didn't really drink, hated bars and the last time I'd been on the prowl Phil Collins was topping the charts.

All right, that wasn't completely true. I had gone out once a few months ago, right as Carmen was leaving me. My friend Yule had dragged me to The Brig, our local meat market. It was a Friday night, and when the big, black bouncer eyed my driver's license, I joked that I was almost old enough to be legal two times over. His only response was to tug his huge head toward the door. Inside, as I watched a carpet of twenty- and thirtysomethings shout at each other and spill beer on each other in an attempt to have sex with each other, my stomach convulsed. Out of the hundreds of sweaty yuppie girls in this room, I was positive that not one of them could I ever love. I could have collapsed to the floor in a sobbing heap -- if it hadn't been so crowded that my arms were pinned to my sides.

"I am about to throw up in my mouth."

I turned to shoulder my way back out the front door. A blonde woman, and just about the only woman there my age, blocked my way and wasn't moving. Who knows what she might have looked like if she hadn't been so damn drunk, but as it was, all her facial muscles were so relaxed by alcohol that she looked as if she were melting.

"Excuse me?" My words served two purposes. I didn't understand what she had just said, and I wanted to get around her quickly.

I looked at her more closely this time. Was she just messing with me?

Circling each other, we traded places so I was now nearer the exit.

As the cool and the quiet of the outside hit me, I cackled.

She called me fine! I am knocking on 40 and had never been called fine by anybody, not once in my life. Perhaps she was some sort of drunken angel, come to earth to help me through.

In the first months after Carmen moved out, I of course was too emotionally gutted and too preoccupied with getting Ava to preschool and bribing her to poop in a potty, changing Chet, bathing both of them in the evenings and singing them to sleep at night to think about dating. The Playboy Channel was the closest thing I had to a lover. Satellite TV with benefits. I was fishing for sympathy about my plight with a wild friend when he suggested CyberSkin.

I told him that it sounded like something they should pass out in prisons.

"It will change your life, my friend, and save your wrist."

Though there was a sex shop just minutes away, for weeks I could not bring myself to enter it. Finally, however, I did, and I bought the floppy rubber thing from a woman behind the counter who weighed more than I do. I can't tell you what she looked like, because I pretended to be hypnotized by the dirty floor at my feet. I even feebly tried to disguise my voice when I said thank you and hurriedly scooped up my change. Anything to make it harder for her to recognize me in a lineup if the cops were ever looking to round up the neighborhood perverts, losers and freaks.

As soon as I got home, I buried the thing at the back of my dresser drawer. Now that it was safely secreted inside my home I was actually very excited about our date this evening, after putting the kids to bed.

Then I rushed off to yoga. Two hours later I was driving home singing to myself. A few of the yoginis in class had been especially flirty, maybe soon I wouldn't even need the thing that waited for me at home. And the class itself was an ass-kicker. Every part of me sweated. My eyeballs sweated. For the first time in weeks, my brain was pleasantly stewing in endorphins. I was persevering through what was so far the hardest test in a fairly hard life. I was proud of myself. Each day, I could almost feel the wound inside me closing just a little bit more.

I opened the door to my house and heard Ava and her playdate screaming happily, as Chet chased them. When I came in they all gathered around my knees like sheep. My ex Carmen was in the kitchen, my kitchen, chopping a hill of kale. She insisted that her little studio around the corner, right off the Venice boardwalk, was too tiny for playdates, so I gave her a key to the house my kids and I were renting. In fact, she explained to Ava that she had two homes, ours and hers. Her newest obsession was raw vegan cooking so she was using our kitchen to prepare food (I guess you can't call it cooking) for rich, raw foodies too lazy to chop up their own.

As had happened every time I saw her again ever since the night she left, as soon as our eyes met, my stomach lava lamped and I had to look away or fall over. It was all so fucking hard. How could I pretend she was dead when here she was, in my fucking kitchen five afternoons a week?

I hurried past to take a shower.

"Um. Trey," she began, speaking so quietly that at first I did not hear her. "The girls were playing in your room and they found your thing. I took it from them but..."

On the counter by the sink, far away from the chopped up kale and my soon-to-be-ex wife, lay my new, spongy, pink plastic pussy.

If it were only sharp and pointy instead of springy and soft I could have plunged it into my chest and instantly ended my humiliation.

"The girls were fighting with it," Carmen added helpfully.

A coherent verbal response eluded me. I marched the 40 bucks worth of silicon (or whatever the hell it's made of) out the back door to the trash, then took the back stairs up to my room. To begin our new lives apart Carmen had Doug, her white rasta guru boy. I had been willing to settle for a lousy rubbery cutlet.

Trey Ellis is a novelist, screenwriter, blogger and Assistant Professor at Columbia University. His new memoir is "Bedtime Stories: Adventures in the Land of Single-Fatherhood," from which this is adapted.