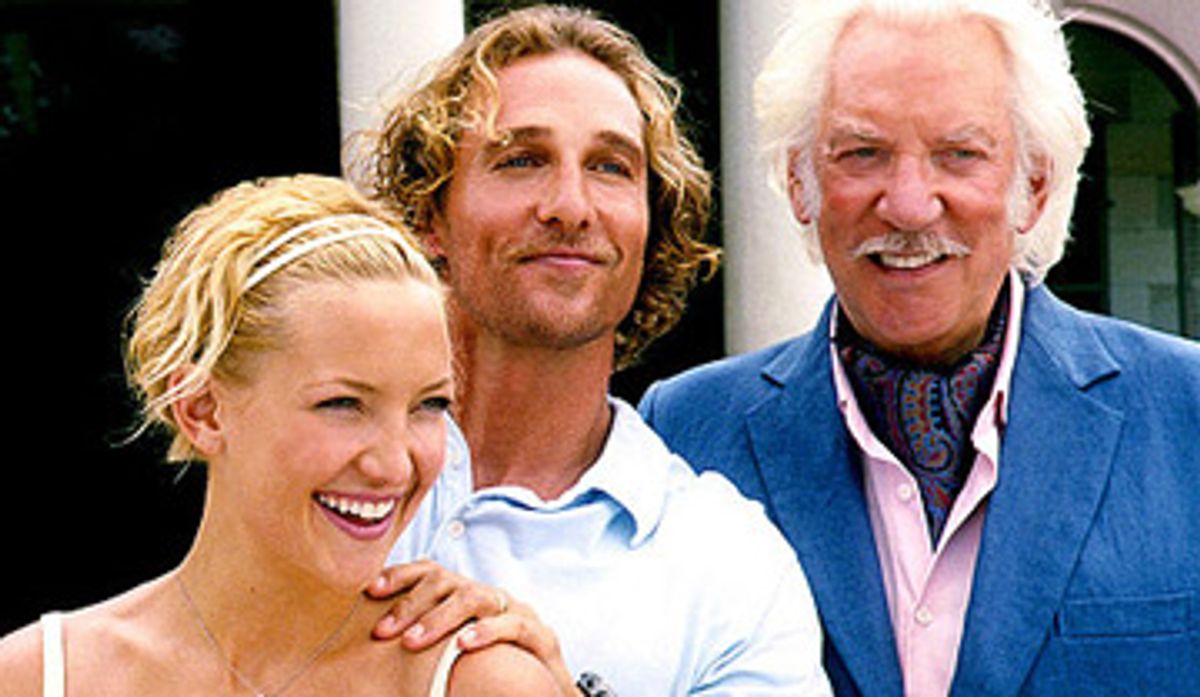 There's room for only one sex symbol in Andy Tennant's romantic adventure "Fool's Gold," and it isn't Matthew McConaughey. McConaughey plays Finn, a modern-day treasure hunter with a propensity for traipsing around Florida without his shirt, the better to show off his gleaming Charles Atlas muscles. He's a good-time guy, the god of Coppertone and brewskis, but somewhat lacking in the responsibility department, which is why his wife, Tess (Kate Hudson), is divorcing him. The two used to hunt treasure together -- the big prize in their sights was a queen's dowry that was lost at sea in the early 18th century -- but now Tess has found a job as a steward on the yacht of an extremely rich gentleman, Nigel Honeycutt (Donald Sutherland). Finn finds his way onto that yacht and, much to the annoyance of his former beloved, persuades Honeycutt to take a crack at locating the treasure.

Naturally, Tess still loves Finn -- if she didn't, you wouldn't have a movie. Then again, you barely have a movie anyway: "Fool's Gold," a semi-adventure and even less of a romantic comedy, only pretends to whip up excitement. Shot by Don Burgess (mostly in and around Queensland, Australia, a stand-in for the Caribbean), the picture is pretty enough to look at, in a travel-brochure way: There are times when the water is virtually the color of sapphires.

But after a while even the unrepentant beauty of the scenery starts to look dull. Director Andy Tennant -- who made the sweet, entertaining Drew Barrymore picture "Ever After," as well as middling entertainments like "Hitch" -- has packed the movie tight with mindless twists, bloated expository dialogue, and many chances for Hudson and McConaughey to twinkle at each other. But "Fool's Gold" loses brain cells with each successive plot development, including some enormously stupid ones involving a greedy, villainous, bad-ass rapper played by Kevin Hart. (The script is by John Claflin, Daniel Zelman and Tennant, from a story by Claflin and Zelman.) The picture moves methodically and slowly when it needs to fly, and the action, when it finally kicks in, is mechanical and forced. Hudson and McConaughey, who made an almost-not-bad pairing in "How to Lose a Guy in 10 Days," try to repeat that mediocre magic here. But Hudson is at a point in her career where she has to do more than just glow: Her timing is good, but she never throws off any crazy sparks -- everything she does is too controlled and a little too cute. And McConaughey, not long ago voted People's Sexiest Man Alive, coasts here. Every time he flashes that million-dollar smile, I get the feeling he'd like to write up a bill for it. This is a guy who gives nothing away for free.

The sexiest guy in "Fool's Gold" isn't McConaughey but Sutherland, who's cast in the supposedly unsexy role of the older, rich yacht owner (he's also a dad, to a pouty celebutante played by Alexis Dziena, who manages to bring some flirtatious wit to her role). Sutherland gives contours to a character who's essentially a stereotype. Nigel Honeycutt is the kind of guy who swathes ascots around his neck and feels secure enough in his masculinity to sport a pocket foulard; he has smooth manners and a wicked smile. But Sutherland doesn't play the character's elegance as a cartoon: He slips into the role as if it were a pair of silk pajamas, and his casual sensuality is so much hotter than McConaughey's slippery pecs. Sutherland is the only actor in "Fool's Gold" who isn't trying too hard, perhaps because he doesn't have to. He's the movie's only treasure, hidden in plain sight.