The blind giant of the Middle East 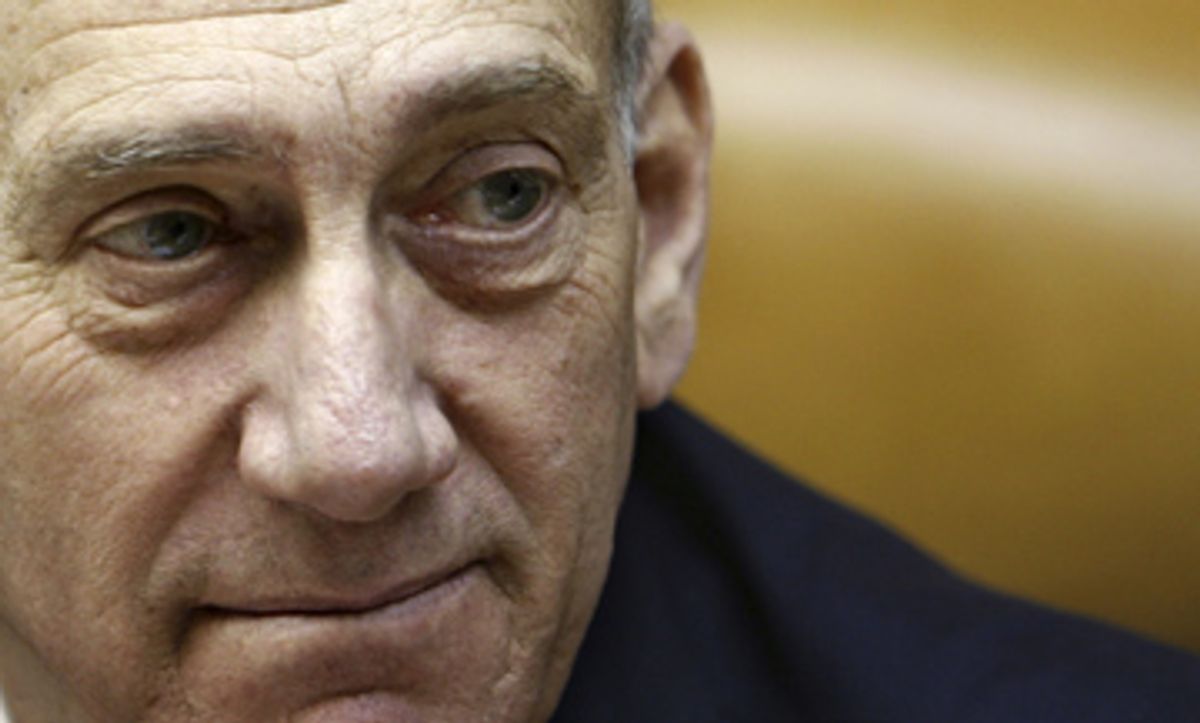 I don't believe the rumor that, after reading the final report of the Winograd Commission, Israeli Prime Minister Ehud Olmert telephoned former Minister of Defense Amir Peretz and declared, "We're off the hook!" But even if Olmert felt some relief, he knows very well that he isn't off the hook, and that the Second Lebanon War will pursue him wherever he goes.

And not only him. The war's casualties have certainly not gotten off the hook. Nor have the other Israeli citizens who spent weeks in bomb shelters, those who did not have shelters, and those who followed on television the state's and the army's inability to protect them. They know in their hearts that we are not off the hook.

We haven't gotten off the hook because we haven't yet really gotten onto it. We have not yet dared to face, open-eyed, this war's deep and frightening significance. Set aside for a moment the convoluted, supremely cautious final report. Go back to the war days. Recall the moments of anxiety, the sense of ever-widening fissures, when it suddenly became clear to each and every one of us that perhaps the army will not always be able to save us, and that there could be a time when a war could end otherwise.

Isn't that what suddenly began to seep through the tightly fastened armor of denial that we Israelis always shut ourselves up in? True, existential fear is an almost constant companion; it is always hovering over us; but perhaps precisely for that reason it is so threatening, and so hard for us to look straight at. Maybe that is why we actually do not dare face it soberly, and why we don't take the necessary measures to counter it. I do not mean just military measures (even there we failed), but also the profound and comprehensive change of consciousness required of all who are truly determined to prevent such a deadly danger.

Israel has immense and impressive capabilities, but what did we see when we looked at ourselves during the war? We saw a powerful hulk groping its way insensibly, lurching hesitantly and clumsily, without any idea of where it was going. We were like a blind giant striking out in all directions, while others much smaller and weaker nipped at his flesh, drawing blood and exhausting him to the point where he might have collapsed at any moment.

The last war put it sharply: More and more it looks as if the things that set Israel going at its birth have lost their potency -- its concept and its daring, its confidence in its purpose and values, its desire to create a country that would not only be a refuge for the Jewish people, but that would also transform Jewish existence into a modern civil state. Now, 60 years after Israel was founded, it must find new substance that will fuel its way forward. Without re-creating itself, it will not be able to stay in motion. Too many things, outside and inside, will hinder it. The time will come when Israel will not have the strength to overcome them.

Countries that have achieved some sort of state of tranquillity, countries that face no threats to their very existence, may perhaps carry on without constantly doing maintenance on their ties to their land, without re-creating those ties in each generation. Israel simply cannot allow itself such latitude. It must struggle endlessly, and not only to keep up its military strength. It must again make itself into a place of meaning and not just a refuge or fortress. Israel must once again become a home. Its inhabitants must feel they belong here not because they have no other choice, but rather because this place speaks to them, quickens them, grants them meaning they can find nowhere else.

Today, Israel is an intolerably opaque place. The public atmosphere is turbid, sometimes horrifically so. This did not, of course, begin with Ehud Olmert, nor during the last war. For many years we, the Israelis, have been sunk in internal strife, to the point that we have lost our ability to see the larger picture and our real interests as a people and a society. Sometimes it looks as if we have also lost a nation's healthy, natural instincts, those that can direct us in setting our priorities and resolving our conflicts, before we lose everything.

Today we have the depressing possibility of witnessing how our destructive "gene," the one we know all too well, is liable to lead us into fratricidal battle. Apparently, after many decades of unrelenting military and diplomatic struggles, of wars and military operations and endless cycles of revenge and retaliation, the suspicion and hostility we have become accustomed to directing at our enemies have become nearly automatic modes of thought and behavior toward everyone else. Toward anyone who is even slightly different -- even if he is not a real enemy, even if he is a member of the family, in the broad sense of that term.

And we have no remaining compassion. Not for ourselves, and even less so for others. We do not take enough mutual responsibility, certainly not to the extent that Israel's fragile existence requires. Sometimes it seems as if we do not have enough respect for the privilege we have been given -- to maintain and preserve a sovereign Jewish state after dozens of generations and thousands of years in which no such state was possible.

So the question we have to ask ourselves today is not whether Ehud Olmert can remain prime minister given that the Winograd Commission has provided him, barely, a way out of resigning. The right question is whether he is the man who can generate the process of recovery from our ills. Is Ehud Olmert, in his conduct, and in the message his leadership conveys to the public, the person who can set Israel right?

Given the public's deep lack of confidence in him, given the impulsivity with which he entered and conducted the war -- and given the many shadows that hung over him even before the war, and which have multiplied since then -- can Olmert correct the navigating errors, the moves that have for years now been sending Israel down the wrong path? Can he lead us back to ourselves?

If the answer were affirmative, we would have to let him go on. We would have to bite our lip and say that the lack of any unambiguous indictment in the report's second installment, along with the immediate dangers facing Israel, require us to carry on under Olmert's leadership. In some sense, that might be a way of embarking on the path to recovery from the wounds left by the recent war -- a recovery that Israel needs like air to breathe.

But Israeli society cannot begin to recover as long as Ehud Olmert is its leader and guide. Discord and heaviness and, to some extent, even a sense of complicity pervade the individual and public consciousness. A thousand lawyers could not obscure the feeling that this entire country has surrendered, out of passivity and apathy, or out of simple utilitarian considerations, to Ehud Olmert's determination to hold on to his job, in contradiction of all the rules of good government and moral judgment. This feeling will not leave us as long as Olmert remains in power. It will have a corrosive and corrupting effect, even on those who were ostensibly unhurt by the war. I fear that this exhaustion, this sense of imprisonment, will prevent Israel's rehabilitation.

What can be done now, in the current situation? No one among the candidates to replace Olmert looks like a leader who can alone generate a healing process, and some of them will only hasten the decline.

But as they scuffle among themselves, or make unseemly alliances, at a time when most of the Israeli public is in a near-catatonic state, anyone who is able to do so should take stock. There are still a many resolute, concerned citizens who share a sense of responsibility and a clear concept of what Israel ought to look like. Even if they are very divided politically, they know very well what they don't want to see here, and what is liable to bring down the house on its inhabitants.

Is there not any way they could unite into an apolitical national emergency force that could mobilize the large number of people who are sick of what is going on here? Those who still remember what we can aspire to, who can still rise above narrow sectorial considerations, because they recognize the danger to the whole? They would have to agree on a few common principles of security, peace, social policy, civil culture and relations between different groups in the country. To do so, they would have to make painful compromises in their positions. They could, for example, form a kind of "shadow government" that would deliberate on weighty questions, free of petty political pressures and intrigues. Such a "shadow government" could propose to the public and the government alternative policies and modes of action, as well as champion a different form of conduct, different public mores. It could be an effective way for spurring the government forward, to return it to its senses each time it is misled by inappropriate considerations or dangerous temptations.

Simplistic? Naive? Maybe. But in our situation, and given the destructive cynicism we have sunk into -- which prevents us from believing in any initiative or chance at all for change -- a little acquired naiveté wouldn't hurt. Other creative and bold ideas could and should be proposed, but we cannot continue to live with such devastation.

I find it hard to accept that Israel is paralyzed in such a vital way. The very creation of such a movement in the vacuum that now fills Israel's public space, the very willingness to fight for something -- the very statement that we are sick of being the victims of such a mediocre and irresolute leadership -- can produce a dynamic process that, perhaps, can rouse the good and animating forces inherent in Israeli society. Maybe this will produce a public shock wave that will gain strength until the country's leaders are forced to listen.

Until then, until that happens, we won't be off the hook.

Born in Jerusalem in 1954, David Grossman is a leading Israeli writer of his generation. He is the author of six internationally acclaimed novels, as well as journalistic accounts, children's books and a play. His work has been translated into 25 languages. He lives with his wife and children in a suburb of Jerusalem.