The cure for lame TV

A return to "St. Elsewhere" evokes a time before Dr. House and McDreamy and the "ER" gang. It's a world worth going back to ... stat. 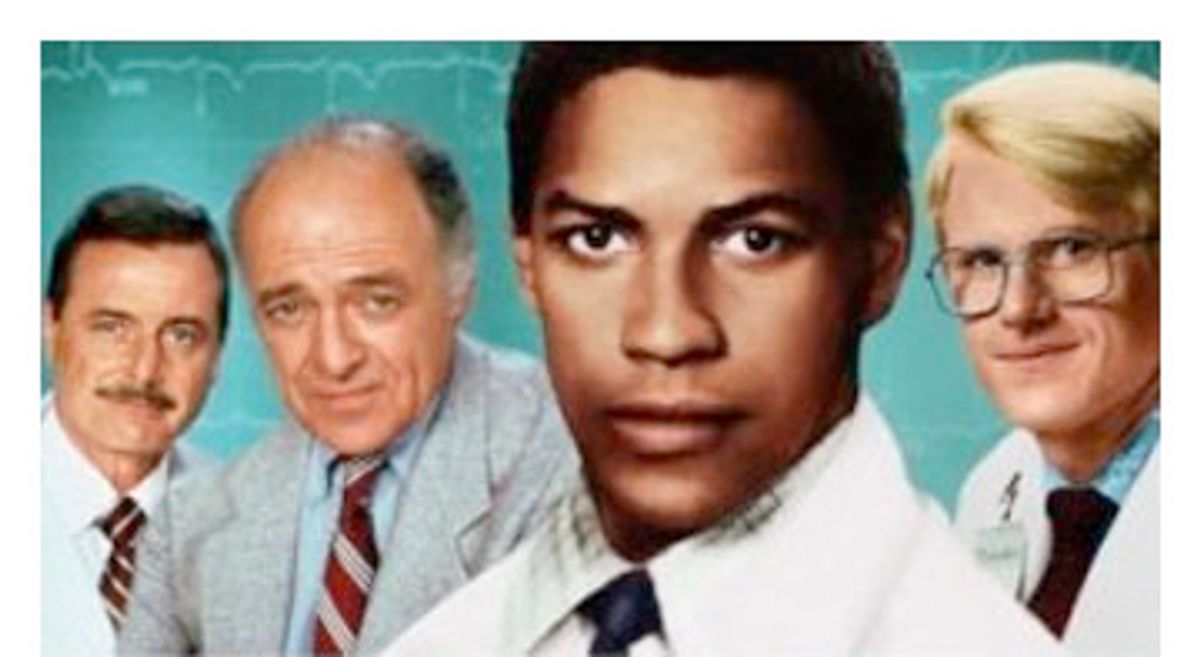 Long before pill-popping medical maverick Dr. Gregory House and his Scooby troop of young diagnosticians burst onto the scene, Sherlock Holmes-ing their way through the world of strange and stranger medical conditions; before the gang at Seattle Grace and McDreamy and McSteamy and George admitted their first patients and before we were all forced to wonder if Dr. Izzie Stevens was ever going to emerge from her post-Denny funk; and even before the mayhem of County General Hospital, there was a little place called "St. Elsewhere."

Cue the synthesizers. Fade the color in. And go.

True, the Writers Guild of America strike -- which may be resolved Tuesday -- may have us all wondering just how long we'll be forced to watch a 6-foot-1-inch, 205-pound spandex-clad blonde named Hellga pummel the lights out of a 20-something gym bunny. But the lack of good hospital drama these past months may just give us the previously overlooked opportunity to go back and rediscover the hospital series that started it all.

For those of us who spent most of the 1980s with our view obstructed by large shoulder pads and teased hair, or on a playground, or, you know, not yet born, "St. Elsewhere," which aired on NBC from 1982 to 1988, serves as the architectural underpinning for "ER," "Grey's Anatomy," "House," "Scrubs" and countless other medical shows. Set in the decrepit wards of St. Eligius Hospital in Boston's inner city, the series follows a group of young medical residents struggling to cope with life and, more often, death, which was a strong departure from medical dramas that preceded it.

The 1950s and 1960s offered a host of M.D.-focused television shows -- 1961's "Ben Casey" or, later, "Marcus Welby, M.D." These shows centered on infallible doctors, whose patients dropped to their knees with gratitude and awe. Like Richard Chamberlain as the young idealistic surgical intern and title character in "Dr. Kildare," these characters were rarely challenged by moral or ethical dilemmas.

"St. Elsewhere's" characters are unapologetically flawed and conflicted. The show weaves together elaborate webs of plot and subplot. The first season, the only one currently available on DVD, gives us episodes involving a sex change operation, the outbreak of a rare disease, a case of Munchausen syndrome, and a pregnant woman who threatens to open fire on whoever performed her husband's vasectomy.

Later seasons delved even deeper, into issues of rape, gang violence, dysfunctional work/family relationships, racial tensions, suicide and drug problems. "St. Elsewhere" was one of the first TV shows to tackle the subject of AIDS -- in Season 2 a local city councilman is diagnosed with the disease. Later in the series, Dr. Jack Morrison (played by a young David Morse, whose recent guest appearance on Fox's "House" earned him an Emmy nod) is raped while volunteering at prison.

Where "ER" turns on gut-wrenching scenarios and a fast-paced environment and "Grey's" sex lives play as prominent a role as the medical drama, "St. Elsewhere" struck a harmonic chord between beautifully orchestrated surgical procedures and the candid human side of the hospital's staff. The show gave us a hospital of chaos and tragedy, where doctors don't always do right and patients don't always survive.

In its six-season run "St. Elsewhere" was nominated for 63 Emmy Awards, winning 13 awards. While the show never garnered huge ratings, peaking at 49th place on the yearly Nielsen report, a devoted audience provided the show with enough support to last its 137 episodes.

Yes, at times the show feels dated -- even if you do ignore Dr. Wayne Fiscus' (a Jheri-curled Howie Mandel) skinny ties or novice surgeon Dr. Victor Ehrlich's (Ed Begley Jr.) thick-framed glasses and day-glo Hawaiian print shirts. Dialogue at times can feel overcharged and camera angles obtuse, lacking the subtle finesse of "St. Elsewhere's" modern counterparts. See Season 1, Episode 2, "Bypass": The camera pans to Dr. Craig's loafers and up to his stern face. The doctor marches into the room of an overweight, middle-aged man and says, "Your father died of a heart attack when he was 42 ... You're walking a thin line, but I am going to save you. That's right. [Exaggerated nod] Triple bypass."

But while certain fashion statements, racial stereotypes and medical scenarios seem passé, the complex and overlapping plotlines, smart writing and character development render the series as compelling and relevant now as it was in its mid-'80s heyday, right down to Fiscus' lunchtime discussion of why prepubescent girls are developing the bodies of Sophia Loren. (It's the estrogen hormones in the fast-food hamburgers!)

Plus, let's be honest, there are few things that can top a pre-blockbuster Denzel Washington playing an introspective Dr. Phillip Chandler who probes an amnesic patient. Well, maybe a young Tim Robbins as a bank bomber, dark lesions across his face, in a hospital gown with his right foot cuffed to a gurney, chain-smoking while telling nurse Helen Rosenthal (Christina Pickles) that the food stinks. Actually, maybe Christopher Guest as an ill-tempered hospital administrator in a three-piece suit.

So even though the 14th and possibly last season of "ER" is still on hold and we're waiting to see what happens when Joshua Jackson finally makes his planned guest appearance this season on "Grey's Anatomy," the silver lining may just lie in the shows of our past. And while Fox 20th Century Entertainment representatives say they have yet to slate a DVD release for any of "St. Elsewhere's" later seasons -- meaning that we'll all have to wait to revisit the "Snow Globe" series finale where it is revealed (20-year-old spoiler alert!) that the entire show was the fantasy of Dr. Westphall's (Ed Flanders) autistic son, Tommy, Season 1 may just renew your faith in good television.

Erin Renzas is an editorial fellow at Salon.