A mistake that should last a lifetime

Removable tattoo ink makes it easy to erase romantic failings and youthful indiscretions. Why would I want to do that? 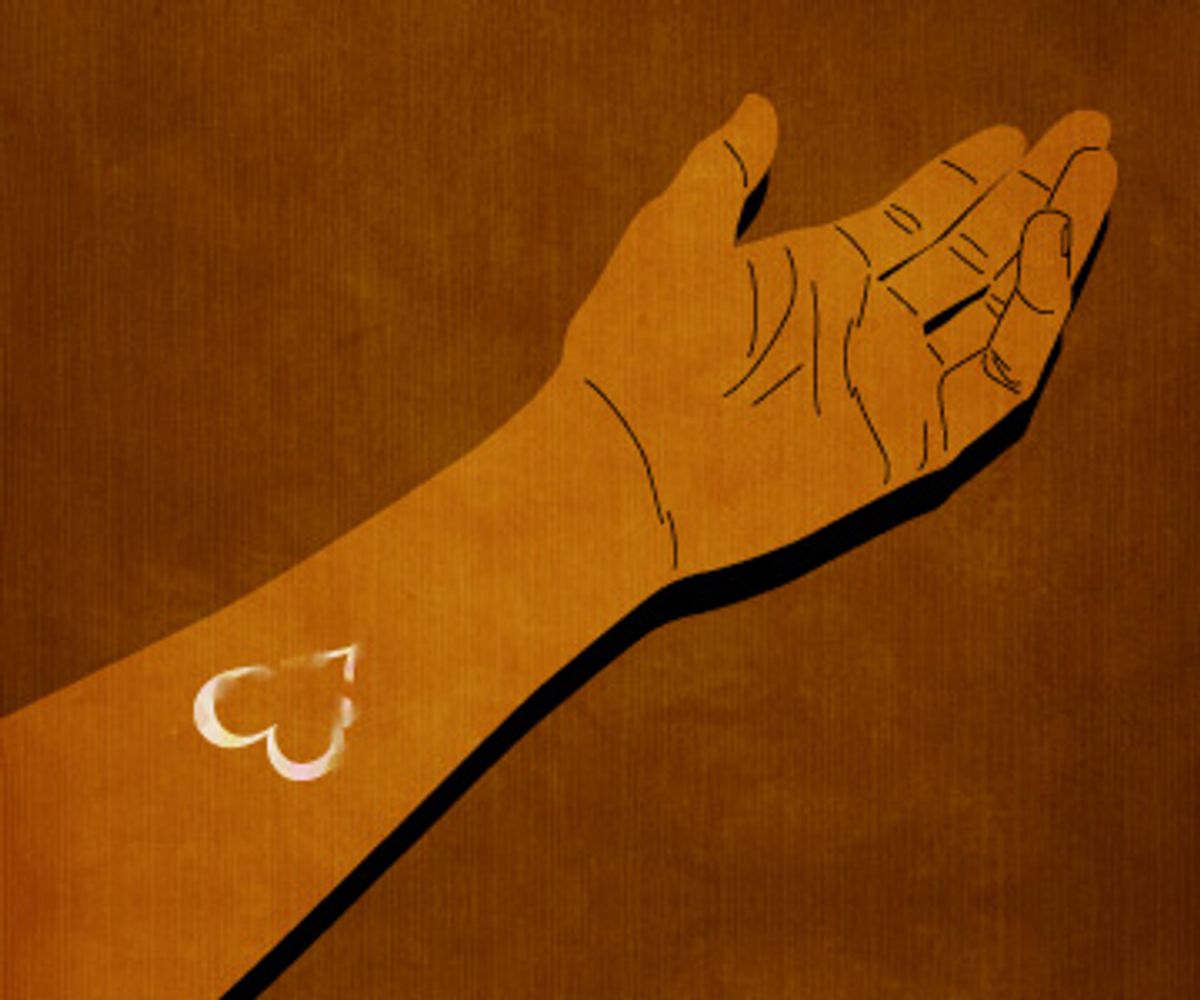 This Valentine's Day, thanks to the advent of removable tattoo ink, couples can inscribe each other's names into their skin without that nagging fear of "forever." It's practical but unromantic, the fringe culture equivalent of a prenup.

If only I'd put off my quarter-life crisis until this year, maybe I wouldn't be living with my own flawed tattoo: blurry, bumpy with scar tissue, haloed with a permanent blue bruise. I've spent the past few years learning to love it -- not an easy task for someone who color-codes her e-mail, alphabetizes her bookshelves and tweezes compulsively. But as I read about removable tattoo ink recently, flipping through Time's "Best Inventions of 2007," I realized I'm not sorry my ink is permanent. I may have a messed-up tattoo, but I have no regrets.

It was a cold April afternoon when I walked into a random Lower East Side tattoo shop and rolled up my sleeve. I showed the artist where I'd inscribed, in felt tip pen on the inside of my left wrist, the phrase "break to keep fixing" -- a lyric by the seminal '90s punk band Jawbreaker. The artist swabbed the marker from my skin and had me rewrite the phrase with an aqua Sharpie. By then I'd written it dozens of times, trying to get it just right. This time, the one that mattered, I scrawled it nervously and told him I was ready. He sat me in a dingy basement, pulled out tools I could only hope had been properly sterilized and popped in a metal CD at full volume. It was over before the first song was.

Back in my Brooklyn kitchen I removed the bandage and rinsed my wrist with antibacterial soap. I realized then that my words, true to my handwriting, began in neatly printed letters and morphed by the end into script. Spooked that I hadn't noticed this until it was too late, I read that four-word phrase for a solid hour, waiting for a spelling error to materialize. None did, and I bravely reassured myself that this quirk just made it more "me." But the permanence of the act I'd committed was sinking in: This time, it couldn't simply be wiped away and written again.

Of course, fear of regret was the reason I'd waited until I was 25 to get my first tattoo. Fear of regret is, in fact, arguably the biggest modern risk of the popular practice, and a technology that erases it from the equation is likely to be a profitable one. Named with marketing in mind, Freedom-2 ink, which hit the market in several cities in late 2007, is made from biodegradable dye encapsulated in tiny plastic pellets. A tattoo done with it is just like an ordinary tattoo except that it comes with an emergency exit -- just break glass in case of change of heart. After a single laser treatment, the plastic dissolves, the ink is absorbed into the body and the design vanishes.

In contrast to the painful, costly and variously effective multiple laser treatments required to remove traditional ink, it sounds like a miracle -- and perhaps a frustration for the 17 percent of already tattooed Americans who say they'd undo theirs if they could. Angelina Jolie may have the means to continually rework her body art, but most of us don't. We'll be living out our years with the histories of our youthful indiscretions and failed romances written on our skin.

My own indiscretion wasn't impulsive. I'd stewed over the idea for years. I'm a textbook Virgo -- overanalytical to the point of being indecisive, and indecisive to the point of becoming impatient. I'd shaved my head with just a month to go before my high school valedictory speech in my tiny New England town because it was on my list of things to do as a teenager. So, too, with my first real office job and the sense that I was being absorbed into the anonymous Manhattan professional class, I felt like my dissipating youth would be wasted if I never got around to getting a tattoo. Or maybe I thought that a little act of adolescent rebellion would buy me a few more years before I had to really grow up.

Either way, I awoke that spring morning with an emotional itch so strong, I got out of work, looked up the address of the tattoo shop online and hopped on the train to the city. I'd been in New York for half a year and I felt like I was hatching, crawling from the crumbles of one life toward a new one. As they had in disparate times of heartbreak, depression and angst, the lyrics spoke to me: "This is the cure/ same as the symptom/ simple and pure/ break to keep fixing." I looked to them, now quite literally, to guide my course of action. They explained me to myself. They even explain, on some level, what happened next.

I picked the scab.

It was a nasty one. My friendly anonymous artist apparently dug a little too deep with the needle. Crusted over, the ink began to bleed, and the letters blurred. At some point I accidentally banged my wrist against the kitchen counter, loosening the scab prematurely. "Don't touch it!" everyone said, but I couldn't help myself. I ran my fingers over it compulsively as it peeled and flaked. I knew better, of course. But, like many things I encountered, I just couldn't leave it alone. An ink-stained piece of skin bearing the letter "T" came off completely. I blew it off my fingertip as if it were an eyelash.

The way I felt about it changed from moment to moment, long after it was finally healed. Sometimes it looked puffy and frayed, and my stomach would sink. I'd have this on me for the rest of my life. At my wedding. In my coffin. I'd forever be explaining it: What it meant, why it looked the way it looked. I'd be enduring the scoffs of my younger, heavily tattooed brother and the unconvincing reassurances of my best friends. I sometimes found myself eyeing the laser removal ads on the subway, considering the damage I could do to my credit.

At other times it looked almost perfect. In the shower, against my translucent skin and veins warmed by the water, it was solid and clean. I liked the jagged arc it formed from a distance, the way you had to be up close to read it, as if it were a private note to self. It's more appropriately symbolic than any other tattoo could be for me; it's something I created that has taken on a life outside my control. What it symbolizes is important enough to me that I was willing to risk wearing it forever. If it wasn't permanent, what would it be? Just painful jewelry. A commodity.

It's still a commodity of a sort, of course. I paid for it -- $60, including tip. But it's more than jewelry. I got butterflies in my stomach the time a boy ran his fingers over it and told me he liked it because it felt like Braille. It's me: flesh and ink. And like my astigmatism, cellulite and other scars, there's nothing much to do besides live with it. It may seem like forever, but tattoos, even the soon to be old-fashioned permanent ones, only last as long as we do. They're an extension of the body, that notoriously imperfect but incredibly functional machine. Mine is a body that steeps in indecision and then acts rashly, doesn't know how to feel comfortable feeling comfortable and can't resist picking a scab. But at least I can live with the scars.