His presidential hopes depend on a perception of "victory" in Iraq. If things turn worse by summer with fewer U.S. troops, will he still argue for more of the same? 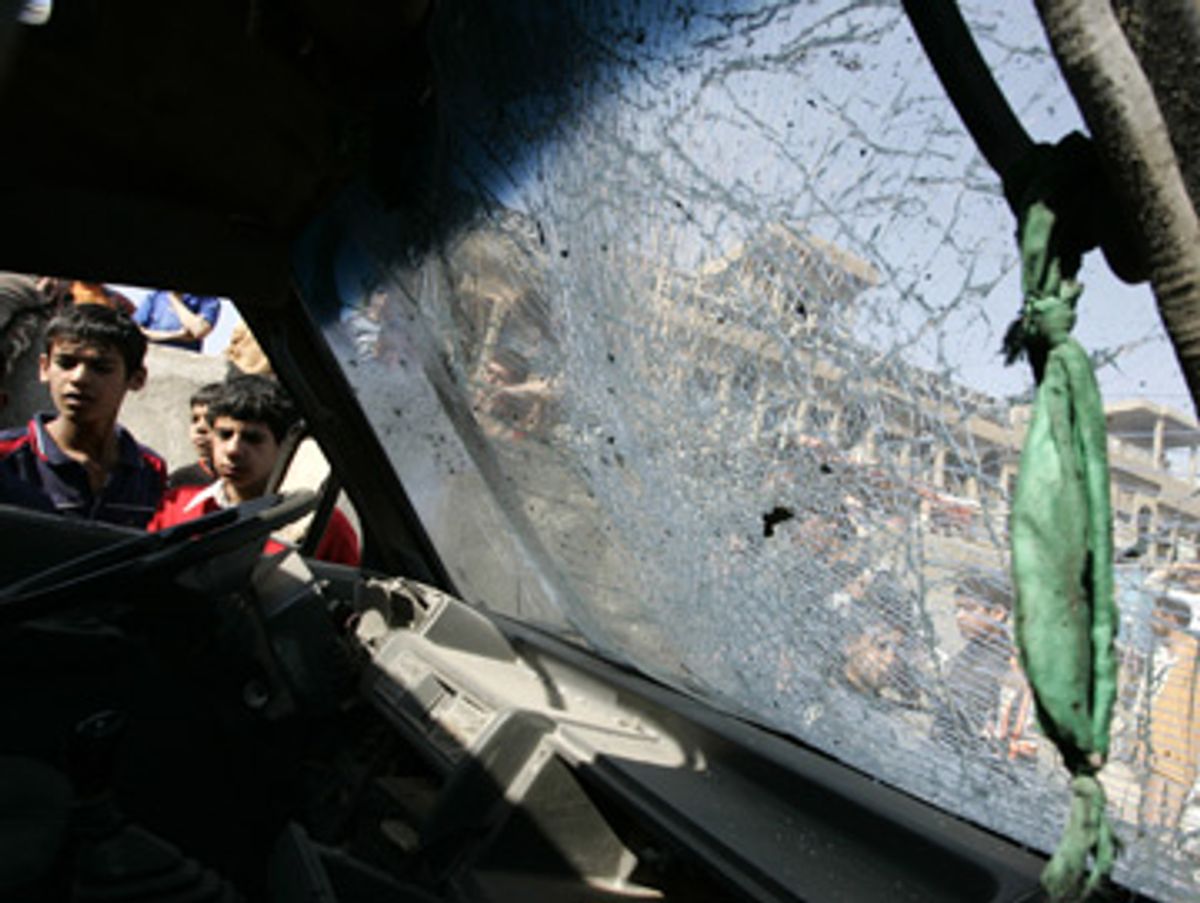 One year after the first deployments of the American troop escalation in February 2007, proponents of the Iraq war have unanimously proclaimed "the surge" a smashing success. "We are winning," they proclaim on the editorial pages of the Wall Street Journal, the Weekly Standard and the New York Post (as well as in periodicals not owned by Rupert Murdoch).

Nearly everyone culpable in creating and prolonging this disastrous intervention describes the latest perceived success as a triumph over the forces of disorder and terror -- and none more than Sen. John McCain, whose presidential aspirations may well depend on perception of progress toward "victory."

The impulsive gloating of McCain and his fellow hawks is premature but understandable. Reporters and statistical analysts both believe that local violence has diminished markedly in Iraq since last fall, thanks to the additional troops as well as shifts in U.S. strategy against insurgent forces. Although the number of American casualties per week in 2007 was about the same as in 2006 (and worse than 2005) that number declined toward the end of the year, along with the number of civilian casualties, bombings and death squad killings. The result was to soften opposition to the war among independent and Republican voters -- and to revitalize McCain's candidacy.

Yet as Secretary of Defense Robert Gates has noted more than once, those improvements are fragile and may disappear with the "reverse surge" of U.S. troops rotating out without replacements. When he made his last visit to Baghdad two weeks ago, market and roadside bombings intensified, with bloody attacks in towns around the capital and dozens of Iraqis killed. Both American and civilian casualties appeared to be trending slowly upward again in January and February, according to data compiled by Iraq Body Count.

If casualties return to their previous levels the American people will demand, as McCain himself has observed, that the troops come home; if they continue to fall, then he can still talk about 100 years of occupation. So far, the pronouncements of U.S. commanders and diplomats in the field lack the triumphal tone of the politicians and commentators at home. There is still no end in sight.

According to the present schedule, American forces are supposed to be drawn down by next summer to the same strength they were at in 2006 -- primarily because there are no more troops to deploy -- and there is a strong likelihood that the levels of violence will rise. Little or no progress has been achieved in reducing tensions among Shiite, Sunni and Kurdish communities, which have been increasingly segregated by the Iraqi version of ethnic cleansing and are increasingly dominated by sectarian militias that do not necessarily answer to the feeble government in Baghdad. Many Iraqis fear that those armed groups simply await the withdrawal of American forces to resume a civil war that only seems to have paused, without resolution.

Without explicitly citing the prospect of worsening violence, Gates and Gen. David Petraeus, the chief commander in Iraq, have quietly abandoned the scheduled withdrawal of U.S. troops for the coming year. Both officials say that withdrawals will cease for a period of "consolidation and evaluation," although neither will say how long that will take.

By July, the U.S. troop presence will return to the pre-surge strength of approximately 130,000 -- and remain there indefinitely somehow, until either this president or the next one decides how to cope with the damage the war is wreaking on the armed forces, the federal budget and the international prestige of the United States.

In political terms, this means that the war will have reverted to the status quo of early 2007 during the party nominating conventions next summer, and will remain there when the general election season begins after Labor Day. That was not what the Bush White House anticipated when it first announced the schedule of troop withdrawals for 2008 -- coinciding happily with the election calendar and improving the dim chances of a Republican presidential victory in a country that has seriously soured on the war.

The surge had changed public perceptions of the war enough to bolster McCain and dampen antiwar sentiment, but now the price of that strategy is coming due. We cannot bring more troops home without risking a renewed conflagration because the Iraqi government has done so little with the "breathing space" bought by American lives and treasure.

Has the surge succeeded? That is what McCain says everywhere he goes, but by next summer he may have to explain why the American occupation has returned to the status quo of 2006, as if the surge had never occurred. He will have to tell us why we should not seek a way out of Iraq -- and why, after losing more than 4,000 American lives and spending a trillion dollars, he insists that our best choice is more of the same.