Once upon a time there were film and TV writers who were getting screwed over by the suits. Thanks to the outcome of the WGA strike, those days are over. 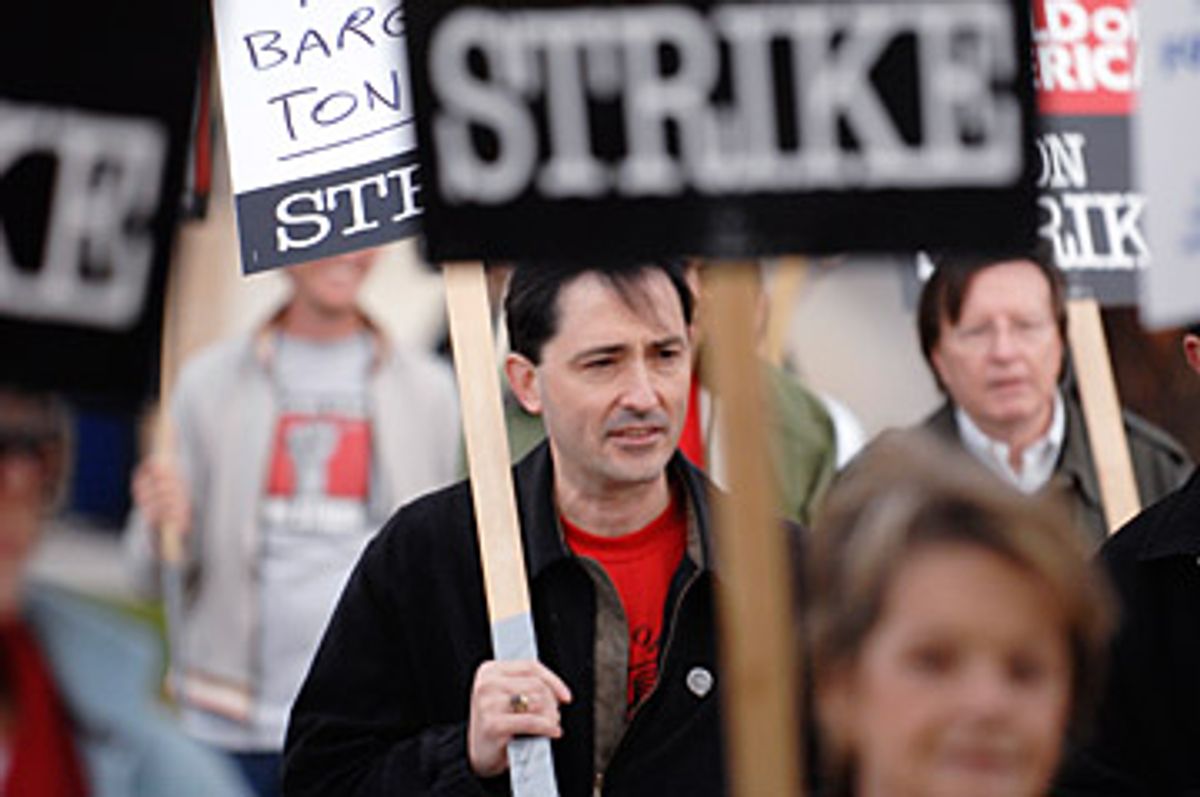 If history is written by the winners, let me gloat. I'm one of 10,000-plus members of the Writers Guild of America, and we're about to ratify a new three-year contract that was concluded last week. We're an odd union, the WGA, composed of rich uncles and poor cousins, the uncles being the A-list screenwriters and TV show-runners, the cousins folks scraping by writing for low-budget reality shows and soaps, and it takes a significant issue to weld us together. When our contract came up for renewal in July, for the first time in decades, we had one -- everybody wanted contract language that would give us a cut of revenue when our work is broadcast on the brave new media world of the Internet. We got what we wanted.

To win, it took going on strike for 100 days. (You saw the photos: writers carrying picket signs, slouching toward Bethlehem, not a pretty sight.) It took silencing naysayers who swore our union would never hold together. It took proving that our elected leaders weren't delusional or satanic. It took prodding the Directors Guild into demanding more for its new contract than it had ever thought it wanted. It took dragging the entertainment industry, all those who work within it, and all its CEOs and honchos, sometimes by the hand, sometimes by the nose, into conceiving a new financial paradigm for the digital age. It's our most successful contract in 30 years. It's arguably the most successful national labor action of the decade.

At least as compelling as the contract's clauses (at least for those of us in the narrative business) is where the walkout of 2007-08 stands in the Guild's long and fractious history, what might be called the strike's folkloric side. The WGA's legend is filled with ghosts, and for this strike to succeed, one of them had to be exorcised.

The Guild's been up and down in its 60-odd years. As I outline in my recently published screenwriting history, "What Happens Next: A History of American Screenwriting" (Harmony Press), the Guild was formed in the labor-friendly, radical '30s, as much an attempt to secure respect and recognition for Hollywood writers as an organization to establish minimum wages, but it barely obtained its first industry-wide contract in 1941 after eight years of studio stonewalling, vicious threats, and finally the intervention of the Labor Department. Bold in the '40s, the WGA turned supine in the '50s, bowing to the loyalty oaths and the Blacklist that scourged the industry of many of its finest talents, most of them screenwriters. A long, heroic strike in the early '60s revived Guild fortunes, securing residuals, the small payments for reuse of our material that tides us over between jobs, but in the 1980s, sad to say, the Guild was beaten to a pulp. Strikes in 1985 and 1988 over the New Media of its day, payments for reuse on VHS tapes and later DVDs, collapsed in failure, especially in 1988 when an active and organized insurgency fractionalized the union and left its morale in shreds. For the next 20 years, the membership took whatever handouts it could get when its contracts came up, never striking, never having the guts even to threaten one. This ghost, two decades of weakness and division, hovered over the negotiations that began last July.

Any legend needs a villain, and one was conveniently at hand: J. Nicholas Counter III, the president of the Alliance of Motion Picture and Television Producers, the organization that negotiates labor contracts for more than 80 industry guilds and unions for the networks, the studios and the six multinational conglomerates that own them. Nick Counter, in WGA lore, had stolen billions in home video residuals from writers' pockets with some sea-lawyer legerdemain back in the '80s ("these damn cassettes cost so much to make, cut us a break, take a percentage of a penny now and if we ever make any money on the things, we'll talk it over again"). The WGA had taken him at his word, but there was no next time, not ever. Guild folklore envisioned Old Nick rubbing his purple hands, his laughter echoing down the walls of his stony underground cave. Hoodwinking writers had been Counter's earliest victory after taking over the AMPTP in the early '80s -- now about to retire, blocking the Guild from its piece of the Internet pie would bookend his successful career.

But a fresh wind had ventilated the Guild over the last few years. A new president, Patric Verrone, had taken office with a slate of board officers pledged to reinvigorate the Guild, restore its backbone, negotiate from strength, and if it came to it, go on strike. Verrone and a new executive director, David Young, reconstituted the Guild from the bottom up, house meeting by house meeting, reaching out in every direction and pulling everybody toward a unified center, arguing that the upcoming 2007 negotiations -- particularly jurisdiction on the Internet -- would be a turning point in Hollywood history, that New Media was an issue that aligned all the industry unions, especially the rival talent unions, the Directors Guild and the Screen Actors Guild. Verrone and Young's efforts bore fruit -- many of the Guild survivors from the '80s had moved on and the membership was filled with new troops, feisty, receptive and, most important, unbloodied.

These changes went unnoticed by the AMPTP. Counter and his staff of network and studio lawyers opened negotiations in July by offering the Guild two options, to renew its old contract with no improvement and fund a three-year study to see if there was any money in this silly Internet thing (and if it turned out there was, the studio and networks would keep it all), or to throw out the contract's old residual language and replace it with a system based on Alliance members' telling the writers if and when there was any profit on what they wrote (as an example, "Shakespeare in Love," which I worked on, earned $300 million worldwide for Miramax and Universal -- when I ask Miramax and Universal, it has yet to turn a profit). In other words, two steaming lumps of coal.

It was a colossal blunder. The AMPTP had unwittingly pushed the Guild's collective hot button, the lingering ghost of the '80s. The membership was galvanized -- the legends of past writers who'd sacrificed for present benefits were dusted off. The Alliance had handed the Guild exactly what it needed, a battle cry that would pull it together: "We won't get screwed again."

By the end of October, the lumps had been withdrawn, but not replaced with anything substantial. The Alliance didn't want to deal with the writers at all, preferring to wait until the end of the year, when talks could begin with the DGA, a traditionally more tractable group. The town assumed the writers would keep working after their contract expired on Oct. 31 and wait eight months to strike until the Screen Actors Guild's contract expired in June 2008.

But the Guild's back was up -- it voted to strike Nov. 1 and thousands of well-organized picketers hit the streets. That was the first surprise, a militant WGA -- and a flurry of them followed. For the first time in Hollywood history, SAG backed the writers with their feet, actors refusing to cross picket lines, with prominent stars like Tom Hanks and George Clooney publicly arguing the writers deserved what they wanted. The Alliance pursued a divide-and-conquer strategy, blackening Verrone and Young in their press releases as "upstarts," "outsiders," but the slanders never gained traction. There were factions within the Guild, mistrustful of the leadership, desperate to get back to work, and while they threatened division in e-mails and phone calls, they held themselves back from going public and splitting the Guild. Miraculous to say, even the general public, usually yawning at Hollywood labor issues, backed the writers by 60 percent, according to a November poll. There was a sense that the writers had caught a lucky tailwind courtesy of a Republican administration that had condoned the dissolution of corporate pension funds and the elimination of health plans -- in some loopy way, the writers were seen as taking on Enron. But the Guild's greatest good fortune was having a bottom line that could be expressed in simple language, patently fair and easily understood -- if and when the studios and networks made money off the Internet, the writers would make money too.

Desultory negotiations occupied November; in December, talks collapsed, and Counter and crew turned to the DGA. In the high school of Hollywood, the directors are the big men on campus -- their contracts always go down easy; outside of a five-minute misunderstanding back in the day, they've never gone on strike. But 2007 was new ground and the DGA dragged its heels, postponing its turn into January of this year. The directors had commissioned a study on future Internet earnings that concluded that revenues would be small and take years to appear -- they in fact were prepared to ask for little, but the presence of the WGA, with its industry and public support, peering over their shoulders changed all that. The directors' contract was announced on Jan. 17. Happily, it contained Internet jurisdiction and fixed residual fees for directors when their shows were streamed.

The deal had come about through a change in negotiating format. Instead of facing Counter et al. across the table, the DGA brass had gone around them and sat down for informal talks with the men who hired them, with Peter Chernin of Fox and Bob Iger of Disney. Deal points had been hammered out, then brought to the Alliance for conversion into contract language. Felt but only whispered about town was the sense that the AMPTP had been the problem all along, that it had been inflexible in the face of a changing industry. The format's success brought the same CEOs into informal talks with Young and Verrone the following week.

Much of Hollywood thought it was time for the WGA to cut its losses. The strike was taking its toll: not only writers going broke, but networks' ratings sinking, advertisers demanding their money back, the loss of a television season, viewers drifting away, and with the threat of a SAG strike in June, features shutting down as early as March. The Golden Globes, seen as slightly cheesy but a great party, had been canceled, and the Oscars themselves were threatened. But the writers remained unsatisfied with the flat fees of the DGA deal. Those were buyouts, not participation -- the Guild negotiators, sensing their point of maximum leverage, held out for a percentage, something that grew when revenue grew.

Two weeks ago, they obtained it. Writers carped at some of the provisions, but reading the final contract, most were relieved -- the strike had been worth it. Long-standing legends of the WGA had been revived, the sacrifices of past members had been renewed, the ghosts of the '80s had been vanquished. Yesterday, Guild members voted overwhelmingly to lift the strike -- contract ratification is expected within a couple of weeks. It's all over.

Oh, and Guild folklore will record that Nick Counter never got his bookend.

Marc Norman won an Academy Award for the screenplay of "Shakespeare in Love" (shared with Tom Stoppard) in 1999. His "What Happens Next: A History of American Screenwriting" was published last fall by Harmony and reviewed by Salon here.