Too great to be good

Does Daniel Day-Lewis' overwrought, Oscar-nominated turn in "There Will Be Blood" prove he's too taken with himself to surrender to a role? 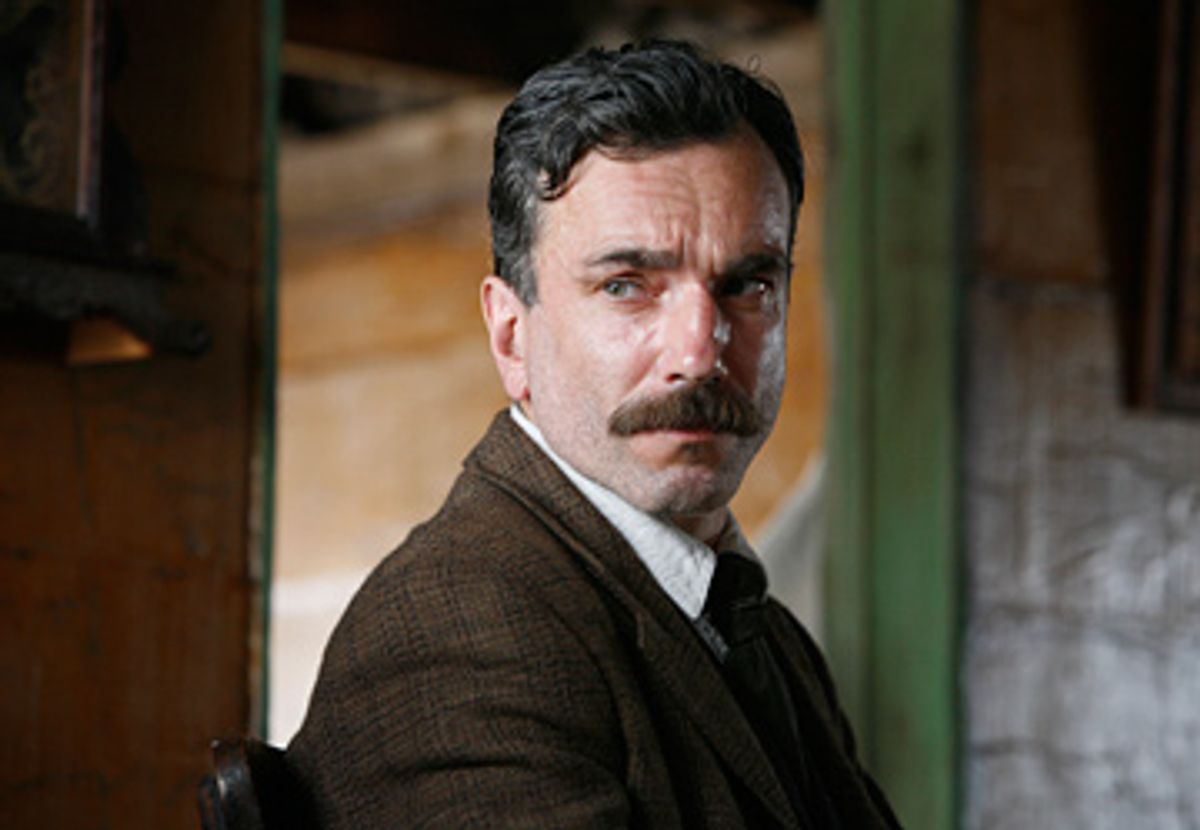 In Paul Thomas Anderson's "There Will Be Blood," Daniel Day-Lewis plays Daniel Plainview, an oil magnate and single father whose drive to succeed is surpassed only by his bitter desire for everyone else to fail. At one point Plainview utters the telling line "There are times when I look at people and I see nothing worth liking," and we're supposed to feel a chill: This is a man so isolated from his fellow human beings that he's unable to take even a splinter of pleasure in their company.

But in playing Daniel Plainview, Day-Lewis doesn't so much give a performance as offer a character design, an all-American totem painstakingly whittled from a twisted piece of wood. The care Day-Lewis has taken in building this character borders on obsession: His locution, the precise but laconic way he unpacks his tattered leather suitcase full of sentences, is borrowed straight from John Huston; he even mimics perfectly the grayed, whiskery undertones of Huston's voice. At first the choice seems brilliant. What voice better represents gruff, manly American determination than Huston's? Then again, once we notice an actor's choice, that choice is no longer transparent. And past a certain point -- once we begin to notice, and even perhaps marvel at, the way an actor squints to signal mistrust or doubt, or screws up the side of his mouth just so -- his choices move to the fore and the character recedes.

And that's how easily we can lose a great actor like Daniel Day-Lewis to greatness.

Day-Lewis' portrayal of Daniel Plainview is the kind of performance the Academy of Motion Picture Arts and Sciences -- that monolithic, unknowable group of temporary (very temporary) tastemakers -- tends to like, so it's no surprise he landed a best actor nomination. This is also the kind of turn that often wows moviegoers precisely because they don't know what to make of it. It's suitably mysterious ("Why is he doing that? I have no idea, but it's cool!") even as we can see its craftsmanship on display. As movie lovers, we want our actors to be able to do things we can't. If they're too natural -- too much like us -- whatever it is they're doing might not look like artistry. And what did we buy that movie ticket for, after all? I recently received an e-mail letter from a professional actor who was dismayed both by Day-Lewis' performance and by audiences' response to it: "Weird how so many people confuse 'acting that you can see' with great acting," he wrote -- as concise and honest a summation of the way we want to be impressed by craft as I've ever read.

The tragedy of Day-Lewis' performance in "There Will Be Blood" is that it defies the naturalism that made him a great actor -- and I use the word "great" unequivocally -- in the first place, as if he'd decided that naturalism is boring, that it no longer presents a challenge for him. Day-Lewis' Daniel Plainview is of a piece with Bill the Butcher, the character he played in Martin Scorsese's 2002 epic mess "Gangs of New York." Both performances are stuffed with exaggerated mannerisms and gimmickry: Day-Lewis struts through "Gangs" like a circus stilt-walker, as if, by design, he wants to seem larger than life. In both roles, he favors tortured locutions over simple declarativeness -- his "Gangs" accent is a thick, sludgy, semi-invented Noo Yawkese, probably calculated to suggest the savagery, the unvarnished manners, of a thug in old New York.

But do those choices tell us anything specific, anything that would otherwise be unknowable, about the inner lives of these characters? When I think of Daniel Plainvew and Bill the Butcher, I see technique, a set of artful schematics. When I think of the scruffy blond scrubber, Johnny, in "My Beautiful Laundrette" (1985), or the wheelchair-bound artist and writer Christy Brown in "My Left Foot" (1989), or the unjustly imprisoned Gerry Conlan in "In the Name of the Father" (1993), or Danny Flynn, the fighter with an IRA past in "The Boxer" (1997), I see people who live on the screen with so much clarity and vitality that the last thing I'm thinking of are the actorish smoke and mirrors it may have taken to put them there. In those performances -- and in numerous others, like those in "The Age of Innocence" (1993), "The Unbearable Lightness of Being" (1988) and, most recently, "The Ballad of Jack and Rose" (2005), directed by Day-Lewis' wife, Rebecca Miller -- Day-Lewis cuts to the truth of his characters' lives by challenging us. There's no challenge in Daniel Plainview: No moment where we fear, against our better judgment, that we might have some confusing, conflicting emotions for him.

Day-Lewis may have located what he thinks is the heart of Daniel Plainview, but he has forgotten to take us with him on the journey. When Plainview quizzes his supposed half-brother (played by Kevin J. O'Connor) about facts from the family's past the impostor ought to know, we see blank calculation in his eyes but no glow of revelation, no gradual unfolding of rage or passion. Plainview's ruthlessness is a foregone conclusion -- there's no need for Day-Lewis to play much else beyond that ruthlessness, other than his character's ragged affection for his son (played by the movie's finest actor, the young Dillon Freasier). And even then, Day-Lewis plays emotions, not objectives -- that is, he decides on the emotion, or the effect, instead of allowing the emotion to emerge from the situation. We may know what Plainview is feeling (or not feeling) by the look on his face, but Day-Lewis, hampered by his heavy brocade cloak of technique, is less effective at navigating the fine gradations of action necessary to define a supposedly complex character. Why does Plainview feel and act the way he does? We never know. I'm not looking for anything as simple as a line of dialogue -- "He didn't get enough love from his mother" or some other such nonsense. What I long for in the character of Daniel Plainview, and don't get, are contradictions, elusive trails that might lead us into some hidden cave of thought, memory or desire. The performance is all intention, no exploration -- a conclusion instead of a set of questions.

There's nothing inherently wrong with an actor's choosing to give a stylized performance rather than a naturalistic one. But if the performance fails -- as this one does -- then it comes off as an act of vanity, a flashy turn instead of one that casts steady illumination. Day-Lewis is an extremely cerebral actor, given to painstaking preparation for his roles: For "The Last of the Mohicans," he spent time living in the wild, building canoes and tracking and skinning animals. While filming "The Ballad of Jack and Rose," he lived apart from his family, ostensibly to help him slip more credibly into his role, that of an ailing, island-dwelling loner. Day-Lewis is reluctant to talk about process: "It's not that I want to pull the shutters down," he told the New York Times Magazine in an interview late last year. "It's just that people have such a misconception about what it is I do. They think the character comes from staying in the wheelchair or being locked in the jail or whatever extravagant thing they choose to focus their fantasies on. Somehow, it always seems to have a self-flagellatory aspect to it. But that's just the superficial stuff. Most of the movies that I do are leading me toward a life that is utterly mysterious to me. My chief goal is to find a way to make that life meaningful to other people."

That's an astute quote, and a telling one. The painstaking preparation Day-Lewis undergoes for his roles is the sort of thing people usually associate with Method acting. The common misconception about the Method is that it simply means an actor "becomes" his character. And as one of my colleagues always points out: That's not acting; it's schizophrenia. The Method is actually far subtler and more complex than even some imaginary notion of "becoming" a character might imply, demanding (among other disciplines) that an actor strive to create a recognizable reality based on his own experiences and observation of the world. He must also draw from his own personality as the source of all psychological truth. None of that necessarily has to do with living in the wild for a few months or intentionally separating yourself from your family (although, of course, if an actor is going to be filmed building a canoe, it's better if he looks as if he knows what he's doing). In any case, the second part of Day-Lewis' quote suggests that the most obvious ways an actor might prepare for a role may not be as important as the more nebulous, subterranean ones. Whether or not Day-Lewis is strictly a Method actor (and in practice, at least, the definition is often hazy), when he says, "Most of the movies that I do are leading me toward a life that is utterly mysterious to me," he's cutting to the core of how great acting happens: He's all but affirming that truth can be reached only partly by technique, not by technique alone.

But because the mechanisms of performance are so delicate, an actor can understand how great acting happens and still fail to deliver it. As articulate as Day-Lewis is about his craft, he's blind to the fact that in two of his most recent performances -- in "Gangs of New York" and "There Will Be Blood" -- he has, metaphorically, confined himself to that wheelchair. His performance in "There Will Be Blood" is wrought, not felt: It shows the grit of discipline and forethought but lacks spontaneity, fire, life. In that New York Times Magazine article, Day-Lewis revealed yet another telling detail: He prefers the James Stewart of the sunny Frank Capra pictures to the darker, more recessed characters Stewart played later, in Anthony Mann westerns like "The Naked Spur" and "Winchester '73." Maybe if Day-Lewis had connected with those later Stewart performances, he'd have found a key to the heart of Daniel Plainview.

The final scene of "There Will Be Blood" features an act of horror played as a miniature screwball comedy. But even this scene comes off as more absurd than operatic; it's overly pleased with its manufactured grimness. In these last moments of the movie, meticulously calibrated for maximum shock and dismay, Day-Lewis slouches toward some penultimate revelation, but he's crippled in a way his Christy Brown never was. As he sputters the movie's most memorable, and most idiotic line, "I drink your milkshake!" he's loving the moment, not living it.

As Konstantin Stanislavsky, the grandfather of Method acting, urged, you must love the part in yourself, not love yourself in the part. Day-Lewis portrays Daniel Plainview as if he were playing to a mirror, not an audience. The character's self-loathing comes off, paradoxically and unintentionally, as a manifestation of an actor's self-love. Day-Lewis, one of the finest actors we've got, has every reason to love himself, but not at the expense of his audience. When he comes to us emotionally naked -- as he did in "My Left Foot," "In the Name of the Father," "The Ballad of Jack and Rose" and any number of other performances -- he's as resplendent as a king. But caught in the trappings of supposed greatness, he's just an actor, a puppeteer pulling a series of color-coded strings to make us think and feel. Our job is to pretend we don't notice the tug, and to fool ourselves into believing that we don't expect more from him.