The unraveling of Pervez Musharraf's presidency has dealt a severe blow to Bush's fatally flawed policy in the region. 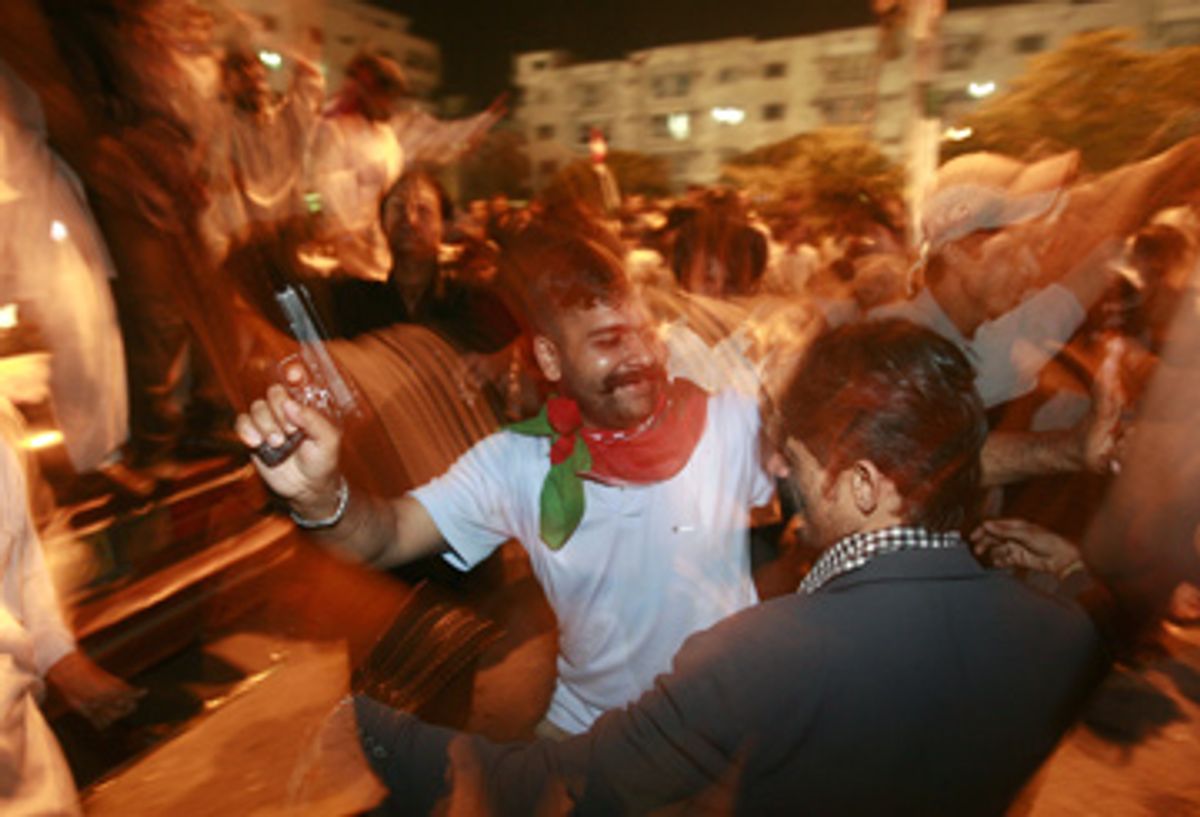 The party that slavishly supported Pakistani dictator Pervez Musharraf went down to a humiliating defeat in Monday's election, and took the failing fortunes of the Bush administration to a new nadir. Musharraf's main political rivals, the Pakistan People's Party and the Pakistan Muslim League 1-N, together gained a solid majority of seats. Amid a chorus of calls for Musharraf to step down, the two major victors are scheduled to begin talks Thursday on forming a new government. Although George W. Bush and Dick Cheney have built their war on terrorism on a close alliance with Musharraf, that entire hollow pillar of Bush administration policy has been dealt a severe, perhaps fatal, blow.

The new civilian Pakistani government on the verge of forming may be far less amenable to the hard-line, militaristic policies of the Bush-Cheney war on terror. That remains to be seen. But what is clear is that the administration's coddling of Musharraf -- lavishing him with billions of dollars in aid while turning a blind eye to his egregious assault on nascent Pakistani democracy -- has achieved precious little in the way of U.S. national security goals. Vietnam-style search-and-destroy missions, whether carried out at U.S. insistence by the Pakistani military in that country's northwest frontier, or by U.S. troops across the border in Afghanistan, appear only to have grown a new militant Taliban movement on both sides of the border. In the midst of this fundamentalist resurgence in the Pushtun tribal areas, Osama bin Laden remains at large.

The full dimensions of the election catastrophe for Musharraf were clear by Tuesday afternoon. With almost all the results in, Musharraf's Pakistan Muslim League 1-Q, or "king's party," had only 14 percent of the 272 seats in the National Assembly, or lower house of Parliament, for which the public votes directly. The party chairman and former prime minister, Chaudhry Shujaat Hussain, could not even get elected to Parliament, nor could some of Musharraf's Cabinet ministers. The party, now a small minority, admitted that it will have to sit in the opposition as its rivals form a government.

Musharraf's approval rating in polls spiraled down to 15 percent recently, having been in free fall during the past year as he made a series of severe political miscalculations. Chief among them was his conflict with the chief justice of the supreme court, Iftikhar Mohammad Chaudhry, whom he sacked. Some 70 percent of Pakistanis say Musharraf should step down.

Ironically, Musharraf, who came to power in a 1999 military coup, had presided over six years of strong economic growth, adding millions to the urban middle classes. Armed with access to international cable news and feisty new local channels, and wielding some 60 million cellphones, the new middle class vigorously protested the dictator's assault on the rule of law. Last June, Chaudhry addressed a rally of some 50,000 protesters who braved the wrath of the ruling military. Musharraf was forced to reinstate him in July, but then in early November dismissed the entire court and replaced it with his toadies when it became clear the justices would contest his election, while he was still a serving general, to the post of civilian president.

Musharraf's struggle with the judiciary was only one of his missteps. He was also heavy-handed in having his military assault a cultlike group holed up at the Red Mosque seminary in the capital of Islamabad, with much loss of life. The general Pakistani public showed no sympathy with these Pakistani Taliban, who had begun terrorizing video-shop owners and had kidnapped Chinese acupuncturists, accusing them of prostitution. Nevertheless, the images of the attack on the mosque reminded the public of Musharraf's iron fist, which he had earlier been careful to hide behind the velvet glove of political reform and the struggle against corruption and terrorism. Militants in Pakistan's northwest frontier responded violently to the crushing of the Red Mosque movement, unleashing a wave of suicide bombings and attacks on police checkpoints -- suggesting that Musharraf was unable to provide security.

With both the supreme court and the Red Mosque scandals raising questions about his judgment and increasing arrogance, Musharraf faced strong pressure from the Bush administration and from King Abdullah of Saudi Arabia to find a way of shoring up his government's legitimacy. Secretary of State Condoleezza Rice was reported by the New York Times to have developed the idea of having Musharraf resign from the military and become a civilian president, and of having former Prime Minister Benazir Bhutto return to contest parliamentary elections.

Rice apparently hoped that a political cohabitation of Musharraf with Bhutto would restore stability to the country, viewed by Washington as a crucial bulwark against the remnants of the Taliban and al-Qaida based along the Pakistan-Afghanistan border. Washington hoped that Bhutto's Pakistan People's Party, among the longest-established grassroots parties in the country, would be willing to cooperate with the PMLQ, loyalists to Musharraf, in a sort of national unity government.

At the same time, Saudi Arabia -- an oil-rich country that nonetheless needs Sunni Pakistan for military defense, for guest workers and for support against Shiite Iran -- sent back to Pakistan former Prime Minister Nawaz Sharif, whom Musharraf had overthrown in the 1999 coup, and who had been in exile in the Saudi kingdom. In November, Sharif explored an alliance with Bhutto and demanded that the supreme court be reinstated. Saudi Arabia may have been afraid of an unadulterated Bhutto prime ministership, which would support left-of-center secular policies that were anathema to the religious leaders in Riyadh. Sharif and his PMLN, which leaned right of center and were more sympathetic to political Islam, might halt a slide of the Pakistani public toward secular liberalism.

But the Rice plan had already begun to unravel. Bhutto was reluctant to cohabit politically with Musharraf once he had high-handedly replaced the entire supreme court and so violated the rule of law. Then, on Dec. 27, calamity struck when the Bhutto was assassinated. In the aftermath, the PPP stronghold of Sindh Province in the south erupted in an orgy of anti-government violence, with government buildings and banks attacked and rails torn up. Polling showed that 60 percent of Pakistanis blamed Musharraf for Bhutto's death. Musharraf toyed with the idea of canceling the elections -- but backed off under severe pressure from the Bush administration, which was horrified by the thought that he might end up another shah of Iran (overthrown in Khomeini's 1979 revolution).

The campaign season leading up to the Feb. 18 elections was marred by several bombings and sporadic violence. Benazir Bhutto was succeeded as party head in theory by her young son, in college abroad, but in practice by her widower, Asaf Ali Zardari. Zardari, who gained a reputation for corruption in the 1990s, was too unsympathetic a figure to capture a sympathy vote of any significance for the PPP, and it was mainly the Sindhi ethnic group that remained loyal to the party, along with a few districts in Punjab and the North-West Frontier Province. Only 45 percent of the electorate came out to vote, a slightly higher proportion than the past two elections. As of late Tuesday, the Pakistani newspaper Dawn was reporting that the Pakistan People's Party had gained 88 seats of the 272 in contention, only a slight gain over its 2002 performance, when it won 81.

There are three big changes in the shape of Parliament in this election. First, the PMLQ, Musharraf's supporters, dropped from 117 seats to as few as 38. Second, the rival branch of the Muslim League, loyal to Nawaz Sharif, increased its proportion of seats from 7 percent to nearly a quarter. The PMLN also emerged as the biggest party in Punjab Province, giving it a key position in Pakistan's most populous and powerful region.

Third, the coalition of fundamentalist religious parties, the United Action Council (the Urdu acronym is MMA), fell apart because its largest component, the Jama'at-i Islami, refused to participate in the elections unless the supreme court was reinstated and a rule of law restored. Only a much smaller faction ran, gaining only five seats. In 2002, the MMA had been a major force in Parliament, with 17 percent of the seats. The fundamentalists not only lost their position in the federal Parliament, but also lost control of the North-West Frontier Province, where the Pathans, or Pushtun ethnic group, turned against their hard-line religious policies and migrated instead to a secular nationalist party, the Awami National Party, which champions Pushtun rights.

Nawaz Sharif is now in a prime position to ally with the PPP against his old nemesis, Musharraf, and to push for the reinstatement of the supreme court and ultimately for Musharraf's ouster. That outcome would be sweet revenge for Sharif, whom Musharraf overthrew and accused of attempted murder. (Sharif had denied Musharraf's plane, which was running out of fuel, permission to land in Karachi in the course of the general's attempted coup. Local military units rebelled and took control of the airport, averting a crash and allowing Musharraf to come to power.) Musharraf is also a target for Benazir's widower, Zardari, who clearly blames the president for his wife's assassination.

It's possible that the new civilian Pakistani government about to be formed will foster a more stable country, which is ultimately in the interest of Pakistan and of the United States. Meanwhile, President Bush the Wilsonian, who said he wanted to spread democracy across the Muslim world, and President Bush the militarist, who favored invasions and occupations, have been at war with each other for some time now. In Pakistan, the spreading of democracy -- regardless of whether the outcome is in line with U.S. expectations -- may be the only path left for the Bush administration now.