The Illinois senator did well with campus liberals, white men, crossover Republicans and independents, but he made inroads into Clinton's working-class base too. 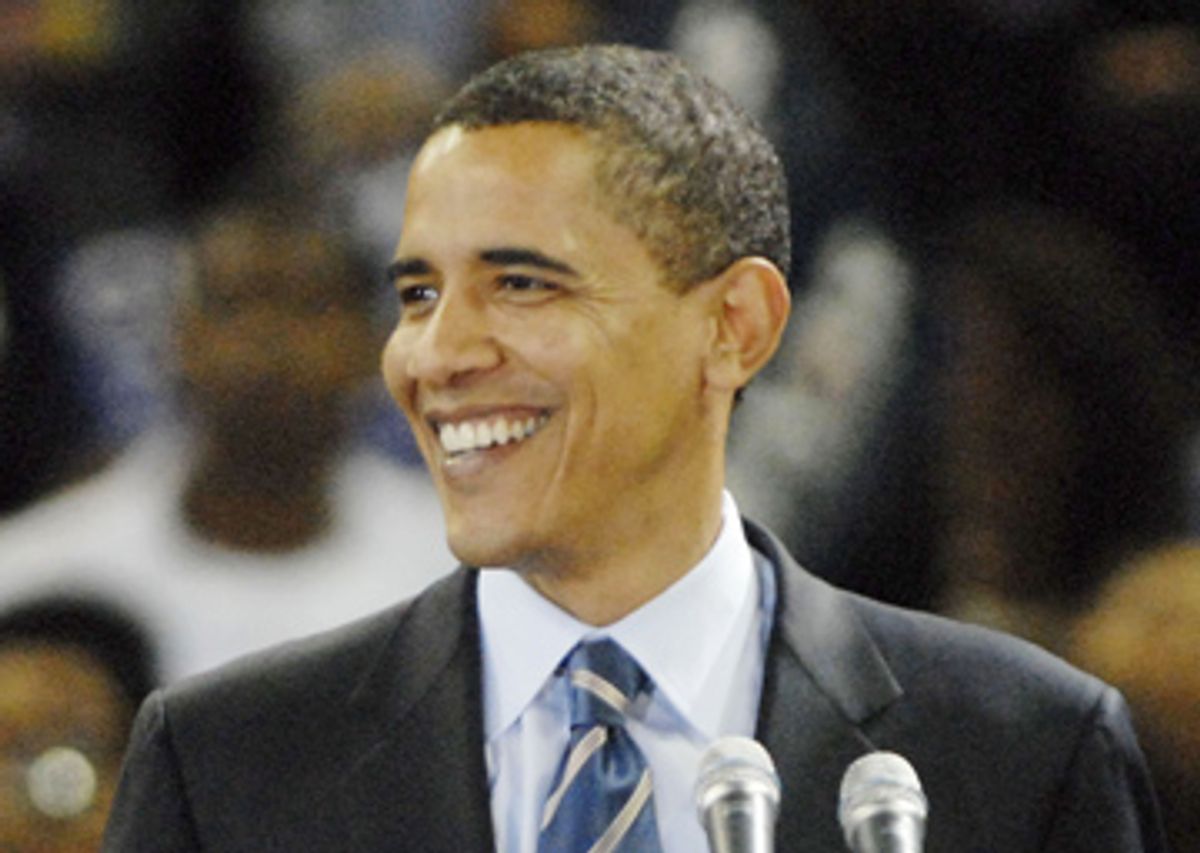 It was only a few minutes after 8 p.m. when the Great Dane, a brew pub within sight of the state capitol's illuminated eggshell dome, learned that Barack Obama was leading in Wisconsin. Soon after that, the networks called the state for Obama, and Gov. Jim Doyle mounted the stage to address his Wisconsin victory party. Obama was still speaking in Houston, but the bartenders turned the sound off, and Doyle stepped to the microphone.

"We in Wisconsin have changed the course of history," he said. "We are the state that decided who the Democratic nominee will be and who the next president of the United States will be."

Doyle was backdropped by University of Wisconsin students sporting red "Badgers for Obama" T-shirts, all bearing the candidate's face. At his side was Madison Mayor Dave Cieslewicz, who triumphantly declared that Obama had carried the campus 10-to-1. Everyone had expected Obama to run up the score at the famously liberal school, but as the results rolled in, it became clear that Obama had won counties all across the state, from Lake Michigan to Lake Superior.

He did so by mobilizing young people -- first-time voters were up 17 percent over the 2004 primary, according to exit polls provided by the campaign -- and by cutting into Hillary Clinton's expected base of blue-collar workers. Obama won half of union voters, campaign officials said. (Exit polls had Obama winning union households 53 to 44 percent.)

That bodes well for Obama's prospects in some other upcoming primary states, said state Sen. Bob Jauch, an Obama supporter who represents a North Woods district.

"Ohio and Pennsylvania, you begin to say, there's something in there that's similar to Wisconsin," Jauch said.

If any state was designed for a showdown between Barack Obama and Hillary Clinton, it was Wisconsin.

Barack Obama's base and Hillary Clinton's base live side by side here. At least among white voters, Wisconsin mirrors the divisions in the Democratic Party that have made this primary campaign a deadlock. On the one hand, this is the cradle of the progressive movement. (One of its innovations: the first presidential primary, held in 1912.) It's also a state with a long tradition of environmentalism. One of America's greatest conservation books, "A Sand County Almanac," was written by Aldo Leopold, a professor at the University of Wisconsin. Wisconsin believes in public education -- more than 90 percent of its residents have high school degrees -- and public radio -- Madison's WHA is the oldest station in the United States. The Badger State's progressives are proud of their liberal traditions, see them as a model for the rest of the nation, and have been waiting all their lives for someone like Obama. (Their own senator, Russ Feingold, passed on a race for president this year.)

Hillary Clinton went after the voters who won't be found reading the Progressive, which was founded by Sen. Robert La Follette, or eating in Indian restaurants in downtown Madison. They're the snowmobilers, bowlers, deer hunters and Packer fans who give the state its ethnic flavor and distinctive foodways -- German beer, Danish kringle, Icelandic fish boil. They live in industrial towns like La Crosse and Racine, or gray ports like Green Bay and Ashland. Their economic struggles are the reason Wisconsin's per capita income is lower than the nation's at large. Having watched dozens of factories leave the state, they were a target audience for Clinton's message that "if you don't have a strong manufacturing base, you can't be a strong country."

Wisconsin was significant because the state had the week to itself. It was the first state in which the finalists went one on one, without another contest to divide their attention (Obama had a lock on his native Hawaii). Obama, however, spent much more time here. Obama started his campaign on home turf -- the 17,000-seat Kohl Center in Madison. He filled it to capacity, a feat that is already becoming part of Wisconsin political lore.

"This is our moment," he told his usual gang of well-educated liberals. "This is our time, and where better to affirm our ideals than Wisconsin, where a century ago the Progressive movement was born?"

But Obama's next move was to a General Motors plant in Janesville, where workers have been offered a buyout to make way for lower-paid labor. Obama promised a middle-class tax cut, a $4,000 tuition tax credit, and environmental and labor provisions in trade agreements. He chased that by pledging billions of dollars to develop renewable fuels and rebuild roads and bridges.

Throughout the weekend, Clinton vacillated between defeatism and aggressiveness. She didn't show up in Wisconsin until Saturday and planned to be gone by Sunday supper. Clinton's aides played down their candidate's chances -- she was concentrating on the bigger prizes of Ohio and Texas.

For most of last week, Clinton wasn't in the state, but her face was on every TV in every tavern. Double negatives may be bad form in grammar, but apparently not in political advertising. In one 30-second spot, she accused Obama of ducking a debate at Marquette University and trumpeted that only her healthcare plan would provide universal coverage. She also sent out a mailer claiming that Obama's plan would leave 15 million Americans uninsured. Gov. Doyle was miffed that Clinton was attacking Obama with ads, instead of attacking him to Wisconsinites' faces.

"I think that their ads didn't help her at all," Doyle told Salon on election night. "They put out an ad saying he wouldn't debate her, when she wasn't even in the state and he was here meeting thousands of people."

Clinton finally showed up at the Democratic Party's Founders Day Dinner in Milwaukee, where she accused Obama of making empty speeches. Later, she accused him of stealing those empty speeches from Massachusetts Gov. Deval Patrick, making them empty of meaning and originality.

Obama, in turn, linked Clinton to the North American Free Trade Agreement, signed by her husband, which is blamed for encouraging companies to export jobs from Wisconsin.

At some point over the weekend, Clinton seemed to decide that Wisconsin was worth winning. An ice storm froze out her Sunday events, forcing her to spend an extra day in the state. Snowed in, she realized it might be nice to leave with some souvenir delegates. Her plane didn't leave until late Monday, after a 5,000-strong rally in Madison.

As Clinton hustled between Lake Michigan and the Mississippi River, her press office chucked out a 13-page "Economic Blueprint." Aimed at working-class voters, it included a plan to end the subprime mortgage crisis by freezing interest rates and halting foreclosures for 90 days.

Clinton looked grim in her election night speech. She certainly chose a grim venue: Youngstown, Ohio, a city of scrap heaps and abandoned steel mills. There, she doggedly stuck to the message that her competence will beat his charisma. Her concern for the needy is genuine, but it's sounding drab against Obama's calls for hope and change, however abstract those may be.

"We need a president who relies not just on words, but on hard work, to get America back to work," Clinton said. "We can't just have speeches. We have to have solutions. I know what's happening in America. People are struggling. They're working the day shift, the night shift. They don't have healthcare. They're just one paycheck away from losing their homes."

Wisconsin is never an easy state to carry. Its grass-roots political traditions make voters maddeningly independent -- at least for political professionals. In 2000, Al Gore drew a huge crowd to the state capitol as he tried to fend off Ralph Nader. In 2004, George W. Bush and John Kerry held competing rallies in Milwaukee on the day before the election. (In both cases, the Democrat prevailed -- by less than 1 percent.) This year's primary came at a turning point in the nomination process. Obama and Clinton are nearly tied in delegates, and while Obama has been inching ahead, he hasn't yet broken the race open. It also provided a chance for both candidates to show that they could reach into the other's base, which is going to be the key to breaking this stalemate before the convention in Denver.

Obama also benefited from two legacies of the progressive movement: open primaries and same-day registration. Open primaries allowed moderate Republicans to cross over for Obama. With that in mind, he campaigned in the Milwaukee suburb of Waukesha, the state’s most Republican county. As a result, he won 72 percent of Republicans, and 64 percent of independents. Same-day registration brought in young voters, an important Obama constituency. Obama’s campaign posters declared "Students Can Register at the Polls." He carried 70 percent of the under-30 vote.

"Obama won in a state that Hillary Clinton was 15 points ahead in," he said. "By winning across the board, I think that makes it hard for her to go on."

Obama was already 1,200 miles away, in Houston, a city that could not be more different from this one: semitropical, conservative, multiracial. He thanked Wisconsinites, briefly, for coming out to vote in 5-degree weather. Then, already looking ahead to the general election, he gave Texas a message similar to the one he'd given Wisconsin: "We're going to need all your help, your organization, your mobilization, your voice, to change America in the next four years."