Can a Cuban Democrat win in South Florida?

Real change in our hard-line Cuba policy may depend more on who's in Congress than who wins the White House. Suddenly, Miami's three Cuban Republicans look beatable. 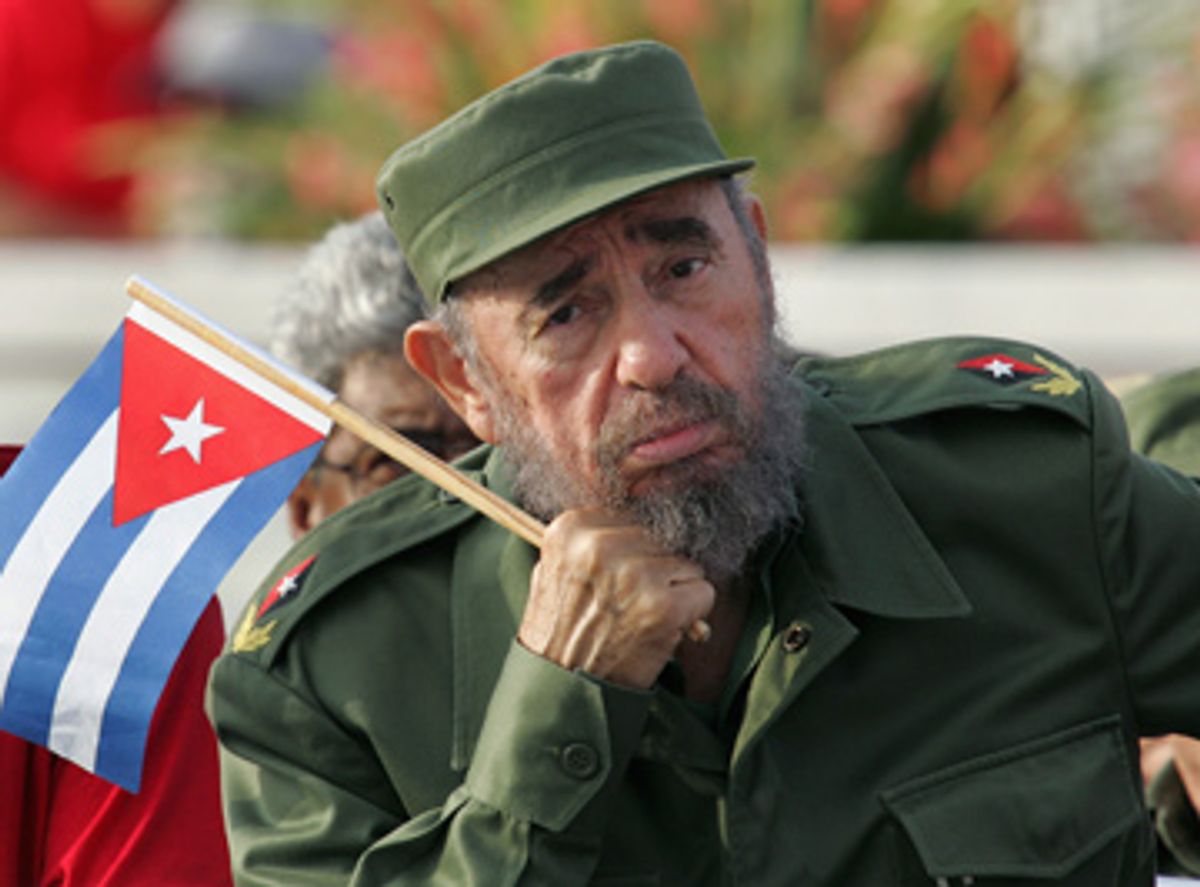 Fidel Castro resigned as Cuba's president Tuesday, but he still holds power in the United States. The anti-Castro animus of South Florida's politically connected exile community has long been, and remains, the driving force behind the Cuba policy of the U.S. government.

That may continue to be the case until El Comandante's dying day -- or it could change come November with a Democratic victory. But the crucial Democrat on Election Day may not be the presidential candidate, even though the current front-runner has indicated a willingness to soften America's hard line toward Cuba. Real policy change may hinge on whether a Democrat wins one of three South Florida House seats currently held by Cuban-American Republicans. It's a once unthinkable possibility that, this fall, may suddenly be more than a pipe dream.

Fidel Castro has always cast a peculiar spell over South Florida. When he fainted during a speech in Havana in June 2001, many Cuban exiles here dropped what they were doing to drive around town honking their car horns. Miami TV stations sent reporters to Cuban restaurants to chronicle the rants of patrons wishing for his death. When he fell ill in July 2006, the ranting and honking recommenced. After Tuesday's announcement, there was another round of public noise-making.

Castro has also long had an outsize influence on Washington. Presidents and congressmen alike have catered to the rage of the Cuban diaspora, sustaining a 46-year-old trade embargo against the island that even exiles admit has been a failure. Republicans and Democrats share the blame. Efforts to lift the embargo and allow people-to-people contacts have repeatedly died in Congress. The Bush administration has actually clamped down further, making travel to the island more difficult.

The power of the exile community has meant that few presidential aspirants with a real shot at the White House have risked questioning U.S. policy. Republicans in particular pay heed to South Florida's half a million Cuban-American voters, who are longtime allies, and cater to their needs. In July 2004, during his reelection bid, President Bush tightened restrictions on travel to and trade with Cuba. Now people with relatives on the island can visit only once every three years and send just $300 every three months. The move made life harder for exiles recently arrived from Cuba, but it wasn't aimed at them. Bush was solidifying his support among those Cuban-Americans who can vote, the ones who arrived in the U.S. in the 1960s and '70s and have lived here so long that they don't travel back to Cuba to visit relatives.

In turn, South Florida's Cuban-Americans have traditionally voted 4-to-1 for Republicans. Their loyalty has given the GOP a head start of 300,000 votes in statewide elections. In 2004 President Bush's margin of victory over John Kerry in Florida was 381,000 votes.

This election cycle, the two Republicans who are still in the race for the White House have made sure to up the hard-line ante. (Ron Paul advocates lifting the embargo, but he was never in danger of securing the Republican nomination.)

Back in December, Mike Huckabee dumped his anti-embargo stance of yore in order to embrace U.S. sanctions on trade and travel to Cuba. On Tuesday, Huckabee cast suspicion on Castro's resignation, saying he would continue to have power in Cuba until he was dead.

Likely Republican nominee John McCain has also been under Castro's spell. During visits to Miami prior to Florida's Jan. 29 primary, McCain vowed not only to uphold the embargo and travel ban but also to increase spending on Cuba democracy assistance programs and Radio and TV Martí, which are Florida-based Spanish-language broadcast services aimed at Cuba. Surveys consistently show that Radio and TV Martí have minuscule audiences, but their federal funding continues to increase.

Like their Republican counterparts, the two Democratic candidates seized the opportunity of Castro's resignation to call on the Cuban government to free political prisoners and take steps toward free elections. But where Hillary Clinton has essentially supported the Bush administration's policy, Barack Obama has dared to depart from the pack.

Obama has not proposed ending the trade embargo, but last August he delivered a speech in a Little Havana auditorium that included a pledge to end restrictions on family visits and remittances to Cuba. American citizens without relatives in Cuba would have to wait until a democratic opening occurred.

But perhaps more important, three Latino Democrats running for Congress in South Florida this fall have agreed on a policy identical to Obama's. Their gambit is based on the belief that the hard-line approach is less popular among Cuban-Americans than it once was -- that just as Castro is growing old and infirm, so are his most implacable foes on the mainland.

Currently, three Cuban-American Republicans represent South Florida in the U.S. House, Ileana Ros-Lehtinen in District 18, Lincoln Diaz-Balart in District 21 and Lincoln's brother Mario in District 25. Each of these adjoining districts is at least 44 percent Cuban-American, and all three lawmakers are staunch backers of the embargo and the travel ban. Democratic strategists acknowledge privately that the Democratic leadership in the House and Senate will have little appetite for altering U.S. Cuba policy until one of these three incumbents is unseated.

But such an event, once close to inconceivable, may now be within the realm of possibility. In all three districts the Republican Party has the largest number of registered voters. But in all three districts, the incumbents, who used to be reelected without serious opposition, have seen their margins of victory drop in each of the past three elections. In 2006, the Democratic challengers won from 38 to 41 percent of the vote. Last fall, in part of District 18, a Cuban Democrat won an election for an open state legislative seat formerly held by a Cuban Republican. And in all three districts Republican voter registration numbers are down since 2006 while Democratic registration is up and independent registration is up even further. "Independents, I don't care what district you're in in this country, are leaning Democrat this year," says political consultant Jeffrey Garcia of Rindy Miller Media, who is working for two of this fall's three Democratic challengers.

Garcia also says his own polling shows that reelection numbers for all three GOP incumbents -- the percentage of district voters who would like to see them reelected -- are at 45 percent or below. Coming from an independent pollster, those figures would be enough to make the incumbents nervous. Coming from a partisan source, they're at least sufficient to help the Democratic candidates raise money. Garcia claims the Democratic Congressional Campaign Committee is considering committing funds to all three challengers later this year. The DCCC has already funded Spanish-language radio attack ads targeting all three incumbents for voting against the expansion of the federal State Children's Health Insurance Program (SCHIP).

The challengers have put together a unified Democratic position that mirrors Obama's: Lift the restrictions on family travel and remittances that President Bush imposed, at the urging of the three Republican incumbents, in 2004, but keep the rest of the embargo in place for now. Garcia says his figures show that more than half the voters in all three districts oppose the current travel restrictions. One of the challengers, Joe Garcia, a Cuban-American running against Mario Diaz-Balart in District 25, is the director of the New Democratic Network's Hispanic Strategy Center. (He is not related to Jeffrey Garcia and is not his client.) Garcia has promoted a relaxation of the travel ban since taking the job in 2004, and was involved in the discussions between the NDN and the Obama campaign that contributed to shaping Obama's Cuba policy. "To help advance democracy we need to allow for the reunification of Cuban families and the direct sending of remittances to the island's brave dissidents," Garcia said in a statement released after Castro announced his resignation Tuesday. "It's time to break from the status quo."

The other Democratic candidates, both Jeffrey Garcia's clients, are Colombian-American Annette Taddeo in District 18, running against Ileana Ros-Lehtinen, and Cuban-American Raul Martinez, challenging Lincoln Diaz-Balart in District 21. Martinez, a charismatic figure who served nine terms as mayor of Hialeah, the district's largest municipality, looks to be one of the strongest congressional candidates the Democrats have yet fielded in the three Cuban districts. (He also survived a federal corruption prosecution initiated by U.S. attorney Dexter Lehtinen, Ileana's husband. But that's another story.)

It is still against the odds that there will be a Cuban-American Democrat representing South Florida in Congress next January. But should just one of the challengers prevail on Election Day, it would provide significant political cover for a shift in relations between Cuba and the United States. Having a South Florida Latino calling for an easing of the travel ban would give the Democratic leadership -- whether that means a Democratic president or Speaker of the House Nancy Pelosi or both -- license to do the same. And rolling back the travel ban would be the first step toward ending the embargo. It would also mean that at long last, after half a century, someone besides Fidel Castro would actually be in charge of America's Cuba policy.

Kirk Nielsen is a journalist based in Miami Beach. He has written about Cuba and Cuba-related politics for the Village Voice and Miami New Times.