The rehab veteran re-creates Marilyn Monroe's final photo shoot before she died from a drug overdose. 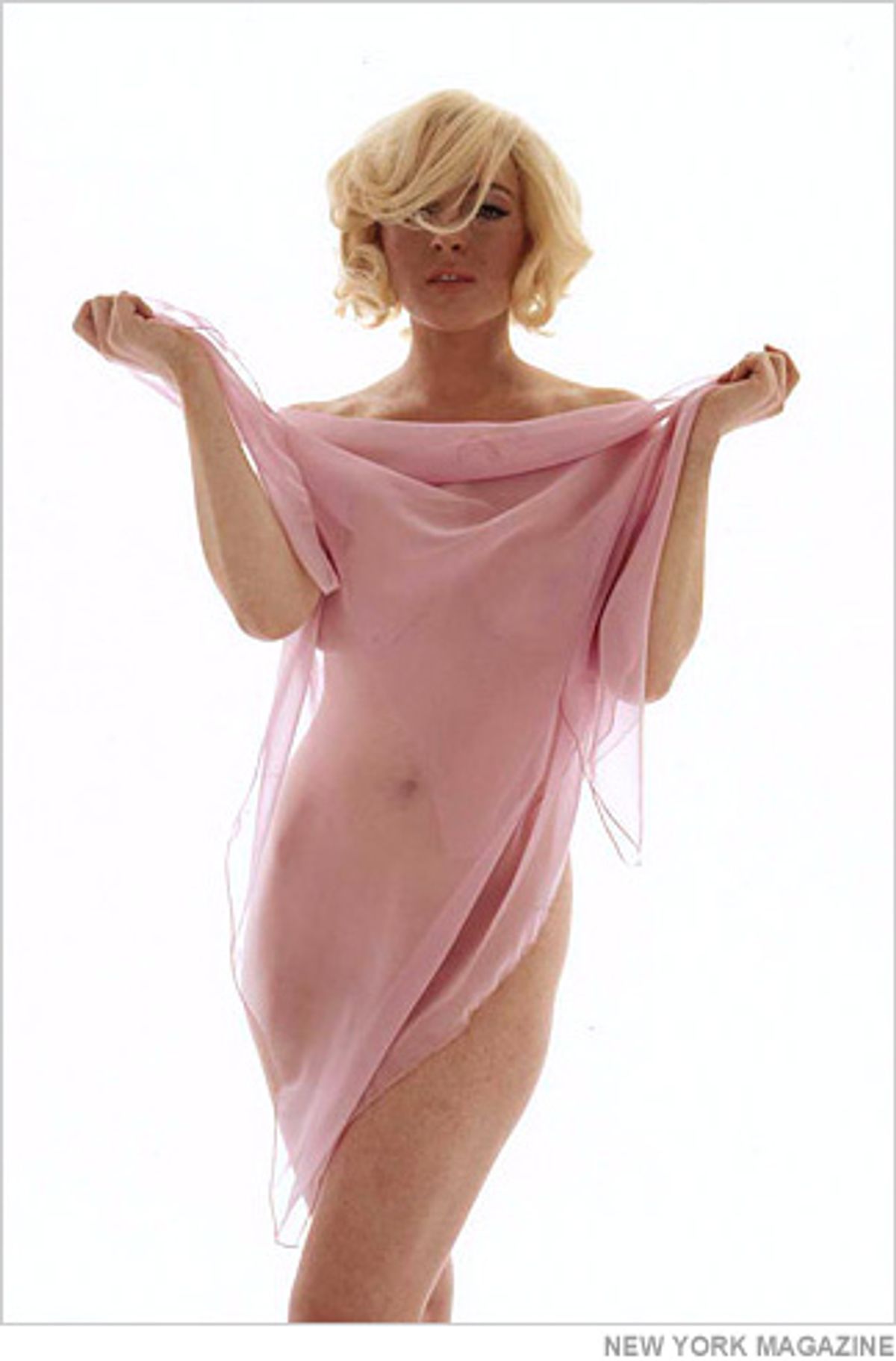 Surely, you've heard: Lindsay Lohan has publicly exposed her body for the first time (except for, um, that chest-'n'-cooter flashing phase) in a New York magazine remake of Marilyn Monroe's infamous photo series, "The Last Sitting." Photographer Bert Stern re-created the iconic photos he took 46 years ago during three booze-filled days at the Hotel Bel-Air. Things were slightly different this time: The one-on-one intimacy of the original shoot was updated with a protective Hollywood entourage; Monroe's airy locks were poorly duplicated by a straw-blond wig; and, presumably, the 78-year-old didn't have designs to sleep with his muse this time around. Some things, though, remained the same: Lohan playfully and seductively rolls amid white sheets and exposes her breasts again and again (and again!) behind a series of sheer scarves.

But far more interesting than the photos -- which you may or may not be able to access, as the site's server has been overloaded -- is what inspired Lohan to officially reveal her private bits for the camera. The thrice-rehabbed starlet says she simply couldn't turn down the opportunity to re-create the final photographic romp before Monroe overdosed on barbiturates; she felt being asked to participate was in itself "really an honor." This requires repeating: The rehab veteran felt honored to re-create the final booze-fueled photo shoot that came just six weeks before Monroe died from a drug overdose. In fact, Lohan idolizes the late icon; she has filled her house with Monroe memorabilia -- including a painting showing a tipped-over "bottle of pills next to her" -- and even purchased an apartment where the star once lived.

For her part, Lohan frames the shoot as a way to revolt against the soul-grinding Hollywood machine. She tells New York that both Monroe and the recently deceased Heath Ledger are "prime examples of what this industry can do to someone" and argues -- much as she might deconstruct the Hollywood cooter cabaret of 2006 -- that Monroe's decision to disrobe was subversive. "She's saying, 'Look, you've taken a lot from me, so why don't I give it to you myself,'" Lohan says. "She's taking control back." Except, there is no self-protection, no real reclamation of personal power there; enthusiastically objectifying oneself seems only to satisfy and confirm the public's total ownership of female celebrities.

The New York piece exalts how Stern's original photo series preserved the "poignant humanity of the real woman -- beautiful, but also fragile, needy, flawed -- from the monumental sex symbol." But what, I ask, is the difference? They are one and the same. Ultimately, "The Last Sitting" didn't dampen Monroe's sex symbol flame, but fanned it; Stern's series of photographs are part and parcel to Monroe's ultimate legacy and symbolism. Then there came this line, which almost caused me to spew coffee across my keyboard: "In our armored, airbrushed age, his [original] achievement feels almost revolutionary." At the time it was revolutionary, sure, but now it's simply par for the paparazzi course.

As Jessica Valenti wrote this week on Feministing, "This spread fetishizes the death and downfall of women in the public eye." That Lohan, angrily as it may be, embraces the public's smothering interest in sex symbols in all their "fragile, needy, flawed" glory seems a symptom of the increasingly common sex-symbol Stockholm syndrome.