"The Duchess of Langeais"

The push-pull between immediacy and remove pulses through this mysterious tale of obsessive love and treachery. 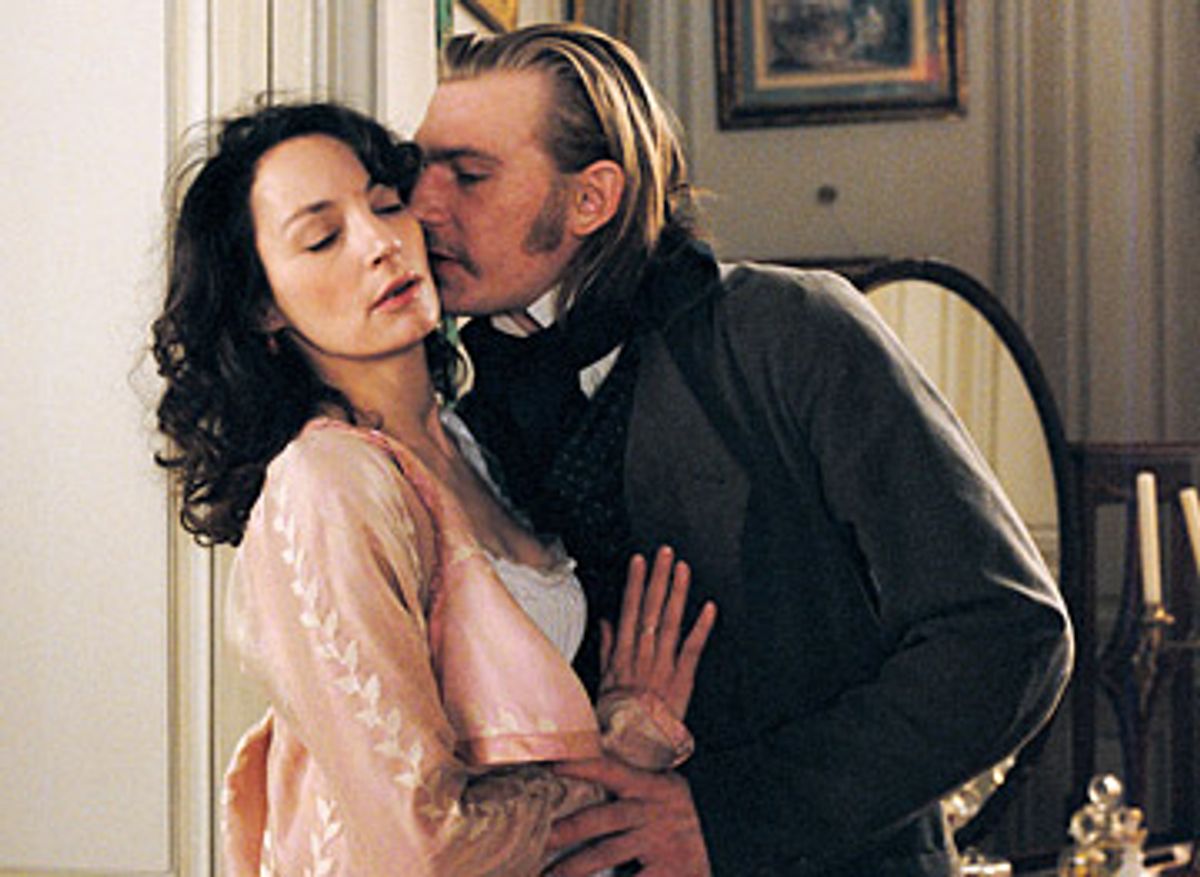 If costume dramas have the power to transport us, they also run the risk of distancing us. Sometimes we find delight and exhilaration in connecting with people who live in an era that's nothing like our own; other times, watching actors drift around a set in period finery, uttering dialogue unlike anything in current speech, can make us feel lonely. Jacques Rivette's "The Duchess of Langeais," a fable of obsessive love and treachery based on a Balzac short story, isn't the most immediate and accessible of costume dramas: There's something a little cool and remote about Rivette's approach -- at times it's almost as if he's spying on his own characters, holding the camera very still to prevent detection as he waits for their dark, secret feelings to seep through the formality of their actions and words.

But that push-pull between immediacy and remove gives "The Duchess of Langeais" its gentle but insistent pulse. Rivette, 79, has been making ardent, poetic, leisurely pictures for more than 50 years: His 1956 short "Le Coup du berger" ("Fool's Mate") is often cited as the first film of the New Wave. His finest movies -- among them the 1974 "Celine and Julie Go Boating" and the 1991 "La Belle Noiseuse" (the latter of which is also adapted from Balzac) -- unfold like languorous adventures. Rivette has always been a filmmaker deeply in love with painterly compositions and lighting, but he's as fascinated by the passage of time as he is by the space of a movie frame: The audacity of his 12-hour-plus "Out 1" -- which is rarely shown but was screened by the Museum of the Moving Image, in Queens, in 2006 -- lies in the way Rivette guides us through a half-day's worth of moviegoing as if it were a gondola ride. I remember little about the actual plot of "Out 1"; what I'll never forget about the experience of seeing it is how unnatural it felt, emerging from the theater after two six-hour marathons over two days, not to be watching a movie -- Rivette had somehow turned the experience of watching this very long, very episodic picture into a mirror of life itself.

"The Duchess of Langeais," at just two hours and 17 minutes, isn't nearly as challenging, or as exhilarating, as some of Rivette's other work. The picture is stiff and awkward in places -- even Rivette's signature meditative camerawork feels more static, less fluid, than usual. (His DP here is frequent collaborator William Lubtchansky.) But the picture has an unsettling, haunting quality that I haven't been able to shake. "The Duchess of Langeais" is set in 1820s Paris, in the salons of the aristocracy; Jeanne Balibar (the French actress who also appeared in Rivette's "Va Savoir") plays Antoinette de Langeais, a haughty, handsome, self-possessed creature who can attend a ball every night if she so chooses. At one of these events she meets a handsome general with the demeanor of a thundercloud, Armand de Montriveau (Guillaume Depardieu). He's stricken by her, and vows to himself that he'll have her as his mistress. (She's married, although Rivette never shows us the duke -- he's merely an asterisk in the story.) Antoinette, sensing Montriveaux's attraction to her, initiates a deviously seductive cat-and-mouse game; Montriveaux is an imposing, dashingly masculine figure, but in her claws he instantly becomes one very limp mouse.

From there, Rivette leads us through a maze of romantic treachery and longing, with some kinky possessiveness tucked in the corners. This is not a story that can end happily (and that's not a spoiler, since Rivette opens the movie with the story's aftermath and then circles back to the beginning). Even though the picture looks bright and polished in places -- Rivette favors vivid drawing-room tones of red, gold and blue here -- we also see cavernous rooms lit with too few candles, and lonely carriages escaping into the eternity of nighttime. These images are all part of Rivette's elegant longhand, his way of building a mood of muted despair.

But Rivette's actors are always more valuable to him than camera movements or lighting effects. Balibar is a bold, fascinating actress, but I confess I found her performance here slightly bewildering: Antoinette is a coquette, a tease, and a merciless one. Balibar, with her strong, dark features, doesn't seem like the right kind of actress to play a character who weaves so much slippery, dangerous enchantment. (It probably doesn't help that Balibar's figure is too strikingly angular for the filmy Empire-style gowns of the era.) I kept watching her, wanting her to be more yielding, more vulnerable; as it is, she just seems too cool, and too muscular, spiritually and physically, to be able to lure Montriveaux into any honey trap.

But there are moments when Balibar's face betrays such intense heartbreak that I couldn't help warming to her. And as Montriveaux, Depardieu (son of Gerard) looks so ravaged and tortured that, despite his manly carriage, he's almost more like a tragic heroine than a hero. His eyes, and his hair, are wild and unsettled. Montriveaux, a war hero, walks with a stiff-legged gait (Depardieu himself had one of his legs amputated several years ago), and watching him move is key to understanding his character: He walks as if the pain he carries in his heart has radiated, like a cancer, straight into his marrow.

What these two lovers do to each other during the course of their ritual dance is the sort of thing that might make even God avert His eyes. Maybe even Rivette himself is a little too delicate for this ferocious, intensely focused pair. But he's fascinated by them, and ultimately, he loves them. "The Duchess of Langeais" may not be great Rivette, but it's mysterious and rich in a way that few other filmmakers can achieve even on their best days. The lovers in "The Duchess of Langleais," as elusive and enigmatic to each other as they are to us, never undress for each other -- it would be unthinkable for them to remove their armor. Rivette allows them their dignity, and their suffering. We don't need to see them naked to know how human they are.