McCain's alleged affair with a lobbyist isn't a big deal. What matter more are his ties to special interests, like her clients in the cruise ship industry. 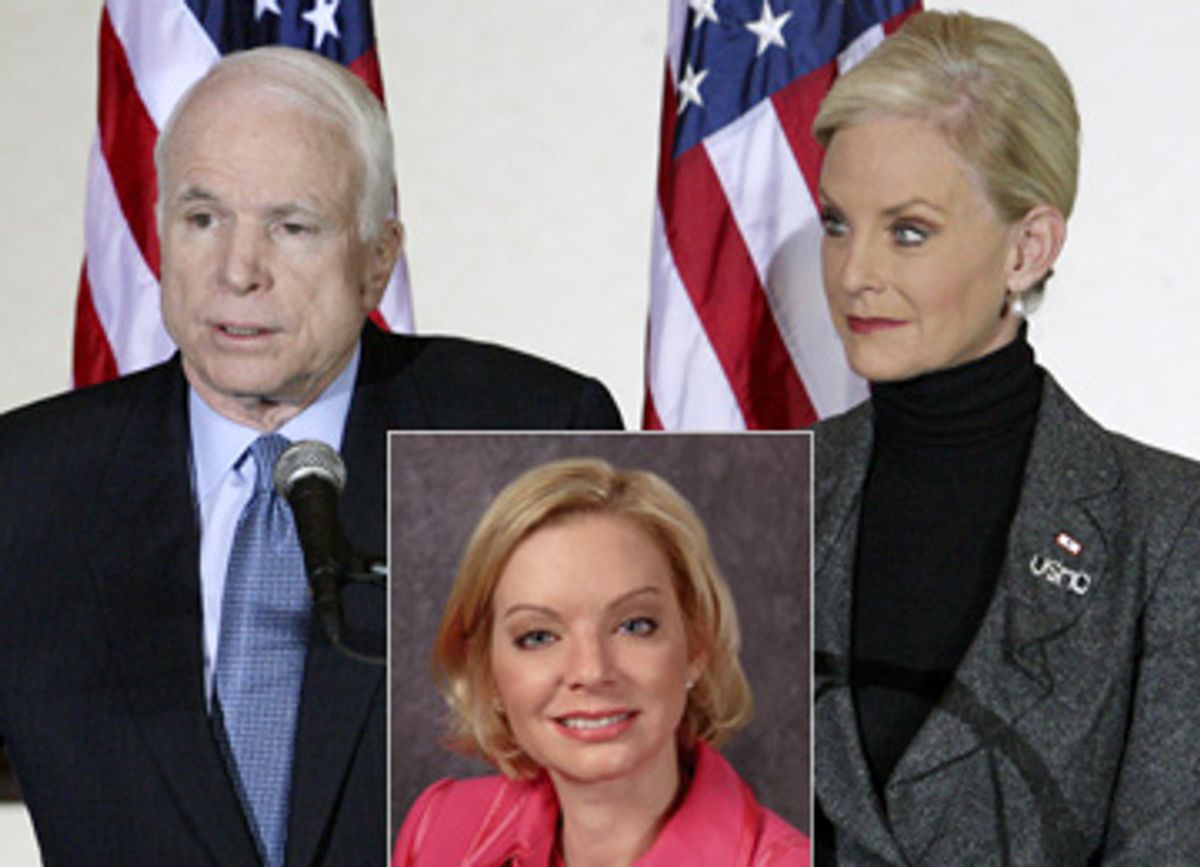 While reporters, critics and campaign flacks debate whether the New York Times probe of John McCain's relationship with lobbyist Vicki Iseman was undercooked or overdone, the sexual implications should not distract from the story's real significance. Iseman is blond, buxom and three decades younger than the Arizona senator, but nobody except Cindy McCain should resent their alleged affair. Her husband has never pretended to be a sexual puritan, like so many of the hypocrites in his party.

But McCain has long pretended (and still pretends) to be purer than ordinary politicians compromised by special interests, soft money and lobbyist perks, which in Washington can include anything from pizza and beer to private air travel, free limousine service, luxury gifts and, of course, extramarital sex -- as scandal after scandal has proved in salacious detail.

We may never know exactly what kind of relationship McCain pursued with Iseman. But if she is a symbol of broader patterns in his political career, as the Times story suggests, then it becomes easier to understand why many of his colleagues regard this great reformer as a preening phony. Although he has often displayed independence from the pressures of the capital, he has sometimes succumbed to those influences; and while he may seem to shun lobbyists, he actually surrounds himself with them.

Indeed, the McCain spokesmen who have mounted his aggressive counterthrust against the New York Times are lobbyists themselves, or at least that's what they do when they aren't speaking up for the integrity and incorruptibility of their candidate.

Among the loudest McCain mouthpieces is Charlie Black, a seasoned Republican operative whose client roster dates back to such paragons as the late Filipino President Ferdinand Marcos and several African dictators, and more recently has featured Erik Prince, the mercenary entrepreneur who founded Blackwater. (Black's wife is a lobbyist too, and his firm, known as BKSH, is owned by Burson-Marsteller, the enormous P.R. conglomerate chaired by Hillary Clinton's top campaign advisor, Mark Penn.) McCain's campaign manager, Rick Davis, is also a lobbyist, whose client interests in the broadcasting and cable industry overlapped with those represented by Iseman and her firm, Alcalde & Fay. During the off years between presidential elections, Davis collected donations from companies regulated by the Senate Commerce Committee, chaired by his boss McCain, for the amusingly named "Reform Institute," which also paid handsome sinecures to Davis and various other McCain campaign consultants. McCain's chief fundraiser is Tom Loeffler, a prominent lobbyist and former Texas congressman whose clients range from PhRMA to the kingdom of Saudi Arabia.

Much of the reporting on Iseman and McCain in the Times and other media outlets has focused on the communications companies represented by her firm, notably including Cablevision, Univision and Paxson Communications, now called Ion Media. Certainly it is clear that the senator provided consideration to the broadcasting and cable companies that Iseman represented, notably Paxson, in his role overseeing the Federal Communications Commission. Those alleged favors deserve further examination, but there are other areas that should also be scrutinized.

Eight years ago, when McCain's connection with Iseman alarmed his staffers, the most lucrative lobbying contracts won by Alcalde & Fay were with the cruise ship industry. In 2001 alone, Iseman's firm received well over a million dollars from passenger ship companies and interest groups, which include local port authorities in Florida as well as companies such as Carnival Cruises. That year, the International Council of Cruise Lines paid Alcalde & Fay a fee of $990,600, by far the largest amount from a single interest that the firm has earned during the past decade. Iseman herself is a longtime registered lobbyist for Carnival.

It may be just a coincidence that around the same time, McCain became a dedicated sponsor of bills to deregulate the cruise and passenger ship industries, which have been hobbled for decades by protectionism and national security laws. Year after year, he promoted legislation that would have permitted greater freedom for foreign-flag cruise ships to operate in U.S. coastal waters, even while he occasionally scolded the cruise operators for persistent safety problems on their boats. During those years, he became known as the best friend of the port authorities, cruise lines and others seeking to rewrite laws dating back to 1886 that protect American ships from foreign competition.

McCain may well have felt there were principled reasons to change those statutes, but his positions also meshed neatly with the most important group of clients at Iseman's company. The most troubling incident linking the senator and the lobbyist, according to staffers interviewed by the Times, occurred on a February night when McCain and Iseman flew back together on a Paxson corporate jet from Florida to Washington. That evening they had attended a small dinner party at the "Miami-area home of a cruise-line executive," who was raising money for McCain's "reform" presidential campaign.