Oscar's getting old and saggy. Can he remake himself with a few simple tucks, some carefully placed electrodes and a roll of duct tape? 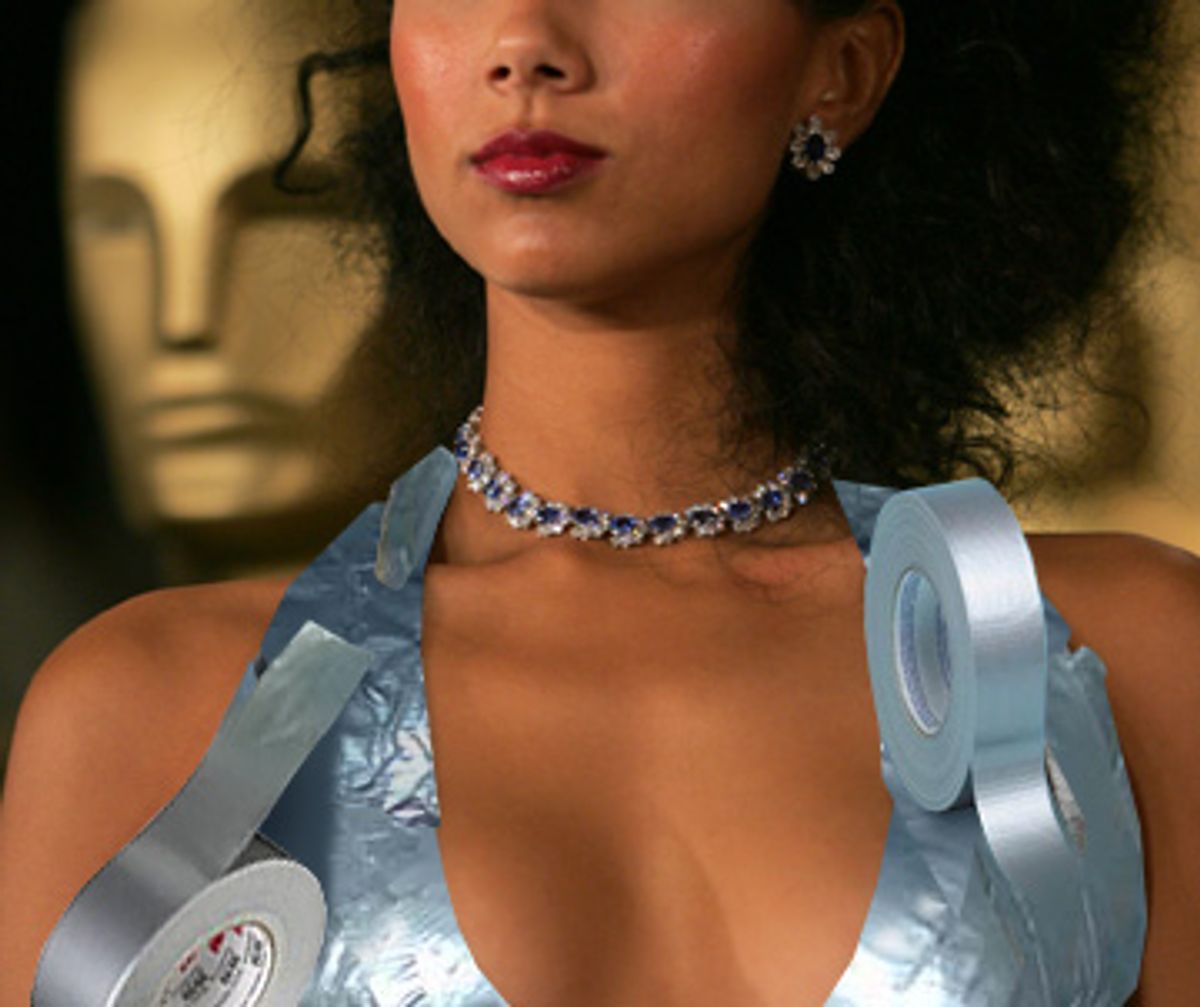 With Hollywood reeling from the recent writers' strike and the country swept up in a downward spiral of deficit and foreclosure, the zeitgeist is screaming out for modesty from this year's Academy Awards ceremony. Alas, we're as likely to see gunnysacks on the red carpet as we are to get a bouquet of daisies from Kim Jong Il. But the lavish display of wealth and self-importance taking place in Los Angeles this Sunday could certainly use a healthy dose of self-criticism. And while there may be lots of navel gazing going on in L.A., it is much more often the result of a complicated Ashtanga yoga position than a thoughtful, critical look at the meaning of the awards spectacle. Many Oscar traditions -- the obligatory necrology montage comes to mind -- passed their freshness date long ago, but continue on in the name of ... well, inertia, we suppose. Here are some suggestions for ways to both spice up the Oscars and make them more relevant to economic realities and current events:

Open the competition to films outside the given calendar year. This would increase competition, which most of us already believe solves all the problems of economics as well as boredom. Imagine what might happen if, for example, a performance from this year had to defend its title against a similar performance from yesteryear -- would "Juno's" Ellen Page beat out Tatum O'Neal in "Paper Moon"? How would Cate Blanchett as Queen Elizabeth fare against ... Cate Blanchett as Queen Elizabeth? Film roles normally become immortal gradually, in a slow, almost subliminal process -- the new rules would raise the stakes so that all-time greatness hung in the balance with the tearing open of each envelope. The battles would be titanic: Streep vs. Hepburn, Burton vs. Nicholson. Another benefit of this new rule would be that famously snubbed directors and roles could compete for something other than the Irving Thalberg Consolation Prize.

Introduce gender equality. Speaking of increasing competition, why, in a world where women are increasingly referred to as "actors," is the nominating process still segregated by sex? Why shouldn't Meryl Streep go up against Jack Nicholson, and Kate Winslet against Robert Duvall, so that one actor alone might have his or her ego pumped to bursting? Moreover, what would Oscar do in the future, when an actor was nominated and then underwent a sex-change operation before the ceremony? Would this person receive the award in the original gender category or in the current one? Of course, this change might only mean that women wouldn't get nominated for acting roles anymore. But they could always direct.

Institute harsh penalties for dishonest speeches. Over the years, the Academy of Motion Picture Arts and Sciences has made a great deal of effort to cut back on the fattiest portion of the show: no, not screenwriters' chins -- acceptance speeches. We applaud these measures, since it's truly excruciating to watch a teary-eyed costume designer gush over the names of her collaborators and hastily improvise some hideous platitude about "art" or "the world" until the orchestra swells up and drowns her out. But it is far worse to hear Hollywood types selling faux humility: "This Oscar is for all the other wonderful nominees." "I didn't expect this at all." "It's an honor just to be nominated!" To help eliminate this phenomenon, remote-controlled electrodes should be connected to the statuettes during all speeches, so that winners who indulge in fake sentiment receive a nasty jolt, and are obligated to recite one of the following, more honest phrases, to appear on the teleprompter: "I have always wanted to beat the stuffing out of Gwyneth Paltrow." "I fired my agent after he made me take this role." "An Oscar? Really? I totally faxed it in." "Suck it up, bitches! Meet my new boyfriend!"

Require that all Oscar attire be made out of duct tape. To increase competition, keep costs down and bring some order to the fashion fracas associated with the run-up to the awards, why not challenge today's top clothing designers to create alluring looks using only duct tape, the way these young prom attendees have? It may be America's favorite adhesive for patching up broken car windows and gagging assault and torture victims, but as those prom photos attest, a little creativity and it's a stunning ball gown! Think what sticky couture Vera Wang or Oscar de la Renta might accomplish, tearing off strips with their teeth. Like "Project Runway" for the pros.

Institute swag cutbacks. The status of valuable free gifts for the taking at the Oscars -- trips, expensive oils, luxury cellphones -- has been in jeopardy for the past couple of years. In 2006, the IRS swooped in to demand that swag get reported as income. At this year's Academy Awards, shrewd companies might consider offering more modest, practical fare: mayonnaise packets often come in handy, as do premoistened wipes, biodegradable plasticware (made from potatoes!), key chains, nail clippers, those foam holders that keep your beer cold and a perennial favorite, the company polo shirt. How about a little embroidered Oscar statuette instead of an alligator?

Create awards for Internet video. Acceptance speeches should improve exponentially under the new harsh system, but if they still need a boost, Oscars must be awarded to the just plain folks whose films are currently more popular than Hollywood fare -- the makers of Internet video. While big studio films aren't making the same astronomical profits, millions of film buffs have seen and enjoyed Internet classics like "Leave Britney Alone" and "2 Girls 1 Cup," even responding with their own cinematic tours de force: "Kermit the Frog Watches 2 Girls 1 Cup," for example. Yet these young auteurs remain relatively unsung. If anyone deserves an Oscar this year, it's those two cup-wielding young ladies. Without five-time loser Kate Winslet to kick around, they've got Most Humiliated Actress all locked up.