The attempted assassination of a U.S. president is seen differently through various people's eyes. Did someone say "Rashomon"? 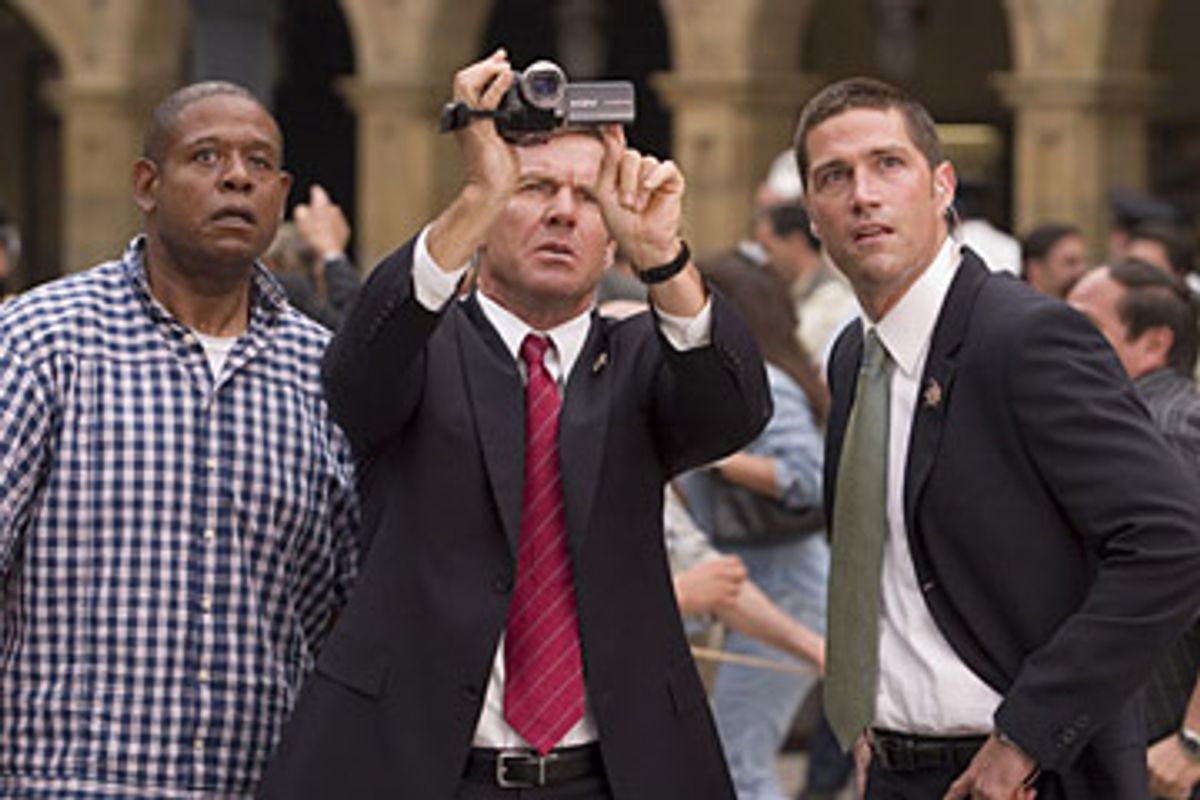 The novelty of Pete Travis' desperately clever "Vantage Point" wears off in about 10.8 minutes: In a crowded city square in Spain, the president of the United States (played by a suitably presidential -- in other words, dull -- William Hurt) is shot just as he's about to participate in a big-deal summit whose aim is to end global terror. As if that weren't bad enough, something even worse happens immediately afterward. This unsettling series of events is reviewed and retold through the eyes of several observers, and their accounts differ, of course, depending on where they were standing and where they were looking at any given second.

Forest Whitaker is a family man who's decided to finally take that European vacation, alone (it's clear there's some trouble at home), and he's planning to capture this historic event on his camcorder for his kids. Dennis Quaid is a Secret Service agent who's back on the job after a long break: He was shot saving the president's life less than a year ago, and the incident still haunts him, leaving him shaky and uncertain. Other, lesser players surface here and there with their own points of view: An American TV producer, played by Sigourney Weaver, watches the action unfold via the multiple cameras she orchestrates as part of her job; a young Spanish policeman (Edgar Ramirez), upset over his troubles with his girlfriend (Ayelet Zurer), views the goings-on through a somewhat cloudy lens of romantic jealousy and confusion.

The idea behind "Vantage Point," if you haven't already guessed, is that no two sets of eyes will ever see an event the same way. In the first section of the movie, Travis slices and dices and recombines the action, first showing us a series of events from one character's point of view, then rewinding them so we can revisit them through another pair of eyes. But even Travis seems to have tired of this novelty fairly quickly: The movie ends up devolving into the usual "Pick three from Column A, two from Column B" car chases and explosions, and Travis even pulls out the grizzled old chestnut of having a small, distraught child run out into traffic and stand there, dumbstruck, as various speeding vehicles bear down upon her. Madre de Dios!

Nearly any story that's told from numerous and differing points of view is automatically, and lazily, described as "Rashomon"-like, as if any old schmo could just put on his Kurosawa suit and become an instant genius. "Vantage Point," whatever Travis' intentions are, isn't so much about how people bring differing perceptions to one event; it's more about how people's eyes can easily deceive them when they're trying to piece together the reality of a situation. Because there is just one reality here, and one character manages to tease it out from key details the other observers have missed. The problem is that by the time he gets to it, we've long stopped caring what the "truth" is.

"Vantage Point" -- its labyrinthine script is by Barry Levy -- strives to be sharp and cerebral. But the story's elaborate plotting only gets flimsier as the picture moves forward. The editing is swift and chaotic, naturally, because we're dealing with swift, chaotic events. (Just once I'd love to see a depiction of chaotic events edited with slow, painstaking precision.) The actors here all seem lost and underused -- although this is a large ensemble, the characters hardly get a chance to react and respond to one another. Quaid works hard to raise those little beads of forehead sweat, but the picture is so chopped up we barely get a chance to see them. Weaver, playing your stock crisp TV professional, is on-screen for all of three or four minutes. Engaging actors like Saäd Taghmaoui, Zoe Saldana and James LeGros skim by in small, underdeveloped roles. "Vantage Point" is less a movie than a halfhearted brainteaser, the kind of thing that seems brilliant when you sketch it out on a cocktail napkin. But putting so many intricate pieces together on-screen is something else again. "Vantage Point" moves fast and even so, it drags, no matter where you're standing.