Eight years after the beer-buddy test gave us W., the guys are going for Obama or McCain, if only to keep Hillary out of the White House. 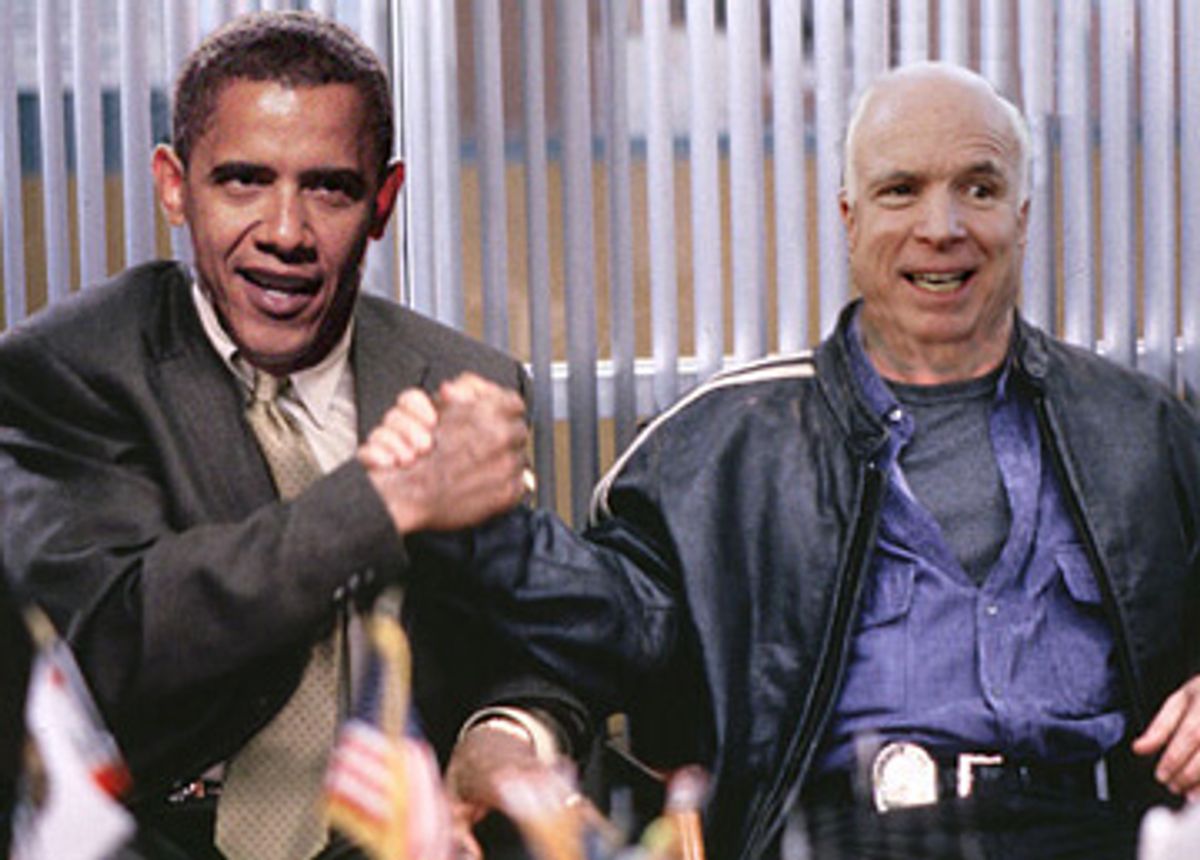 The movies don't get any manlier than buddy cop flicks. They're romances for guys, portrayals of male marriage. Two men with clashing personalities -- the strait-laced family man, the trigger-happy hot shot -- team up to form a crime-fighting force that's more powerful than their individual egos. In the search for opposites, it's amazing how many movies cast a white guy and a black guy. Colin Farrell and Jamie Foxx in "Miami Vice." Tommy Lee Jones and Will Smith in "Men in Black." Mel Gibson and Danny Glover in "Lethal Weapon" I through X.

John Stodder, a 52-year-old blogger from Palos Verdes Peninsula, Calif., looks at the presidential field and sees another buddy-cop pairing: John McCain and Barack Obama, supposed mavericks who break their parties' rules, bound together by a common mission -- keeping Hillary Clinton out of the White House.

"I wish they could run together," Stodder swoons. "They'd be like one of those old 1970s cop shows. The crusty old seen-it-all guy who goes by his gut, partnered with the brilliant rookie who's got courage to match his brains.

"They both seem like leaders to me ... If they end up running against each other, I don't yet know which way I'd go. But if only one of them is in the race, that's the one I'm voting for."

From George Washington to George W. Bush, the Oval Office has been a guy kind of place. Guys are on a 43-0 run. And some guys would apparently like to keep it that way. A recent Associated Press-Ipsos poll found that, among men, McCain beats Clinton by 9 points. Against Obama, he only ties. There are also plenty of guys who voted for Barack Obama in the primaries but will switch to John McCain if the lady gets the nomination -- even though they'll have to leap over a huge political divide to get there. (At the end of 2006, John McCain had a lifetime rating of 83 from the American Conservative Union; Barack Obama pulled an 8.)

In most cases, the Obama-McCain guys don't prefer the male candidates because they explicitly, or consciously, want to keep the presidency an all-male club. But when they talk about McCain and Obama, they bring up characteristics that guys admire in other guys: independence, plain-spokenness, charisma, a willingness to take a stand, an ability to gain the country's respect. They don't object to a woman in the White House, they say. They just object to Hillary. Even though, in this election, that's the same thing.

I met my first Obama-McCain Guy on Super Tuesday, at an Obama rally in Chicago. Paul Farahvar, a 33-year-old lawyer, voted for Obama in the Illinois primary -- "He's a unifying figure. He's got a charisma." But if Obama doesn't win the nomination, Farahvar will switch to McCain. Like those of so many other voters choosing America's Next Top Politician this year, his reasons have more to do with the candidates than the issues.

"I think that having the president we have now, we need someone who can be well-respected," he says. "We need a change from the polarizing politics from the Republican and Democratic sides. If it's Obama vs. McCain, there wouldn't be bickering. I can't vote for Hillary Clinton knowing full well that my country's time and money will be spent demonizing her."

From Obama to McCain is a huge ideological jump, Farahvar realizes.

Farahvar has been raising funds for Obama on the Internet. Recently, he went to a party where he took hundreds of dollars in donations from doctors.

"They've never voted Democratic, but they gave money," he says.

Would they vote for Clinton?

"I don't know any doctors who would vote for Hillary. You talk to them about universal healthcare."

Yet Obama also wants the government involved in healthcare. McCain thinks it should stay private. Obama wants to raise the minimum wage every year. McCain voted to abolish it. Obama wants to bring our troops back from Iraq by 2010. McCain says they may stay another 100 years. Obama is a dovish, big-government liberal who takes the kinds of positions that have earned Democrats the "Mommy Party" label. But he's not suffering for it the way Hillary Clinton is. He's not even suffering the way other male Democrats have. Al Gore was mocked for the fashion consultant who put him in "alpha male" outfits, John Kerry for his sugar-mama wife. Obama is especially popular with men under 45, beating McCain by 7 points.

So, eight years after who-would-you-rather-have-a-beer-with gave us W., some guys are again putting the beer goggles on. They're voting their man-crushes, ideology be damned. Both McCain and Obama cut potent masculine figures. McCain was a fighter pilot who survived five and a half years in a commie prison camp. Obama, tall and deep-voiced, is, as a Clinton aide reportedly put it, "your imaginary hip black friend."

Antonio Campbell, a 42-year-old political science professor at Towson University in Maryland, saw the gender gap in his own classroom: Most of his female students backed Clinton, while his male students split between Obama and McCain. Campbell is a member of Republicans for Obama and crossed party lines to vote for Obama in the Maryland primary. "I listen to Senator Obama, and I have trust that he's going to make the right decisions." He'll cross right back if Clinton is the nominee.

"I think it's going to be very hard for her to win male Reagan Democrats," Campbell says. "There's so much baggage from the Clinton White House. If it would be any other woman that's running for president, I think this race would be over."

Farahvar has the same take as Campbell. "I don't believe that gender played any role in my decision," he says. "I have voted for and worked for Senator Carol Moseley Braun and Congresswoman Jan Schakowsky and would vote for the right woman for president. Just not Hillary."

But of course, no other woman is running for president. No other woman has ever gotten anywhere near this far in the nominating process. Which brings us deep down into the heart of guyness.

Kurt Andersen, the 53-year-old novelist ("Turn of the Century," "Heyday") and media raconteur, is another all-out Obama backer. Andersen has never voted Republican for president, but in a Feb. 4 New York magazine column, he entertained the possibility that he might go for McCain. When I asked him to elaborate, he e-mailed, "I'd be very surprised if I voted for McCain over Clinton; I'd bet against it happening. But I've always admired McCain's relative candor and consistency and non-party-line eclecticism." Hillary Clinton, wrote Andersen, "seems too calculating (her flag-burning vote stuck in my craw) and a bit Nurse Ratchedish."

I think you can ignore every one of Andersen's words except the last two. (The italics are mine.) If you've read "One Flew Over the Cuckoo's Nest" (which was much more explicit in its gender politics than the movie), you'll recall that Nurse Ratched emasculates an entire ward full of mental patients. "She's a nut-cutter," Randle P. McMurphy insists to his milksop companion, Harding. Harding protests, citing "the rich array of charities" the nurse prepares for the poor -- very Hillaryesque. Then he breaks down. "Oh, she is a nut-cutter!" he wails. The patients, he moans, are "victims of a matriarchy."

I understand the thought processes of all these Obama-McCain Guys. In the weeks before Super Tuesday, during my undecided-voter phase, I was an Obama-McCain Guy myself, although I considered my preference pragmatic: I liked Clinton's healthcare plan, but I was worried she'd be stymied by Republicans determined to destroy her presidency.

In December, I sent this e-mail to an Obamaniac friend in Toronto: "Honestly, I'm torn between Obama and McCain. I know that sounds strange, but they're the least partisan candidates in each party. And we could use a little less partisanship in this country. Hillary's got a lot of good ideas, but too many people hate her. It might be fun to watch the Republicans grind their teeth over President Hillary, but it wouldn't be good for the country."

I never said to myself, "I want a man for president." I said to myself, "I want a leader who can unite the country." Like a lot of guys who are about to furtively nod their heads, I think of leadership as a masculine quality, so Obama and McCain seemed like the strongest candidates. I was also leery of Clinton's association with the culture wars -- I don't want to go through that again -- but she was a polarizing first lady because she was given power over healthcare before the nation was ready to see a woman in that role. (In 1994, I walked into a religious bookstore and saw an anti-Clinton biography titled "Big Sister Is Watching You.") Ultimately, it was impossible to separate my reservations about Clinton from the fact that she's a woman.

I also told myself I wasn't dismissing Clinton because I disliked her. I was dismissing her because other people disliked her. That's a popular objection, apparently. According to a CBS-New York Times poll, 81 percent of Americans say they would vote for a woman president; only 56 percent think other people would. But it's also a convenient dodge. If I voted against Clinton because "too many people hate her," wouldn't I just be validating the haters? They are, after all, largely responsible for making her "divisive."

Obama-McCain Guys, I've been where you are. Having a war-hero president sounded romantic, but then I reminded myself that I lost my job in August and I'm shelling out $100 a month for a threadbare healthcare plan. Maybe Obama's $75,000-a-year-earning voters can afford a McCain presidency, but I can't. If Hillary Clinton wins the nomination, I will vote for Hillary Clinton. If you're a Democrat who voted for Obama in the primary and you're thinking of switching to McCain in November, here's some manly advice. I'm a runner, and it's the same advice I give myself when the wind chill is zero, the snow is six inches deep, and I don't feel like running outdoors: Put on your shoes, walk out the door, and suck it up.

'Cause you know McCain's too old for this shit, anyway.