A former Wall Street raider is about to launch the richest fantasy league ever. Ah, the American sporting life. 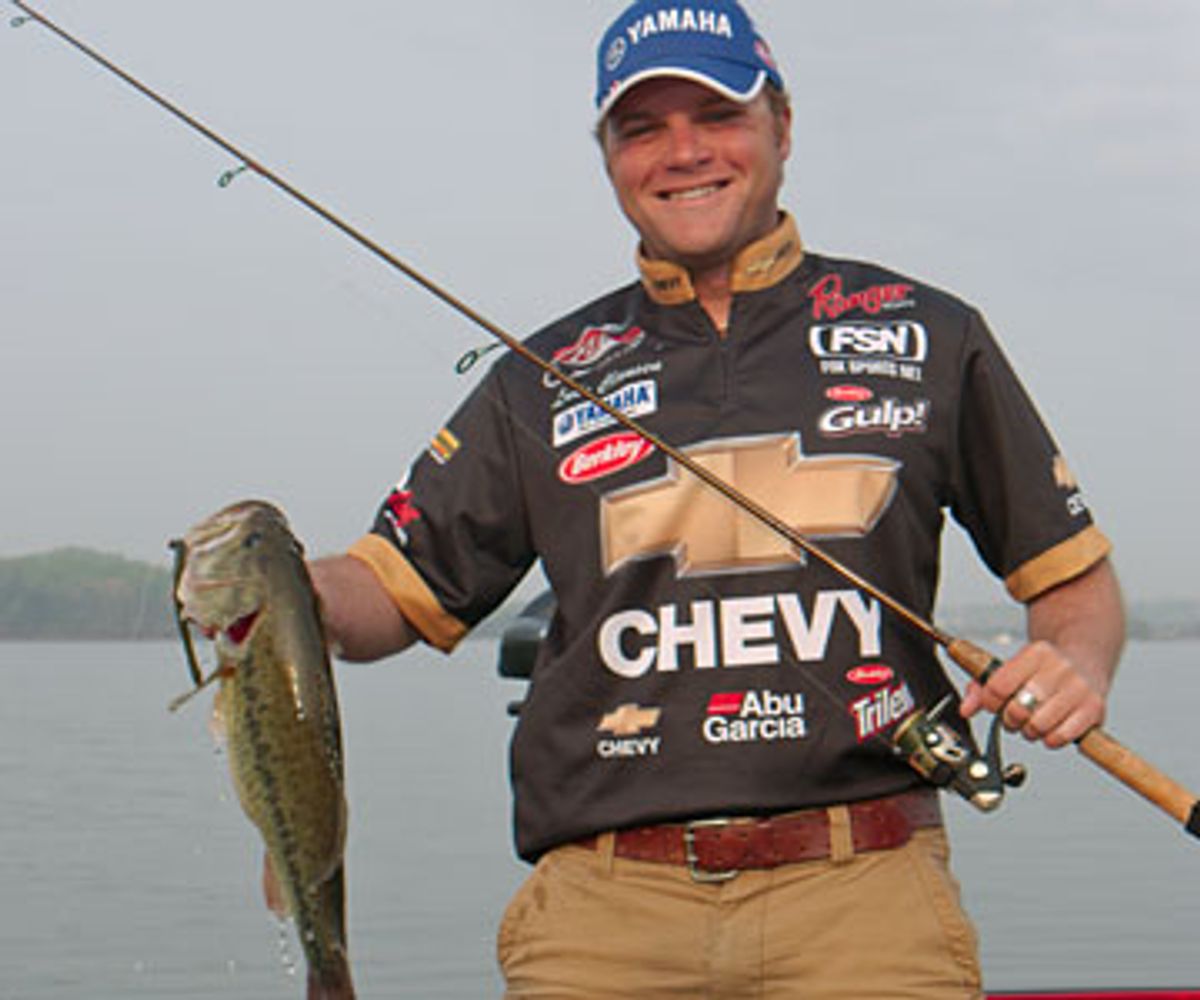 Tampa, Fla., native Kenny Lavallee stands under the desert sun beside former Philadelphia Eagle quarterback and current ESPN football analyst Ron Jaworski, both men smiling for photographers. After one of those stilted, ceremonial handshakes, Kenny lifts an oversize cardboard check over his head and slowly rotates it Vanna White-style for all to see -- $300,000, the first-place prize in the Las Vegas-based World Championship of Fantasy Football (WCOFF), the richest fantasy sports league in the country.

Correction, the second richest. Thursday, Feb. 28, marks the start of a surprising new fantasy league -- in an even more surprising sport -- that will blow away all previous fantasy cash prizes and make the WCOFF look like a quaint little office pool.

Sports fans, fantasy nuts, people who love winning giant piles of money for sitting at a computer -- meet FLW Outdoors Fantasy Fishing. It's the first-ever fantasy sports league to guarantee that somebody will become an actual, totally legit in the eyes of God and the IRS, millionaire. Or even a multimillionaire. FLW is blowing away all previous fantasy leagues by giving away more than $7 million in cash and prizes. Yes, folks, we've officially reached the point in sports history where people can win millions of dollars for watching other people watch out for fish.

As a sports fan, I knew that bass fishing was getting popular. But as an urban Northeasterner, I assumed it was more like early NASCAR -- huge in states whose official flag is the Yosemite Sam "Back Off!" mudflap, but not as popular elsewhere as football, baseball or even hoops. And while this point of view is admittedly myopic, let's be completely honest: What sports fan, above or below the Mason-Dixon line, would have ever believed that a relative, red-headed sports stepchild like pro bass fishing, not über-popular football or thinking man's baseball, would crown the first real millionaire in fantasy sports?

Fantasy fishing works like any fantasy league. After signing up at Fantasy Fishing, you draft 10 real anglers (never call them "fishermen") and accumulate points based on how much bass weight they reel in. Each of six regular-season tournaments awards $100,000 to the highest-scoring participant. The most points in the seventh tournament, the Forrest L. Wood Cup -- the league's "Super Bowl" -- also wins $100,000. And the $1 million grand prize goes to the most cumulative points over all seven events, with an astounding $5 million "Top 7 Exacta Bonus" to any owner who picks the top seven finishers, in exact order, in any one event. Oh, and they're also giving away trucks and ATVs and more. Hey, fantasy leaguers, when was the last time Peyton Manning or Alex Rodriguez won you a friggin' boat?

But the unprecedented riches aren't surprising considering the man behind FLW: Irwin L. Jacobs. Jacobs, 67, was one of the 1980s' most famous (or infamous) Wall Street corporate raiders, a member of the Forbes 400 richest Americans from 1986 to 1988. In 1996, as founder of Minneapolis-based boat maker Genmar Holdings, and fishing event marketer FLW Outdoors, he bought airtime for his FLW tournaments on then fledgling ESPN2. Soon he signed Wal-Mart as the league's original sponsor and dramatically increased event purses. As the rival B.A.S.S. (Bass Angler Sportsmen Society) tour was offering a $50,000 top prize, Jacobs upped his to $150,000, then $250,000, then $500,000, culminating with last year's FLW Cup, where angler Scott Suggs won pro fishing's first-ever $1 million prize.

And Jacobs isn't finished. "I pride myself on not getting paid until I risk the money to make a venture successful," he says. "And once this league -- and fishing -- gets to where I want it to be, my goal is to see the first $10 million fantasy winner."

That said, he's not pretending to be a rod-and-reel Robin Hood. While he does have a) optimism that fantasy fishing will grow the sport's base beyond the 55 million currently licensed anglers, and b) unprecedented financial altruism toward fantasy geeks, he's driven by another "ism": capitalism.

"I want to sell boats," Jacobs candidly admits. "We offer a $500,000 cash bonus to pros who win events on Ranger boats. If I can showcase anglers using our watercraft to win tournaments -- while fantasy anglers win the same amount of money as the pros -- then the average fishing enthusiast might be more inclined to make his next boat a Ranger."

As Jacobs' fellow (albeit fictional) corporate raider Gordon Gekko once said, "Greed ... is good." But it isn't his sole motive. First, the league is free. Second, Jacobs' approach is basic corporate "endors-o-nomics," much like Phil Knight wanting golfers to see Tiger Woods winning events using Nike gear. So everyone wins -- the fantasy player, Jacobs and the folks helping foot the bill. Namely, the FLW sponsors.

The FLW's corporate America who's who of sponsors like Wal-Mart, Proctor & Gamble, Kellogg's, the National Guard and more can now reach a new, broad, diverse consumer base. Tracy King, global operations manager for Castrol, who's kicking in $1.6 million this season, sees fantasy fishing as a new form of nontraditional advertising.

"Every time one of our anglers stops for gas on tour, people see our trucks towing our wrapped boats. This is tremendous grass-roots advertising," says King, who's also a fantasy football fanatic. "With TiVo and the Internet making TV commercials not what they used to be, we had to explore new marketing opportunities, and fishing is a new type of marketing that reaches a diverse, wholesome, family-oriented base of millions of licensed anglers." So family-oriented that the FLW doesn't accept tobacco or alcohol sponsors, a bold stance for a sport whose participants, let's face it, have been known to do some chewing and drinking from time to time.

Not everyone in the fantasy sports world is embracing the "high stakes" business plan, however. ESPN, which runs the B.A.S.S. fantasy fishing games and broadcasts the BASSmaster Classic, won't try to keep up with the Jacobses. "While the FLW is great for the overall market and helps solidify fantasy sports as part of the cultural mainstream, and our bass fishing fans are just as passionate and competitive, we focus more on the community approach," says Raphael Poplock, vice president of games at ESPN. "We serve our fan base through community building and giving fans a place where they can have fun with their competitive nature, talk smack and keep in touch with their friends and family through fantasy leagues. Giving away lots of money isn't our biggest concern."

Fantasy fishing could take some time to lure the casual fantasy fan the way football has. Maybe it's the act of fishing itself? Unlike, say, football players -- powerful, fine-tuned athletes -- the stereotypical fisherman is a sedentary creature dozing off on a dock with a six-pack in his cooler, not his abdomen. But according to the pros, fishing is indeed a physical sport.

"I've got a gym membership specifically to build up my core strength for standing on a boat 12 hours per day," says Brisbane, Australia, native Kim Bain, 28, one of three women on the FLW tour and one of its rising young stars. "I don't sit down. I don't eat. I don't drink. I don't go to the bathroom. I'm dealing with bad weather, rain, sleet, hail, wind.

"Come to think of it," she jokes, "it's not fair that fantasy anglers will win the same amount of money that we will. They're sitting in a comfy lounger in front of their computers at home."

Luke Clausen, 29, another FLW star -- the handsome Spokane, Wash., native has won two $500,000 tournaments and is often called the FLW's Tom Brady -- agrees. "We make about 2,500 casts per tournament day. I missed half the season last year because I had elbow surgery, which is a common problem, along with back and shoulder injuries from the repetitive motion."

And then there's the mental toughness. After four days of practice fishing on a tourney lake (like a PGA golfer playing practice rounds at Augusta leading up to the Masters), an angler devises a strategy to outsmart that lake's gilled residents. But the inability to change strategy on the fly -- think football coach making halftime adjustments -- is deadly. "How the fish are moving, their spawning cycles, or weather and barometric pressure, anything can throw off your practice strategy," Clausen says. "And if you can't 'call an audible' in the real event, so to speak, you could lose hundreds of thousands of dollars."

I'm one of the biggest fantasy football geeks I know. I once even quit a perfectly good job in advertising to concentrate on my fantasy football team full time in a pathetic quest to win my league's paltry cash prize. But for a million bucks or more? I don't care if it's fantasy camel racing, you can sign me up. And whether you think pro bass fishing is the new NASCAR or not a sport, there's no arguing that with a shot at millions for sitting in front of a computer and, well, not fishing, Jacobs is certain to net a massive school of new fantasy sports fans.

Mark St. Amant is the author of "Committed: Confessions of a Fantasy Football Junkie" and "Just Kick It: Tales of an Underdog, Over-Age, Out-of-Place Semi-Pro Football Player." He is also the fantasy football writer for the New York Times' "Fifth Down" football blog.