"The Other Boleyn Girl" 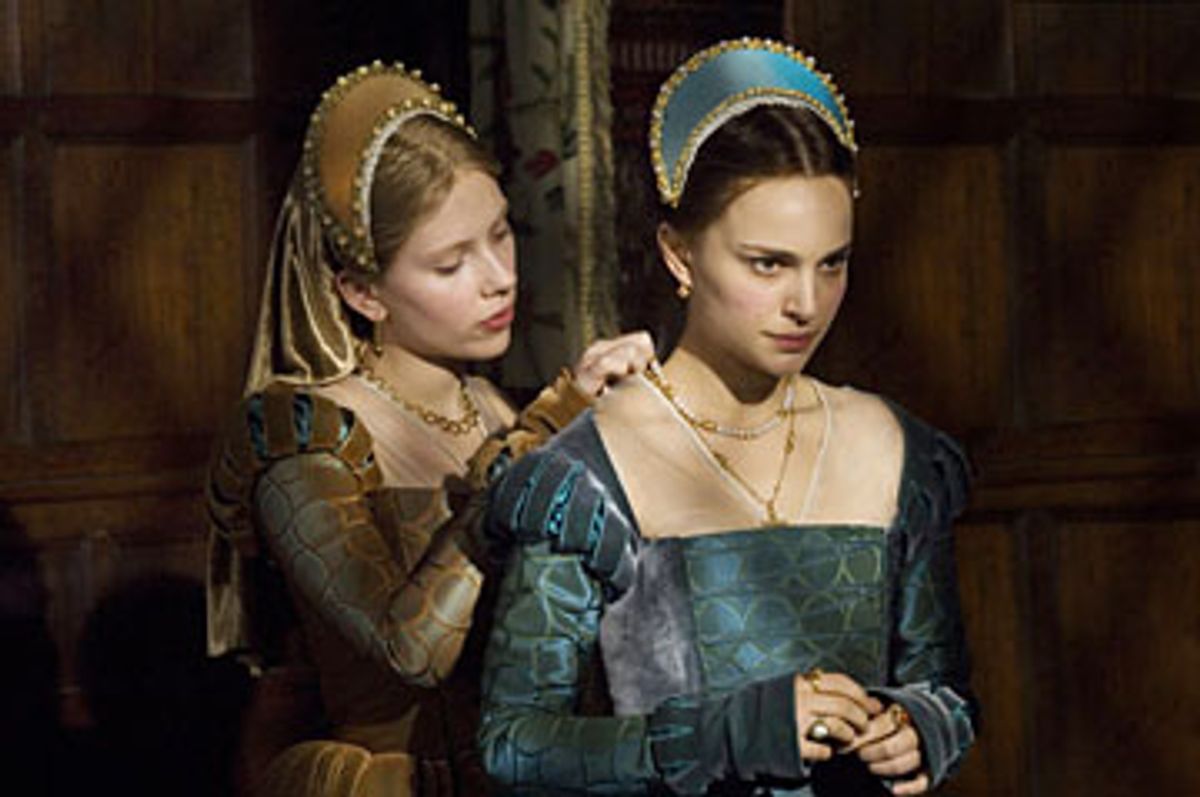 Justin Chadwick's "The Other Boleyn Girl" should have everything going for it: Based on Philippa Gregory's novel about ambition, betrayal and sibling rivalry in the court of Henry VIII, it was adapted by Peter Morgan, who, as writer of "The Queen," sure knows his way around a scepter. It's got two comely and intuitive actresses, Natalie Portman and Scarlett Johansson, to fill out all those gilt Tudor bodices. And, shot by Kieran McGuigan with high-definition cameras, it's as classy-looking as a signet ring -- Hans Holbein would have given his left nut to capture the interplay of light and shadow on individual hairs of velvet the way McGuigan does.

All that perfection and not a drop of blood in sight, literally or figuratively: "The Other Boleyn Girl" is the most sterile of bodice-rippers, a genteel soap opera in which the sex and intrigue are so muted, so tasteful, that they practically blow off the screen in a scattering of dust. There's a fair amount of sex in "The Other Boleyn Girl," though it's mostly the soft-focus kind. Portman and Johansson play Anne and Mary Boleyn, sisters who are pimped out by their father, Sir Thomas Boleyn (Mark Rylance), to the court of King Henry (Eric Bana). Sir Thomas and his brother-in-law, the oily Duke of Norfolk (played by a correspondingly slippery David Morrissey), suspect that Henry, disgruntled that his wife, Katherine (played, with self-possessed grandeur, by the Spanish actress Ana Torrent who, as a child, made her mark in Carlos Saura's "Cria!" and Victor Erice's "The Spirit of the Beehive"), hasn't conceived a son, will soon be hunting around for a mistress. Their first idea is to offer the bold, saucy firecracker Anne. Upon meeting her, Henry is momentarily intrigued, but she's too much of a handful, even for him. Instead he fixates on Mary, the sweet, gentle sister -- it doesn't matter that she's already married (to a milquetoasty merchant played by Benedict Cumberbatch). Together, Henry and Mary conceive a son, but it's not long before Henry's eye is wandering again, this time back to Anne: After an imprudent secret marriage, she's been packed off to France, where supposedly her brazen manner has been toned down. Now she's back, and Henry seems to like her much better, although in the movie's terms, it's impossible to figure out why: The allegedly new, improved Anne is even more overtly aggressive and scheming than the old one.

In places Chadwick -- who directed the marvelous adaptation of "Bleak House," starring Gillian Anderson, that aired on PBS a few years back -- seems to be trying to give us a dishy soaper. But the picture struggles under the weight of its tasteful, semi-historical trappings. The costumes don't always help, either: While I'm as much a sucker for swags of brocade and satin as the next girl -- and I nearly always admire the work done by the movie's costume designer, Sandy Powell -- I couldn't help giggling every time Bana swaggered into the frame in his bejeweled Nolan Miller-style shoulder pads.

Then again, I usually can't help groaning when I see Eric Bana: Even though we're all used to a fat Henry VIII, I could probably forgive Bana for his ripped torso (which is, incidentally, briefly on display here). What I can't forgive is his recurring dullness (I always want to add an "l" at the end of the name). Bana plays Henry as an arrogant stallion -- he's less like a king than like the entitled young bozos on Wall Street who feel it's their duty to look a woman up and down appraisingly when she walks into a room. I like the idea of a sexy, seductive Henry VIII, but Bana is just a cutout pinup. (Philip Seymour Hoffman could have been 100 times sexier playing this role in his bathrobe.)

"The Other Boleyn Girl" feels, paradoxically, as if it's been both labored over and slapped together: Characters appear and disappear without explanation. Sometimes they utter lines like "There have been ... improper intimacies!" with perfectly straight faces. There are some believable touches here and there: Kristin Scott Thomas, as Lady Elizabeth Boleyn, is extremely sympathetic as she wrings her hands over the fate of her daughters (and that of her son, played by Jim Sturgess, who has it almost as rough as the girls do).

At the very least, looking at the two lead actresses is enough to keep us awake: Portman is a bit too stiff and remote. She should be allowed to have more fun, to really cut loose as the "bad gal" sibling. But she does have ample opportunity to flash that predatory, pussycat smile. Johansson has it harder, in a way, playing the suffering, noble beauty. But she's smart enough to know that she's playing a person, not a bunch of dull character traits (kindness, good sense, generosity). That's why you feel something for her when, right after giving birth to Henry's son, she beckons the king through a half-open doorway to step in and have a look. He practically grunts as he turns away from her, and her face -- only seconds ago, she was beaming -- takes on the somber quality of a closed morning glory. In what asylum did they hatch the idea of casting Scarlett Johansson as a wallflower? In "The Other Boleyn Girl" that lunacy is called good taste.